I still haven't gotten around to really telling people about this blog of mine, but I may as well write another post. Well, actually, I'm cheating a bit: I'm just going to revise a review I already wrote and submitted to the Fear Is a Man's Best Friend website. If the name of the page didn't clue you in, I'm talking about ol' John Cale, former bassist, violist, and organist for the Velvet Underground, producer of Nico, Squeeze, Siouxsie & the Banshees, the Modern Lovers, the Stooges, and others, collaborator with Brian Eno (effectively the god of music, or rather patron saint if that suits your tastes better), and veteran of 37 years of a solo career. So, here we go:

While studying abroad in Vienna, I happened to see a placard for this concert and I knew I had to go. My sister Meredith was in town that week, so we went together. We figured that I was probably the youngest person in attendance, but that hardly affected my enjoyment of the show, which I thought was rather awesome. There was no opening act, and the medium-sized venue (a former slaughterhouse, I'm told) was fairly crowded and anxious for the show to begin. After a long wait, a loud drone enveloped the building, and finally the band walked out. After the intro drone, the band started out in full-on rock mode: Cale on electric guitar, accompanied by three guys I didn't recognize on lead guitar, electric bass, and full drumset. I don't remember the setlist exactly, and I'm unfortunately still in the process of becoming familiar with all of Cale's material, so I can only guess at an approximate order and the precise content. [Edit: I have since found the correct setlist.] I think I remember five rocking songs before Cale moved over to the keyboard for the first time. The setlist was fairly varied. Cale focuses on his heyday, the mid 70s, but he threw in songs from all over his career (but sadly just one Velvet Underground song). I'll comment on a few specific parts.

Cale played two new, unreleased songs: "(A Day in the Life of a) Common Cold" and "Hey Ray". "Common Cold" I remember as fairly good, but despite the thorough introduction that "Hey Ray" got, I have to say it was the song I was least impressed with the whole night. The lilting lyrical delivery and choruses ticking off the years just didn't strike me strongly. I picked up on most of the cultural or historical references he was making in the song, but I just didn't like the way it coalesced. The other song that I felt didn't work too well was "Heartbreak Hotel", an Elvis Presley cover that normally rocks really hard both on album and in most live bootleg versions I've heard. This time, through, the song featured dense keyboards and such a strong pitch shifter on Cale's voice that I couldn't understand the lyrics and I wasn't even sure exactly what song it was. I think if the effect hadn't been quite so strong it would have worked really well.

About halfway through Cale started playing some of his more melodic old classics, such as "Big White Cloud", "Ghost Story", "You Know More Than I Know", and "Cable Hogue" (apparently referred to these days as "The Ballad of Cable Hogue"). These four in particular earned some serious applause from the audience. After setting down his electric guitar after the first five songs, Cale tended to favor his acoustic guitar and keyboard most the rest of the night. For about four or so of the various softer songs, the drummer came around to the front of his set for a while and sat down on a box [Edit 2019.01.07: specifically, a cajón]. It was well-mic'd and he knew what he was doing, because he kept a solid beat going just by beating on it the whole while. I was impressed by the effectiveness of the simplicity. Now and then the bassist would also trade his electric for an acoustic stand-up.

I had noticed at the start of the show that I didn't see a viola anywhere on stage, and I told my sister that I just knew Cale would have to bring one out. Sure enough, right before the encore, he pulled his viola out from behind an amplifier or something and went right into "Venus in Furs". Some of the audience members really got into it, despite the fact that it's not an easy song to dance to. Anyway, that was pretty cool.

After Cale left the stage, the audience kept cheering until he came back out for an encore. He went right into "Fear Is a Man's Best Friend", which got a great crowd response. (As it's one of my favorites, too, I was rather enthralled.) He followed the first chorus with a classical-styled interlude not present in the studio recording, and the bassist did a good job of capturing the noisy finish of the song as heard on record. They then rocked through a medley of "Pablo Picasso" (a Modern Lovers cover) and "Mary Lou", which featured some extended jamming. After that, the band left the stage, the audience applauded, and the lights came on, so me and my sister figured the show was over. She went to the bathroom and I went to pick up my camera, which had been confiscated at the door. While waiting for my sister, Cale came back out to do "Chorale", so I not only got to hear the beautiful finale, but I got to take a few blurry photographs. After that, my sister and I left for good, but for all I know he did another encore. I wouldn't put it past him, but I'm pretty sure that was the end, as I heard a loud drone much like the intro one as we left. All in all, it was a pretty great show. For the sake of public record, here is the better of the two photographs I took, but I warn that it really is not a great shot: 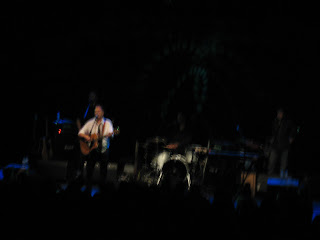 Thanks for writing this.

My pleasure! I hope you enjoyed it. I wish I could remember the setlist better, though!