The Chameleons are a frustrating band at times, mostly due to their difficult discography. I say this because they've only ever released four albums of original material, yet there are at least sixteen assorted "other" full-length releases, some of which even span two discs. For a fairly short-lived band that only released about 60 unique songs, that's quite a feat. They've complicated their catalog with an endless stream of compilations, live albums, acoustic re-recordings, and archival releases of demos, outtakes, b-sides, and radio sessions. Plus, most of these extraneous albums were printed in very limited quantities, making them hard to find and expensive to purchase. The recent reissue campaign has only added more material to the mix.

Last week they reissued their only album of original material released during their reunion, Why Call It Anything, and an apparently new collection of assorted rarities, Dreams in Celluloid. I felt compelled to share my thoughts and analysis of these albums because there isn't much information available anywhere else on what they actually contain. I'll discuss Why Call It Anything first. 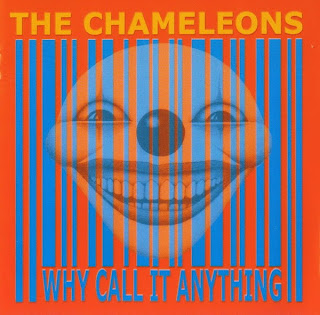 [Why Call It Anything (original release): not Reg Smithies' best album art.] 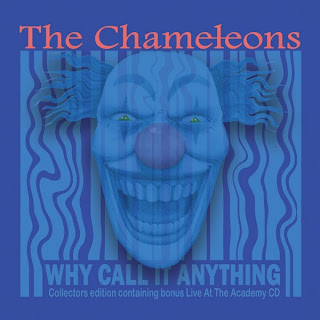 [Why Call It Anything (2013 reissue): not an improvement over the original artwork.]

Why Call It Anything is a strange album. It was released in 2001, one year after the band reunited to release an album of acoustic re-recordings of their old material (Strip). It clearly sounds like the Chameleons, but it feels more direct, less dreamy and abstract. The songs have simpler arrangements, less dynamic range, and less subtlety. However, the album does pack some power, and the songs are surprisingly catchy. It's not a great album, but certainly a good one, especially for a band reunited after a 13-year hiatus.

This reissue is ever stranger. It claims to be remastered but after examining the waveforms the only difference is slight compression and amplification (see loudness war). It also contains a second bonus disc supposedly containing the 2002 album Live at the Academy. However, that album was originally a two-disc release totaling 18 tracks, whereas this single disc houses just 13 tracks. No mention of these excisions is made. Supposedly, this disc is also remastered, but it sounds nearly identical to the original release, barring the familiar compression and amplification and the presence of less audience noise before and after the songs. The live performances are good, but what happened to "Pleasure and Pain", "Seriocity", "Soul in Isolation", "Splitting in Two", and "Tears"? And why does every live album released by a reunited band seem rather redundant after listening to their original live tapes? 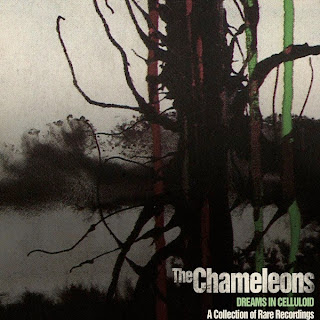 Anyone familiar with the Chameleons' back-catalog can't help but notice that the first disc of Dreams in Celluloid looks a lot like The Fan and the Bellows (1986) and Dali's Picture (1993), two previous collections of early material. Any suspicions of redundancy will be immediately confirmed by a simple listening test or waveform comparison. Of course, the Chameleons have a long history of hiding their details, so it is extremely difficult to know for sure exactly what is what. Nonetheless, I will do my best to determine what exactly is to be found on Dreams in Celluloid. First, I will examine these earlier releases by the band.

Supposedly, "Dali's Picture is the original demo album the band cut and sent out to various labels" (source). The recordings are somewhat raw and there are few overdubs, so this is easy to believe. It is not easy to know exactly when these recordings where made or even who drummed on them – Brian Schofield was the band's first drummer, present for their first John Peel session in June 1981, but replaced by John Lever sometime between then and the December 1981 recording sessions with Steve Lillywhite for their first single ("In Shreds"). I suspect that Dali's Picture was recorded between those two events, most likely with John Lever, for the following reasons. Peel invited the band to his show on the strength of a demo, but that demo supposedly was a rehearsal recording before the band had found a drummer (according to George Gimarc's Post Punk Diary). Schofield's name appears only in the credits for the Here Today, Gone Tomorrow and John Peel Sessions collections and nowhere else in their catalog, and although that could just be revisionist history, the drumming on Dali's Picture does sound a lot like Lever's style. This is easy to hear by comparing the drumming arrangements on the songs recorded for both the Dali's Picture demos and the Lillywhite sessions.

The Fan and the Bellows was apparently originally an unauthorized release that was almost immediately blocked by the band, but it was then released in several countries on multiple labels anyway, so perhaps the band acquiesced in the end. Thankfully, someone bothered to print the copyright years and production details on the album sleeve (see here). The first half of the album contains the four tracks recorded with Lillywhite ("In Shreds", "Less Than Human", "Nostalgia", and "The Fan and the Bellows"), a 7" edit of "Nostalgia", and "Prisoners of the Sun", the 1983 b-side of "Up the Down Escalator". "In Shreds" would become the band's first single, released in March 1982 and backed with "Less Than Human". "In Shreds" would later be re-issued in 1985, backed by "Nostalgia"; both tracks were appended to the CD release of their second album, What Does Anything Mean? Basically (1985).

The second half of The Fan and the Bellows appear to be demos from 1981, produced only by the band themselves. A quick check identifies "Every Day I'm Crucified" and "Love Is" as duplicates of the material on Dali's Picture, but mastered slightly differently. (The main difference is just less tape hiss.) "Endlessly Falling", "Turn to the Vices", and "Nathan's Phase" sound like they came from the same sessions but have been otherwise unreleased. 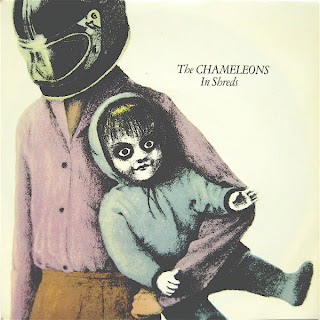 ["In Shreds" 1982 Epic single. Artwork later reused for The Fan and the Bellows.] 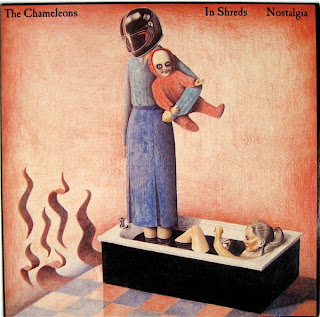 Why is any of this important? Well, Dreams in Celluloid contains next to nothing when it comes to liner notes and details, so careful comparison with these past releases is necessary to figure out what is actually present on this new collection. It turns out that everything on the first disc of Dreams in Celluloid was previously released on one of these two prior compilations, and sometimes on both. Here's the breakdown:

However, don't get too optimistic: there are just a few tracks from both The Fan and the Bellows and Dali's Picture that are not to be found on Dreams in Celluloid and are otherwise difficult to find. The Fan and the Bellows contains the only released version of "Endlessly Falling" as well as the 7" edit of "Nostalgia", originally released as the b-side of Statik's 1985 "In Shreds" 7" single. Dali's Picture contains otherwise unavailable demos of "The Fan and the Bellows", "Less Than Human", "Monkeyland", and "Nostalgia". Note that any of these titles mentioned above that appear on Script of the Bridge (1983) or the vinyl release of What Does Anything Mean? Basically (1985) are later re-recordings.

Lest you think that this is all of the original studio ephemera from the early days of the Chameleons, you would be wrong. A rare early recording of "Here Today" (different than the version found on Script of the Bridge) can only be found on the 1982 Statik compilation Your Secret's Safe with Us. Two other early recordings, "Dear Dead Days" and "Things I Wish I'd Said", apparently recorded in 1981 with early drummer Brian Schofield (source), can only be found on the rare Here Today, Gone Tomorrow (1992) and the 2008 reissue of Script of the Bridge. Both albums also contain an alternate version of "In Shreds", perhaps recorded in 1983. No further information is available for these three rarities.

At any rate, the Lillywhite session tracks are quite good ("Nostalgia" is one of my favorite songs), "Prisoners of the Sun" is a decent instrumental, and the rest of the demos are nothing special but of some interest in terms of offering witness to the band's development. Dreams in Celluloid does cover the best material from this period, but it is sadly incomplete. 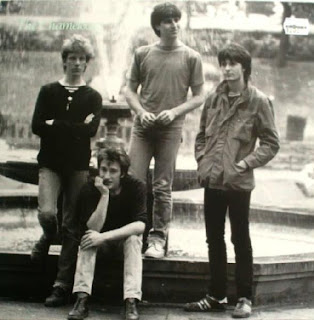 Enough about the first disc of Dreams in Celluloid. Thankfully, the second disc is pretty simple: it's just a reissue of the treasured Tony Fletcher Walked on Water EP, recorded in 1987 right before the band broke up, halfway released in 1990 by singer/bassist Mark Burgess before being blocked by guitarist Dave Fielding. These four songs have also been released on Northern Songs (1994) and some editions of Return of the Roughnecks (1997). The EP has always been hard to find and it is unclear to me why anyone in the band would want to hide it. Simply put, it's amazing and stands up exceedingly well as a strong follow-up to Strange Times (1986). Each of the four songs continues the dreamy, powerful, melodic trend brought to the fore on the preceding album. There isn't a weak second on the whole thing.

Conclusion:
Both of these new releases are frustrating due to their incompleteness – they offer some good material, but at the cost of skipping over a few tracks that somehow got left behind and thus remain obscure and expensive to find. The remastering job on all the material is slight and perhaps even a downgrade due to loss of dynamic range. I'm at least happy that most of this material is finally in print again, especially the Tony Fletcher EP, but I'm disappointed that these collections are incomplete and offer nothing previously unreleased. (Even the cover art of Dreams in Celluloid, which I originally assumed to be a new work by Dave Fielding, was previously used in part for the "Singing Rule Britannia (While the Walls Close In)" single.) 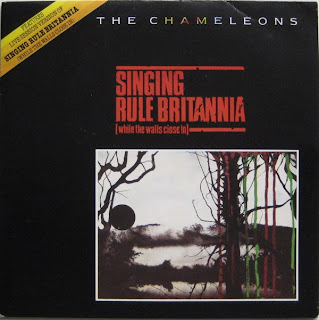 ["Singing Rule Britannia (While the Walls Close In)" single.]

P.S. Both Here Today, Gone Tomorrow and John Peel Sessions remain mostly overlooked in the Chameleons reissue campaign over the past five years. While the former is scattershot and only occasionally interesting, the latter is a fantastic collection of very high-quality performances.