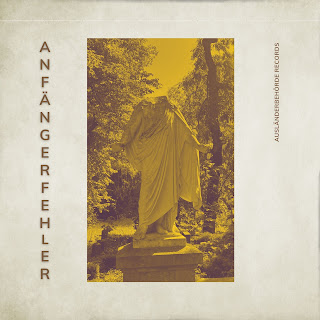 Check out this new EP from Anfängerfehler! This is Tim Howard of Soltero’s German-language project. The name translates to “beginner’s mistake(s)”, alluding to Tim’s journey of learning German. The EP features three lovely, carefully produced songs full of wistful atmosphere and subtle wit. It’s a pleasant listen even if you can’t understand the words, but all the better if you do. I can’t claim any credit for the recordings, but I played these three songs live with Tim at the Soltero show back in March. Sooner or later we’ll get another chance to present them to you in person, but until then, enjoy the EP! 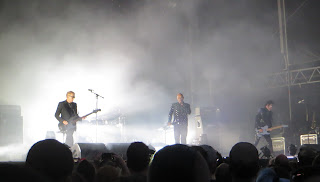 [Bauhaus.]
Finally. I finally saw Bauhaus. They are one of the first bands I got into as a young person that I still enjoy today; I bought Gotham in 2002. And 20 years later, I finally got to see them live. Apparently, I got really lucky, because they’ve canceled their North American tour dates due to Peter Murphy entering rehab.

But first was Hope, a local Berlin band. They played a very sparse and minimal take on darkwave. Maybe I could even call it goth rock, but it didn’t really rock. The guitarist’s tone was very much in the spirit of Daniel Ash, albeit even more reliant on heavy effects and atmosphere over riffs or chords. I don’t think there was a single song that had something I’d label a “solo”. The musicianship was good, but it was so vague that I found it rather unexciting. The last song finally broke out of the mold and really picked up some steam as the vocalist repeated “don’t touch me”. That was powerful. But of the rest I can hardly remember anything. 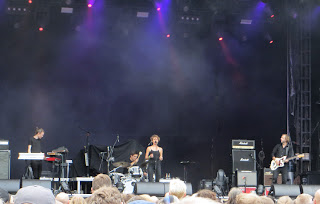 Bauhaus took their time coming out to the stage, and I hadn’t expected an opening band, so I (and seemingly most of the crowd) were a bit impatient. The lights eventually dropped and a loud drone could be heard, akin to Ash’s guitar buzz at the start of “Dark Entries”, but alas, that was just a tape, and it went on for something like 15 minutes. It seemed like some sort of endurance test!

When they finally did come out, the used their typically stark and theatrical white lighting and thick fog machines to play with the shadows. David J wore his typical attire of a suit and sunglasses. Ash had a sort of wild mohawk and flamboyant boas over sparkling clothes. Peter Murphy looked like royalty, with a bald head, a sparkling polka dot shirt, and a freaking scepter. Kevin Haskins was the only one who seemed remarkably conventional, and he quietly took his spot behind the kit. Murphy immediately owned the stage and exuded a commanding presence. Ash tried to showboat some, but it didn’t work the same, and his somewhat more macho energy didn’t quite match the vibe. (Nor did it distract.)

Their choice of opener, “Rosegarden Funeral of Sores”, was perhaps unexpected, but from there they ran through the superb opening triple salvo from In the Flat Field (1980). I wondered if they were going to do the whole album, much as Murphy and J did on their joint 2018 tour, which I caught in Berlin. Thankfully, they diverged, although they still did “Spy in the Cab”, one of their weakest songs, for reasons I cannot fathom. In fact, the setlists were quite similar, just rearranged. The duo actually played more songs in 2018, although mostly just the rest of the album. Only “Dark Entries” (which ironically was the set closer) and “Sister Midnight” were unique to this. Apparently “All We Ever Wanted Was Everything” was on the setlist as second encore, and I even saw a stagehand bring out an acoustic guitar, but the band did not return to play it. That would’ve been such a delight!

Other than the new cover, they really didn’t take any risks. The vibe was familiar, the songs were the same, and the staging was unchanged. I don’t blame them for not playing their one new recording, “Drink the New Wine”, since it was an exquisite corpse-style studio creation, but their catalog is quite varied. They had a few extra instruments and tricks (mostly just things for Murphy to jam on during instrumentals like the dubby outro of “She’s in Parties”), but they also relied on a few samples. That wasn’t particularly distracting, but it occurred to me that the noise running through “Adrenalin” is one of its defining features. It’s an unusually static song for the band. There’s just one sound the whole way through with hardly any dynamics. Considering that it was the only song from their last album (Go Away White, 2008) that they played, it felt like an incongruous choice.

But what can I say? They’re still really powerful on stage. You can hardly tell their age. Murphy’s voice has gotten better over time, if anything. They weren’t as tight as they could’ve been, but they certainly weren’t loose, and I’d still say they nailed the songs across the board. They’ve got their shtick figured out. Even if it is predictable, it’s thoroughly enjoyable.

P.S. In my last post, I griped about my recent concertgoing experiences and openly wondered if seeing live music was going to continue to be a pleasurable hobby for me. I’m happy to say this concert was a refreshing return to something akin to “normal”. I still got pushed around and smoked upon more than I’d like, but generally people were much more chill and respectful. It probably helped that it was at an awesome venue (It’s a medieval fortress! With bats at sunset! I still can’t get over that!) and it wasn’t nearly as crowded as the Patti Smith show in June at the same venue. I wonder if the overwhelming countercultural orientation of the crowd had an impact. At any rate, it’s always fun to admire the goth fashions! 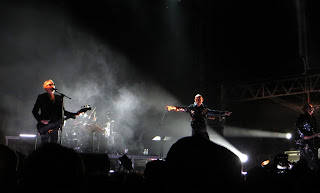