I almost didn't buy the brand new Peter Murphy album, Lion. Murphy is a little past his prime and I'm tired of his occasionally ridiculous arrogance ("I just think I'm out of place, really. I'm like Bowie, Iggy, Frank Sinatra, Elvis all rolled into one"; quoted from here). It doesn't help that his increasingly esoteric interests make him a tough figure to follow, although his continual willingness to follow unexpected paths does mean that you never know when he'll surprise you with an amazing song. Since tickets for the show were surprisingly reasonable ($25), I decided to give the album and the show a chance.

The show started early (7pm) but featured two opening acts that I was curious about, so I decided it would be worth it to be timely. I assume the fact that the Belmont is an outdoor venue downtown was the reason that the show was scheduled to be done by 10:30pm, although I can hardly complain, since I had to get up early for work the next morning regardless of set times. My punctuality was rewarded with a good spot on a balcony overlooking the side of the stage. I may have suffered some sound quality loss, but the clear and close-up view was worth it.

The Boxing Lesson opened the show; they are a local group that are not appearing on other dates of Peter Murphy's tour. The band is a rock trio of guitarist/singer Paul Waclawsky, synthesist Jaylinn Davidson, and drummer Dancing Eagle. Waclawsky was quite good, even if his singing wasn't particularly notable and his guitarwork was a bit indulgent, but the highlight was Davidson, whose keyboard deck produced the primary colors of the soundscapes. She held down the bass parts while also alternating between rhythm and lead parts. The band had a big sound, a little haunted, a little heavy, but never nihilistic or dreary. In fact, it felt somewhat bright and upbeat, despite the dark vibes. I enjoyed the performance quite a bit. 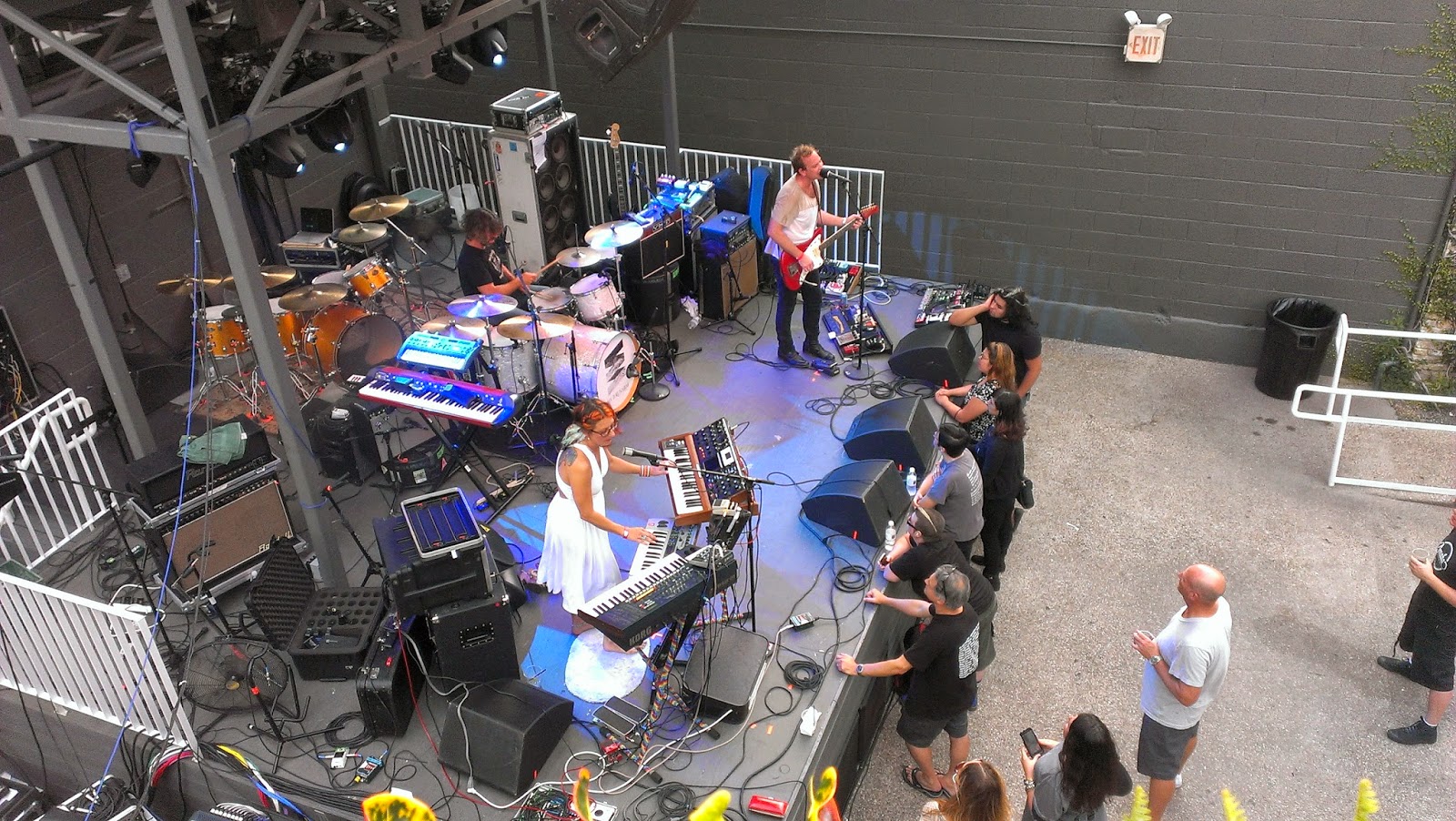 My Jerusalem came next; they are the regular openers for this tour, although they are also based out of Austin. Their sound was fairly conventional rock, in the direction of the generic, pseudo-"alternative" bands of the late 90s and early 00s. Some of the musicianship was good, particularly from the lead guitarist/keyboardist, but I found the style to be unconvincing. The music was monotonous and their lyrics mundane. At least they could rock with some energy. 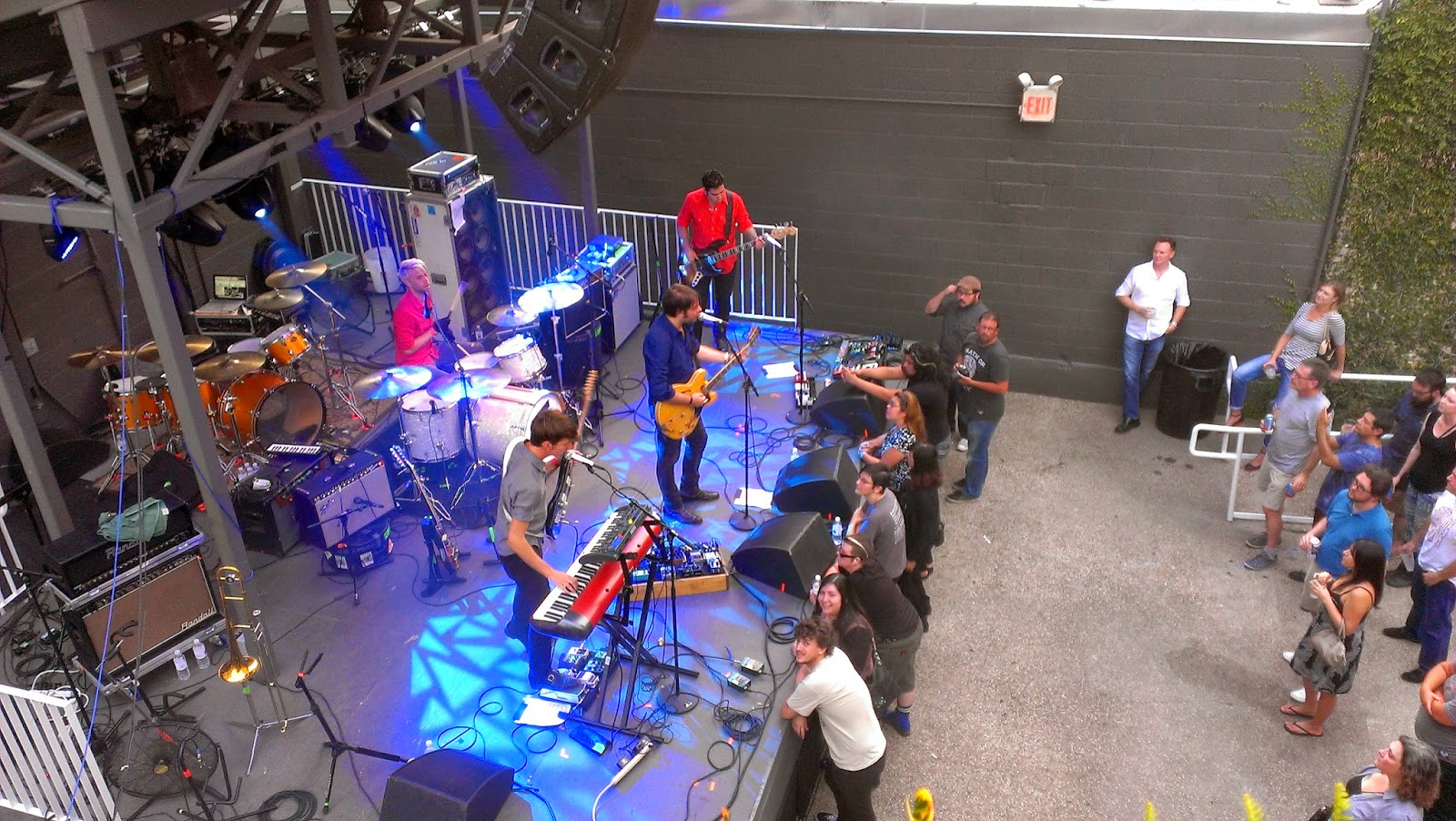 When Peter Murphy came on stage, he was accompanied by new guitarist Andee Blacksugar, bassist/violinist Emilio DiZefalo-China, and drummer Nick Lucero. They unsurprisingly started with the opening track of the new album, but this was followed by the relatively obscure "Low Room" from 1992's Holy Smoke. The core of the setlist came from Lion and its predecessor, Ninth (2011) – this is hardly a nostalgia trip or a run-through of the greatest hits. Murphy played a mere two Bauhaus songs and just three other songs from his career before Ninth, all from Deep (1989), his most popular album. 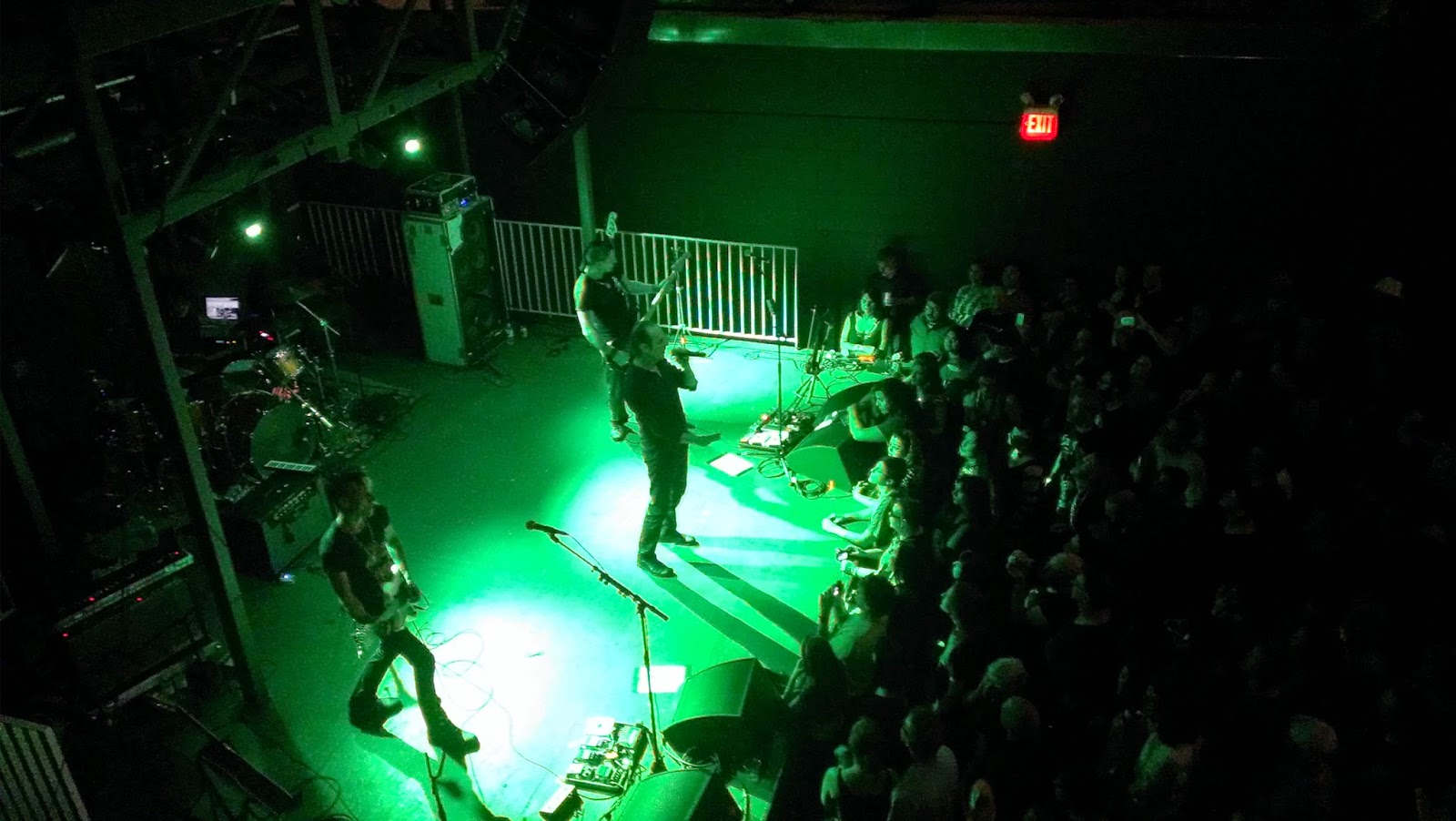 Actually, I was quite surprised by how little time Murphy spent looking back. When I saw him in Hannoverin 2009, he was amidst his Secret Covers tour, but spent most of the setlist either previewing material eventually to be released on Ninth or reaching around the corners of his back catalog. I liked the variety, even if some of the choices were misfires. This time, though, I found myself wondering if he'd ever do a favor for fans of Cascade (1995). I suppose a nod to the 2012 In Glad Aloneness EP by Dali's Car was totally out of the question.

I think both of the most recent albums are decidedly okay; they are far from bad, but also aren't exactly top-notch, either. They are decent works from an aging alternative artist that isn't ready to fade from view. Thankfully, the live band does a great job bringing these songs to the stage, where they are able to keep most of the strengths of the studio versions and add a bit more live energy, even if some nuance is lost. Murphy did rely on some backing tracks, but fewer than I remembered him using the last time I saw him.

It was hard not to wonder why Murphy was skipping most of his hits and singalongs. Obviously, "A Strange Kind of Love" and "Cuts You Up" were quite welcome inclusions, but other than those and the Bauhaus songs, he was aiming for the dedicated fan. He even played a b-side from The Secret Bees of Ninth EP (2011), "Gaslit", which conveniently happens to be the best track from the EP. But Murphy has a history reaching back to the title track of the debut album by Bauhaus, In the Flat Field, in which he tends to write songs with short, simple choruses but long, wordy verses. It's his normal style of songwriting, and it usually works fine, but it does make the songs very hard to sing along to!

The highlights of the show were basically any time that the band broke out of the normal electric guitar-based rock mode. Hence, the rather atmospheric "Gaslit" stood out, as did both "A Strange Kind of Love" and "Cuts You Up", both of which featured Murphy on an acoustic 12-string guitar. The former also gave DiZefalo-China a chance to use his violin for the lead parts. Both Bauhaus cuts were excellent choices, but "She's in Parties" was particularly strong. Murphy's melodica parts may have been a little off, but at the conclusion of the song, he started bashing around on a drum pad and the song transformed into a wonderful dub-styled jam. 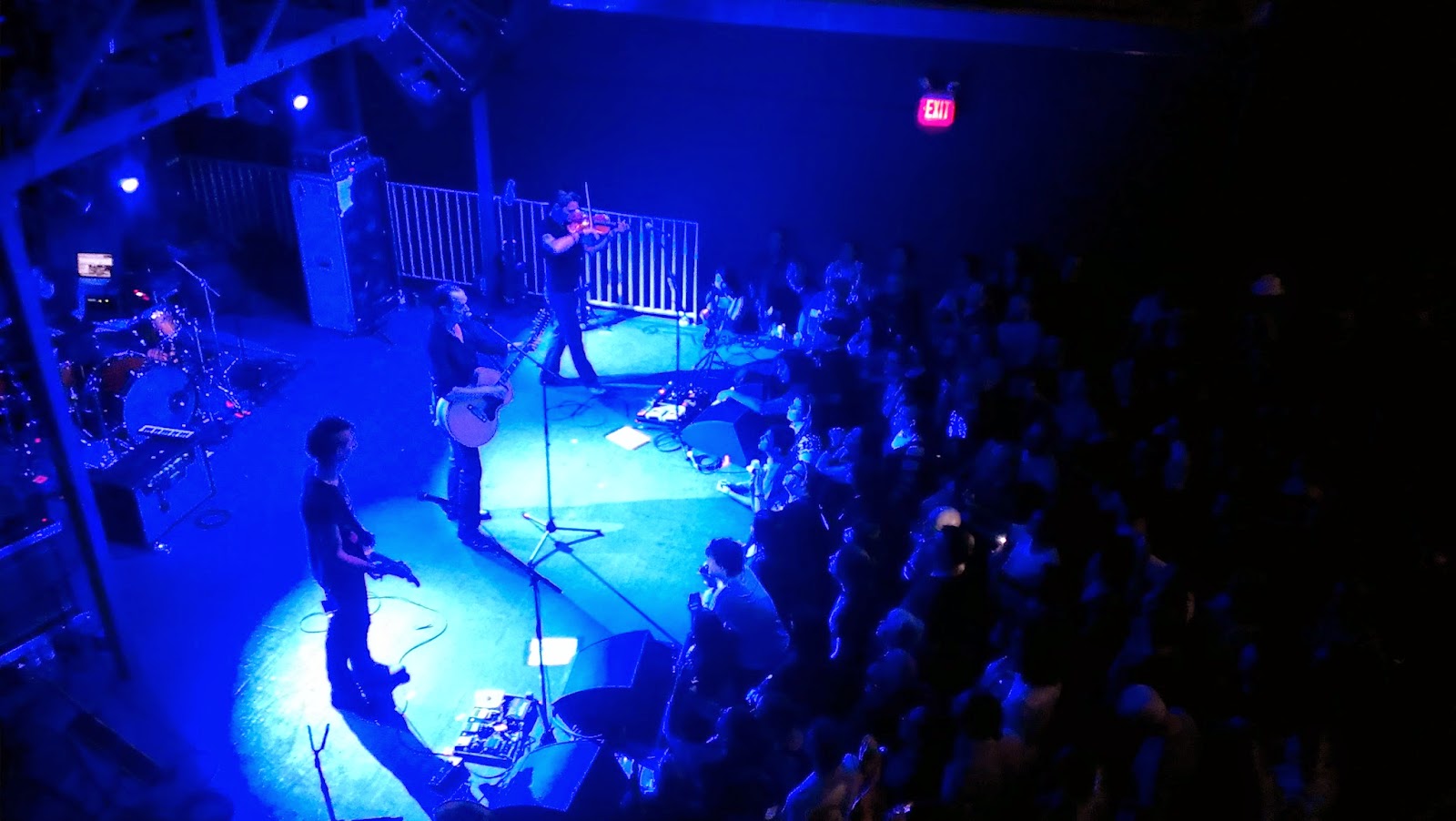 [12-string guitar and violin for "A Strange Kind of Love".]

The most disappointing part was that Murphy exited the stage at the end of "Uneven & Brittle" and called the show. They were scheduled to play another ten or fifteen minutes, and the set did seem short. When I was leaving the venue, I happened to see one of the written setlists that another fan procured. It included the song "Lion" before "Uneven & Brittle", and apparently either "Subway" or "Ziggy [Stardust]" was listed as the closer, but was scratched out. Either would have made for a much better closer than what we got!

I doubt I'll ever know why the band cut the show short, but I felt like I had missed out on part of the deal. At least the performances were good and the band ventured outside of the straightforward alt-rock sound for several songs. I won't complain that Murphy played a very forward-looking set, but then again, his last tour was a 35th anniversary tour of Bauhaus material, so maybe he was ready for a change.

Scores:
The Boxing Lesson: B+
My Jerusalem: C-
Peter Murphy: B-
Posted by Patti at 4:18 AM