A third opportunity to see Belle & Sebastian in Austin in the space of just over two years? How could I resist? And my spouse even came along for the show!

I'd been vaguely interested in seeing Wild Moccasins ever since I'd heard of them during SXSW 2014. I never got a chance to see them, but I was always curious. They're ostensibly an indie rock band, but there are hints of dream pop, post-punk (particularly in the lead guitar), and quite a bit of disco and dance rock. The disco beats popped up early in the set, and the further along they went, the dancier it got. By the end, they were teasing bits of Donna Summer's "I Feel Love". They tried hard to get the audience to move, but the crowd was skeptical, which in turn probably only fed into the band's nervousness. While some of the material seemed by-the-numbers, they never played a bad song, and several of them held some promise. The basslines were solid and there were lots of good elements, but they rarely came together to make a truly exciting song. 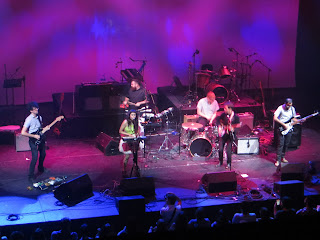 Belle & Sebastian started out with three songs from their newest album, Girls in Peacetime Want to Dance. After a couple throwbacks to their earliest albums in 1996, they played two more new songs before setting out on a journey through their back catalog for the rest of the show. The newest material is explicitly much more dance-oriented than they've ever dared, although they've been toying with the notion ever since going pop with Dear Catastrophe Waitress in 2003. While this made for a bit of a jarring transition between dance pop and folky indie rock, there were a few songs that bridged the gap. "Sukie in the Graveyard" is probably in the middle ground, and "Electronic Renaissance" benefited quite a bit from their current frame of reference. While originally a lo-fi and seemingly out of place electronic piece from their debut album Tigermilk, it now sounded clear, fresh, and energetic when presented by a band a little more comfortable inhabiting the shoes of electronic dance music. Almost all the members played keyboards on the song, and the melodica parts made it seem like even more of an homage to New Order.

While I'm always going to prefer the band's older folkie days, I can mostly get behind their current state of affairs as well. "Nobody's Empire" makes for a decent story, and it seems much more honest and personal than the band usually offers. Similarly, I can appreciate the sarcasm of "The Party Line", even if the sampled triangle and whatever else was a bit unnecessary. Some songs, particularly the newer material, were often accompanied or introduced by videos. These included a couple official music videos, clips filmed with the cover star of the latest album, and in the case of "Nobody's Empire", a generic YouTube-style slideshow of photos vaguely related to the lyrics. This was the only video that specifically annoyed me, in part because it wasn't very good, and in part because it included the problematic picture of a US sailor drunkenly and aggressively kissing a nurse at the close of WWII. 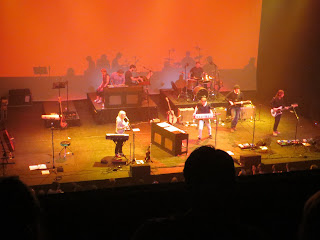 [Sarah Martin singing lead on "The Book of You".]

"The State I Am In", the first song from the band's first album, remains a classic and still one of the band's best. That song was an early high point, and it was followed up with the excellent and witty "Seeing Other People". Sarah Martin then took the lead for "The Book of You", followed by Stevie Jackson for an extended version of "Perfect Couples". While not their best song, they made it a bit stronger live with fuller instrumentation including a noisy guitar intro from Bobby Kildea. Stevie's other lead vocal, "I Took a Long Hard Look", was originally merely the b-side of "Funny Little Frog" in 2006, but it also appeared on the 2013 compilation The Third Eye Centre, which may have contributed a bit of increased attention and led to its apparent public debut at this show. Stevie also teased a bit of Willie Nelson's "Crazy" and explained that he was quite a fan. (The venue is notably located on Willie Nelson Boulevard, better known as 2nd Street, and a large statue of Nelson stands outside the entrance.)

As seems to be the norm these days at Belle & Sebastian concerts, the band started bringing fans on stage for "The Boy with the Arab Strap". People kept streaming up long after the band had selected a few people, and the security could hardly keep most of them from getting up. I also saw some members of Wild Moccasins in the mix as well. This was the largest number of fans I'd seen on one of their stages, and probably the most ridiculous group as well. Some individuals exhibited no shame in taking selfies, filming with their smartphones, singing into available microphones, and trying to embrace Stuart Murdoch. 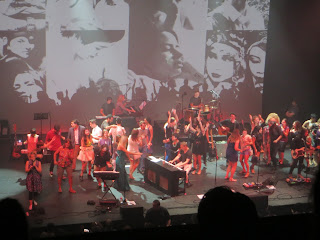 [Crowd invasion during "The Boy with the Arab Strap".]

"Sleep the Clock Around" was another highlight, and it culminated in one of their classic jams, where the band just vamps on the main chords of the song for a couple minutes after the main vocal narrative is long over, as found on many tracks from their early days. It seems so simple, yet the band really brings some energy to these jams and they end up being quite fun.

Coming back for an encore, the band started taking audience suggestions, but they could only play a verse or two from "Dress Up in You" before Stuart forgot the words. I suppose it was nice of them to try. Their final offering, "Get Me Away from Here, I'm Dying", was a strong choice and a great song to finish out the show.

Somehow they managed to only overlap two songs between the setlists of this show and their last headlining show in Austin (at the same venue) two years back. Even their recent show at the Austin City Limits festival last fall only had four songs in common, two of which are songs from the new album. This seems intentional, which is great for fans like me. They have a large catalog of songs, but it would seem that they go out of their way to provide a good mix for the people that keep coming back. I've now seen them play a lot of my favorite songs!

The band again featured Dave McGowan on guitar, bass, and other instruments; Sarah Willson on cello and percussion; and CJ Camerieri on trumpet. However, it notably did not include a string section as it had on previous tours. This absence was not tragic, but it did present the band in a different light. Instead of focusing on the band's orchestral chamber pop attributes, they emphasized their dance proclivities where possible. There was still a contrast with the older, folkier material, but I can appreciate them willing to branch out and try new things. It's hard to complain when they still provide plenty of the songs that the fans want to hear.