I bought a ticket for this show a month before I moved to Berlin because I knew this was something I did not want to miss. The opportunity to see such a quintessential Berlin band in their hometown was irresistible.

The band came to the stage without percussionist Rudolf Moser or guitarist Jochen Arbeit for the performance of "The Garden". Although I like the song, I found the live performance to be a bit dull. I was concerned that the show might be a dud, but the rest of the band came out for an explosive "Haus der Lüge" and convinced me that they still had something in them. Most of the rest of the show was somewhere in between those two extremes, combining conventional beauty and restraint with chaotic energy and noise.

Seeing the band live, it becomes apparent that bassist Alexander Hacke is the underpinning of the band. His bass dominated the mix and was the foundation upon which most songs were built. The self-made percussion was also critical (and a delight to behold in person), but I was surprised by how many songs had backing tracks presumably controlled by touring keyboardist Felix Gebhard. Blixa Bargeld even commented while lighting an "herbal cigarette" for the introduction of "Silence of Sexy" that "man darf nicht alles glauben, was man hört" ("one shouldn't believe everything that one hears"). There's an irony to me that a band so focused on customized instrumentation and experimentation would still use synthesized accompaniment. Despite such assistance, the band was occasionally a bit loose. I don't expect perfection, but the lack of precision was disappointing.

I was also a bit surprised that Arbeit's guitar was pushed back in the mix. The guitar was rarely the centerpiece; it was rather a textural element, often played with an ebow to sound entirely unlike a guitar. It was amusing as well that unlike most rock bands, the guitarist and bassist never swapped out their instruments, but the two percussionists were constantly changing and adjusting their collection of tools. The band's large array of pipes, machinery, metal sheets, bars, springs, gears, and contraptions remains their greatest novelty and contributes substantially to the visual experience (to say nothing of the auditory experience!).

The other special trait of the band was Blixa's trademark bizarre screeching ability. While it is less terrifically frightening and otherworldly than it once was, it has become expertly trained with time. Otherwise, his voice was still strong, although not always perfect in time or pitch. All of the regular bandmates also contributed backing vocals, which was another nice touch.


The setlist relied heavily on Silence Is Sexy (2000) and Alles wieder offen (2007), closely matching the material on their new Greatest Hits collection. That set oddly features only one song from Haus der Lüge (1989) and nothing whatsoever from the eight years and four albums preceding that. (It also only features "The Garden" from Ende Neu (1996) and "How Did I Die?" from their latest album, Lament (2014).) The setlist was similarly biased, although they did a short version of "Halber Mensch" as an introduction to "Von wegen", which itself concluded (as in the studio recording) with a short quotation from "Sehnsucht" off their first studio album, Kollaps (1981).

"Unvollständigkeit" was perhaps the only song they played that didn't entirely work; it felt a bit lethargic and restrained. "Let's Do It a Dada", on the other hand, was a total success, despite the recorded version having limited replayability. But where was the rest of Ende Neu and Perpetuum Mobile? "Was ist ist", "Ein seltener Vogel", or "Selbsportrait mit Kater" would've been great. And while "Salamandrina" was excellent, where was what I take to be their best song, "Die Interimsliebenden"? (However, I know from recordings that the live arrangement sounds like half the song is missing.)

I like just about all the songs they played, but most lacked the intensity that dominated their 80s output. Even the experimental aspects of their 90s albums were missing. I can appreciate that they've grown and developed into yet another phase, but I still wonder where they might go from here. When I reviewed Lament, I had hoped that after seven years of little activity, they might enter a fourth stage of their creative life. However, now they are still playing the same set of 00s material and are barely acknowledging Lament. The setlist had no surprises nor any hints of the "Rampe" improvisations that once were a hallmark of their shows. Nonetheless, Neubauten still manage to fascinate me with almost everything they do, so I still harbor hope that they have more creativity left in them yet. 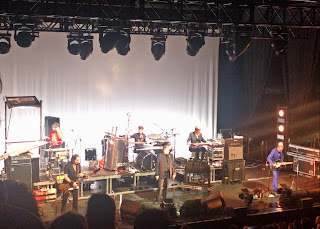 One more note: the band maintained their usual tradition of selling USB sticks after the show containing the complete concert. I found 25€ a bit expensive but still couldn't resist. However, when I got home and gave it a closer look and listen, I discovered that the audio was a mere 256 kbps mp3 file. The spectrogram is loud and appears overdriven and compressed. Clipping can be heard throughout the show, particularly during "The Garden". "How Did I Die?" even has skips in it. If you can ignore those faults, it's a fair record of the show. But without editing or the visual element, it sounds more like a bootleg than a professional job. I'm used to that level of quality, but at that price, I expect better. It's cool to have as a record of the show I saw, but as an independent live album, it's not particularly strong.

Scores:
The concert: B
The recording: C-

P.S. A recent concert at the new Elbphilharmonie in Hamburg can be seen on YouTube here. It's a slightly stronger set than what I saw and you can see all of the percussive creations in their full glory. The audio gets oddly terrible in the last song ("Redukt"), but otherwise it's quite well done.
Posted by Patti at 11:11 PM