Of the four "core" or (loosely speaking) "original" members of the legendary Can, only one is still alive: Irmin Schmidt. Best known as the dramatic keyboardist, he now is mostly busy with film soundtracks. In recognition of his talents and legacy, this concert paired Schmidt the composer with Schmidt the influential sound synthesist. It seemed like an odd concept, but well worth the chance.

The night began with Irmin Schmidt conducting the Deutsche Filmorchester Babelsberg, based in nearby Potsdam. They performed about 45 minutes worth of symphonic music apparently gathered from Schmidt's various soundtrack works and arranged by Gregor Schwellenbach. Without the intended film accompaniment, the music was disembodied and abstract. I (unsurprisingly) didn't recognize any of the compositional elements. The instrumentation was rarely particularly technically challenging and instead focused more on mood and atmosphere. Many sections relied on tension and heavy suspense. Unusual percussion abruptly interrupted the quiet moments. The one extended section of serenity and melody was followed by an equally long section of dissonance and uncomfortable tone clusters. The effect was a bit disconcerting as the jumbled themes jumped from scene to scene.

This was followed by "Can Dialog", a "composition for a large orchestra" in three parts by Schmidt and Schwellenbach. In total, the work lasted about 30 minutes. Each of the three parts seemed to primarily revolve around one of Can's most famous songs. In each case, it wasn't initially obvious what was what, and there seemed to be elements of other songs mixed in as well. The composers freely reinterpreted the original works and let them grow into new directions with logical extensions. The performance was more aggressive, upbeat, and physically challenging than the film soundtrack sections. The orchestra was not always as tight as they could've been, but they brought a delightful energy that I'd rarely seen before in a symphonic setting. Similarly, there was far more fast-paced repetition and propulsive percussion than I was used to. The unpredictability made it quite enjoyable despite any faults.

After a break to reconfigure the stage, the second half of the night commenced with a Can Tribute led by Automat, a Berlin-based band featuring Jochen Arbeit (of Einstürzende Neubauten) on guitar, Achim Färber on drums, and Georg Zeitblom on bass. They were augmented by Max Loderbauer on keyboards and synthesizer and Andrew Zammit on percussion and more keyboards. Vocals were handled by trading off between four Berlin-based performers: Peaches, Bettina Köster, Tikiman, and Gemma Ray.

Peaches started off with an aggressive take on "Vitamin C". It was a good way to get things going, but the music didn't quite gel. This was followed by an abbreviated but formless version of "Bel Air" led by Bettina Köster, perhaps best known for fronting Malaria!. Unfortunately, the band wasn't able to capture the beauty of the original, and Köster's raw energy only seemed to throw it off. Tikiman's rendition of the latter-day "Don't Say No" managed to get a bit funkier, but his mic was initially inaudible and he seemed to have trouble getting into it. 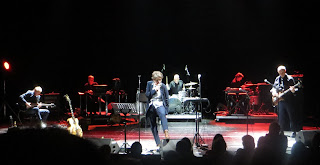 [Can Tribute with Bettina Köster.]

Much to my surprise, it was Gemma Ray's versions of "Deadlock" and "I Want More" that finally convinced me that the show was going somewhere. I barely knew her beforehand, and considering her background in retro-noir blues, I wasn't exactly expecting her to fit into the right vibe. However, her voice was the most powerful and effective of the four, and her guitar added just the right touch of additional melody to the blend. Arbeit spent most of the night playing in the same effects-heavy style as he does with Neubauten, again often with an ebow, which meant that he was building more of a soundbed than taking the lead. Ray finally took that role. Her parts were generally fairly simple, but they were exactly what was needed. She also wasn't afraid to experiment: she kept a large knife wedged behind her instrument's neck that she occasionally wielded against the strings.

After that, Ray stuck around on guitar for the rest of the night. Köster came back out to sing "She Brings the Rain", and this time, her vocal performance suitably matched the band's restraint and it came off beautifully. Similarly, when Tikiman came out for a truncated "Mother Sky", he seemed in his element and the band worked up a powerful groove. Peaches came back for "Halleluhwah", which initially seemed like an odd choice after the orchestra had already done a version of it. The tribute band's version was another shortened take, but it's hard to complain about anything when given a convincing performance of that irresistible rhythm. Färber and Zeitblom held it down with fluid skill and Peaches had fun invoking the spirit of Suzuki.

For the final number, all four vocalists came out to do "...and More", the simplistic b-side version of "I Want More". It still jammed and they clearly had fun with it, but it made me wonder why that was the song they chose to close on. Of all the idiosyncratic, unique, and influential songs from Can, they chose the one that was a deliberately derivative alternate version of a song they'd already done. And that was it! The tribute didn't even last a full hour.

The concept of the evening was a bit ill-defined, but it was cool to see so many famous figures united in their Can fandom, and the juxtaposition of modern orchestra against a backwards-looking rock tribute was amusing. While Schmidt's film music was only mildly pleasant, his reimagining of Can's classics was perhaps the highlight of the night. The tribute took some time to get its footing, but they largely lived up to the premise. They were never going to best the originals, but they got to play around and experiment with the themes, and if they were halfway successful, then they reached their goal. My only real disappointment was that Schmidt didn't stick around to play the keyboards in the tribute band!

Scores:
Irmin Schmidt & Deutsches Filmorchester Babelsberg: B
Can Tribute: B-
Posted by Patti at 11:21 PM