I had no idea that OMD was still popular enough that they could sell out a night in Berlin at a large venue and then offer a second night that was also quite packed. The crowd was markedly different (and skewed older) than I’m used to, but I had the same experience with The Human League last year.

Opening act Tiny Magnetic Pets claimed to be the only electronic band in Ireland, which I don’t believe in the slightest. Their music was mostly bright, upbeat, and danceable, but rather static. They managed to get a decent atmosphere going in a few songs, but they didn’t quite take off from there. I liked that they had experimented with their electronic setup, but their choices didn’t exactly work out in their favor. Their stage presence was sapped of much of its potential energy by using monotonous drum pads and pre-programming most of their instrumental parts. As a result, the keyboardist was left to merely play chords underneath the more interesting bits. Their singer had a strong voice, but the only nuance came from some occasional interplay with the much quieter keyboardist’s backing vocals.

I was worried that Orchestral Manoeuvres in the Dark might suffer a similar fate. Plenty of OMD’s songs are cheesy and lightweight, and their post-reunion albums have as many weak points as good parts. Thankfully, they’ve maintained plenty of artistic integrity and they made a strategic decision to build a set that balanced their deliberate pop singles with their earlier, more experimental songs. They went as far as opening the show with “Stanlow”, a long and brooding song about a power plant from their understated but superb second album, Organisation (1980).

I appreciate that the band still embrace their early songs in all their idiosyncratic glory. They chose to play both of their songs about “Joan of Arc” – one right after the other. They closed their main set with “Enola Gay”, infamously written about dropping the atomic bomb. The show ended with their first single, “Electricity”, a great song that really is earnestly about electricity (and the environment). Their breezy mid-period single “So in Love” is in fact bitterly the opposite of what one might expect (“It’s hard to believe / I was so in love with you”). Even their new songs maintain their wit, most notably with the consumerist critique of “The Punishment of Luxury”. A taped interlude before “Statues” featured a medley of spoken bits from Dazzle Ships (1983) and other albums, including the hilarious line, “The future you anticipated has been canceled”.

While I was disappointed at the lack of anything else from the exceptional Dazzle Ships, they did play several of my favorites, including all three singles from Architecture and Morality (1981). For “Statues” and “Almost”, the band came forward to the front of the stage to play in the traditional synthpop row setup à la Kraftwerk. Keyboardist Paul Humphreys was given his moments to shine with two songs featuring his lead vocals (“(Forever) Live and Die” and “Souvenir”), and vocalist Andy McCluskey played bass on about half the tracks, particularly the older songs. Even when he had the bass, he had a hyperactive energy and ran, jumped, and danced all around the stage. Keyboardist Martin Cooper also picked up a saxophone for a couple solos, and Stuart Kershaw wisely chose to play live drums.

All of this movement and variation did a lot to keep the show interesting. They managed to play a number of dancey newer songs that were reasonably good while still playing a huge number of hits. Their blend of styles and sounds was an excellent choice, and I presume that both sides of their divided audience were pleased.

The quality of the performance was also quite good. McCluskey’s voice is about as good as ever, and while Humphreys’ was never quite at the same level, it was and still is almost as good. When the two sang harmony together, it was excellent. Those moments were some of the best of the night, even when they were part of their more generic pop songs. The only unfortunate bit was that McCluskey’s bass was mixed far too low, although my mediocre seat might not have helped with that. Otherwise, the instrumentation was great, and I barely noticed the occasional sampled part. OMD have been at this for a while, and it seems like they’ve got it pretty well figured out. 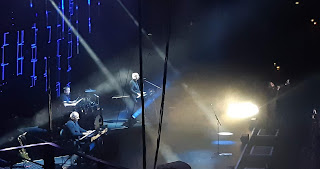 [Orchestral Manoeuvres in the Dark.]