Just about two years ago in the same venue, I saw the Tour of Tours for the first time. Since then, the individual band members have continued their separate projects as usual, but they also recently released their first proper album, A Road Record. It’s mostly a live album from the 2017 tour, but it also includes elements from rehearsals and the backstage. It shows off the breadth of the project and includes something from everyone in involved, including Honig, Jonas David, Tim Neuhaus, Ian Fisher, Town of Saints, Florian Holoubek, Martin Hannaford, Ryan Thomas Carpenter, and Davide Iacono (of VeiveCura). The spoken bits can be a bit distracting for repeated regular listening, but the album as a whole is an immersive, complete experience that captures many of their collective strengths. The production is great and substantially more cohesive than their prior Song of Songs, which felt more like a simple compilation assembled around the title track.

This concert picked up the same threads. The collective naturally performed many of the same songs from the album and from the last concert, but over the course of over two and a half hours, they also threw in some new songs and others that I hadn’t heard before. Every one of the ten members took the lead at some point, including even the quiet percussionists Florian and Davide and guitarist Martin. They also invited their merch seller and the producer of their new album to the stage to play along for a song each. Best of all, they continually traded instruments and even vocal parts. They were already doing that in the past, but this time around, they took it to another level. On several songs, almost every verse would be sung by someone other than the original songwriter/vocalist, which gave the songs a new dimension to grow in. Furthermore, the constant rotation of instruments meant that there were always plenty of little surprises. Most members took a turn on the bass, at one of the keyboards, and on the drums and percussion instruments. Tim Neuhaus sat in on the drums for an extended enthusiastic spell, Jonas brought a brass horn and a vocal effects board, Heta Salkolahti’s violin had a prominent role, and Ian fleshed out the sound with banjo and 12-string acoustic guitar.

For most of the show, all ten members of the collective shared the stage, but for a few songs in the middle, they brought the energy down a bit and let some smaller subsets of the group play with more reduced arrangements. Most dramatically, Heta and Harmen Ridderbos of Town of Saints played a Finnish folk song without accompaniment. It worked beautifully and helped to broaden the mood. With the full band back on stage, another highlight was a bizarre, theatrical interlude led by Ryan Thomas Carpenter in which he spoke-sang an extended take on Sun Ra Arkestra’s “Nuclear War”. For the encore, the band came back for one last round of rousing numbers from each of the main contributing projects. At the end, they again jumped down from the stage and went to the center of the crowd to play a rousing version of “Up in Smoke” and their one collaborative number, “Song of Songs”. 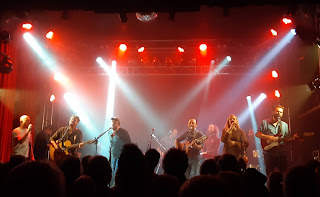 I was again impressed by the collective’s ability to switch things up and keep such a long show interesting. Their various separate projects share plenty of common ground, and there is some risk of building a solid, unified sound, but they fought the urge to blend too much and managed to keep their own unique elements. Their willingness to switch up the songs, arrangements, and individual parts goes a long way to keeping the show fun and engaging.