This has been a hard year for most people. I’m not going to pretend that I’ve had it as hard as most. That said, it’s probably obvious that I’ve missed seeing live music. It’s one of the only forms of social entertainment that I especially enjoy and engage with. It’s one of the few things that actually makes me feel connected to the world around me. I much prefer writing about live music to recorded music, so I’ve been pretty quiet here. The stress and the anxiety of the world, and particularly in the USA, haven’t helped. I’ve barely wanted to leave the house for six months now. But I have the luxury of living in Germany, and things are relatively safe here. So I finally decided it was okay to see a free, open-air concert in a low-key environment. There won’t be many weekends left with good weather, so I don’t know how many opportunities I’ll have like this before winter comes.

Anyway, the Haus der Statistik played host to an event with workshops, presentations, and live music. The building is the former statistics office of the DDR that has largely fallen into disuse. It sits just off Alexanderplatz in the center of the city. It seems to be indefinitely under construction but in the meantime is home to an artist collective, who have dubbed the area “Allesandersplatz” (“Everything-Different-Place”). The main draw for me was Bernadette La Hengst (formerly of Die Braut haut ins Auge), who performed a set accompanied by the Chor der Statistik, a large, casual choir. These sorts of choirs are in vogue in Berlin, and they seem like a lot of fun. Bernadette made it clear that the choir was open to everyone interested, and she invited the audience to spontaneously join in as well.

Bernadette and the choir played songs from throughout her career, including a song or two from Die Braut haut ins Auge, and consistent themes were solidarity, social and economic justice, and unity across borders. For most songs, the only instrumentation was her guitar, and the songs were arranged to accentuate harmonies and multiple vocal parts. The choir didn’t strike me as a professional unit, but rather a casual collective of people that shared a political outlook and a desire to have fun in a productive outlet. That said, I didn’t hear any jarring disharmony or missed notes, and in fact I was impressed with the arrangements, the performance, and the sustained jovial atmosphere.

The final two songs were particularly notable. The penultimate was a cover of Palais Schaumburg’s classic “Wir bauen eine neue Stadt”. Bernadette played along with a drum machine, which gave her enough space to add some lead guitar flourishes. With the choir singing various overlaid parts, it made for a more relaxed, less skittish rendition. For a song ostensibly about post-war reconstruction with metaphorical overtones of anti-capitalist, independent artistic creation, the scenery was perfect: the stage was surrounded by piles of stone and concrete in the parking lot of a semi-abandoned building from a government that doesn’t really exist anymore.

The final song was a version of Beethoven’s “Ode an die Freude” (“Ode to Joy”), with lyrics adapted from the original by Friedrich Schiller. Taking inspiration from the fact that the music (but not the words) are used as the European anthem, Bernadette (along with fellow choir enthusiast Barbara Morgenstern) composed new multilingual lyrics explicitly embracing diversity and open borders.

This was a thoroughly pleasant experience, and presumably reasonably safe, since there was plenty of room to spread out. If this is how we have to do live music for the time being, I’m on board. 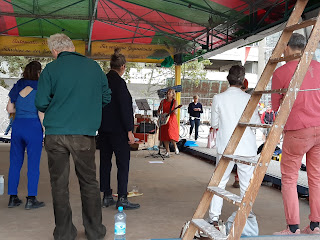 P.S. Thanks to Lutz!