I don't remember how I learned about Young Marble Giants. Maybe it was when I heard Belle & Sebastian's semi-obscure cover of "Final Day". Who knows. But recently, I heard that their entire recorded output (one album, one single, one EP, one Peel session, one compilation track, and one set of demos, although a couple demo tracks and a live recording are absent) was being released as a three-disc set at a decent price. Not having heard a single song, I went for it. It might be really minimalist and limited in appeal, but I think it's great.

Also, my apologies for the lack of reviews as of late. I think I might like this format a bit better, but I might still use the old here and there. 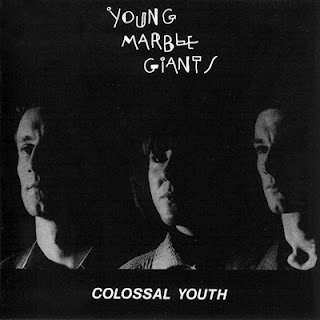 If there's one thing you notice about the Young Marble Giants, it's how incredibly minimalist their music is. One guy (Philip Moxham) plays bass (and what a great bass he plays – he plays in the higher register and carries much of the melody, similar to Joy Division's Peter Hook; I wish I could write basslines that well). One girl (Alison Statton) sings. The other guy (Stuart Moxham) alternates between a very trebly, usually muted guitar and an organ, both of which he is quite proficient with. The only other sounds are simple drum machine rhythms, occasional extra noise provided by a friend, and the rare overdub.

Somehow, it all works. The stark clarity of each instrument stands out, and you can easily distinguish the few but perfectly interwoven parts. The music is quite well-composed. The guitar tends to play short chords while the bass winds around the chord changes. The few times the bass repeats a root note like a modern rock song's bassline, it feels nearly out of place, but even then, the tone is always trebly, prominent, and higher than a typical bass. In the songs with organ, the organ is usually played with both hands – meaning that there is a bass part on the organ, too. Usually, that part holds the root notes while the bass guitar goes on its merry way, filling out the chords with little flourishes. The singing, though, is plain, and admittedly done by an untrained singer.

Lyrically, many songs seem to deal with love lost or just general relationship woes, but it's all a bit removed and obscure. Rarely do the words come out a say the story directly, except perhaps the stand-out track "N.I.T.A." (also represented by a demo and Peel session version), where Stuart writes and Alison sings, "It's nice to hear you're having a good time / But it still hurts 'cos you used to be mine / This doesn't mean I possessed you / You're haunting me because I let you". The rest of the lyrics of that song are in sharp contrast rather abstract. "Eating Noddemix", referencing what is apparently a Swedish cereal bar, alternates discussing morning routines with various catastrophes.

Other songs are outright obscure with no hope of understanding, most notably "Choci Loni", a six-line piece about someone who eats through his house or something. "Salad Days" is a three line piece: "Think of salad days / They were folly and fun / They were good, they were young". Simple, but it tells it all (and lends its name to the demo compilation). YMG's one single, "Final Day", is an apocalyptic piece: "And the world lights up for the final day / We will all be poor having had our say". 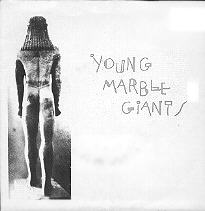 The band is usually uptempo, keeping pace with a steady but moving drum machine at all times. Some pieces have simply fantastic instrumental work – not by virtue of virtuosity, but just in how the instruments interact. I love "N.I.T.A." and the instrumental "Wind in the Ragging" (featuring a great bit of counterpoint between organ and bass). No song exceeds much more than three a half minutes (only a couple come close, but two demos do reach four and a half). Their ideas are comparatively short but still wonderful.

The Testcard EP, released around a year after the album, features six instrumentals. "The Clock" features what sounds like an acoustic guitar that actually strums fuller chords and picks a few notes out, but the dancey "Clicktalk" is my favorite of those six, with a great hummed sort of baritone line. The demos aren't all that amazing; they're mostly just lower-fi versions of tracks from the rest of the output, but a few are subtly different, and four tracks are unique to the demos. The Peel session is likewise not particularly revelatory but mildly interesting to hear the band semi-live. 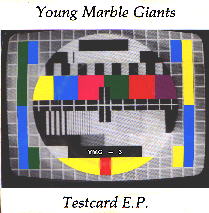 I think this album stands as a great example of post-punk radicalism. Instead of loud guitars or a wall of sound, the band chooses precise, clean, and clear tones to distinguish each part and let the gaps speak for themselves. It's a bit arty, slightly pretentious, and very unmarketable... or so I would think.

Folkor,
Thanks for the continued immersion into the inner recesses of your obscure and sophisticated musical mind. More of this. Less Kearney.

Whom I presume to be ol' Josh -
Your welcome, and thanks in return. There will be less Kearney, trust me. I'm glad to be of some service to the general interest of your noble mind, though.

Nice review! Did you know that Peter Buck was a huge fan of Young Marble Giants. I read that he listened to Colossal Youth every day for a couple of years. When you hear those early REM ablums, that skinny, scratchy melodic guitar riffing, it starts to make sense.
Score one, Wales!

Thanks for reading! I could totally see Buck diggin YMG. A lot of alternative bands dug/dig them, apparently.