This past week Control made its premiere in St. Louis, showing on one screen at one theater. I went and saw it with a couple friends and my brother, and although I have no desire to usurp my brother's venture of reviewing films, I would like to review this movie on the grounds that it is quite clearly about music. Specifically, Control is about Joy Division, one of the most hailed post-punk bands of the late 70s, and their lead singer, Ian Curtis, who committed suicide right as the band was getting serious recognition. 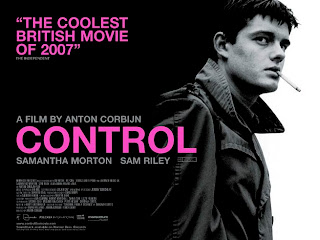 The film is sort of based off of Touching from a Distance, a memoir about Ian by his wife Deborah Curtis, but is supplanted by plenty of other sources. (If you are concerned about the accuracy of the depicted events, the surviving members of Joy Division have approved the content of the film.) Unlike some biographies of Ian and the band, Control tries to combine the personal aspects of Ian's life with the story of the band, and since the two do go hand in hand, it works out well. It was directed by Anton Corbijn, who might not be a big name, but he has been a longtime photographer (taking pictures of Joy Division when they existed 27+ years ago) and music video director (known for doing Depeche Mode's "Personal Jesus" and Joy Division's posthumous "Atmosphere" videos), and this is his first film, a fairly appropriate choice considering his history.

I don't want to detail all of Joy Division's history, so if you don't know it but want to, see the movie or read it on Allmusic or something. The movie chronicles Ian's first encounters with Deborah (followed by their very young marriage and childbirth) and the rest of the band (at an infamous Sex Pistols concert), then shows the growth of the band (becoming managed by Rob Gretton, playing on TV by Tony Wilson, recording the first album and singles with Martin Hannett, etc.), and then shows the troubling aspects of Ian's life and their toll on the band (namely marriage problems and epilepsy).

Fans of the band or scene might remember 24 Hour Party People, which focuses mostly on Tony Wilson, the co-owner/manager of Factory Records, but depicts some of the same events. Whereas that movie makes no attempt to separate fact from fiction (explicitly stating that the myths make better stories anyway), Control is more focused and aims to set the record straight. (My one question is the validity of the scene in which Joy Division signs to Factory: supposedly Wilson wrote the contract in his own blood, but I've heard conflicting reports to the truth of that. Beyond that one scene, every other event depicted appeared legitimate to me.)

Control isn't just an accurate biography; it's also a well-made film. The acting is solid, the visuals are good, and the soundtrack is great. The film alternates between black-and-white and sepia tones, which usually swap unnoticed. After Ian's first seizure, the film jarring switches from a dark outdoor sepia scene to a bright, indoor black-and-white scene that will nearly blind you, and although it's a bit annoying, it sure does serve as a wake-up call that something's not right. Ian was never fond of his hometown of Macclesfield, and the monochrome suits the bleakness of the area (and matches most of the historical photography of the band).

The real winning touch, though, is the soundtrack. It combines music from the era that influenced the band (Velvet Underground, David Bowie, Kraftwerk), original recordings by the band, new soundtrack recordings by the surviving members of Joy Division, and live material recorded by the cast for the concert scenes. The thing is, you wouldn't know that the concerts aren't actual Joy Division recordings – the cast does a really good job of accurately covering the material, affecting the band's demeanor, and actually sounding like the real thing. One of my favorite scenes merely traces Ian's walk to his boring job at the employment agency, but it's set to the early Joy Division song "No Love Lost". The song has a great bassline and a solid drumbeat that starts right as Ian starts walking and follows his pace. When we see the backside of Curtis, his jacket has the word "hate" scrawled on it.

The movie gets fairly intense in the latter half as the line between Ian's onstage dancing and seizures becomes more and more blurry and his affections shift from his wife to a Belgian journalist. The band keeps writing, recording, and performing, but Curtis' condition becomes worse and worse until he simply cannot take it anymore. The juxtaposition of the Joy Division songs that the band is shown recording or performing with the events going on make evident a connection that I never thought much about before. The band is shown working with songs in mostly the chronological order they were originally written, and the lyrics of each song seem to correspond eerily close to real life. The (real) band and other involved people have said before that the warning signs of Curtis' suicide were all there in his lyrics, but even I never credited his lyrics as actually applying the real life very well. After seeing an epileptic girl at the employment agency, Curtis sings "She's Lost Control", which lends the film's title and serves as a foreshadowing of Curtis' own problems. Later, after a troubling scene with Deborah, the band is shown recording the music video for "Love Will Tear Us Apart", a song whose lyrics strike a deep chord in response to the Curtis' relationship. Other songs throughout the movie similarly reflect real events (albeit perhaps less obviously).

Everything about this movie comes together well: the music goes with the visuals quite well. One could complain that the last third seems to move at a slower pace, but the movie does manage to pack a lot into just two hours without leaving much out. Many scenes make reference to events that a non-fan might not catch, which could make much of the movie alienating, but for those that know the story, it all comes together in a sort of "wait a minute, that crazy producer dude is Martin Hannett!" sort of way. Not to spoil the ending (although it is history anyway), but after Curtis' death the rest of the band sits at a table looking sombre, and drummer Stephen Morris has brought his girlfriend, Gillian Gilbert, along. Although she isn't named and no words are spoken, this clearly alludes to the dawn of New Order (which consists of the three remaining members of Joy Division plus Gilbert). Actually, the whole set of scenes in the last few minutes made a big emotional impact on me: there's the drama of everything falling apart, and it's all set to the Joy Division single "Atmosphere", which is already a haunting, moving piece.

I thoroughly enjoyed this movie. If it plays in your city and you know anything about the band, go see it. 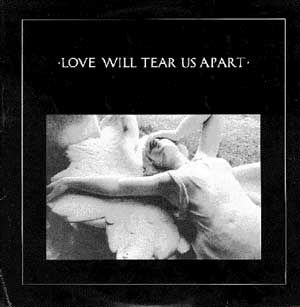