The Modern Lovers have a bigger name than an actual recorded history. I knew about them because countless other great bands had covered them: Siouxsie & the Banshees, John Cale, Echo & the Bunnymen, etc., and the band shared a keyboardist with Talking Heads (Jerry Harrison). However, the Modern Lovers never recorded an album during their short early 70s lifetime and broke up with nothing but some demos to show for it. As singer/songwriter/guitarist Jonathan Richman began rounding up a second set of Modern Lovers in 1976 (but this time explicitly labeled as his backing band), Beserkley Records compiled some of the demos the original band recorded (mostly produced by John Cale) and released the album years after the recording process. The album has been reissued a few times and now boasts a host of bonus tracks from the various demo sessions. 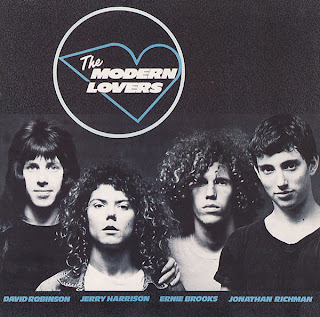 In some ways, I think the Modern Lovers wished they were the Velvet Underground. Richman is known to have hung around the band band in the day, and the band frequently covered "Foggy Notion" and perhaps a few other Velvets songs live. The band line-up is total rock-'n'-roll: guitar, bass, drums, keyboard, nerdy singer. The band is called proto-punk, and for a reason. The musical structure is ridiculously simple (anyone can play it); almost every song is a two- or three-chord rocker. "Pablo Picasso" is one riff based around one chord, and the slower songs don't get very complex either. In addition to the accessible and fairly traditional structures, the sound is usually a bit loud and distorted, and the various instruments use a fair amount of improvisation within the chord changes. The lyrics show a stand against what seemed like the dominant cultural hegemony of stadium rock and hippyism.

The music here has such a great sound to it, but what really makes the Modern Lovers a winning band is their lyrics. Richman sounds like a young, naïve, nervous and weird man who just wants friendship and love. Many of his songs are about romance, but his approach is very un-rock-'n'-roll; it seems that his obtuse nerdiness is his main impediment to love, and instead of the same old "let me hold your hand" sort of business (sorry, Beatles), he sings things like, "I don't want just a girl to fool around with / I don't want just a girl to ball / What I want is a girl that I care about" in "Someone I Care About". It's so plain and straightforward, so simplistic and innocent. However, it is very self-aware, and it's not like Richman doesn't know about the rest of the world. He just wants his good old way.

In "I'm Straight", Richman shows his awkwardness and dislike of drug and hippie culture: "I saw you thought today walk by with hippie Johnny / I had to call up and say how I want to take his place / ... / See he's stoned, he's never straight". In "She Cracked", Richman again expresses his style of conservatism: "She'd self destroy, necessary to self enjoy / I self develop, necessary to self help", "She'd eat garbage, eat shit, get stoned / I stay alone, eat health food at home". That one cracks me up a lot. He gets things pretty clear in "Old World" when he sings, "Well the old world might be dead / Our parents can't understand / But I still love my parents / And I still love the old world". He's aware that times have changed, though, and he's willing to accept that; he finishes the song with, "Alright, now we say bye-bye old world / Gotta help the new world". He even acknowledges that the old world isn't perfect: "I see a '50s apartment house / It's bleak in the 1970s sun".

On the whole, the lyrics are genius. I love the mild awkwardness, the desperate search for affection, the glorification and appreciation of a mix of traditional and modern values, and the somewhat subtle humor. "Astral Plane" is about a sort of imaginative dream-world where Richman can picture himself with his love, and "Roadrunner" is an absolute declaration of love of the highway and AM radio. Richman loves his old world and health food but simultaneously declares, "And me in love with modern moonlight / Me in love with modern rock-'n'-roll / Modern girls and modern rock-'n'-roll / Don't feel so alone, got the radio on". "Modern World" similarly expresses his unsubtle modern love: "I'm in love with the USA now / I'm in love with the modern world now". I greatly appreciate Richman's sort of postmodern attempt to appreciate both the past and present and try to get the best out of both world. Like me, Richman prefers things like music, love, health food, and the imagination instead of drugs and unnecessarily destructive behavior.

I have been focusing on the words a lot, but I do greatly appreciate the music, too. (However, I suspect Richman must have shared my priorities here, since in concert he would apparently stop the music and recite the words if he thought the audience wasn't paying enough attention). "Roadrunner" is glorious two-chord rock-'n'-roll (although admittedly a third chord crops up a few times). That song starts the album to a great start and sets the scene. The drums thump along in a simple, steady, upbeat rhythm, the guitar chugs along, Lou Reed style (a la "What Goes On" or something), the bass follows with a few flourishes, and the keyboard flows around the scale. It's great. Throughout the songs, the keyboard and guitar both get a few solos here and there, but nothing too dramatic or superfluous. Rhythm and tempo remain mostly consistent except for "She Cracked", an already great song (with its quick chugging, distorted guitar, dark keyboard, and simple but great melody) which slowly begins getting dissonant and messy before suddenly running right back into the chorus without missing a beat.

"Pablo Picasso", a witty song about the artist (sort of: "Well some people try to pick up girls / And get called assholes / This never happened to Pablo Picasso / ... / Pablo Picasso never got called an asshole / Not like you") that sort of points out the power of fame over ordinary life, has what is probably the most blatant guitar solo, but even here the solo is fraught with what could be considered mistakes (sort of like Neil Young's "Like a Hurricane" solo with all the thuds of trying and failing to hit artificial harmonics). The best is when part of the solo is just Richman turning his distortion pedal on and off.

"Hospital" is a slow, longer song that sort of cracks me up: "When you get out of the hospital / Let me back into your life / ... / And when you get out of the dating bar / I'll be here to get back into your life", "I go to bakeries all day long / There's a lack of sweetness in my life". He sounds so down and self-deprecating when awkwardly mumbles, "And when I walk down your street / Probably be tears in my eyes". I guess I can't stop talking about the lyrics, so here's one more: "Girlfriend" opens with a reference to being in the Museum of Fine Arts of Boston (a city which he mentions in several songs) but declares he'd pretty much rather have a girlfriend, which he then proceeds to spell out, only he spells it quite clearly wrong: "g-i-r-l-f-r-e-n". Who knows. The song has a great walking bassline under the somewhat slow and sparse feel of it all. At one point the drums even break the beat and hold the snare crack back a beat.

It's a sad fact that the Modern Lovers were so short-lived. Some of Richman's later work with different sets of Modern Lovers might be interesting, but after this outfit, he mostly traded his distortion and electric guitar for an acoustic guitar. The core set of songs here is incredibly well-written, and for demos, the recordings are of good quality and the performances are great. It's not quite right to say Richman was ahead of his time, but he certainly didn't fit in with his own. He wouldn't quite have fit in with the late 70s punks, but it probably would have been less awkward than the early 70s types. At least they had the sympathetic John Cale on their side.

This is a great album. The last five bonus tracks are of lower quality (in terms of both performance and recording) and not as essential. Find the album on cheap vinyl, or find an older CD reissue with just the first few bonus tracks, or go all out, but this is a great album, and it clearly meant a lot to plenty of other musicians. 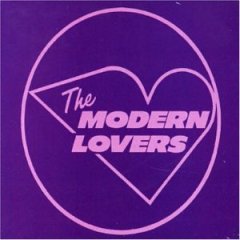 I heard you have a compilation of every good song ever done by anybody. All the underground hits. All the Modern Lovers tracks.

"I've never been wrong. I used to work in a record store."

Man! I totally forgot about the Modern Lovers reference in "Losing My Edge"! That's great. They are hip enough to be mentioned by LCD Soundsystem.

Also, I didn't know about the Bowie version of "Pablo Picasso". Apparently it's on "Reality", another latter-day album I don't have... how's it sound?

I'm not sure if you are asking about the album or the song.

The album isn't nearly as great as its predecessor, Heathen, and although it has worthwhile high points, they are fewer and farther between.

As for the cover itself, the production value and direction are pretty far removed from the original Modern Lovers cut. Pretty spacey, but very fitting for Bowie's Reality era.

I think I meant the specific song, but since I'm not familiar with post Let's Dance or so Bowie, a complete response about the album is easily warranted. It's hard to imagine "Pablo Picasso" as a spacey song... the Modern Lovers and John Cale versions are just so rocking and all.

just discovered this album and I was wondering if this is as good as it sounds..thank you for confirming that it is :)

noleggio proiettori Milano said...
This comment has been removed by a blog administrator.
April 20, 2011 at 10:36 AM