I'm back in Germany, this time on an internship. I'm speaking a lot of German, but I'll keep my reviews in English (unless someone requests otherwise). Anyway... 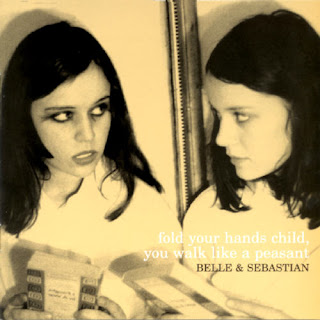 Fold Your Hands Child, You Walk Like a Peasant is arguably the most interesting album Belle & Sebastian have done. The band's career can more or less be divided in half. Their early years were more folky, light, and kind of twee, while the latest two albums have a much different production and feel: more directly poppy and electric. Most people probably know and/or like their second and third albums best, those being If You're Feeling Sinister (1996) and The Boy with the Arab Strap (1998). Fold Your Hands is their fourth, and the last of the older style. The album finds the band trying to diversify in several directions but retaining the same general feel and moods as previous album. Something about the album makes you understand why the next one went in a totally different direction. (I'm not counting the Storytelling soundtrack here, because I've never heard it and I don't know what it sounds like. If you know a bit about it, by all means share.) [Edit 2018.08.30: I found a copy years ago now. It shares elements of uncertainty, tiredness, and readiness to try something new.]

None of this is to say that Fold Your Hands is bad. It's just stretching out, reaching for something different. It's the band's fourth album (with four EPs in between, too), and there was no way they could make another classic like If You're Feeling Sinister. However the band made their decisions, they decided to try switch things up a bit here. Normally, Stuart Murdoch writes and sings just about every song by the band, but this time things are different. Cellist Isobel Campbell sings lead on "Family Tree" and shares the mic on "Beyond the Sunrise" with guitarist Stevie Jackson, who also sings lead on "The Wrong Girl". Violinist Sarah Martin makes her only lead vocal contribution on a B&S record on "Waiting for the Moon to Rise". Jackson and Campbell also sing the occasional line or verse in a few other songs.

It's not just vocals that are different. "I Fought in a War" is a sad bit about the dull and dangerous life of a soldier, while "The Chalet Lines" is probably the most emotional song Murdoch has written. Switching sexes, he sings as a girl who has been raped, and he pulls it off through a subdued accompaniment and his own brutally honest confession. Until I read the lyrics, I'd never thought much of it, but the words really hit home. "Don't Leave the Light On Baby" has something of a soul feeling to it thanks to a great keyboard line. And then "Before the Sunrise" is an overtly slow, downcast duet with a sort of traditional peasant song feel to the lyrics.

I rather like Sarah Martin's song, "Waiting for the Moon to Rise". The lyrics aren't really new for the band, even though they are written by a different vocalist, but I kind of like the imagery anyway: "There's a train I want to catch / But it won't leave here for a while / Till darkness fills the eastern sky / And streetlights stretch for miles / Through the spring / And the winter and the morning." I really like the vocals, too, which are very soft but less breathy than Campbell's, which is odd since Martin is incredibly soft-spoken in public.

"Family Tree" is a solid contribution from Campbell where she laments the superficial interests of her peers ("It saddens me to think / That the only ones I see are mannequins / Looking stupid, being used and being thin / ... / The way they act, I'd rather be fat than be confused"), modern schooling ("... they never teach us / A thing I want to know / We do Chemistry, Biology, and Maths / I want Poetry and Music and some laughs"), and the expectations set upon her, presumably by her family ("If you're looking at me to be an accountant / Then you will look but you will never see / If you're looking at me to start having babies / Then you can wish because I'm not here to fool around"). I love her lyrics.

Of the remaining songs, none really break new ground. That isn't to say they aren't good, it's just that "The Model" and "Women's Realm" sound like they could have been outtakes from The Boy with the Arab Strap. Jackson's "The Wrong Girl" is a straight-forward pop song with simple lyrics that somehow manages to be quite catchy, and that works well, but others just don't sound new. ("New" being relative here, since this album is eight years old at the time of writing.) 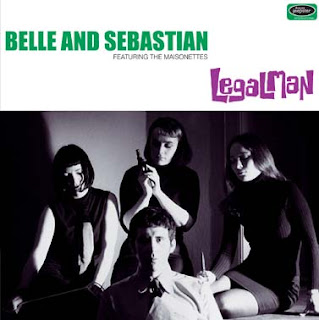 My question is, why does the Legal Man EP sound so ahead of this album, a step further in terms of quality, songwriting, and style, when it came out just a month before Fold Your Hands? The title track is a blatant 60s revival, with vocals, guitars, and keyboards straight out of some imaginary 1964 pop classic. The reverb on the guitar is intense (in a good way). The lyrics, though, are something of a humorous parody about love using business terminology. "Judy Is a Dick Slap" has a curious title but is in fact an instrumental... with awesome synthesizers and a good bassline. And "Winter Wooskie" is a slightly weird song more typical of the band, but with bassist Stuart David singing lead. The lyrics are a bit odd but apparently about filming a girl walking by the singer's window in winter. It works well. 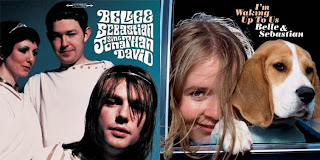 Two other EPs/singles were released in 2001 (Jonathan David and I'm Waking Up to Us), again with no overlapping tracks from Fold Your Hands. In both cases, the lead tracks are fantastic and the backing tracks are decent but not stand-out, much like half of Fold Your Hands. The Legal Man EP, though, is three solid tracks that make me wonder why the album didn't feature more arrangements and ideas like those. Between the two works, the band must have been trying out several things, and perhaps they decided the three EP tracks belonged in one group and the eleven album tracks in another. Who knows.

In the end, Legal Man makes for a fantastic EP but Fold Your Hands Child, You Walk Like a Peasant is a merely good album. It's far from bad, but it just doesn't live up to expectations from earlier albums or to the brighter tones of later work. The problem is not that there are other singers and songwriters besides Murdoch prominently involved, as other reviewers tend to suggest, but rather that the arrangements tend to be either too plain or too similar to familiar territory. However, the lyrics are often great, and there are plenty of subtleties that are quite rewarding. For a fan of the band, this album is worth having and listening to, but for a casual listener, this might very well end up as the last pick. This album is not outstanding, but it's not bad or particularly disappointing. It's just a bit reserved and subdued.

Scores:
Fold Your Hand Child, You Walk Like a Peasant: C+
Legal Man EP: A
Posted by Patti at 9:00 PM