In the last six months or so I bought the reissues of the first three Billy Bragg albums. I'd known about the man for a couple years because of a friend (thanks, Gabe) and Bragg's collaborations with Johnny Marr and The Smiths. I bought the first album and liked it so much it didn't take long before I got the next two, and I think it's inevitable that I'll end up acquiring a few more before long. I could easily write reviews for each of the three albums I have, and eventually maybe I will. (It's always nice to be optimistic.) 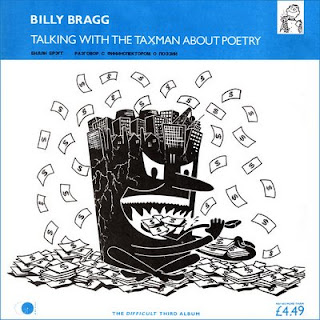 Billy Bragg is basically a folk musician, but unlike most singer-songwriters (myself and David J being the only other exceptions I know), he uses an electric guitar while playing solo. His music began as just guitar and vocals, but he gradually began adding more instruments and eventually even assembled a band. Talking with the Taxman About Poetry is his third album and finds Bragg still alone with his guitar quite often, but many tracks feature overdubbed guitars and occasionally bass, horns, mandolin, or piano. A few even have backing vocals and percussion (but no drums!). Lyrically, Bragg fits in quite comfortably in the folk tradition, even as he leans towards a more rock sound as time has gone on. He usually sings about love and politics, and in both cases, from a variety of angles. I like his guitar parts, but his witty lyrics might be even better.

The album opens with "Greetings to the New Brunette", quite possibly the strongest song on the album. It is Bragg's first real pop-esque song, and his most arranged up to that point. Studio sounds and effects can be found here and there, and percussion, bass, backing vocals from Kirsty MacColl, and lead guitar from Johnny Marr all grace this track. Marr's guitar is great, but Bragg's lyrics really lift the song to a higher plane. He finds a great way to discuss relationships with getting clichéd, as for example: "Shirley, you're my reason to get out of bed before noon". Somehow Bragg manages to wrap up his two primary subjects into one song. The narrator discusses his relationship with Shirley, a socially progressive woman who seems to make the narrator rethink his ways: "Shirley, your sexual politics have left me all of a muddle / Shirley, we are joined in the ideological cuddle". Although he stands by his love, the narrator does seem to get a bit frustrated partway through: "Shirley, you really know how to make a young man angry / Shirley, can we get through the night without mentioning family?"

"The Marriage" begins with a great trumpet part and features several overdubbed guitars to great effect. (I wonder if Bragg took a cue from the Smiths via Marr.) The instrumental in the middle of the song has a great part with three rapidly descending chords that I could listen to a hundred times. Again, the lyrics are fantastic; the chorus is: "And marriage is when we admit our parents were right". Bragg takes the anti-traditional perspective of shunning marriage in favor of just loving and living: "If I share my bed with you / Must I also share my life? / Love is just a moment of giving / And marriage..."

"Ideology" is the first purely political song on the album, and it harkens to the sound and feel of Bragg's first album, with just a solo guitar, a vigorous indignant, strongly accented voice, and a lot of reverb. Bragg uses the song to criticize politicians interested more in financial and personal gain than the common good. Apparently the song is based off of Bob Dylan's "Chimes of Freedom". 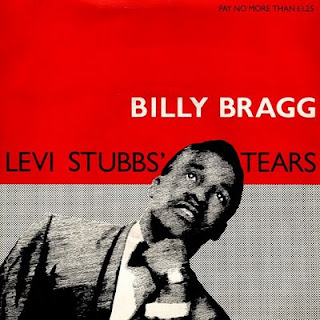 "Levi Stubbs' Tears" is perhaps subtly political and subtly romantic, much like "The Marriage". The female figure of the song married "one of those blokes, the sort that only laughs at his own jokes", and the stress of their marriage led to him shooting her, but, for better or worse, she lived, leaving her quite alone with her Four Tops cassette. Their lead singer, Levi Stubbs, remains as something of a constant through her upheavals. The music is mostly just a guitar, but the namechecking bridge kicks it up a notch with some tambourine, and the end has some drum bops and a horn part.

"There Is Power in a Union" is a traditional adaptation (of "Battle Cry of Freedom"), done with just a guitar or two and some extra vocals for the anthemic chorus. The title is self-explanatory, and the song is a clearly an old union chant appropriated by Bragg for relevant contemporary politics. This is appropriately followed by "Help Save the Youth of America", which cracks me up: "Help save the youth of America / Help save them from themselves / Help save the sun-tanned surfer boys / And the California girls". Beyond the humor, Bragg makes a point: "And the fate of the great United States / Is entwined in the fate of us all". America can get quite wrapped up in itself, but, "The cities of Europe have burned before / And they may yet burn again / And if they do I hope you understand / That Washington will burn with them / Omaha will burn with them / Los Alamos will burn with them". Omaha sticks out as a sore thumb (especially as that's where my parents are from!), but I take the point to be that even smaller cities are still a part of the big picture (although it may not be coincidence that there is a significant air force base, including the headquarters of US Strategic Command, in Omaha).

"The Passion" is a sad song about a marriage slowly splitting apart, featuring Marr again on lead guitar and MacColl on background vocals. "The Warmest Room" is a resoundingly upbeat song that goes all over the place but seems to focus around some strong feelings for another person that appear to be requited. And "The Home Front" is sort of about family politics, about a traditional, fairly conservative family structure. Gender roles are uphold, the "quiet life" is the ultimate, "the lonely child looks out and dreams of independence", and "nostalgia is the opium of the age". The family seems to ignore and generally not understand politics, but it is Bragg's aside that add the poignant edge: "If paradise to you is cheap beer and overtime / Home truths are easily missed", and "If it takes another war to fill the churches of England / Then the world the meek inherit, what will it be worth?"

Not every song is a winner, to be sure. I like all the ones I described above, but the others are a notch lower. "Train Train" is an old cover that, despite some nice viola and guitar parts, has fairly and uninteresting typical lyrics. "Honey, I'm a Big Boy Now" uses a harpsichord to get a more country sound or something. It feels like a song that'd be played at a bar in the 30s, which was probably the point, but I think Bragg can sing about a girl leaving a guy for someone else in a better way (and he has). "Wishing the Days Away" also has a more country or folksy feel, and again, the traditional theme of be impatient for a phone call or meeting with a loved one could simply be far more interesting.

The common theme in all three of these lesser songs is that Bragg sings about relationships in the same context as everyone else, and instead of adopting folk to a more interesting rock blend, he tries to use older, tried-and-true styles that aren't quite his own. When Bragg gets more adventurous and creative, he makes far better music. He can sing about families, government, and love in plenty of ways and bring up some worthwhile ideas, but when he falls back on what's been done before, it's not nearly as interesting.

The reissue adds a second disc of ten tracks. None of them are totally awesome, but a few are worth a good listen. The first two ("Sin City" and "Deportees") are covers done with Hank Wangford, a mandolinist and singer, and the third is an instrumental version of "There Is Power in a Union" done with producer John Porter on mandolin. Each was released as a b-side at some point, but these aren't your typical Bragg fair. Even those these are very folky, traditional songs, they don't sound quite as trite as the songs I complained about from the original album. If you aren't a folk fan, though, you probably won't like these songs. (Personally, I think some folk music is really bland, but some is great, and Bragg transcends even that with his best material.)

There are three alternate versions of album tracks, each of which just sounds lower-fi and has some different lyrics and plainer arrangements. The four real outtakes are fairly interesting. "The Tracks of My Tears" is a fairly un-special cover of a Miracles song; it's not bad but not standout. "A Nurse's Life Is Full of Woe" and "Only Bad Signs" are unadorned but nicely done. The former is often difficult to decipher (and is one of the few songs for which I cannot find a lyrical transcription online) and the latter is a decent way of lamenting that a loved one is with another person. "Hold the Fort" is a traditional cover, another old union anthem. It is done a capella with vocals from Robert Handley.

The bonus disc may not be worth repeated listens and a few of the album tracks might be duds, but most are winners, and I deeply appreciate Bragg's music and lyric sensibilities. His politics are a bit radical and a bit strong, but I like that he actually bothers to write about the things he sees wrong in the world – as my mother has pointed out, no one else seems to be writing about modern politics anymore. (Contrast with CSNY's "Ohio" from 1970, quite a number of late 70s and early 80s punk and new wave bands, 60s Bob Dylan, or 70s John Lennon.) Furthermore, when he does sing about relationships, he usually branches out from the standard language and vocabulary of love songs. He tries to explore different situations and do something a bit unusual. I heartily appreciate these efforts, as I think they are not in vain. Folk rock music like this is hard to come by.

Scores:
Original album: A-
Reissue: B-

P.S. I should consider giving a bonus point for the awesome subtitle: "The Difficult Third Album".
Posted by Patti at 7:57 PM