I don't want to focus so much on the Smashing Pumpkins, but I've been thinking about writing a review of their latest single ("G.L.O.W.") or their latest music videos or something, and after watching their new DVD, I decided I had to say a few words on the topic. Here goes:

Disc One:
01. "If All Goes Wrong" documentary
02. "Voices of the Ghost Children" featurette
03. Interview with Pete Townshend 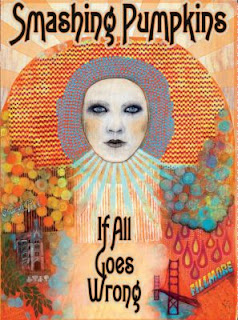 I didn't quite know what to expect when I bought this DVD. I figured the second disc would be predictable, but I wasn't sure what the documentary would focus on. It essentially covers the Smashing Pumpkins' residencies in Asheville, NC and San Francisco, CA in the summer of 2007, right as Zeitgeist was released and right after their first reunion shows in Europe. The band played nine nearly-consecutive shows at the Orange Peel in Asheville and twelve at the Fillmore in San Francisco. The idea was that the band would tighten up, have an opportunity to write new songs, and perhaps have a certain degree of dialog about the material with the audience.


The documentary semi-chronologically follows mainly the band throughout the nights and but also frontman Billy Corgan during the days while he tries to write songs. Several songs are singled out and described; we are told when each of these songs was written and first performed (often just a day apart) and Corgan often explains how the songs fit into what is going on around him. Most relate directly to his experiences with the audience and his environment across the six weeks of the residencies.


Considerable time is given for Corgan to explain that he feels held back by his audience, that they are living in the past and don't want the Smashing Pumpkins to grow and change. He continually talks about trying to move on have a new start beyond his band's former identity. This strikes me as interesting for several reasons. First, when Corgan first put an ad in local Chicago papers saying that he wanted to reform the Pumpkins, he explicitly said he wanted his old songs back (after adamantly refusing to play them during Zwan and solo tours). Second, his setlists from the first reunion shows in Europe, the residencies covered here, the extended world tour thereafter, and the 25th anniversary tour that he just completed all are filled with old material. Granted, he has written many new songs while on tour that he frequently performs, but the tracks from Zeitgeist are infrequently performed live, especially on the latest tour, where they rarely appeared on setlists. Why would he overlook the obvious new material and favor old material if he's trying to get away from it?


A large conundrum here, though, is that in many ways, Corgan is moving on. He has written at least forty songs since reforming the band, in addition to adopting plenty of new cover songs, revamping old songs, and bringing back some forgotten songs (like the previously unperformed "Translucent" and "I Am One, Part 2"). As far as performing concerts goes, Corgan is doing exactly what he should be: mixing old favorites and overlooked songs with newly written material. He hasn't forgotten the songs that made the band great, but he's adding a new chapter to the story. He keeps talking about trying to move on, and he is. I wish he'd stop talking about it and ripping on his audience members and just do it. He doesn't need to proselytize – there are plenty of people out there picking up what he's putting down.


This doesn't mean that everything the Pumpkins are doing is great. I really like the American Gothic EP and many of the songs seen only in concert (especially "A Song for a Son", "Owata", and "99 Floors"), but Zeitgeist and the "G.L.O.W."/"Superchrist" single both sound so static and trite. I can't recommend them or any of the recent music videos, all of which are just flashy excuses to dance around without actually having any content. And at the same time, I recommend the EP and a concert ticket, even if the latter is expensive and I still don't really like how the band has been ending many of their concerts (such as the one I attended). This is partially addressed in the documentary when the band performs 30+ minute versions of "Gossamer" as their closer. One of these performances is included on the second disc, and it's really obnoxious. In the film, the band complains of people losing interest and the camera shows people yawning and leaving the concert early. Honestly: what do you expect? The still-long but significantly more tolerable 15- or 20-minute versions of the song have some really cool parts, but the 30-minute versions just drag on and have extended periods of senseless jamming. These things are fun to do in your basement (and I can attest to this), but they don't translate to the stage well.


The two bonus features on the first disc are of limited interest (just as the main feature, I suppose). The "Voices of the Ghost Children" segment is just fans saying typical and predictable things about the band and the reunion shows. They are obviously one-sided, just as most of the fans shown in the film itself. The interview with Pete Townshend is far more interesting, as he talks about the relationship between musicians and fans and his own experience with residencies.


The second disc is decent. It compiles fifteen songs from the Fillmore residency and makes a good setlist out of them. Some songs are done acoustic or with sparse instrumentation, and some are full-band. The performances and sound quality are top-notch, and the song selection is appreciable outside of a few songs that are just metal-riff jam-fests. The eight-minute rendition of "Blue Skies Bring Tears", though, manages to be a heavy song that totally rocks and sounds great. The main set is augmented by five songs from a rehearsal done on July 27, 2007 on the floor of the Fillmore. There are a few repeats with minimal differences from the stage versions, but the two extra songs both sound good. My main problem with all of the live performances on the disc is that the mix really favors the guitar and drums (which are conveniently the instruments played by the only two original members). Ginger Reyes' bass and Lisa Harriton's keyboards (and all the backing vocals) are frequently nearly inaudible.


When it comes down to it, I'm happy to have the Smashing Pumpkins back. Honestly. Corgan talks a lot about how his fans won't trust him, but I do. I think he often treats the people around him and his audiences fairly poorly, but he's still a good songwriter and musician. He's not always spot-on these days, and that's fine. I'm confident that he will continue to make music that will occasionally shine brightly. I'm willing to accept that the band must evolve and that the personnel involved must also change. The new members fit their roles well enough, and although I think nearly everyone would like James Iha or D'arcy back, it is understood that they are not interested in participating, and that's fine. They've moved on in their own ways. I do, however, find it a bit inappropriate for the documentary to use several interviews to minimize the role those members played in the band – especially in having one of the band's soundmen, Kerry Brown, reiterate this with a title under him mentioning his status as D'arcy's ex-husband.


Corgan must understand that not everyone will follow him everywhere he goes, but he cannot deny that many people will. (Zeitgeist has gone gold in the US, so there's at least half a million people on board.) He doesn't need to rant about moving on, he should just do it. Instead of berating his audience and lamenting the disinterested people, he should simply let his audience know that he wants to explore new directions and then go for it. People will listen.


Scores:
"If All Goes Wrong" documentary: D
"Voices of the Ghost Children" featurette: C-
Pete Townshend interview: B
Live at the Fillmore: B
Entire package: C 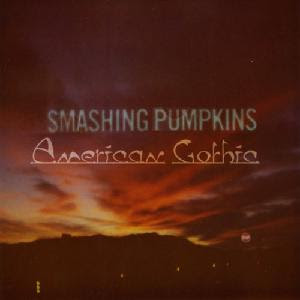