A long, long time ago (9 August 2003) I had a ticket in my name to see Neil Young & Crazy Horse at Starlight Theater in Kansas City, Missouri. However, my appendix intervened, and for the only time thus far in my life, I was hospitalized. I missed the show in order to have an appendectomy. And now, over ten years later, I've finally had a chance to make up for it.

Neil Young is never an easy character to pin down. His recent albums have been released on his own schedule and cover themes and styles that are almost as varied and unpredictable as his 80s albums. He's been touring with Crazy Horse, but then reunited briefly with Crosby, Stills, and Nash for his yearly Bridge School Benefit shows, only to then suddenly announce a few sporadic solo shows in select North American cities. He also surprise-released his new covers album (A Letter Home) on the day before this show.

I saw his second show in Dallas, and I would argue that I got the better performance of the two nights, based on setlists and other reviews. Apparently, Neil got a bit upset at the hecklers on the first night, so he skipped a few of his stories. There were certainly hecklers the night I saw him, but they weren't as malicious. (Certainly makes one wonder why someone would pay a hundred or hundreds of dollars just to piss off their favorite musician.) The second night also got two more songs. 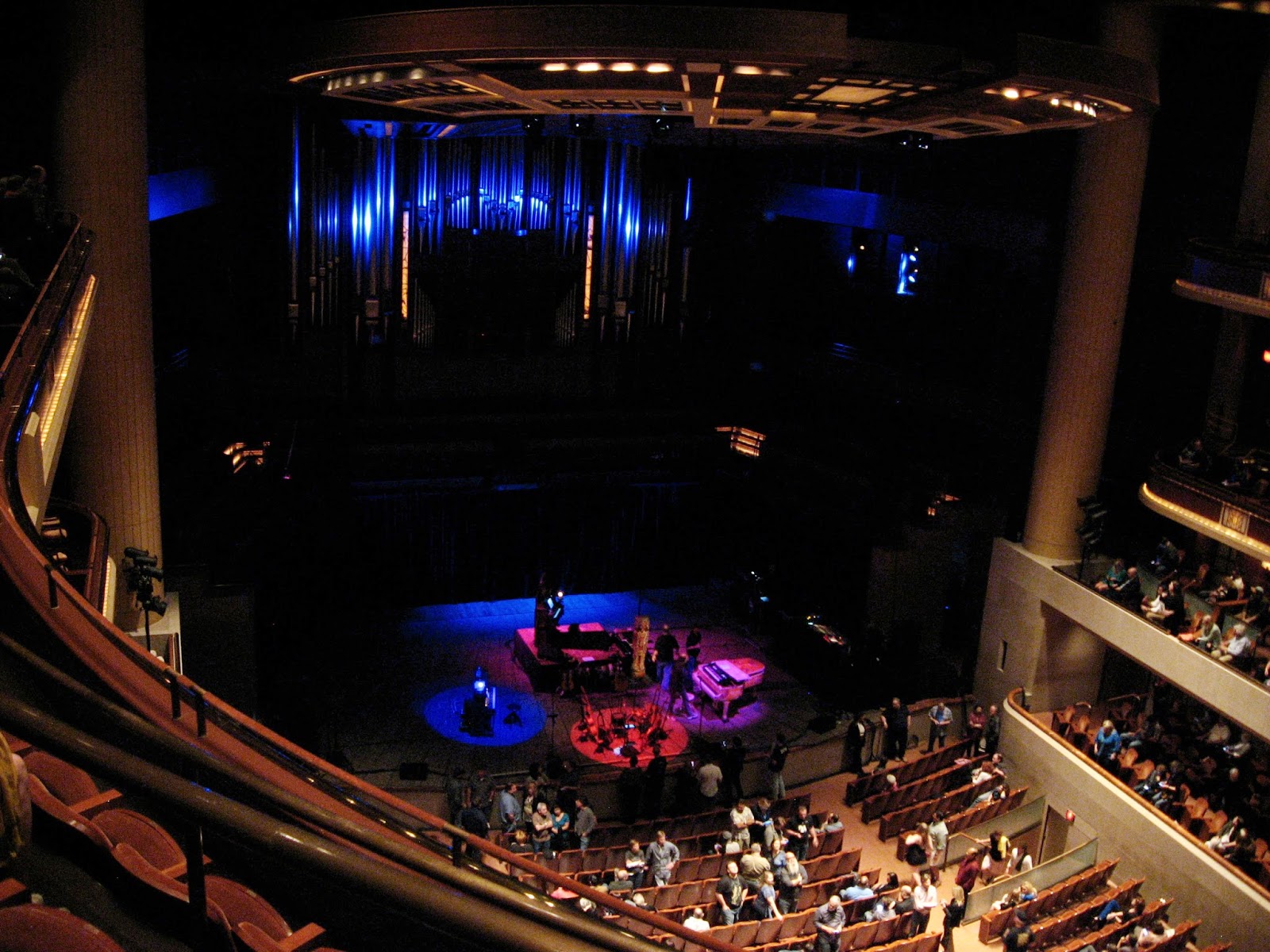 [The inside of the Meyerson.]

Neil's choice of venues does make me wonder, though. He seemed to be selecting venues with the best acoustics possible for this solo pseudo-tour. He remarked at the show that the Meyerson was one of the "top two or three places in the United States". Perhaps he is preparing concert recordings for a live release? There was a gigantic mixing board off to the side of the stage, which would be overkill for most solo artists, but I suppose Neil has a certain affinity for sound quality even if there's nothing more to it than that. In any case, I can't argue with Neil's statement; the sound was incredible. I could hear every note perfectly and it never got so loud that I needed my earplugs. (For reference, I always wear earplugs at concerts, because otherwise I can hear my ears distorting the sound.)

Apparently the venue is seen a model institution; it is featured in multiple books on acoustical architecture that I have, and a colleague told me that it was discussed in an acoustic course he recently took. Part of this acclaim can be attributed to a rather novel feature of the venue: heavy concrete doors can hide or expose large reverberation chambers above the balcony seats, meaning that the venue can easy adapt itself to the ideal reverberation times of a variety of styles. It was hard to tell, but I think the chambers were open for Neil. 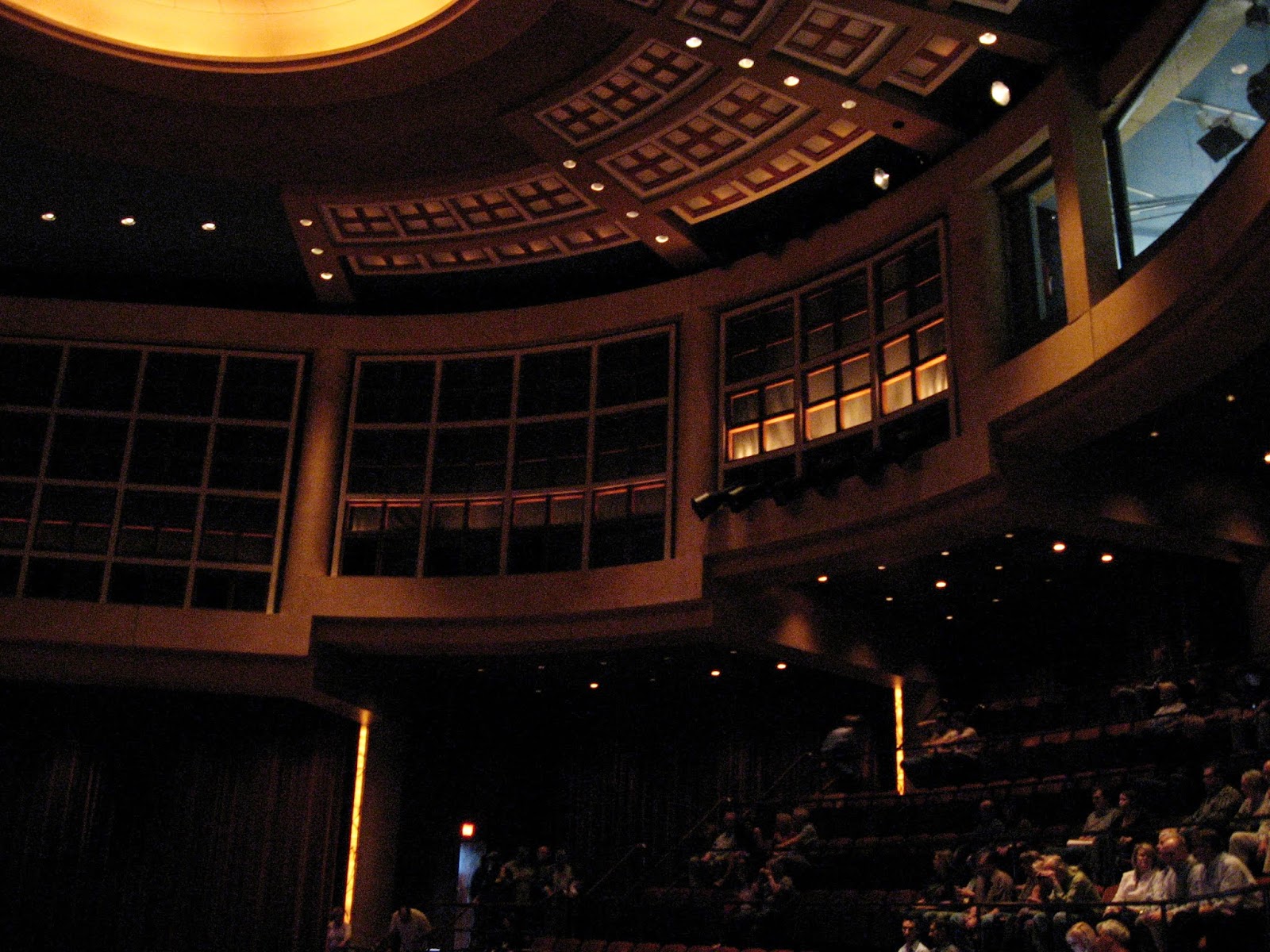 [The openings to the reverberation chambers.]

Anyway, all of that discussion is necessary to say that the show was quite special even without considering the actual performance quality. And thankfully, the performance was great. Now, everyone knows that Neil is not a perfect singer, but he is distinctive, and he can sing quite well when he chooses. As Neil has aged, his voice has surprisingly not changed greatly. It might be a touch more gravelly, but his range is practically the same as it ever was. (He couldn't hit the highest notes in "Mellow My Mind", but he didn't actually hit them on the record in 1973, either.) His musicianship is also sometimes loose or rough around the edges, but he has an uncanny ability to make this seem legitimate, like it only makes him more authentic. Generally, though, he never hits a wrong note, and I think he views timing as being more about feel than exactness. 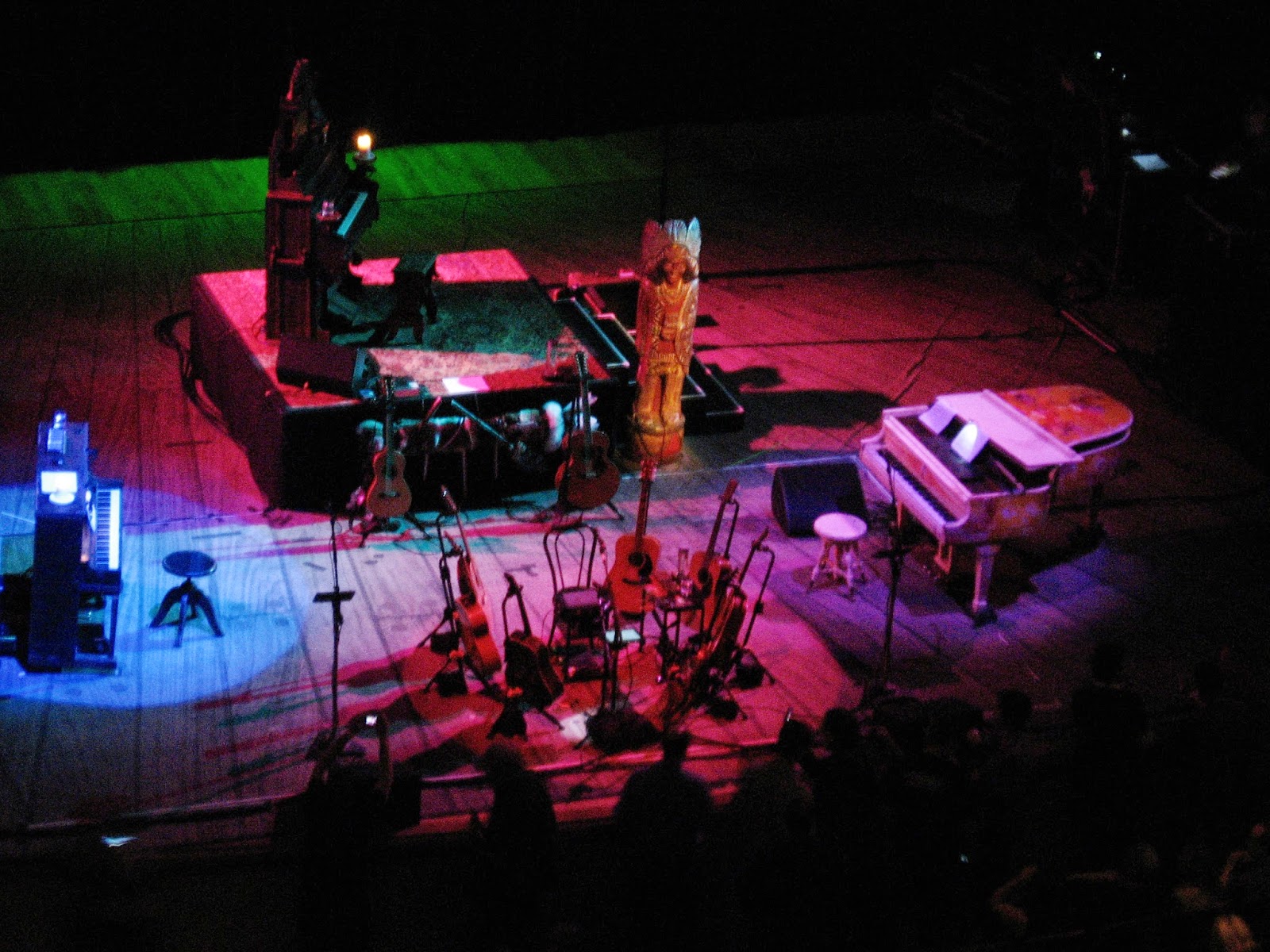 The stage was arranged with a circle of guitars (and a banjo) up front and center, a couple more guitars and a statue of a Native figure behind that, a grand piano (painted by his daughter, according to Neil) on stage left, an upright tack piano on stage right, and a pipe organ on a raised stage in back. In total there were eight acoustic guitars, plus the banjo. I think two of the guitars were twelve-strings. Neil introduced several of the guitars with extended stories when he picked them up.

Actually, Neil spent a large portion of the night just telling stories. He was a little rambly at times, but he has a sort of captivating charm such that you wouldn't want to miss any of the wisdom he might impart. Some of the stories were fairly interesting; he held up one of the guitars to show the work that had been done on it after a previous owner was shot while playing it. He also claimed that a hotel lobby wall with two buttons, labeled "Man" and "Maid", was the inspiration for a "A Man Needs a Maid". Other monologues were more humorous, such as his repeated comments about sleep, or political, such as his repeated comments about water. His best quote: "Sleep is great. Almost as much as water." 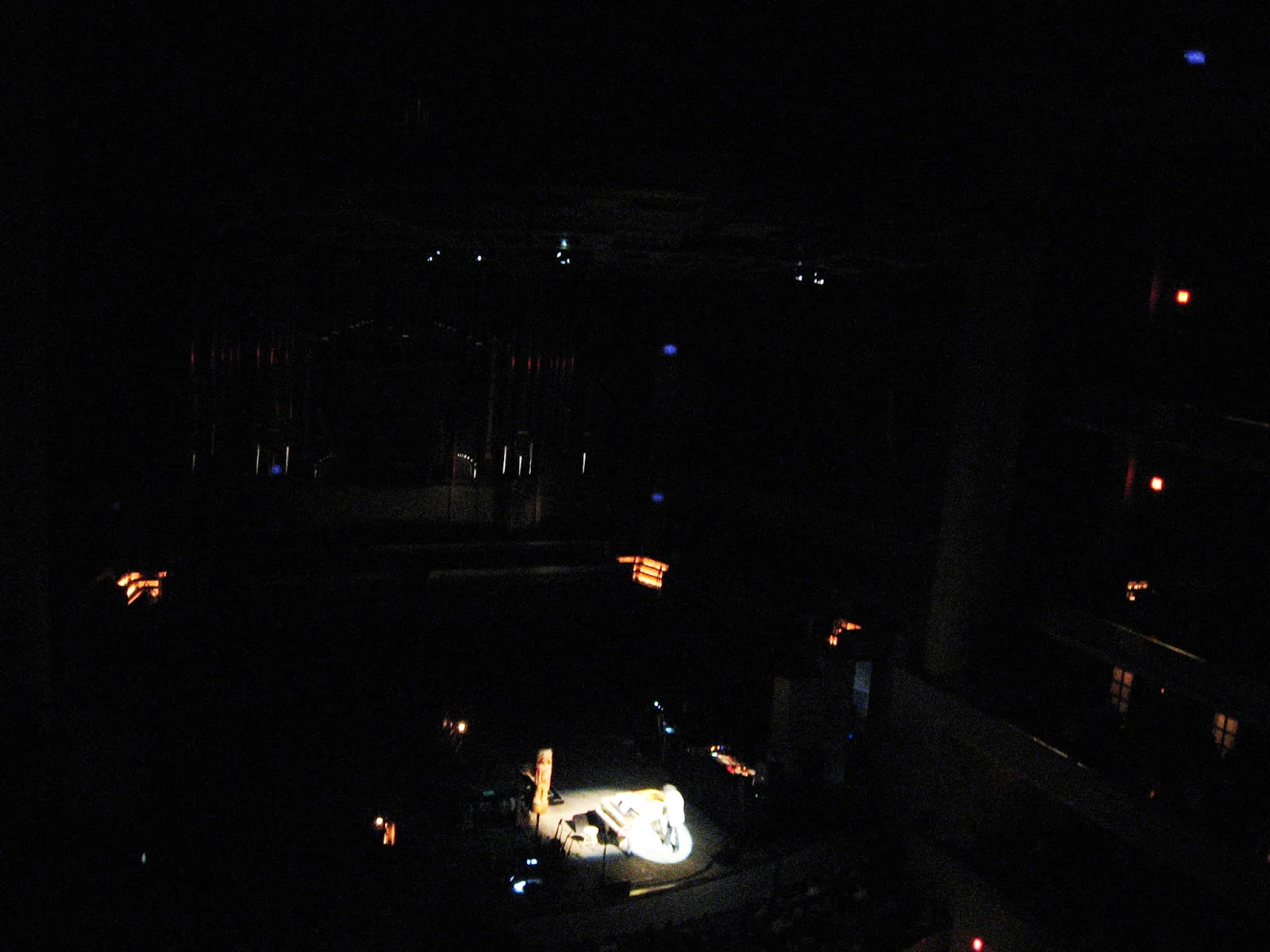 [Neil Young talking about his piano.]

As far as the setlist goes, I couldn't have asked for much more. While he played a few songs I don't think are very special ("Philadelphia", "A Man Needs a Maid", "Harvest Moon"), he also did many of his best, including obvious crowd-pleasers ("Old Man", "Heart of Gold", "Ohio", "Southern Man") as well as excellent album cuts and obscurities. He even played what may be my personal favorite of his, "Pocahontas" (on a 12-string!). "Mr. Soul" was done on the pipe organ, giving it an odd drone feel not too distant from his electronic version on the wonderfully strange Trans album. "A Man Needs a Maid", while not one of my favorites, was given a more complicated arrangement in which Neil switched between the grand piano and a synthesizer for different sections.

The recent solo setlists have been notable for including several covers, but of course that's because he just recorded them for his new album. Hardin's "Reason to Believe" didn't seem anything special to me, but I thought Ochs's "Changes" was quite good and Lightfoot's "If You Could Read My Mind" was modestly good.

Some of the most special moments were the songs that Neil doesn't play very often. "Thrasher" is the most obvious – until this tour, it hadn't been played since the original Rust Never Sleeps tour in 1978. It's a great song with some of his best lyrics, and despite the adoration of the fans, Neil just doesn't play it. Since it has long been rumored to be about CSNY and Neil's departure from that scene in the 70s, it does not bode well that he has resurrected the song after a brief CSNY reunion and comments from Graham Nash that a full tour was not out of the question. All signs point to Neil not wanting to be tied down and held back, "lost in rock formations", or turned into "park bench mutations". Other lyrics include this: "So I got bored and left them there / They were just deadweight to me / Better down the road without that load".

A couple other songs were unexpected surprises as well. "Love in Mind" has been played very rarely since its Journey Through the Past tour debut in 1971, and the extended and political "Someday" was played only twice between its origins in the Freedom era (circa 1989) and this tour. Lastly, the solo acoustic version of "Cortez the Killer" has been fairly infrequent. The electric version is far more common, but I found this version quite compelling as well. 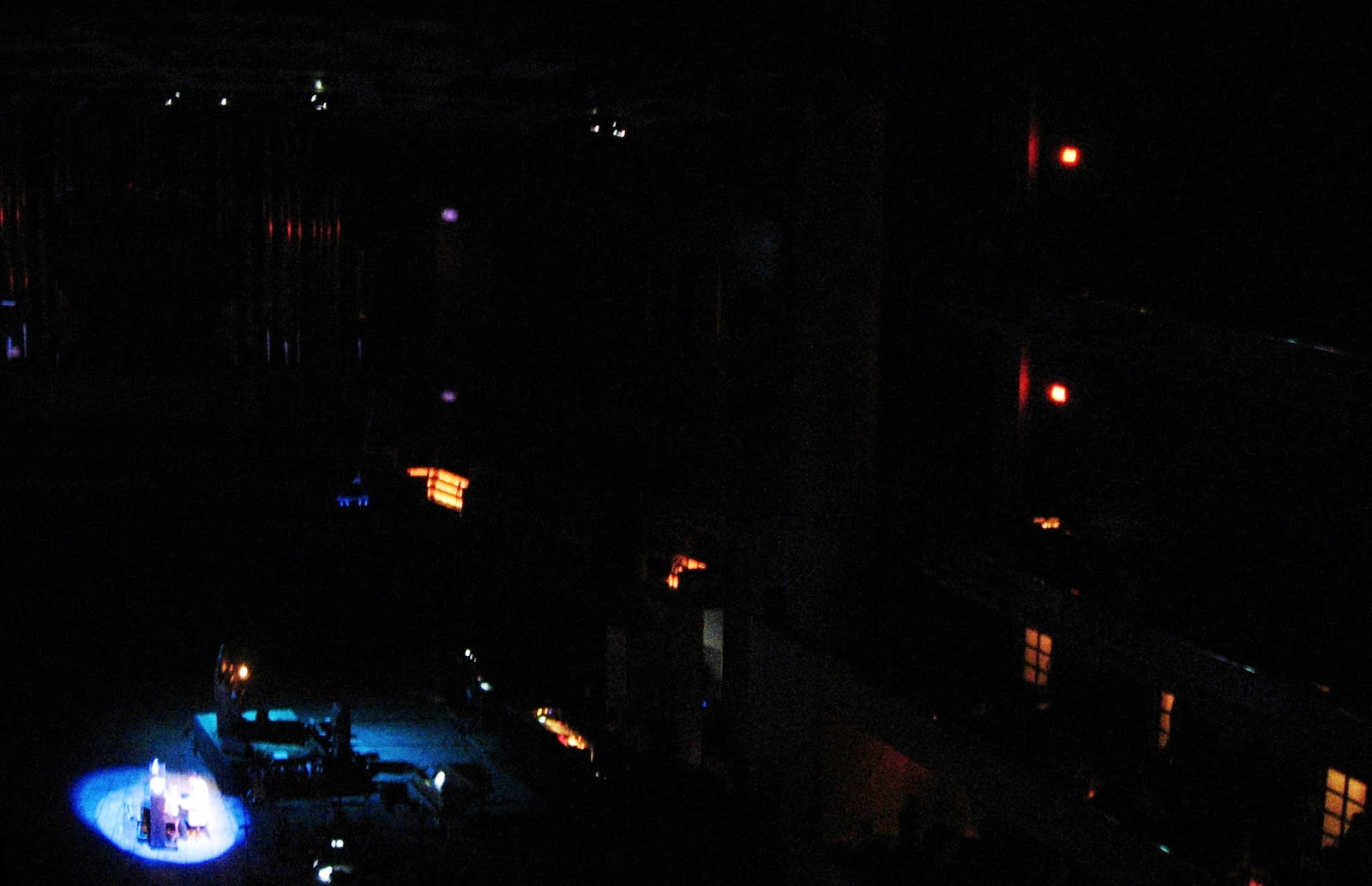 There was hardly a misstep during the whole show. Neil's banter may have been a little fragmented, and hecklers may have been a little annoying, but he didn't let any of that get him down. It's hard to make any other complaint. Neil played well, the venue was amazing (minus all the drunk people), the setlist was superb, and I was pleased that Neil hasn't toned down his politics. It's a rare opportunity to see such a renowned singer and songwriter in such good venue.

P.S. Thanks to Alyssa and Cheryl!
Posted by Patti at 4:30 AM