After missing my chance to see The National at the Austin City Limits Festival last year (day three of weekend two was canceled due to flooding), I was quite disappointed that all my studying up on the band was left somewhat unfulfilled. When I heard they were coming back to one of Austin's best venues for two nights, I immediately bought a ticket. (They later even added a third night!) I became even more excited after learning the opener was a band that had begun to show up on my radar with good praise.

Warpaint was just in town for SXSW, but because I already had this ticket, I decided it wasn't worth seeking them out there. At this show, they thanked anyone who had seen them there, but admitted that SXSW "was a bit of a shitshow" and that they were much happier to be playing in a "proper venue". It isn't hard to see why a band would prefer a spacious venue with good acoustics and plenty of time to set up and soundcheck over a hasty, rushed affair in some smaller club amid a mess of competing musicians.

I started hearing about Warpaint because they seem to be grouped in with the contemporary psychedelic crowd, which I have been hearing a lot about because of SXSW and the upcoming Austin Psych Fest. Warpaint have the distinction of being an all-woman band, as well as having a sound unto themselves, apart from any psychedelic connotations. I can see the relationship to that concept, but they merge the floaty, ethereal guitars of The Chameleons with a very rhythmic, rooted, earthy bass and drum feel. The solid, danceable beats with the flexibility of multiple singers reminded me just barely of The Slits or The Raincoats, or maybe even Gang of Four or The Au Pairs.

I consistently found myself mesmerized by the rhythm parts, studying the bass and drums and letting the vocals, guitars, and keyboards float through my awareness. That isn't to say the guitars weren't good; they are, after all, what drew me in to the band initially. I love the sound of delayed, atmospheric, effects-laden guitars, but I think this band lets the guitars fill space around the other elements of the songs. 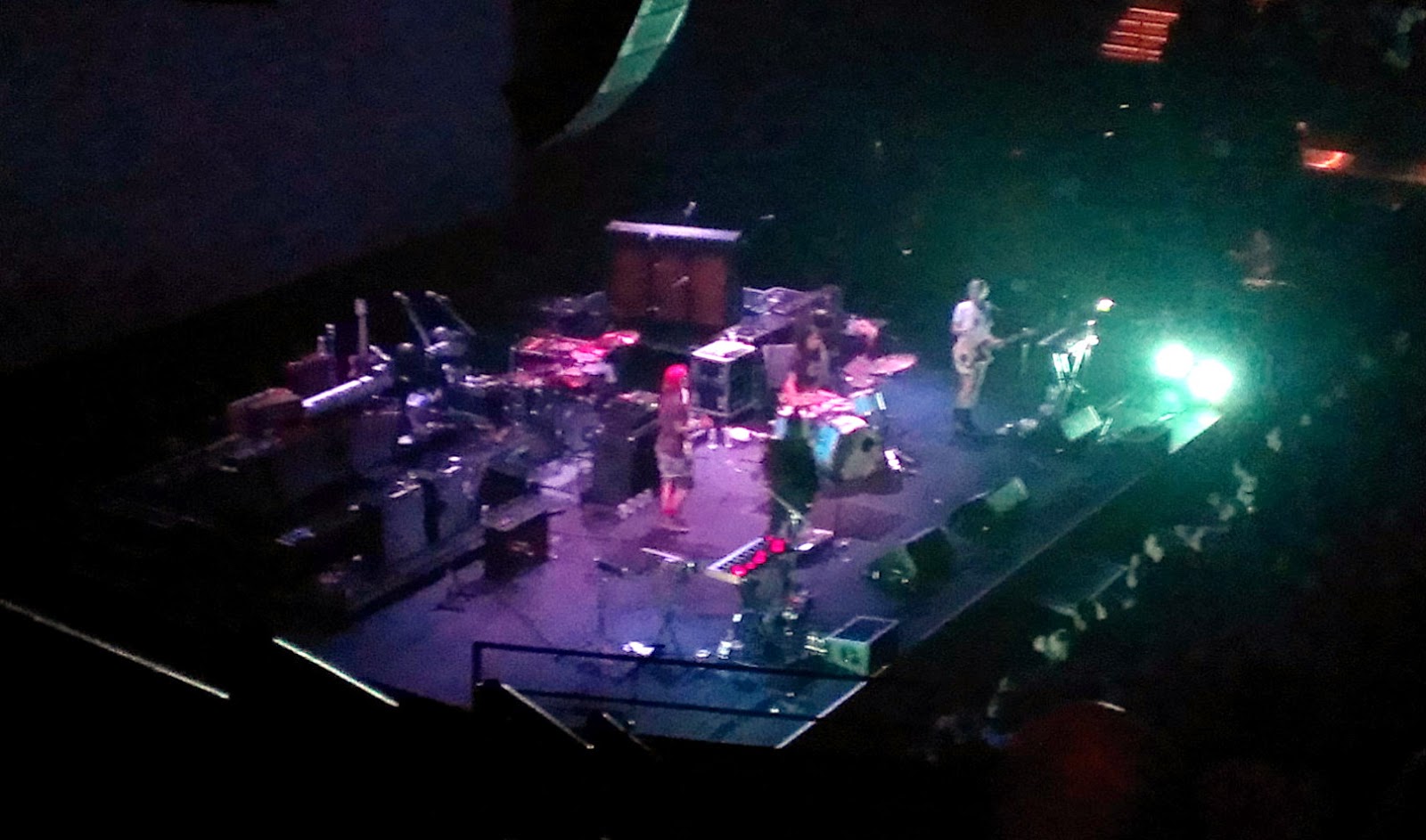 [Warpaint. Sorry for the poor quality of these pictures, but it's better than nothing.]

If I had to criticize, I would say that some of their songs got lost in a bit of a trancey haze. I think the band has a bit of a formula, and for the most part it works, but I'm excited to see how they can break the bounds they seem to have set for themselves. I want to buy their new record, and maybe it is slightly more adventurous, but on stage, they seemed to operate in just one space. Of course, I like that space, but I don't know if it will work for them forever. The other problem was that their lyrics were a challenge to understand, mostly because the vocals just weren't clear and distinct from the other high-range instruments.

The National came to my awareness thanks to the recommendation of a friend, and as such I bought their last two albums (High Violet and Trouble Will Find Me) in anticipation of seeing them at ACL. I haven't heard much of their back-catalog, but now I am rather curious about what it contains. Seeing the band live made me realize that the impressions I have of the band must be incomplete or inaccurate. While I really like both of the albums I have, they do have a bit of a privileged white male perspective, and a lot of the lyrics deal with family life and upper-middle class social environments. The music is a very orchestrated, refined chamber rock that manages to have just enough energy to be thrilling but not enough to be anarchic, chaotic, or anything near punk. The "dad rock" cliché would be fitting, inasmuch as it fits a band like Wilco, which is to say, hardly at all except that a lot of aging white males seem to appreciate the combination of mature lyrics, youthful but restrained energy, and a refined update of classic rock sounds. Obviously, I appreciate those things myself, but sometimes I can't help but wonder if I'm being played to, like it's a calculated game to appeal to a certain demographic. 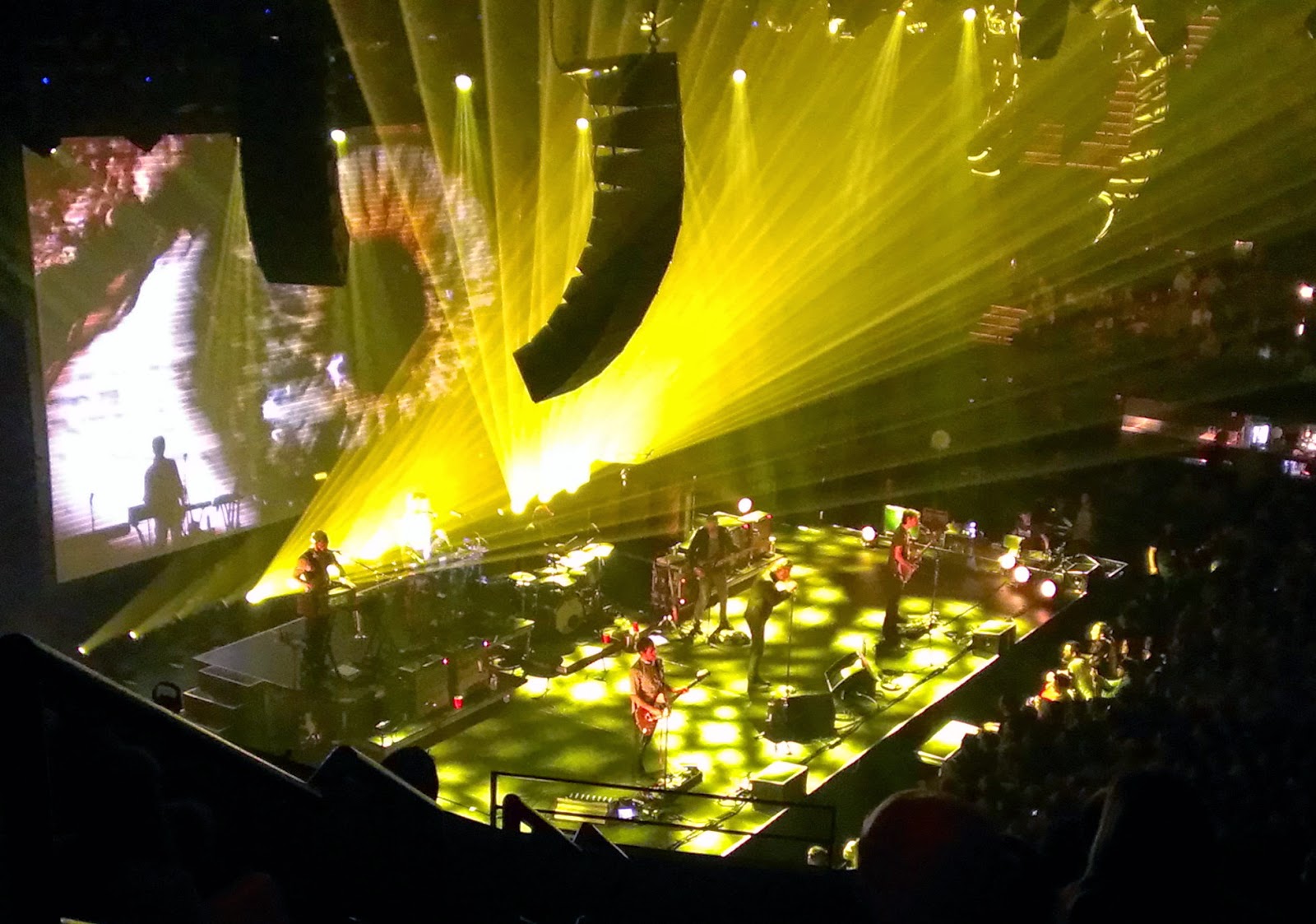 However, the concert experience defies this. The first sign was that there might have been more women in the audience than men. The second was that the age demographic was split fairly evenly between those around the age of 40 (as I might have expected) and those around the age of 20 (which I had not foreseen). Judging by the number of times I heard the cry of, "I love you, <bandmember>

The other strange thing is that the band seems just a little awkward or goofy on stage. I don't know how to explain this, but I almost feel like they don't know how to behave up there. While brothers Bryan and Scott Devendorf (drummer and bassist, respectively) didn't move or talk much, and twin brother guitarists Aaron and Bryce Dessner could only engage the audience at a minimal level (occasional mumbled offerings of thanks, occasional wanderings near the front of the stage with a raised guitar), lead singer Matt Berninger almost seemed to be overcompensating for the others. Despite his semi-conspicuous suit, he was already jumping on the stage monitors during the first song. It didn't take him long to start throwing down the mic at dramatic moments, or flinging water cups into the air, or jumping in the audience and running around while singing, forcing the stage hands to carefully watch the microphone cable. (The most hilarious moment of the show was during one of these jaunts, when Berninger straight up walked out a side door while still singing "Mr. November". He came back out right as the song ended.)

However, I certainly don't mean to write off the other members. I enjoyed watching the Dessner twins, although I have to admit I couldn't tell them apart at all. After doing some research, I think Aaron was on stage left and Bryce on stage right. Both mostly played guitar, but also sang backing parts and occasionally went to the back of the stage to play a piano. Aaron played harmonica on "Sea of Love", and halfway through the show I realized that on half the songs, Bryce was playing bass pedals with his right foot while also playing guitar and singing. Talk about coordination! His other trick was to grab an extra guitar for "I Need My Girl" and hit the headstock on the floor, letting it ring out and feed back at dramatic points. (This can be seen on several live videos, including this one. I actually like the effect enough that I miss it on the album version.) 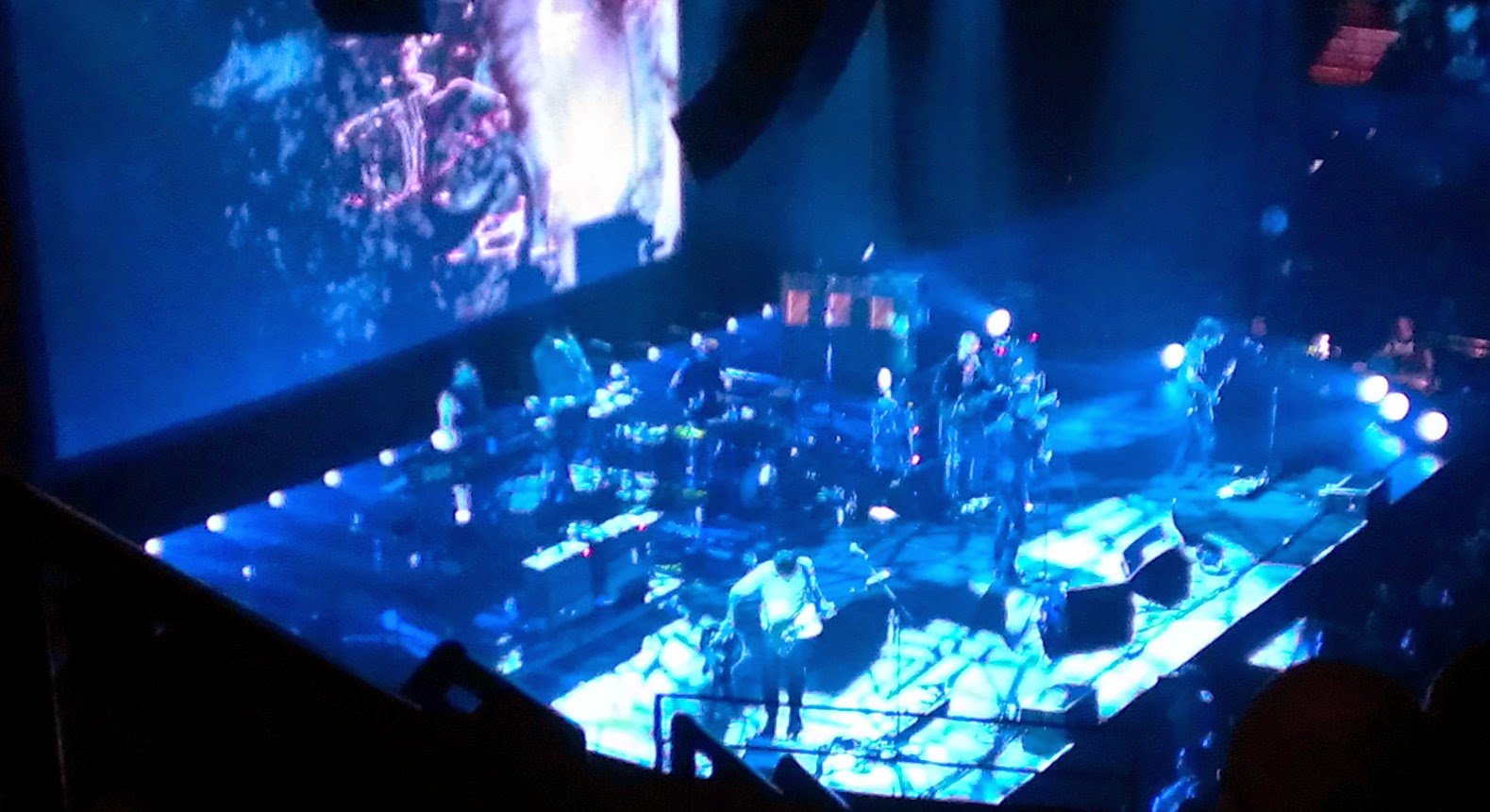 [Note Bryce, stage right, slamming a guitar into the floor.]

The other thing that stood out to me about the Dessner brothers was that they didn't really ever play a guitar solo. They played lead parts, but never took center stage to noodle about on the upper fret board. They focus more on making a cool part that fits the sound and movement of the song. They play guitar as if it were a violin in an orchestra – important, but not the only part of the picture.

I also appreciated that the band toured with two additional musicians, a trumpeter and a trombonist, both of which occasionally also played keyboards or other instruments. They allowed the songs to sound full and layered without requiring samples, gimmickry, or sacrifice of vital elements of the songs.

The setlist mostly stuck to the two albums I have, but there were several cuts from the preceding albums Alligator and Boxer. In concert, those songs didn't sound particularly out of place, although I couldn't understand any of the lyrics, because it must be near impossible to mix Matt Berninger's somewhat monotone baritone with all the other mid-range instruments. Of course, at times, he would shift into a shrieking yell unheard on the albums, but still indecipherable due to the nature of screaming. But for the songs I already knew, I could follow every word, and I remembered why I like the lyrics and their willingness to explore.

One of the songs I didn't know, "Ada", was introduced as being an old song (2007! So old!) that Sufjan Stevens had done a guest piano part that they admitted they would not be able to reproduce accurately on stage. Nonetheless, they dedicated the song to him, and at the end, I caught the horns players paying tribute by playing the wonderful part of Stevens' "Chicago"! I cheered, but hardly anyone else seemed to notice, and indeed the setlist I found online made no mention of the tease (until I added it myself!).

The other highlight was something of a gimmick, but one that I thought worked quite successfully. At the end of the encore, all seven musicians came to the front of the stage, pushed away the microphones, and played a completely acoustic, seemingly unamplified version of "Vanderlyle Crybaby Geeks". I still can't say I understand the meaning of the song, but I joined the audience in happily singing along anyway.

Much as I may have criticized the band, I still thought The National played a good show. It was fun, even if it was tempered. I'm interested in examining the back catalog a little further, and I'm impressed that the setlists of the two proceeding nights are actually substantially different than the show I saw.

Scores:
Warpaint: B+
The National: B

P.S. Thanks to Josh P. for the original recommendation.
Posted by Patti at 7:55 AM