A Few Thoughts on Devo

Devo has been on my mind a lot recently, ever since they came to my town on their Hardcore Devo tour in July. The tour was primarily based around their early material, particularly their home demos recorded before they signed a major label contract. I decided not to go, primarily because I find some of their early material to be problematic. In fact, after realizing that I didn't want to see the show, I started reevaluating my collection of Devo albums. I had bought their first four albums in rapid succession in 2005, and although I've listened to several of their other albums and collections, no others appealed to me enough to merit purchase.

Over the last two or three years, I've reviewed my entire music collection from start to finish. (Yes, it really did take two or three years.) In the process, I realized that my tastes had changed and that my ideas about collecting music were not the same as they once were. The complete story perhaps merits its own more complete post, but the short of it is that I started getting rid of anything I didn't connect with. Some things I'd outgrown (Everclear, Green Day), some just weren't actually very good (INXS, Adam Ant, Richard Lloyd, Daniel Ash), and some were things I'd bought because they were "important" but I just couldn't get into (Raw Power, Suicide, U2).

In this process, I realized that most Devo albums aren't actually very good. Devo's politics, social commentary, and satire are among the best commercially available, but their early and latter-day writing leans too heavy on relationship songs that are uninteresting, clichéd, or even repulsive. Musically, their creativity and experimentation appeared to peak with their debut album, and it gradually drifted away as their career progressed. They still managed to periodically write good tunes and wield clever concepts, but the rate of innovation took a sharp downturn.

As a result of this realization, I did something I've never done before: I sold everything except their first album and bought a "greatest hits" compilation. I'll save the detailed explanation of the personal significance of such an act for the aforementioned separate post, but I think Devo's career merits a greater discussion at present to justify my decision. 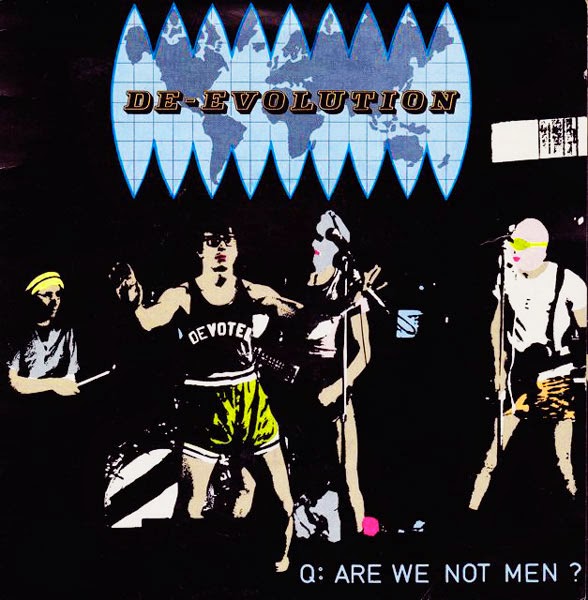 Devo was founded in the early 70s in Ohio in the wake of the Kent State shootings, the same source of inspiration for Crosby, Stills, Nash & Young's "Ohio". They started out as more of a performance art or cultural critique outlet based around the ideas of Gerald Casale and the long-forgotten Bob Lewis. Mark Mothersbaugh brought additional, similar ideas along with greater musical proficiency and equipment. As friends and siblings joined to form a band, Lewis gradually shifted to something of a management role before leaving under seemingly contentious grounds around the time the band signed a contract with Warner Bros. Records.

In the meantime, the band had been ceaselessly writing songs and recording homemade demos for years. Most of these recordings never saw the light of day until the Hardcore Devo compilations were released in 1990, although a few appeared on a supposedly official "bootleg" under the title Mechanical Man in 1978, and the best of the bunch were later re-recorded. The forgotten songs, the same ones being featured on the recent tour, are unfortunately a decidedly mixed lot. While the band had boundless creative energy, many songs were blatantly sexist. Although I realize they may have intentionally pushed the envelope in the name of satire, I find many of these early songs unlistenable for this reason. 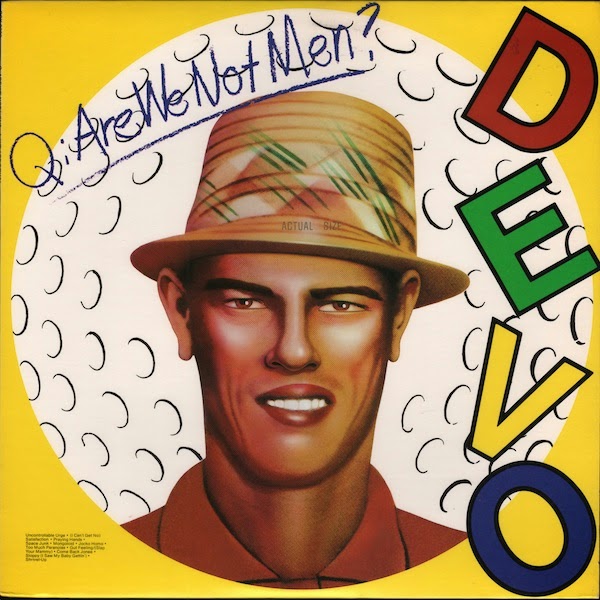 Nonetheless, by 1977, the band began releasing singles on independent labels and managed to catch the eyes of Neil Young and David Bowie. The next year, they recorded their debut for Warner Bros., Q: Are We Not Men? A: We Are Devo, produced and financed by a certain Brian Eno. Somewhere in the process, the more objectionable songs were filtered out in favor of a strong set of cultural and social critiques. "Jocko Homo" was a statement of purpose in 7/4, "Satisfaction" is among the greatest cover versions of all time (and it doesn't even use the signature original riff!), and "Mongoloid" challenges preconceived notions of developmental disability. The album is full of pointed sarcasm whose bitterness does not detract from the strength of the message. 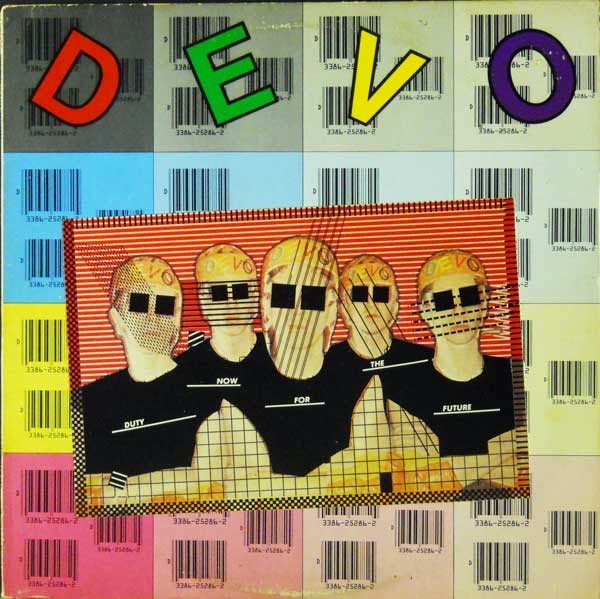 Devo's second album, Duty Now for the Future (1979), is a classic example of a sophomore slump. Most of the album featured further re-recordings of older material, but the song choices are decidedly second-rate. Only "Blockhead" and "Secret Agent Man" were successful reinterpretations, and "The Day My Baby Gave Me a Surprize" (sic) was the only worthwhile new song. The only other redeeming quality is the cover, which mocked the new requirement of placing UPCs on album jackets. Musically, the increasing use of synthesizers was somewhat intriguing, but lyrically, the album suffered terribly. "Pink Pussycat" is particularly egregious, but "Clockout" is also quite disappointing for taking a promising idea and going in a poorly chosen direction. 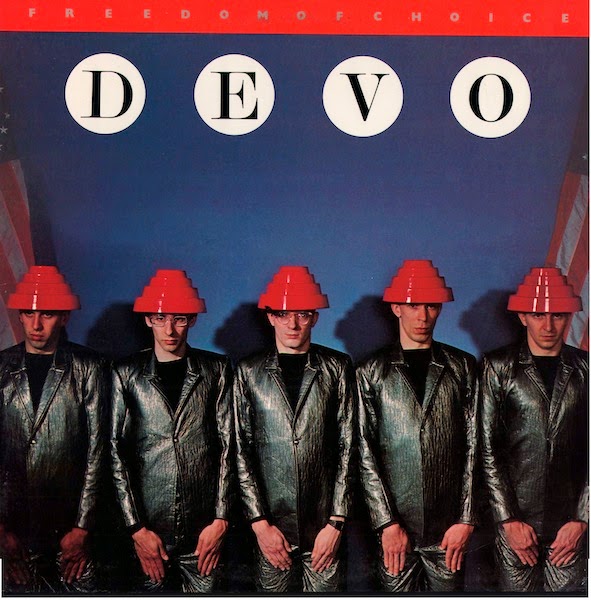 Devo's mostly widely recognized and best-selling album is probably their third, Freedom of Choice (1980). The band unabashedly embraced synthpop and produced an early landmark of the genre. It features their biggest single (at least in the US), "Whip It", as well as several other fantastic singles ("Girl U Want", "Freedom of Choice", "Gates of Steel"). But even if the stylistic traits and the singles excel, the rest of the album is a bit of a drag. Most of the songs just aren't very compelling, but a few ("Ton o' Luv", "Don't You Know") are outright bad. 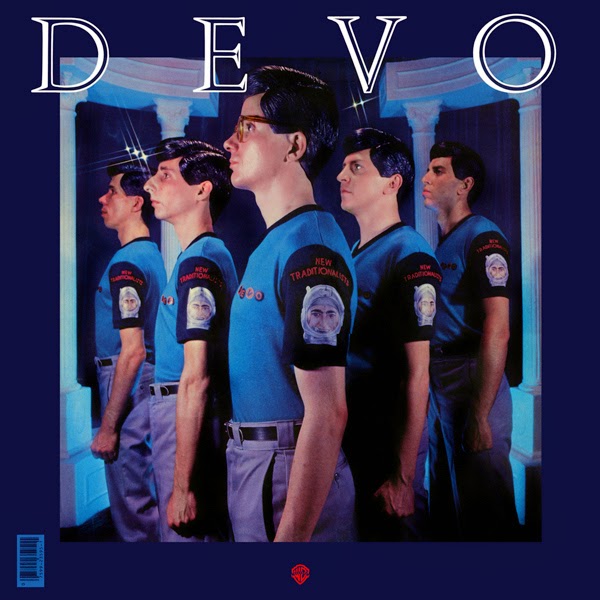 New Traditionalists (1981) follows a similar trend: the singles "Beautiful World" and "Through Being Cool" are excellent, but the rest is bland or worse. Almost all of the other songs are relationship-based and offer nothing clever or insightful. I don't even know what to make of "Love Without Anger".

There seems to be a pattern here. Devo has always been a band with great ideas, but new ones came increasingly infrequently, such that most of their albums after New Traditionalists are lucky to feature a single good song (e.g. "Post Post-Modern Man"). In their quest to challenge and critique, they've often been on the line, and their earliest work is often on the wrong side of it. Their debut features the cream of the crop of several years of songwriting, but no later album could live up to that level of consistency. The lesson to learn is that Devo should perhaps be considered a singles band. Their albums tend to contain a lot of filler around a small number of truly exceptional songs and ideas. 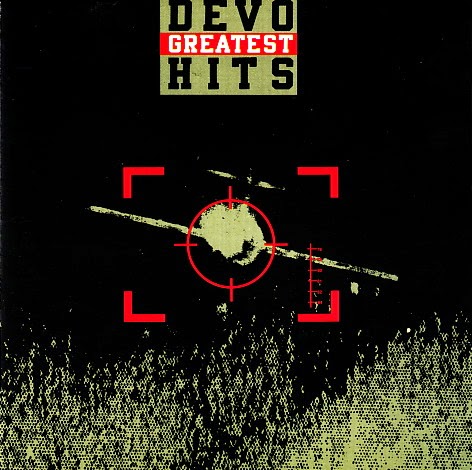 This should not be interpreted to imply that Devo is best forgotten or that they aren't worth the hype. To the contrary, Devo's contributions to underground and mainstream music cannot be overstated. They pioneered music videos, they presaged merchandising, they spearheaded synthpop, they practically invented postmodernism in music, they were outspoken advocates of the then-superior laserdisc (the precursor to today's DVD and Blu-ray), they resolutely believed in the idea that a true modern artist should provide a complete multimedia experience, and they did it all while criticizing and mocking the entire system that they existed within. They never backed down or sold out. That being said, the quality of their songs didn't always match the strength of their ideals, and especially early on, they sometimes let their sexual frustrations obscure their vision. I do not mean to downplay the apparent misogyny present in some of the dark corners of their back catalog; even if meant ironically, some songs present an image of sexual relations that are simply crass or unacceptable. 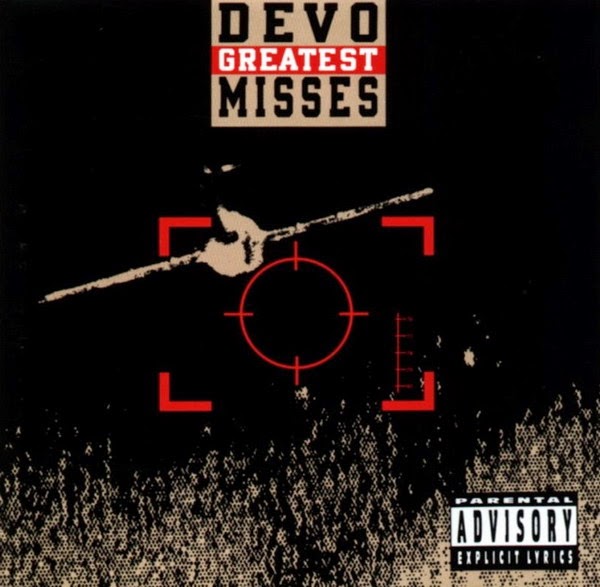 It is for these reasons that I sold everything except Q: Are We Not Men? and started looking for a compilation. The obvious and most widely available choice (in the US) is the Greatest Hits collection, possibly augmented by or substituted with Greatest Misses. However, neither one succinctly and sufficiently comprises their best material, and both feature several weak tracks. Between the two, they contain most of Q: Are We Not Men?, which is redundant since the album is still worth owning individually, and most of Duty Now for the Future, which is disappointing, since it's a relatively weak album. A clearly superior choice is Hot Potatoes: The Best of Devo. It does contain several mediocre tracks from Oh No! It's Devo (1982), as well as an atrocious remix of "Whip It", but otherwise, it manages to collect just about every worthwhile track up through New Traditionalists. 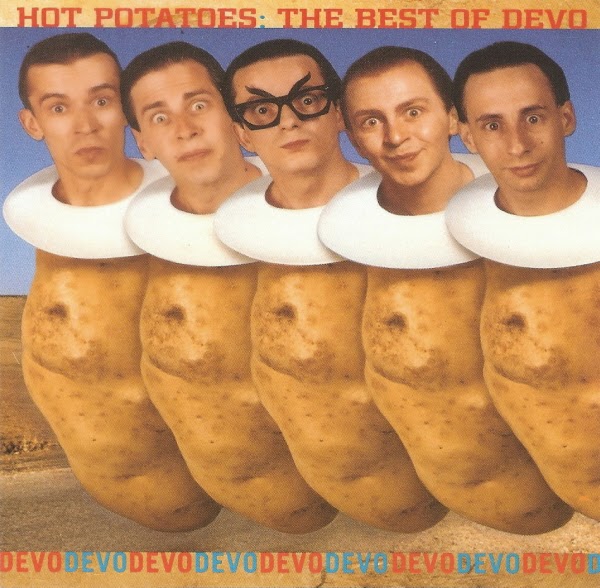 Scores:
Q: Are We Not Men? A: We Are Devo: A
Duty Now for the Future: D+
Freedom of Choice: B
New Traditionalists: C+
Hot Potatoes: The Best of Devo: A-

P.S. Although I wasn't interested in Devo's most recent appearance in Austin, if I had been living in here in 2012, I would have loved to have seen the double-billing of Devo with Blondie!
Posted by Patti at 11:54 PM

Great summary of their career and your response to it! While I only know their big singles, I can relate to both your enthusiasm for the band and your disappointments with their trajectory.

Devo's singles are almost all great. They do have some hidden treasures, but they also have a lot of songs in their catalog that are mediocre or just plain bad, so you probably aren't missing much. Either way, their most overlooked aspect (today) is just that they were an ideas band -- they had so many, and most weren't even musical.

Still more relevant than ever , the band.