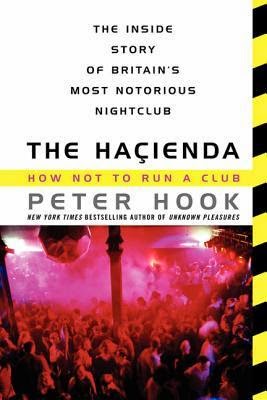 I haven't done a book review in a while. A very long while, actually. But I've recently read several music-themed works and I'm feeling inspired. In the interest of full disclosure, I got this book for free through a promotion from the US publisher. (I was one of the two lucky winners of this contest.) Perhaps the fact that I got it as a promotional tool makes me more inclined to write about it. It is also worth noting that the US edition comes five years after the original UK release and appends a new postscript. I'm not aware of any other changes beyond the cover and the addendum. 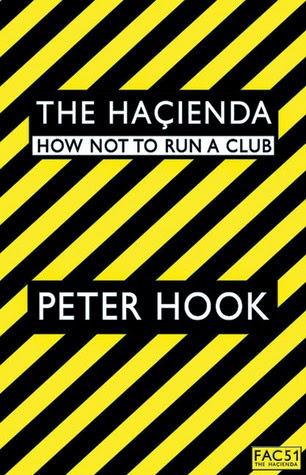 
I'll admit: I probably would not have bought this book on my own. However, I was curious enough to put my name in the contest. While I like Joy Division, New Order, Factory Records, and the idea of a record label opening a venue/club for the obvious crossover appeal, the reality is that the Haçienda was far better known for acid house and rave music, which do not interest me. Oh, and ecstasy, which also doesn't interest me. Since Peter Hook is well-known for being something of a egotist and power-tripper (do some research around here to see what I mean), I wasn't sure how much I wanted to hear about drugs and booze and rock 'n' roll yet again.

But I got the book, so I certainly wasn't going to not read it.

The Haçienda is structured chronologically, with individual years serving as chapters. It begins in 1980 as New Order rises from the ashes of Joy Division while the band and their label (Factory) start thinking about opening a club. It opened in 1982, primarily making a name by hosting indie bands, most of whom were not even affiliated with Factory. The Smiths infamously played some of their first gigs there, and countless other noteworthy bands came and went during the early years. Oddly, New Order performed there rather infrequently. Success eluded the Haçienda until the late 80s, when the DJ nights became increasingly popular. Drug use was rampant, gang activity and violence became increasingly problematic, and the police and local government grew displeased. It closed inauspiciously in 1997 when the licensing came up for renewal and money problems became insurmountable.

Hook spends most of each chapter telling stories about himself and the club, sometimes interesting, sometimes not, and frequently quite indulgent. The worst offenses are a prologue detailing a long night of partying at the Haçienda at its height in 1991 and an interlude detailing a long night of drugs and drunk driving on Ibiza in 1988, while Hook and the rest of New Order were supposed to be recording Technique, an attempted crossover album that hasn't dated well.

However, he also summarizes the activities of the year and provides some perspective on the management and general atmosphere of the place, which is the real root of the narrative. Each chapter also includes an excerpt of the financial accounts of the year, a schedule of the major events (sometimes even with setlists!), and a few notable quotes. The financial records are usually left unexplained, but mostly seem in line with the perpetual joke/myth that the place never turned a profit. Surprisingly, at its height around 1989 and 1990, it appears that the Haçienda may have actually earned money, although it was probably used immediately to pay off debts.

The ancillary material is mildly interesting, but ends up turning about a third of the page count into pure reference material. Considering the considerable thanks heaped upon Claude Flowers (who "got the ball rolling and prompted me to remember a lot of stuff I thought I'd forgotten") and Andrew Holmes (who did "a fantastic job shaping the raw material and bringing it to fruition"), I wonder how much content was actually written by Hook. This isn't helped by Hook's acknowledgment that he began DJing only as a "celebrity DJ" who just picked the records but otherwise did no work and just partied.

That being said, there are certainly some humorous stories and revealing statements. I was bemused at the thought of Einstürzende Neubauten bringing a pneumatic drill into the venue for a show in 1985 and proceeding to attack a central pillar. Seeing the lists of amazing bands that played there proves that the management's taste and reach was impeccable – at least in the beginning, when they were perhaps dangerously ahead of the curve. Hook even dispelled the longstanding joke/myth that every copy of the "Blue Monday" single lost them money. Apparently the first two million copies netted them a loss of ten pence each, but the subsequent runs were simplified to cut costs and thus earn a profit.

The book is not without ironies, though. One is that Hook quotes from Tony Wilson's novelization of 24 Hour Party People, although the movie it was based on is quite famously largely invented. The line between truth and fiction is again blurred as a result, which casts doubt on some of Hook's more exotic tales, like launching fireworks inside the venue for a New Year's party and subsequently setting about five grand on fire.

The greatest irony, though, comes in the epilogue, where Hook states, "Would I run a club again? No. Too much responsibility – plus the wife would kill me." This section is followed by a postscript (written in 2010, after the first UK pressing) in which he describes opening a new club, FAC 251 – The Factory, located in the former Factory label headquarters.

P.S. I realize that providing a score in the C range risks being meaningless or content-free. The point is that if you love Hooky or the Haç to death, you'll love the book; otherwise you won't. So for the average reader, this book ends up being at best average, perhaps boring or even depressing.
Posted by Patti at 1:55 PM