I've been very skeptical of the recent trend of concerts consisting of full album performances. It seems like a blatant nostalgia trip, at risk of providing neither room for the creativity of designing a good setlist nor the freedom of rearranging songs to take advantage of the live setting. This type of show has become very popular among some of my favorite post-punk/new wave bands, and I'm not sure how to feel about it. It clearly is an attempt to give fans what they want, which apparently is just a rehashing of the past, but I see both good and bad in it.

I've also been very skeptical of the antics of Peter Hook as of late. It was only a few months ago that I acquired his first book, The Haçienda, and my review was mildly unfavorable. Hooky has long since seemed like the odd member out of New Order, and there is quite a bit of content available to the public of the feuds between him and the rest of the band. For that matter, there's a fair bit of history of feuds between him and others (cf. Freebass). In fact, he comes off as a bit of a loudmouthed jerk. However, it's hard to really know the truth or to actually establish fault.

At any rate, when I heard that Peter Hook and the Light were coming to town to perform New Order's Low-Life (1985) and Brotherhood (1986), I did not jump at the opportunity. It wasn't until just a few days before, after deciding that I wouldn't be going to the Fun Fun Fun Fest this year, that I realized that $21 was pretty cheap for an aging veteran of two of my favorite bands. Even though the forecast was heavy thunderstorms, the venue claimed to have tents, and I figured it was still worth a shot. 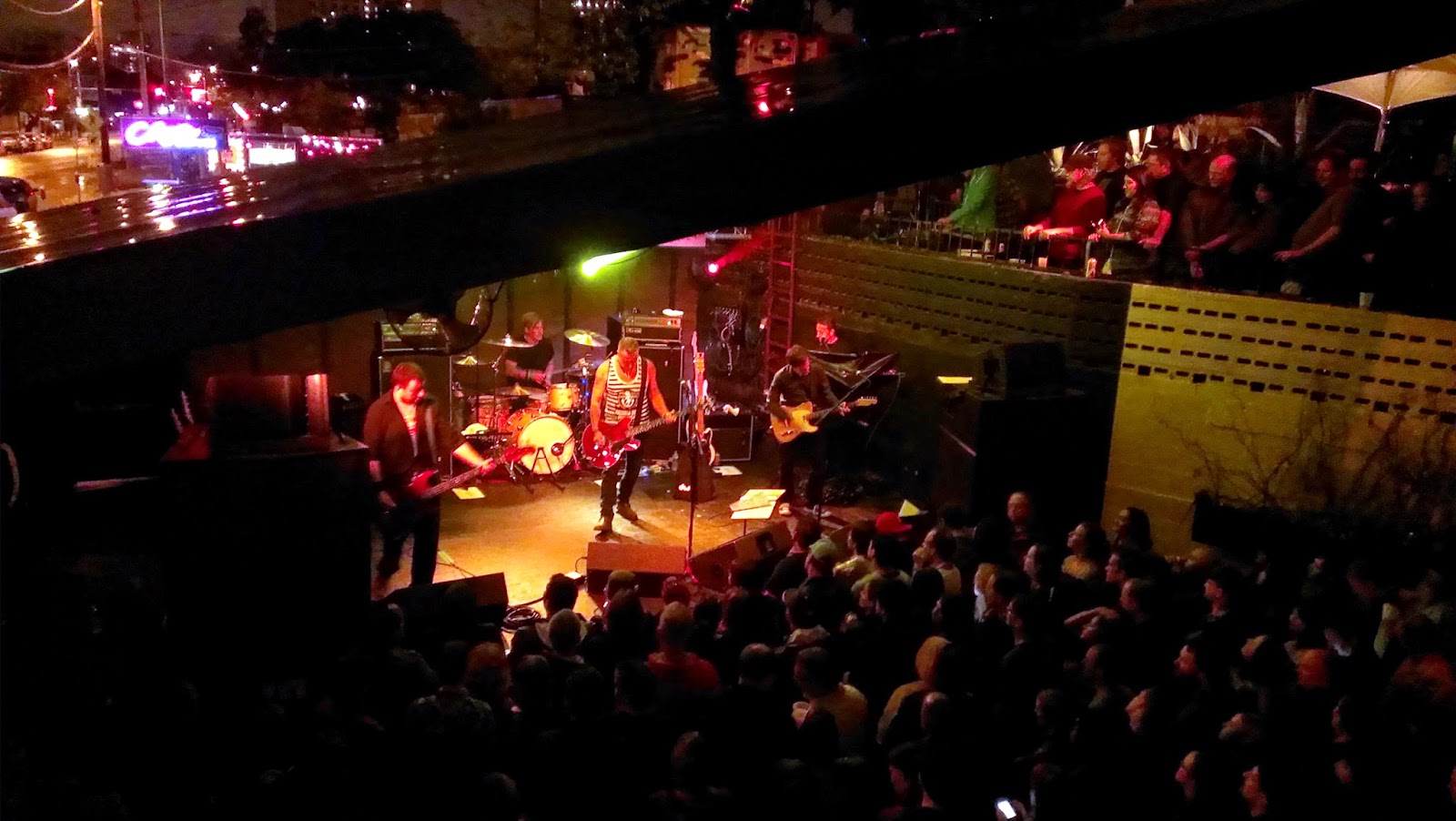 Of course, it did indeed rain during most of the concert, and the best spots were not actually under tents. So I stood in the rain and even took my usual notes, although I now know that was pointless since Hooky posted the setlists online the next morning. This was actually the opening night of the new US tour of these albums, following prior tours featuring the original Joy Division albums and then the first two New Order albums. It was also announced that the band would be their own opener, playing an assortment of Joy Division songs.

Currently, the line-up of the Light features Hooky's son, Jack Bates, on "rhythm" bass, along with three of Hooky's former bandmates from Monaco: guitarist David Potts, drummer Paul Kehoe, and keyboardist Andy Poole. Hooky himself sings and plays "lead" bass. The dual-bassist situation might strike some as odd, but since Peter's last band initially featured three bassists, this is not so extraordinary. Furthermore, considering the prominent role that his bass played in Joy Division and New Order, it's no surprise that many of the songs put both musicians to full use. Of course, in most songs, Hooky let his son handle the basic parts, while he would just occasionally double the parts, play an octave higher, or break for the solos.

Nonetheless, Hooky is still a solid performer, and when he did play, it was with honed precision and skill. On "Love Vigilantes", he even played the melodica riff, and in the bridges of a few songs, he would turn to a drum pad and beat out some extra rhythm parts. And naturally, he took the lead vocals – except on "Sooner Than You Think", where he let Potts take the lead on the verses. Potts also took the co-lead part of the chorus to "Paradise", and sang backing vocals in many songs. The similarity of his voice to that of Bernard Sumner's threw me off, but I'm glad it wasn't relied upon too much. Meanwhile, Hooky can actually do a decent job of approximating Ian Curtis, but these days he sounds quite different than Sumner.

The Joy Division set was a great way to start things off, especially since it started with their best song ("Atmosphere") and continued along with a motley selection of songs scattered throughout their brief career. Most of these songs were played with a punky, energetic vibe befitting the original band's live sound. The real surprise was "ICB", a conspicuous anomaly in that it is a New Order song from their debut album, Movement (1981). It fit right in, but one can only wonder why that song. After all, Hooky did sing lead on two songs from that album – but not that one!

I had assumed that after a brief break, the band would jump right into Low-Life. Instead, the Light (without Peter) came out and played an instrumental version of the rare "Let's Go". Hooky then came out and played both sides of the great 1984 single "Thieves Like Us" / "Lonesome Tonight". I figured that worked as a good chronological prelude to Low-Life, but the band surprised me again by starting into Brotherhood.

I've always slightly preferred Low-Life, and I'm left to assume that by reversing the chronology and playing it last, Hooky shares my feelings, or he figured his audience would. I felt wronged for a second until I realized that it didn't matter at all. Even if I do have an established preference when it comes to the recorded versions, I'd be hard-pressed to say which one was better live. I think the band handled the Brotherhood songs better than I would have expected, but part of it might just be that the album is less sequencer-based and thus translates to the live rock band format more readily.

The band brought a great energy to the show, and I thought the band's familiarity with each other contributed to a certain tightness. The sequencer-heavy songs (i.e. most of the singles and "Elegia") were less dynamic and exciting, but the music was still good. It's just a bit awkward to watch the musicians stand around on stage, waiting for their brief part or even just the next song. Otherwise, it was great to see some of these lesser-known songs played live for the first time since 1987 or thereabout. I also appreciated that several songs were played in their extended forms, closer to the versions found on the original 12" singles. "Bizarre Love Triangle" was definitely longer than the album version; "Subculture" featured a few elements from the 12" mix (although that's a rare case where I prefer the album mix); and "The Perfect Kiss" featured the third verse and extended instrumental section found only on the 12" version, although it probably still wasn't the full nine minutes of the unedited original. (The frog solo was sorely missed, for example.) 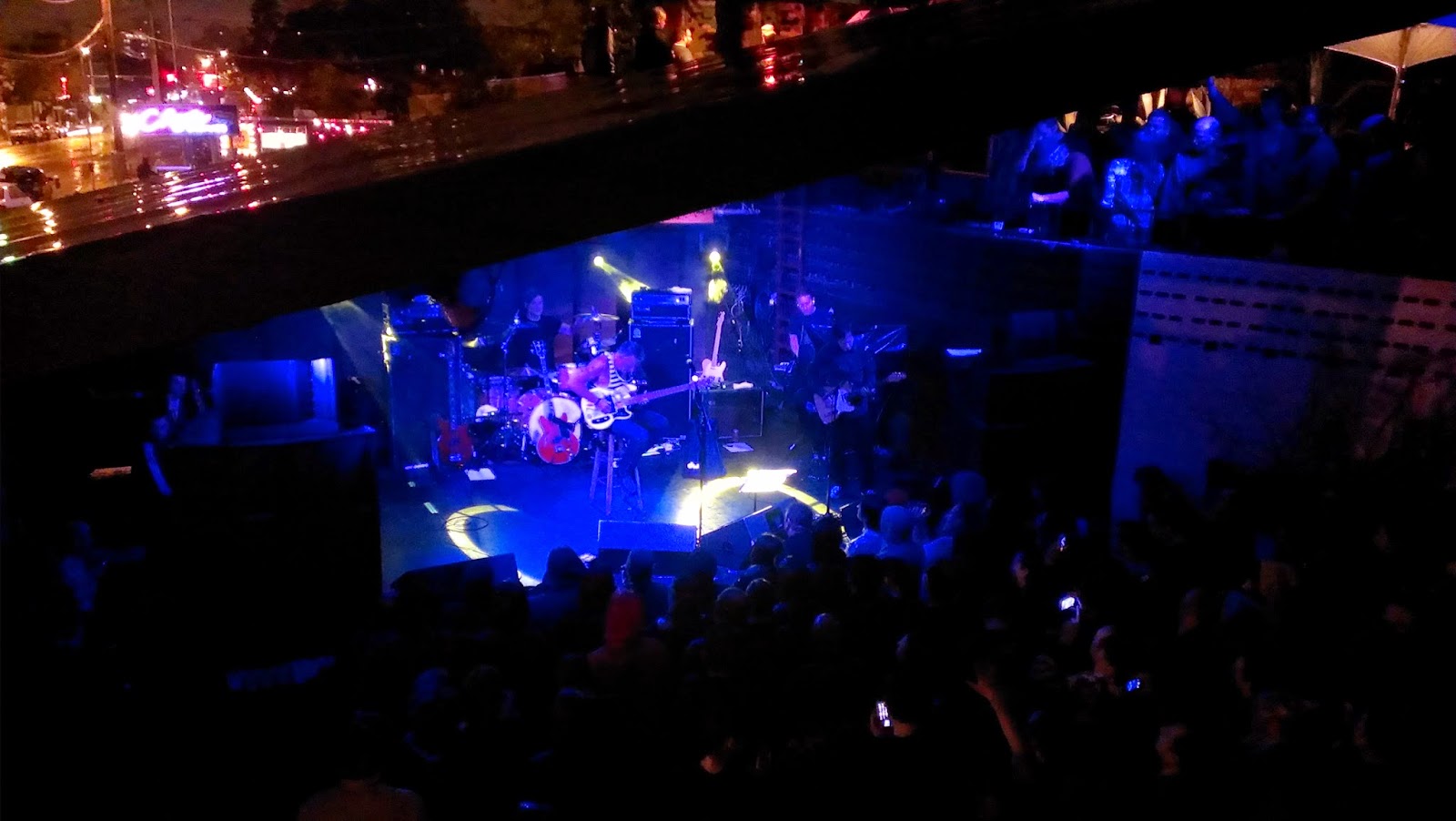 [Hooky on a stool with his six-string bass for "Elegia".]

Hooky's vocals were the one thing that were sometimes a weak point. While he appeared natural trying to convey Curtis's words, he was clearly less comfortable singing some of Sumner's vocals from the New Order set. The main problem was just range: Hooky's voice is much closer to Ian's, so he didn't really have to stretch to sing the Joy Division songs, but Bernard's voice is just a bit higher and softer than what Hooky could reasonably manage. He ended up singing many parts an octave lower, which sometimes worked and sometimes just didn't sound right. There were a few parts that he didn't drop but still couldn't do justice to. Otherwise, while his voice might not be extraordinary, I thought he did a good job with the vocals, and the mix was such that I could understand most of the lyrics quite well.

The encore included several singles from the era (loosely speaking), which naturally received great audience response. "True Faith" and "Temptation" really got the crowd excited, while "State of the Nation" was a bit of a surprise, even to me. (I always thought that one and "Shellshock" were of a lesser quality musically, even if the lyrics to "Nation" have reasonable merit.) The final number was a precursory take of "Love Will Tear Us Apart", which was satisfying despite the predictability.

I'll admit, Peter Hook more than surpassed my expectations. He might not have challenged his audience or provided any new insights, but the entire purpose of his project with The Light has been to bring alive songs of his past, and he certainly does it well. I give him major bonus points for the Joy Division set and especially all the extra singles and rarities. The show rocked, the sound was superb, and he treated his audience quite well, so what else could you want?