I recently re-read Rip It Up and Start Again: Post-Punk 1978-1984 by Simon Reynolds (see full review here) and along the way I stumbled across a few songs that I would like to call out for their special qualities.

First off is the first single by Pete Shelley, "Homosapien", released in 1981 shortly after the breakup of Buzzcocks. With Martin Rushent continuing his role as producer, the two developed a sound not unlike what Rushent would help create with the Human League on their massively successful Dare immediately thereafter. Coming from such a prominent punk band, I imagine that the synthetic sound that Shelley presented with "Homosapien" was a bit of a shock – but the single was nonetheless a modest hit. In addition to the retro-futuristic video, Shelley's lyrics and delivery reveal an unabashed gayness previously left subdued. Naturally, the BBC banned it. Watch the video here or below:


I think Buzzcocks are fine, but I generally find original singer Howard Devoto's second band, Magazine, far more interesting. Buzzcocks experienced their own degree of growth, but the trappings of punk restrained them whereas Magazine expanded tremendously. When I first heard "Homosapien", I was impressed that Shelley too had grown tired with punk's limitations.

Second is "The Devil Lives in My Husband's Body" by Pulsallama, which is probably a prime example of what some might call a "novelty single". The band consisted or a large coterie of women favoring voices, percussion, and a counterprofessional style. The song is apparently one of only two singles ever produced by the band. While the song itself is already a treasure, the video takes it to the next level. It concerns a woman who becomes increasingly worried about her husband's behavior, which appears to be related to Tourette syndrome. Watch it here or below:


Third up is a delightful slice of New Pop from Orange Juice. "Rip It Up" saw the band moving from their earliest incarnation as a slightly awkward but well-intentioned indie band on Postcard Records to a better produced, more commercial, major-label project with a revamped lineup. While much of their material still comes off as quaint, their biggest single (and the namesake of Reynolds' book) is still a charmer. However, the band proved that they hadn't entirely abandoned their indie/post-punk leanings when they appeared on Top of the Pops in 1983 to mime to the song. First of all, Jim Thirlwell of Foetus suddenly shows up to pretend to play the sax solo, but then singer Edwyn Collins just starts colliding with him! Also, don't forget the song's unsubtle references to Buzzcock's "Boredom" – and what is with the dancing women tearing up bits of paper!? See it all here or below:

Lastly, I give you an early example of sampling, featuring none other than a real sound bite of then-president Ronald Reagan (up for re-election at the time) saying, "We begin bombing in five minutes", referring to Russia. It was a joke that was not broadcast and only recorded incidentally, but when it leaked, many considered it to be in poor taste. Among the disenchanted, Jerry Harrison (of Talking Heads) and Bootsy Collins (of Parliament-Funkadelic) hooked up with producer Daniel Lazerus to create "Five Minutes" as a form of protest. To get the song out before election day, they had to rush-release it on an independent label, and for some reason they used the one-off name of Bonzo Goes to Washington for their partnership. Listen here or below:

And as a final bonus, check out this awesome flyer for the first Human League concert in 1978: 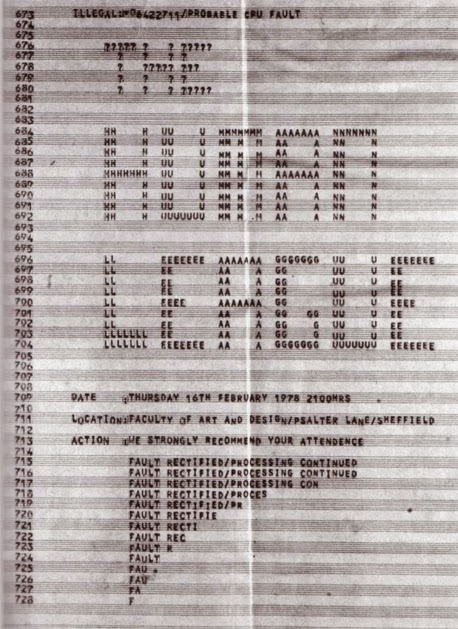 (Originally seen here on Simon Reynolds' Rip It Up and Start Again footnotes blog.)
Posted by Patti at 9:19 PM