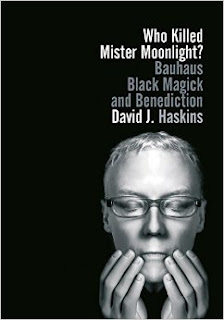 I have what feels like a long history as a fan of David J, which can perhaps be ascertained by perusing some of my reviews of his work dating back to 2007. He was always my favorite member of both Bauhaus and Love & Rockets, and his solo albums, while quite unlike his band efforts, drew me in like I had found some sort of private, forgotten treasure. I appreciated his artistic sensibility and aesthetic; I liked that he was a weirdo, a contrarian, an outsider; and I prized his ability to rock, be it with a blissfully fuzzed out bass or with an unaccompanied electric guitar.

But over the last few years, I've begun to wonder if the paths of our interests have diverged. Reconsidering his debut solo album, Etiquette of Violence, upon its reissue in 2013, I couldn't help but feel like it was less refined than I'd remembered. His first solo album in eight years, Not Long for This World (2011), I found to be overburdened by the weight of its morbid subject matter and arrangements. His latest album, An Eclipse of Ships, is musically superior, but lyrically and stylistically a turn for the worse.

When J announced the publication of a memoir, my curiosity was naturally piqued, although I couldn't resist some skepticism, especially with the current trendiness of alternative rock star memoirs. Furthermore, after both of J's major bands reformed in the last decade, it is well known that both split apart (again) under terms that were less than amicable. Hence, I was concerned that J just had an axe to grind.

In the first section of the book, which covers his youth and the original lifespan of Bauhaus, my fears were allayed. Rock star cliché is mostly avoided, and J actually speaks quite highly of his bandmates as well as other musicians, writers, artists, engineers, and music businesspeople that he encounters. He doesn't shy away from speaking ill of those that deserve it, or for criticizing the failures of those of whom he perhaps expected more, but more often than not, the target of such remarks is himself. He might be a little hard on Peter Murphy, but he contextualizes the situation well, and provides just as much approbation as critique.

At any rate, these character judgments are merely secondary matters to the primary story of the struggles Bauhaus went through to prove themselves, to grow and develop, and to carve out a scene and a name for themselves. He tells many great stories of the era, and provides some welcome insight into some of the band's creative processes. This section was just what I was hoping for: very little obnoxious melodrama, but lots of detail about specific songs, recording sessions, and live performances.

The second section of the book is a rather sudden departure in style and content. J hardly mentions his immediate post-Bauhaus activity with the Jazz Butcher or his various solo albums and singles. (Much of his output isn't even mentioned at all until the discographic appendix!) Nor does he leave much ink on his many years with Love & Rockets, although he does at least cover a few aspects of that band, such as the fire at Rick Rubin's house that destroyed their gear and left Genesis P-Orridge badly wounded.

The primary preoccupation in this section is the occult, i.e. the pursuits of magick (sic). Perhaps if I was interested in such things myself, I might find these descriptions more fascinating, but I was not impressed by J's long tales of messing around with drugs and incantations with Alan Moore. His visit with William Burroughs in Lawrence, Kansas is a little more compelling, but most of his meetings with mystics and famed figures of yore seem a little bit too much like oversharing or just self-indulgent name-dropping. His story of meeting and recording with René Halkett (from the first section of the book) is fascinating, but few of his other similar stories have much of the same poignancy or relevance.

Ultimately, after all his adventures in magickal practice, he suddenly shifts to living in LA, estranged from his wife of 20-some years, and somewhat arbitrarily undergoing two spiritual transformations. However, he hardly provides any sense of closure in these matters. He never follows up with how he gave up on magick nor where his newfound spiritualism took him. In fact, these matters are entirely untouched in the last section of the book.

There is one chapter in the second section about the Bauhaus reunion tour of 1998, and the third and final section is dedicated entirely to the Bauhaus reunion of 2005-2006. However, all of the technical detail, honesty, and pleasant reminiscence of the first section is replaced here by accusation, disappointment, and bitterness. He paints Ash and Murphy in rather unflattering lights and unashamedly blames them for poor performances, a basically unfinished final album, the loss of a promising record contract for said album, and ultimately breaking apart. (He also blames "rampant illegal downloading" for the album's poor sales, which is never a good look.)

While some of the latter-day Bauhaus stories are interesting, and he occasionally has something worthwhile to say about his bandmates (or anything at all about his underappreciated drummer brother Kevin), the last section feels like a set of second-hand rock-n-roll clichés that I was hoping to avoid. Drugs, sex, and ego don't actually always make for a good story. Whereas the first part of the book found J admitting his own weaknesses and admiring the strengths of others, by the end, he seems nearly faultless, while his bandmates make all the bad decisions. It doesn't help that the title of the book, while of course the name of a song he wrote and sang with Bauhaus, also appears to be a blatantly pointed finger at Murphy and Ash.

I can't help but feel like the book lost its focus. The first section is great, but the rest is mostly off the mark. I'm disappointed that J ended up using his memoir as an excuse to vent his grievances of his former working partners at the expense of telling more worthwhile stories of his career. I also found the end rather abrupt, and since it cuts off in mid-2006 yet wasn't published until 2014, one is left wondering what happened to the intervening time. Was there nothing worth telling about the Love & Rockets reunion that came together right as the Bauhaus reunion fell apart? Where did his spiritual quest take him? Why does it feel like the book was written in the heat of anger after the Bauhaus reunion, and he couldn't get a publisher until now?