I first caught wind of Other Lives when I saw them open for Radiohead in 2012. They were one of the best opening acts I've ever seen, and when I bought their then-latest album Tamer Animals, I was not disappointed. Somehow I'd missed that they just put out a new album in May of this year, but I did at least hear about this show.

The first band of the night was Dark Rooms from Dallas, the latest project of guitarist/violinist/vocalist Daniel Hart. His instrumentation and occasional looping (as well as appearance) might give rise to comparisons to Andrew Bird, but the comparison doesn't really hold up past that. In place of Bird's folk and classicism was a darker, denser, percussive style. With the help of a guitarist, a drummer, and a keyboardist/percussionist, they generated a very full and nuanced sound. When they first began, I was concerned by seeing both guitarists playing the same thing for most of the first song. Thankfully, that did not occur again and the show only got better. Hart also contributed occasional samples to the mix, although these were not always very successful. His looping and clever effects on his violin and guitar were consistently great, though, and it was easy to get lost in the haze of this band. 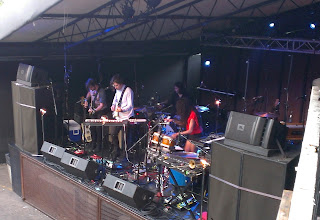 Riothorse Royale is the project of Madi Diaz and Emily Greene, a guitarist and a bassist (although I'm not sure which is which!), both of whom sing on most of their songs. They were joined by drummer Danny Reisch, a notable producer of and contributor to many bands in the Austin scene. Their music was instrumentally simple but used to great effect. The beats were basic, the rhythms uncomplicated, and the guitar and bass parts to the point, but they had a good set of effects, and the vocals were excellent. Just about every song featured both vocalists either in harmony or overlapping their parts. The music had a dark, ethereal, post-punk vibe that was almost reminiscent of Warpaint, but the vocals were what took it to another level. 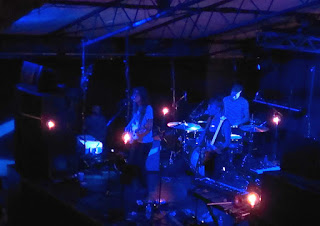 When I last saw Other Lives in 2012, they operated as five-member core with an extra touring musician (who may have been Daniel Hart!). In the meantime, two of their members decamped, leaving the other three to carry on as a trio with guests. On stage, they appeared with two familiar faces: violinist/guitarist/vocalist Hart, who had just played a set as Dark Rooms, and drummer Danny Reisch, who had just done a set with Riothorse Royale. I thought this sharing of members was quite a special treat; it reminded me of when The Cure toured with Siouxsie & the Banshees and Robert Smith served as both frontman of the former and guitarist for the latter. 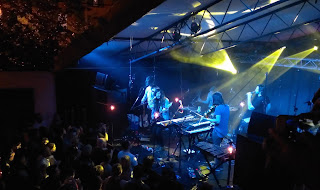 [Other Lives. Note the lightblubs!]

Other Lives have just released a new album, Rituals, which I hadn't heard before the show. (This is why there is an element of guesswork in my setlist.) They split the set in large part between the new album and their last one, Tamer Animals. While the older songs were more familiar to me and thus more immediately enjoyable, I found the newer material right in line, albeit perhaps more diverse and rhythmically complex, which are certainly welcome changes. There were truly no disappointments: the band performed all the best tracks of Tamer Animals (almost the entire thing!) and about half the new album.

Instrumentally, the band is all over the place. They combine rock basics (guitar, bass, drums) with elements of folk, classical, and electronica (violin, trumpet, multiple keyboards, vibraphone, various forms of percussion). Everyone except the drummer were talented multi-instrumentalists; sometimes the members even switched instruments mid-song. Jesse Tabish provided all the lead vocals, but Hart and Josh Onstott also provided many additional vocal parts. In fact, I noticed Hart singing many parts that I would have otherwise thought were keyboards or string parts. Tamer Animals is full of a dense web of instruments and vocals, often difficult to distinguish, but several parts that I had always thought were instrumental were done live with Hart's voice!

Their set was beautiful, melodic, well performed, entrancing, and (to use the word again) ethereal. They have a way of quickly building a song into a unique space and filling it such that when it's over it feels like it was an epic. Most of their songs are actually on the short side, yet they feel long, as if there is more contained in them than there was time for. When the show was over, I couldn't believe only 75 minutes or so had passed – it felt like they'd fit so much more than that in. It's a real skill to be able to make an experience seem like there was even more there than there was. 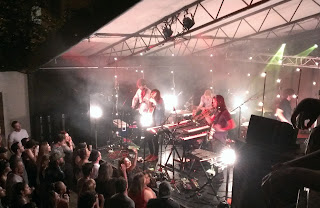 [Other Lives playing their final notes of the night.]

Scores:
Dark Rooms: A-
Riothorse Royale: B
Other Lives: A
Posted by Patti at 2:45 AM