Introduction: I wasn't motivated to make it to Fun Fun Fun Fest last year, but I got excited again this year and picked the day that looked most promising to me. (I had previously attended one day and one night in 2013.) The weather the was cold and windy, and due to storming, the festival was actually about an hour late in opening its doors. It would seem that the first scheduled acts were simply dropped, and the next round were about 15 minutes late.

I arrived just in time for the doors to open (so I had to walk to the end of the line and then walk all the way back to the entrance) and I got in just as Joanna Gruesome were starting. Although the band's name might be a gimmick (not that I particularly care for Joanna Newsom) and their original frontwoman recently left the band, they performed better than I would've expected. I liked the mix of punk energy and post-punk, My Bloody Valentine-style guitar work and melody. I'm led to believe that their words are worth hearing, but sadly, despite many audience requests to boost the vocal levels, I couldn't understand a word. 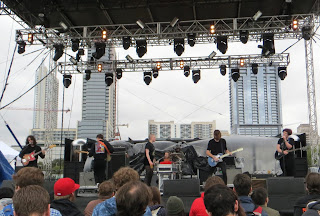 Out of curiosity, I then went to the yellow tent stage to hear Dr. Scott Bolton, a NASA scientist often involved in education and outreach. Unsurprisingly, he was a bit out of place at the festival, but he maintained a consistent crowd (even if most were there to escape the drizzle or hear whoever came next) and he did manage to get a few laughs. His presentation was somewhat disorganized, as if he had a lot of ideas to share but hadn't apportioned his allotted time appropriately. His main focus was the necessity of interaction between the arts and sciences, in that such cross-field engagement is the root of innovation. (I certainly wouldn't disagree.) He encouraged us to make and maintain friendships with a variety of people with different interests and careers. He also talked some about the mission he primarily works on (the Juno spacecraft en route to Jupiter) and the physics of skateboarding.

I caught just the last couple songs of both Shamir and Speedy Ortiz but not really enough of either to get a good impression. Shamir seemed interesting, and I liked his keyboardist, even if the programmed parts were a little annoying. Speedy Ortiz struck me as decent indie guitar rock but that's about all I can say.

With some reservation, I trekked over to the black stage to see the Toronto hardcore band Fucked Up. I must be missing something, because for all the acclaim I hear about this band, I couldn't figure them out. There were three guitarists for apparently no reason. Supposedly their lyrics are good and politically progressive, but I wouldn't know, since every single word was screamed and indecipherable. This was accompanied by a lot of stage diving and the singer running through the crowd for most of the set. On the other hand, this was the first hardcore band I've seen live with a woman member. I eventually got bored and bailed to go catch the latter half of the Charlatans' set. Their rather generic Britpop sound wasn't much of an improvement, but at least it wasn't as abrasive and I was able to find a dry place to sit. I appreciated an occasional hint of funk and the final song's progressive edge.

I stuck around the orange stage for a while at this point. I had a passing interest in Fuzz, and they lived up to expectation as a riff-heavy rock band. They played wildly, a little unhinged, with non-stop energy. They clearly have a lot of fun while maintaining good vibes, even if there isn't much depth to it and the lyrics are throwaway. As expected, the guitar and bass were very fuzzy, but contrary to expectation, the vast majority of the crowd surfing was by women. I don't know if I can take Ty Segall and his gang seriously, but at least they did their best to be entertaining. 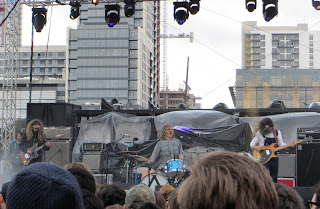 Immediately after Fuzz's set, I witnessed something that perhaps has to be seen to be believed. I'd heard of the taco cannon, but did not realize it was a real thing. Sure enough, the festival organizers have some sort of propulsive mechanism for rapid-firing (sealed) tacos into the audience. They didn't shoot any into the area I was standing in, but I'm betting they weren't vegan, anyway. 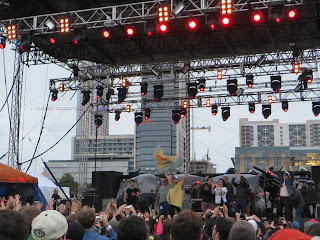 [The taco cannon in action.]

Next up was American Football, one of those 90s Midwestern indie guitar rock bands that disappeared before anyone hardly knew they existed, yet managed to capture a far bit of adoration in the meantime. They played several songs from their lone, self-titled album from 1999 (setlist borrowed from here):

Their music was very chill and low-key, but yet consistently fascinating. The guitar parts were great; they were constantly weaving around each other and finding new spaces to grow. The parts were extremely well written and carefully performed, such that you wouldn't even notice the morass of unusual time signatures if you weren't looking for them. The drummer was on point, too, and in several songs he picked up a trumpet for an instrumental section. The only weak part of the performance was the vocals: I guess I just find Mike Kinsella's style to be a bit off-key or in need of some tunefulness. Excepting that, I thought they did an excellent job, and I was fondly reminded of Hum and Falsetto Boy. 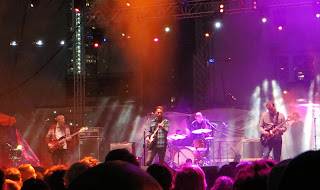 The following act was the real reason I was there: Ride. While I haven't been a fan for long, their first two albums and early EPs have become some of my recent favorites, and I was thrilled at the notion of seeing their reformed live show. Perhaps fully aware of the relative mediocrity of their latter two albums, their set focused almost entirely on the beloved earlier material:

I was thoroughly impressed with their ability to bring the songs alive on stage. The signature two-part vocals harmonies were spot-on throughout the set, and the amazing guitar parts were there in full. I also noticed far more of Steve Queralt's bass and Laurence Colbert's drumming than I ever had from their recordings. Put all together, it was an intense performance and I was easily lost in the beautiful noise they created. I could fault them for predictability or for not introducing many variations in the material they recorded over twenty years ago, but it was of such high quality that even those criticisms seem unwarranted. The one dramatic departure was a long, noisy, experimental jam between the second and third verses of "Drive Blind". I was reminded of the extended "holocaust" section found in My Bloody Valentine's live performances of "You Made Me Realise". As far as I can tell, they've been doing this since their early days, but I was unaware until now. 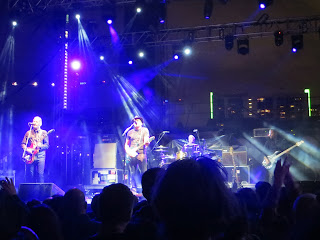 As Ride walked off stage, I rushed to the blue stage to see as much of Grimes' set as possible. However, the crowd was dense and mostly engaging in spaced-out dancing, talking, or lighting up various substances, so I was unable to get anywhere near the stage and my ability to pay close attention was substantially impeded. From what I could see, she just danced around stage while occasionally pausing to interact with various electronics. All I could hear were diffuse drum beats, scattered synth parts, and Grimes' passable vocals. My impressions of Grimes has always been very good in the past, but this live performance made me feel like I was missing something. I could hardly tell what the audience was holding on to. It was a strange experience; it was as if everyone else was hearing or seeing something I couldn't.

When it came time to pick a headliner to see, I wasn't feeling particularly enthused about any of my choices, but I ended up sticking around the orange stage for Jane's Addiction. They commenced playing their Ritual de lo habitual album in full, and during the first song, three scantily-clad women came out and began suggestively dancing. I was surprised at such a tasteless affair, and I left in search of tofu tacos. When I returned, the dancers were gone. In fact, I was lucky to return when I did, as I came back just in time for them to start playing a very distinctive riff that I immediately recognized as "Burning from the Inside" by Bauhaus. Instead of the normal lyrics, it appeared that Perry Farrell was singing parts of Bob Dylan's "Like a Rolling Stone". Truly, this was something bizarre and fascinating. It still hardly makes sense to me, since it certainly never appeared on Ritual de lo habitual, which they were still in the middle of, but apparently they used to play this weird medley back in the day. It was even given a special name: "Bobhaus". 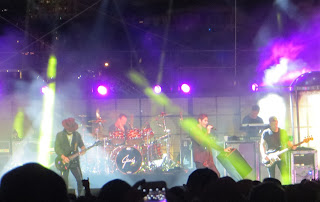 That odd diversion was probably the highlight for me, as soon afterwards the dancers returned to remind us that the five men musicians on stage apparently only have use of women as visual props. At least the band didn't solely rely on their sexist display to entertain their audience; musically, I thought they had some great performances. Certainly some songs were standard macho rock, but many others had a great sense of atmosphere and texture. At the least, Dave Navarro proved himself as an extremely proficient guitarist. The setlist can be found here.

I left early in order to get to the late night show at The Sidewinder, which I will review in my next post.

Scores:
Joanna Gruesome: B+
Fucked Up: D
The Charlatans (UK): C
Fuzz: B
American Football: A-
Ride: A+
Grimes: C
Jane's Addiction: B-

Final Thoughts: I didn't catch enough attention of Shamir or Speedy Oritz to be able to score them effectively. Similarly, Dr. Scott Bolton was far enough outside the usual spectrum that I don't think it would be fair for me to try to score him. Of the acts I did score, it seemed like there was a sharp divide between the acts that I simply couldn't make sense of and those that fell into some sort of rock spectrum that I could appreciate. I fear that my biases are showing through here, but I did my best to try to branch out a bit, and it is entirely plausible that I chose the wrongs moments for doing so.


I had also originally intended to see Desaparecidos, but they unfortunately recently canceled their tour under vague health concerns. I was also very curious about Gogol Bordello, but their time slot competed with Ride and I knew what I had to do. I do wonder if I should have given the blue and black stages more attention, though.

One last sidenote: I think I will perhaps always have an unfair resentment of The Charlatans for forever getting my hopes up when searching for Chameleons records. Their bins were always next to each other, both are usually marketed in the USA with an appended "UK" tag, and both have lead singers with the surname Burgess. Naturally, The Chameleons are far superior, but most record stores seemed to have more used Charlatans albums in their stock.
Posted by Patti at 4:23 AM

Thanks for these reviews about Fun Fest 2015. This fest was outstanding!! I also attended such an outstanding fest at my neighbourhood Los Angeles venues. Anyway, I love all these fest details on this blog! Keep sharing such interesting posts!