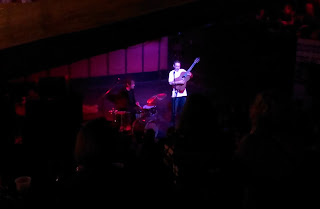 Jonathan Richman is an idiosyncratic person, so it should be no surprise that he doesn't play with a band anymore. Nonetheless, he is lucky to have found a drummer willing to follow his unusual track through music for twenty years. It would seem that his unusual style of performance and songwriting contributed to dissolution of several different varieties of his original group, The Modern Lovers, as well as their difficulties in recording and releasing their work. But ever since he let go of that moniker, he's managed to release occasional albums according to his own spirit. Those expecting the driving rock 'n' roll rhythm of "Roadrunner" might be let down, but those willing to give this guy a chance are in for something special.

It's not like Richman has given up on rock music. He seems to just find most of it too loud and distracting for his ability to express himself. I suspect he thinks it is limiting or full of expectations he doesn't see the point of. He welcomes Latin rhythms and hasn't forgotten the sound of music before the 60s, even if his lyrics bear little resemblance to early rock 'n' roll. His performance is like hearing him tell stories, but he plays guitar for most of it, dances for part of it, and manages to sing on key throughout. It's hard to tell how well rehearsed his songs are, as he frequently sets down his guitar to talk about the themes of his songs, dance, pick up a percussion instrument, or translate the lyrics of Spanish-language songs. Usually, Larkins wouldn't miss a beat and would follow Richman like he knew exactly where he was going, but there were a few times that I could tell the former mispredicted the latter's direction – but only for a single beat.

Richman also has no use for the artificial distinction between performer and audience, nor the pretension of hawking himself as a celebrity. As if the free-flowing nature of the songs and narratives wasn't enough, he frequently would just dance to Larkin's beat as if everyone should be doing it. It was completely unselfconscious. He was just having a good time and trying to make sure we were, too. If someone started clapping in time, he would joyfully call out to them to give him a beat. He ran around the stage at will, as if he had simply forgotten that his guitar wasn't plugged in and he had to sing into a mic to be amplified.

Jonathan's casual and semi-continuous narrative style meant that it was difficult to determine when one song had ended and another had begun. If the themes were related and the rhythms weren't too dissimilar, the songs would just blend together, often only explicitly discernible by a change in key. Some songs seemed at least partially improvised, and most of the songs seemed to feature lyrical variations from recorded versions. In particular, the one song he played from the Modern Lovers album, "Old World", bore very little resemblance to the original version. He recorded a new interpretation for Because Her Beauty Is Raw and Wild in 2008, but this rendition was different from even that. While acknowledging that the old world may have a certain elegance, and it is easy to think of it as a better time, he reminded us of the brutality of earlier times as well as the fact that women couldn't vote in the 19th century.

Richman's humor and earnest attitude to the world around him made the show highly entertaining. I found myself unexpectedly laughing while admiring his simple wisdom. His charm is immediate: when explaining that he doesn't like using "typewriters with screens" and prefers just going "to the plaza" to find out what's going on in town, he made sure to specify that he doesn't mind at all if we do. It's just not what he's interested in; he just wants to talk with people. Apparently, this is no exaggeration. He supposedly does not own a computer, nor use the internet, but he admitted he will sometimes humor people by letting them show him things on their pocket-sized screens.

This simple and straightforward technological approach also meant that this was the first show I'd been to in a very long time for which I did not require the use of my earplugs. This was a welcome change for me, even if perhaps to be expected from an acoustic guitarist accompanied by a drummer that only used three mics. Unfortunately, when another band started playing loud rock music on the inside stage of the venue, they were audible from the outside and sometimes even overpowered Richman and Larkins.

After an hour or so, Richman indicated that he was at the end of the set, but he didn't want to leave. He started up a brief song in which he would sing a line and have the audience repeat the phrase "let me do this right" to a particular melody. After that, he still seemed hesitant, and started singing parts of the Italian song "Nel blu dipinto di blu", popularized by Dean Martin under the name "Volare". He explained that the bland English lyrics were totally different than the original, superior Italian lyrics. After giving that a whirl, he finally walked off stage. Eventually, he returned for one more, but he seemed surprised to be playing an encore, like he didn't take it for granted that he should come back out.

Despite no opener and a relatively short performance, I felt like Richman did a great job filling up the time he shared with us. Near the end, some songs started to drag and feel a bit samey (even with his legitimately skilled acoustic guitar soloing, there's only so much two instrumentalists can do), but he was so effortlessly endearing that it's hard for me to want to focus on the duller moments. There were so many hilarious and personable parts that the cheap price of admission was well worth it.