Apparently there is a tradition in Austin of booking a ton of local bands for free shows during the first week of January, as this week is typically one of the worst attended for concerts around the country. Somehow I'd failed to catch wind of this in previous years, but I was well aware of it this time, and I decided to make it to at least one of these shows despite a busy week and minimal willingness to actually get out of the house. (Apparently I too am guilty of reclusiveness at this time of year, probably due to something about the January cold and recovery from holiday excesses.) I ended up just going to this one event, but there were solid lineups at venues all over town all week long. The one I chose was sponsored by the consistently on-the-mark people at Levitation, which is perhaps why this lineup leaned so heavily psychedelic.

I spent most of the night at the outside stage, despite the relatively cold temperatures (about 40°F, which I'm well aware is not that cold by the Midwestern standards I was raised by). First on the bill was Moving Panoramas, who I'd recently seen at a Fun Fun Fun Fest aftershow. Their dreamy, spacey, consistent groove was still their core and it was still pleasing to hear, but they played at a distinctly superior level. The drummer seemed more confident and steady. The bassist really held down the grooves, and her harmony vocals were much more distinct and perfectly in tune. They may have simply gotten a better mix than at that previous show, but it felt like their whole sound just came together better. They might not have any big variations or unexpected twists, but their increased confidence and comfort made their tunes all the better. 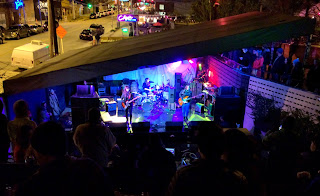 Next up was Christian Bland & the Revelators, whose frontperson is best known as the guitarist of The Black Angels. I'd heard enough about this band to be curious, but I was getting disheartened by their frustrations to get the mix right while soundchecking. When they finally got going, it was immediately clear that the star of their show was their drummer, Bob Mustachio. He was incredibly active, but he always played just the right thing. His driving force brought most of the energy to the songs. Most of the songs lived in a very old-school psychedelic rock space, like they could have been made by a stoner psych band in 1968. The deliberately retro keyboard, heavy reverb, and fuzzed-out haze all spoke to a bygone era, for better or worse. This was reinforced by a straightforward but solid take on Pink Floyd's "Lucifer Sam" (although they confusingly ended with a cover of Buddy Holly's "Peggy Sue", which has never been a favorite of mine).

Christian Bland himself had a good guitar sound, but his voice was heavily effected for the entire set, including when he was just chatting to the audience, so he was rendered entirely incomprehensible. I could forgive that, but unfortunately there was an even weaker link: the keyboard. Either the instrument was simply out of tune or the keyboardist was just playing poorly. In any case, it didn't help that the volume level of the instrument varied greatly from note to note such that it was often inaudible and then suddenly way too loud. 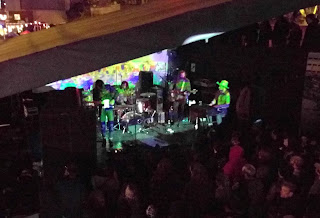 I took a break inside to warm up and see Hidden Ritual. They had a sort of dark, hazy post-punk vibe. The singer wore sunglasses and mumbled sparsely into his microphone in a manner that was not particularly enthralling. However, I was reasonably impressed by the bassist, as he seemed to be driving most of the harmonic and rhythmic qualities of the band. His sound was thick, punchy, and insistent. The rest of the band seemed a bit cold and thin in comparison. The drummer was apparently unmiked and nearly inaudible, and despite having the bass drum lifted off the ground like another tom, his style seemed constrained and unsophisticated. The keyboardist seemed particularly odd and spent most of his time hunched over his instrument, engaged in a ritual that did not seem to produce much actual sound. They reminded me of the early, goth-minimalist style of early Cure albums, but sadly without a comparable standard of songwriting. 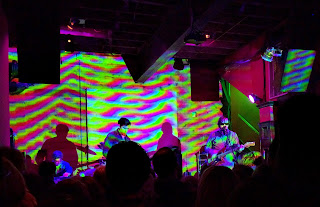 Although I was excited to see Ringo Deathstarr last year at Levitation, I ended up feeling like they weren't quite what I was expecting. This time, they stayed a bit more in line with the classic shoegaze sound of their studio recordings. However, they again exhibited a heavy side that isn't entirely documented on record – their thick, swirling energy often burst into an intense rock passage with blazing, wild guitar solos. Their whole set was very active and fun to watch. I liked the basslines and appreciated that the bassist got more opportunities to sing, both on her own and alongside the guitarist. 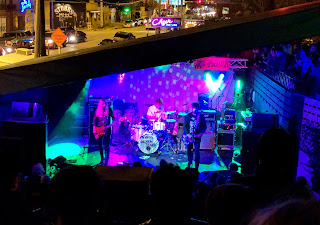 I may have seen Golden Dawn Arkestra twice last year, but they've rapidly become my favorite Austin band. They bring such a strong and unmistakable vibe to their shows that it's hard not to get wrapped up in it. They manage to be incredibly funky, very danceable, thoroughly psychedelic, and bizarrely mystical, all at once. At this show, I counted thirteen members, and their configuration was different than past concerts I'd seen. There was again a keyboardist/vocalist/saxophonist and a xylophonist/keyboardist/vocalist, but this time five horns players, a bassist, one guitarist, two percussionists, and only two dancers. There was a lot of movement on stage and it did seem like many members switched roles and positions throughout the set. The whole thing has a great upbeat, exuberant tone and I don't know how anyone could resist their grooves. They have a wondrous mix of style and substance. I eagerly await their debut full-length album. 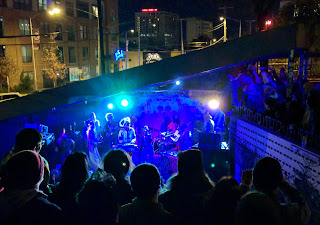