Introduction: I had such a good time at Austin Psych Fest last year, even with the many minor faults, that I couldn't wait for it to come around again this year. Unfortunately, I have been so busy with other activities that I knew I couldn't go all weekend, so I just picked one day. Sunday features the first reunion of the 13th Floor Elevators since their breakup in 1969, which would be an amazing sight to behold, but I went with Friday, primarily for the opportunity to see Tame Impala, whom I missed my chance to see at Austin City Limits in 2013 due to a rainout. Ironically, this week in Austin has seen record-breaking rainstorms, so I knew going into it that it would be rainy and muddy. This was not at all my first experience with rain-drenched outdoor concerts, so I figured I could deal with it. The worst part was just that the festival grounds had to be reconfigured, as the riverside Elevation Amphitheater was not tenable.

Unlike last year, the grounds didn't open until 3pm, with the first band starting at 3:45. I rode my bike downtown during a downpour around 3pm and waited for the shuttle while seeking shelter in a covered doorway. A group of three Australians joined me, and after they quickly grew impatient, I joined them in an Über ride to the venue. (Thanks again, Steve and Caroline!)

I started with Hundred Visions. I was fairly disappointed by their noisy, thrashy punk sound and quickly departed to Willie Thrasher and Linda Saddleback. I wasn't entirely sure what to make of them. Thrasher is an old school Inuit folk musician hailing from Aklavik in the Northwest Territories of Canada. I admired his spirit (and he sung and spoke plenty about spirit!), but his performance was not actually very accomplished. Part of his claim to fame at the moment is the appearance of several of his older songs on the recent Native North America, Vol. 1 compilation. He played "Spirit Child", which he claimed to have forgotten until he heard it again on the collection, but most of his songs followed a similar pattern: rapid, heavy strumming on an acoustic guitar; shouted, nearly strained vocals; a not-so-steady pulse on a bass drum; and vocal and tambourine accompaniment from his partner, Linda Saddleback. I dug his message and ageless energy, but he could benefit from a little variety of style. 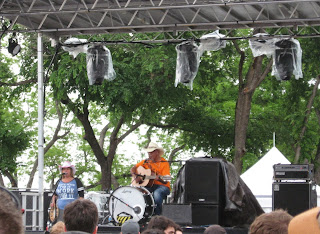 [Willie Thrasher & Linda Saddleback. Note that this is the weather-afflicted relocation of the Elevation Amphitheater.]

Mr. Elevator and the Brain Hotel: I was immediately surprised that the centrally-located figure on stage, the bassist, did not have a mic and did not appear to be a frontperson per se. In fact, it was rather ambiguous who, if anyone, led the band. The two keyboardists on either side of the stage both contributed vocals, as did the drummer. Usually, all three sang together. I was pleasantly surprised at my own confusion as to what was happening on stage, and it was all the better in that the music was great. It was groovy and bright with a deep psych vibe. 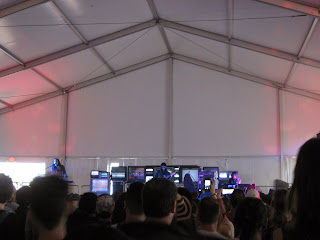 [Mr. Elevator and the Brain Hotel.]

Ringo Deathstarr: I had missed them at SXSW, despite that I was rather excited by them. Their studio output sounds straight of 1990, as if they were still right in the middle of the shoegaze phenomenon. Their sound might be a complete ripoff, but the recordings are just so good that I don't care. On stage, they come off like much less of a My Bloody Valentine soundalike, instead leaning in a heavier, harder direction. Unfortunately, in the absence of the thick psychedelia I was expecting, there wasn't much left. They were missing a lot of what I thought made them special, but they still played a fun set. 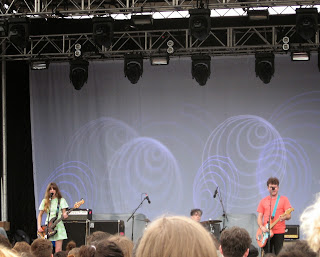 The Holydrug Couple: This late addition to the lineup turned out to be a most welcome bonus. Hailing from Chile, they play a classic psych sound that they have thoroughly mastered. They had great keyboard and guitar sounds and a great groove. The highlight was probably an instrumental featuring the lead vocalist on percussion effects and keyboard. I appreciated their careful integration of various effects into their total sound without letting them overwhelm the instruments and thus come off as gimmicks. They ended with a long, drawn out space jam. 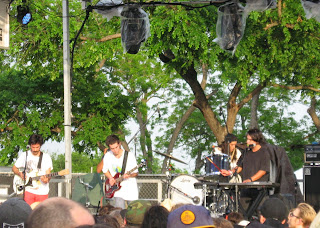 [The Holydrug Couple. This is sadly the last picture I managed to capture!]

Holy Wave: I'd just seen them at SXSW, but enjoyed their droney, stoner groove enough to want to see them again. I like that their vibe is mellow but still full of movement. Their five members really blend in with each other well.

Indian Jewelry: I'm still not sure what to make of this band or their name, but I was encouraged enough by their recordings. Live, they were less ethereal and gauzy than I was expecting, and perhaps a little more dancey and effect-oriented. Instead of coming off like some kind of cousin to Cocteau Twins, they were something of a mess, lost somewhere between electronic dance music, trance, and spacey psychedelia. There was lots of fuzz bass and a dense web of effects. It was bizarre and hard to make sense of.

DIIV: I think I thought this was some sort of dreampop band, and while most of their songs were dreamy or hazy, only occasionally did a pop sensibility emerge. It was more some sort of spaced out rock, but their three guitarists didn't exactly make the most of their instruments and I was left waiting for the music to take me somewhere. After every song, they repeated some variant of the words, "Hello, we're DIIV from New York. This is a new song."

White Fence: Their basic sound might be somewhat derivatively based in 60s garage rock and classic psych, but I loved it all the same. They were a tight band and the music came together well. Several times, they broke free of their chains and let loose into a long space jams.

Spiritualized: I've always admired the Spacemen 3 and Spiritualized, even if I've never followed them closely. My legs were strained and my eyes couldn't take the light show, so I had to sit down, but I could still hear them well. In additional to a full backing band, bandleader Jason Pierce also employed two backing vocalists to add harmonies. The set was very mellow, but very precise. Musically, it was warm and pleasant; it felt like a dream that I was being slowly guided through. It was never jarring or grating or ugly. It also seemed like every single song was about drugs, including the twisted turnaround of "She Kissed Me (It Felt Like a Hit)". "Electricity" and the Spacemen 3 sendup "Walkin' with Jesus" were standouts. The setlist has been posted online:

Tame Impala: I finally got to see them and I was not disappointed! They played most of their amazing Lonerism, a few tracks from Innerspeaker, two new songs to be released on Currents, and a few instrumental jams that have only been played live (and in some but not all cases, released on last year's Live Versions). The grooves were solid, the musicianship was tight and impressive, and they delivered everything I could've wanted. They switched things up on several songs, adding jam sections and extended instrumentals throughout, making it a constant pleasure to try to figure out where they were going next. This was also the live debut of "Eventually". They played for about 80 minutes, and while I would've loved an encore, they wrapped up around 1:45am and I think the festival was supposed to be winding down by then. Here's the setlist (with some help on the details from here and here):

Final Thoughts: Sadly, the story does not end here. Last year, I had some trouble getting on the shuttle back downtown, but this time around was far worse. I'm still not clear on what really happened, but after I got in the line, two buses filled up, departed, and never returned. We were told they were stuck due to mud and traffic, but after the traffic cleared (along with the entire parking lot), they were still nowhere to be found. As taxis and Über rides started diminishing the remaining crowd, we became increasingly anxious as nothing really happened. At one point, a couple hired security staff members even openly mocked us for asking where the buses were. Around 4:30am I finally caught a ride in a taxi with a few other stranded attendees. This issue has been somewhat addressed on the festival website, the Facebook page for the shuttle, and personal email interchange, but it was rather upsetting. I finally got home around 5:30am. (Last year it was about 3:30am, which was bad enough.) Apparently, next year they will be using a different service, and in the meantime they've added extra shuttles.

P.S. Here's where the Elevation Amphitheater was originally supposed to be: 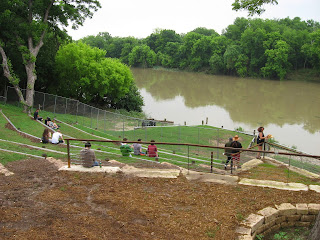