Having just seen Beach House the night prior, I was on the fence about seeing two shows on two consecutive work nights. However, I'd heard great things, so I took a chance and went for it.

First up was Angus Tarnawsky, an Australian musician that appeared solo with an electronic rig. I was initially a bit skeptical, as I wasn't particularly interested in seeing some techno or rave act. However, I was encouraged by the presence of some percussion instruments scattered about his setup. In fact, his music was a bit more detailed and nuanced than I would've imagined. It was certainly a form of electronica, and it was usually danceable, but the focus was less on maintaining a steady, basic dance beat and more on establishing a dark, twisting, exploratory atmosphere. It wasn't harsh, but it was a bit heavy. Tarnawsky's percussion breaks helped keep things interesting; after he got a good loop going, he'd often step over to a snare or cymbal and add rhythmic elements. The snare was unfortunately hardly audible, but the cymbal was better, and in one track he picked up some sort of heavy-looking, metallic bell and got a nice, ringing tone from that. Another piece was announced as an improvisation, and while it started slow and aimless, he eventually found a groove and managed to take it somewhere. It didn't seem like he played for long, and it was a bit easy to get distracted, but I ended up enjoying his efforts more than I thought I would. 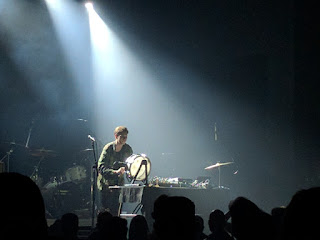 When Savages came out, I could tell this wouldn't be your standard rock show. Much like with Beach House the night before, it was immediately apparent that the lighting was going to be something special. I was reminded of Bauhaus and their insistence that their lighting should be theatrical and stark, not glamorous and generic. Savages relied solely on fixed sources of bright white light and reveled in the shadows. Emo's is basically just a bare-bones warehouse with a sound system, but the band made it feel like it was theirs from the beginning.

The post-punk label and early 80s goth rock comparisons are probably fairly tired by now, but I still can't help the feeling that the style of the band is indebted to the early albums of bands like Siouxsie & the Banshees, The Cure, and Joy Division. The single, angular guitar, the toms-heavy drumming, and the steady, heavy, prominent basslines are all distinctive post-punk hallmarks. The difference is that Savages focus on the aggressive, propulsive, and decidedly more "punk" side of post-punk. While the aforementioned bands all started out very punky and settled into something sparser, grander, and more elaborate, Savages seem to work from the other way around. They want the complexity and expressive scope of post-punk trappings, but they don't want to sacrifice any of the raw energy of punk, either.

I'm afraid I don't know the songs well enough to provide a setlist, but I know that recent setlists in Dallas and St. Louis look similar to what I saw. The band started out with full force and didn't slow down for a solid hour. The intensity was impressive and enrapturing, but it was also slightly tiring. There was no reprieve for a long sprint. Nonetheless, the energy Savages produced felt like a positive force, even if there was a large degree of aggression and anger. Near the end of the set, they finally took it down a few notches and left some room to breathe. They placed a few sparser, gloomy, brooding songs, including the almost-title track of the new album, "Adore". The pace picked back up for one final heavy song, the non-album single from 2014, "Fuckers" (as in, "Don't let the fuckers get you down!").

Even if the pacing of songs was a bit imbalanced, the four members of the band managed to share the space of their sound quite well. They each had something interesting to offer throughout the set. Ayse Hassan's bass was huge and carried the weight of the songs. (I even saw her use an ebow on her bass for one of the later songs!) Fay Milton drove the songs forward with her solid drumming. The guitar of Gemma Thompson was constantly spiraling around the other instruments. And of course, Jehnny Beth's dynamic vocals were in their prime. She showed no hesitation to give all that she could; she dove into the stage and crowdsurfed several times, and at one point even stood up in the crowd, supported only by the audience members underneath her. 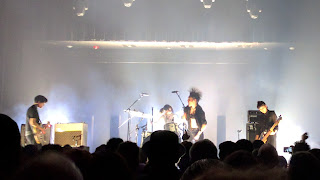 [Savages. I happened to catch Beth's hair in a rare moment of disarray.]

Savages' intensity might be a bit overwhelming, but it is powerful music with good lyrics. They draw on many great bands for inspiration (as most bands do!), but they take the raw elements and form them into something that feels legitimately new and exciting. They've also proven that they can grow and mature quickly, which makes me all the more curious to see where they will end up in the next few years. Even if they just kept playing shows like this, they'd still be impressive.

Scores:
Angus Tarnawsky: B
Savages: A-


[Edit 2016.04.16: I was able to find the setlist here. And one other thing I forgot: between several songs, Beth speak-sung some of her lyrics in a manner that reminded me a bit of Jonathan Richman. It helped cover time when the others were tuning or adjusting and also added an unusual, dramatic touch. I liked it. Anyway, here's the setlist:]