I'd been aware of the Melodica Festival for a while and finally now had a chance to experience it firsthand. It was also my first time at Klunkerkranich, the chosen venue for this year's Berlin edition. I was immediately intrigued by the directions that instructed me to go to a shopping mall, find a specific elevator, and take it to the top of the parking garage. It turns out that the place is a rooftop bar with a fantastic view of Berlin. Part of it is covered and forms something like a café, and inside is the stage.

First was Oh Lonesome Me, a singer-songwriter trio from Berlin. The guitar and keyboard interplay was pleasant, but the real draw was the dynamic harmonies of the two women vocalists. The drummer occasionally offered some backing vocals as well, but he held his own with his kit, which helped keep the songs moving. 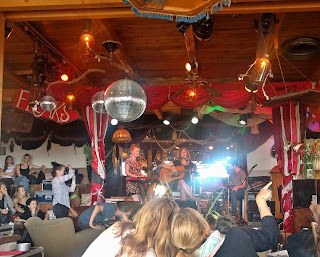 Next was Lisa Kudoke, a solo guitarist/vocalist also from Berlin. I liked her fingerpicking style, but the tone was too bass-heavy and got lost in the noise from the crowd. There might have been something entrancing in her songs, but without any flourishes, the performance came across too monotonous.

Third came Next Stop: Horizon, a bit of a break from the expected folk and singer/songwriter genre. The Swedish trio delivered upbeat, dancable electro-pop with a few slower, sparser songs as well. They expanded their guitar/bass/keyboard instrumentation with a drum machine, programming, vocoders, and a lot of effects. They sounded polished, confident, and oddly convincing.

Ida Wenøe from Denmark initially appeared solo with just her acoustic guitar, but after just a few songs brought out Ian Fisher to provide harmonies, guitar, and banjo. Another song also featured her roommate Espen on vocals. The added interplay embellished the songs quite fortuitously, even though the stage was becoming increasingly harder to see and hear. 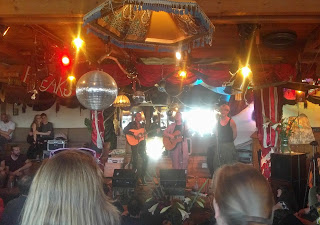 Tom Klose from Hamburg came next. Although his bluesy, percussive style had some promise, it became so loud and difficult to see that I couldn't understand his words and could barely even discern the music. Eventually I gave up and decided to just enjoy being on the rooftop with a nice view.

Oddly, it was entirely impossible to see the stage from almost anywhere on the rooftop except in the covered section, and although there were speakers outside to spread the music, they were rendered practically inaudible from the crowd. Hence, my willpower was overcome and I entirely missed the performance from Jonathan Kluth.

The Klunkerkranich is a really cool venue, but not quite ideal for an intimate singer-songwriter performance. The Melodica Festival is similarly a great idea, and being able to see a bunch of good musicians for 5€ is certainly a bargain, but the choice of venue this year might not have been very well suited to the goal. I enjoyed what I saw, but I wish I could have taken it in with less distraction.
Posted by Patti at 10:19 PM