Just over ten years ago, I wrote my second-ever record review about Patti Smith's then-new album, Twelve (2007). It's a terrible review, and I was clearly still learning the ropes, but it does prove my passion for a unique artist. Since then, I've bought all of Smith's albums and enjoyed them all in greater or lesser capacities, even if, just as I feared in that mess of a review, none of them match the power and perfection of her debut, Horses (1975). I've anticipated seeing her live since way back then, and since her health is apparently gradually declining, I consider myself lucky that I got the chance.

Setlist:
01. Wing
02. Dancing Barefoot
03. Happy Birthday [Patty and Mildred Hill cover]
04. Ghost Dance
05. My Blakean Year
06. Mothers of the Disappeared [U2 cover]
07. Tarkovsky (The Second Stop Is Jupiter) [Sun Ra adaptation]
08. Beneath the Southern Cross / Within You Without You [The Beatles cover tease]
09. A Day in the Life [The Beatles cover]
10. Peaceable Kingdom / People Have the Power [first verse]
11. Summer Cannibals
12. Because the Night
13. Gloria: In Excelsis Deo/Gloria [Them adaptation] 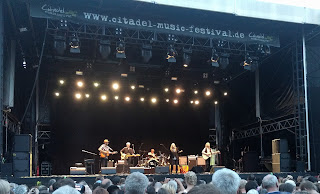 The show took place in a 16th-century Renaissance fortress that required traversing a moat, so as soon as I entered I knew this would be a special show. As I walked to the stage, I realized that Lenny Kaye was DJing 7" records from the same stock as his Nuggets compilations. He left the stage right at the scheduled start of the show, 7pm, but was merely replaced by house music. For the next hour, every time a song began to fade, the audience started to cheer. The later it got, the louder the audience voiced their impatience. It wasn't until after 8:15 that Patti Smith and her band finally walked out.

They started with "Wing", which set the mood for the evening. The slow, contemplative, lyrical song presaged a set full of mystical, meandering readings that followed Patti's whims. Although she never got as far as the abstract exploration of "Birdland" or "Radio Ethiopia", she seemed to prefer the slower and weightier side of her catalog over the sheer, raw power of songs like "Till Victory" or "Gone Again". This fit with the general aesthetic of her last album, Banga (2012), although she only performed a single track from it ("Tarkovsky").

The second song of the night was nonetheless one of her most upbeat songs, the classic "Dancing Barefoot". While it was a pleasure to hear, it seemed to lack some of the strength and energy of the recorded version. It also felt conspicuously slow. Patti then announced that it was Wim Wenders' birthday, so she led a round of "Happy Birthday" in his honor before beginning "Ghost Dance". Although it's a personal favorite of mine in part due to the complex vocal parts, the live arrangement seemed somewhat simpler. Nonetheless, Patti still made it feel alive. "My Blakean Year" and "Tarkovsky" both approached a transcendental state, and while I would've rather heard another original than a U2 cover, I appreciated the subject matter of "Mothers of the Disappeared", and Patti shaped it well.

"Beneath the Southern Cross" was given an extended reading with a lengthy guitar solo from Patti's son Jackson Smith. He topped it off by joining with bassist Tony Shanahan in interpolating the melody of George Harrison's "Within You Without You". After that song, Patti departed and left the band on their own for another Beatles tribute: "A Day in the Life", in which Lenny Kaye sang John Lennon's part and Shanahan sang Paul McCartney's. They were just a bit shaky, but judging by the music stand that Kaye required, their choice seemed decided upon under short notice.

Patti returned for another downtempo groover, "Peaceable Kingdom", at the end of which she began chanting the first verse of "People Have the Power". It was unclear if she was preparing to launch into it with full power, but instead, the band came to a gradual stop before launching into a run of higher-energy songs. "Because the Night" brought out the cameras for seemingly everyone in the crowd, but "Gloria" was the real treasure of the night. Patti still works it like she had something to prove with it, and her blend of classic rock, religious self-determination, and gender non-conformity sounds as relevant today as ever.

The encore started with an explanation: Patti claimed that she originally was no fan of Elvis, but that she'd come to appreciate him, and the following day marked forty years since his death. Thus, the band did a faithful take on "Can't Help Falling in Love" that brought out the classical elements of the song. The nuanced waltz time was quickly overpowered by the fulfillment of a complete version of "People Have the Power", Patti's perpetual rallying cry of hope. It was a fitting conclusion, even if I still wanted more.

Throughout the show, Patti still appeared vibrant and lively, even if there wasn't quite the level of immediacy and strength that she once had. Her music always has the power to capture my attention, but on this night it seemed slower than necessary, and the mix lacked a punch. Only "Gloria" felt truly full and complete; the others were either a touch too loose or were missing something.

Her band, too, was well-honed, but perhaps less adventurous than they once were. Kaye rarely took solos and instead left most of the job to the youngest of the band, Jackson Smith. However, Jackson's style was a bit too conventional and careful for my taste. He is certainly talented, but he played his parts with a finesse and care that seemed inappropriate for the material. I would've gladly seen a little more wild abandon!

At age 70, Patti Smith is still an impressive performer. Her casual style, passionate performance, and earnest discourse make her readily endearing. Her and her band might not be in top form, but they still have most of what counts, and I appreciate that they haven't packed it in or merely offered a predictable set of greatest hits. There wasn't a bad moment in the show, and they had my complete attention for all of it, but if they'd only played "Gloria" and nothing else, I still would've walked away satisfied.