I last saw Tim Neuhaus as part of the Tour of Tours (which also featured Ian). He again played a set of singer-songwriter pop songs, but this time just accompanied by Iris Romen on vocals and Andi Bukelini (I think!) on electric guitar. Tim already has a strong and soothing voice and plays acoustic guitar with power and deftness, but the additional harmonies and guitar tones really filled out the sound. Still, the experimentation and full arrangements of his studio albums was missing, and some of the songs felt like a solid rhythm section would've really made them shine. That said, I liked Andi's subtle but expansive sound, and his leads were usually perfectly suited. Tim has a long history with Ian, and he said that in honor of that, his entire set (minus one song) consisted of songs he'd cowritten with him. That's a pretty cool tribute! 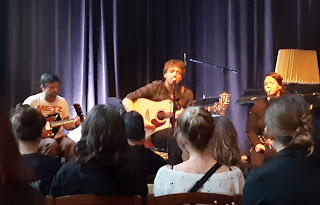 [Tim Neuhaus with Iris and Andi.]

Ian Fisher has been touring Idle Hands (2018) for a while now, and it was only last October that he last played in Berlin. While he again played the entire album (except for "If I Could Buy You"), he thankfully switched up the rest of the setlist significantly. He also played with a somewhat different lineup. Longtime collaborator Ryan Thomas Carpenter was apparently unable to join the tour, so Cornelius Borgolte filled in on keyboards and synthesizer. Bassist Andreas Laudwein and drummer Camillo Jenny returned for the same roles as before. 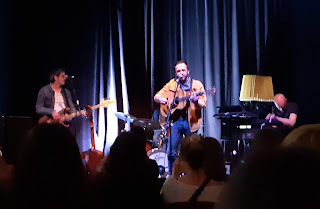 The most exciting part of the set was that Ian played a new song for us. He mentioned being in the studio and recording a new album, but he played it alone with an acoustic guitar. It was a fingerpicked song with a particularly strong folk feel that seemed to grapple with the search for love and/or meaning. I always appreciate when an artist takes a chance and tries out something new: the gamble is usually worth it, and in this case, it absolutely paid off.

The second most exciting part was when Ian brought Tim back on stage to perform a song they'd written together, "Lila", which appears on Tim's recent album Pose I + II (2017). Ian also appeared on the studio version. They played the song unamplified, relying purely on the strength of their voices and acoustic guitars. Iris also drifted on stage just in time to join in for the last part. It was a pretty song and it felt like a special occasion. 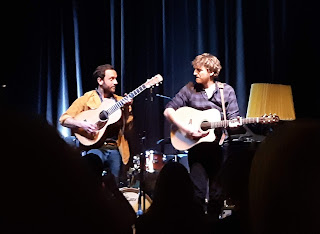 The change in lineup did a lot to change the performance, though: Ryan's mellifluous harmonies were absent, as were his humorous interjections. Andreas still provided some backing vocals, but he generally kept to the background where Ryan would jump in loud and clear. Ian also did most of the talking, which makes sense, but the mood was a bit more serious without Ryan's playfulness. However, Cornelius was an excellent substitute for the keyboard parts. His style was different, and while he might not be as proficient in a traditional sense, he demonstrated great flexibility and created a wide spectrum of sounds, particularly with his synthesizer. His contributions turned the extended end of "Bed Downtown" into an excellent, almost Kosmische jam.

Ian's set was as strong as always and I liked that he was willing to switch things up and try some different things. The new song was a delightful taste of what will presumably be a new album, and the mix of other songs was a pleasure. I would've gladly sat and listened to an even longer set if the venue would've allowed it!

P.S. Thanks to Alyssa, Antoine, Brian, and Jordan!
Posted by Patti at 4:34 PM