The current incarnation of Tangerine Dream features none of the original members, let alone anyone who played with the band in the 20th century or was even born when they made it big in the mid-70s. And yet they still sold out this concert and added a second late show. How do they do it? 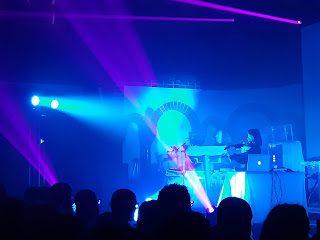 Tangerine Dream today are synthesists/producers Thorsten Quaeschning and Ulrich Schnauss along with violinist and "Ableton Push controller" Hoshiko Yamane. Notably absent is Edgar Froese, the cofounder and only consistent member of the band until his death in 2015. Other notable members such as Christopher Franke, Peter Baumann, Johannes Schmoelling, and Edgar's son Jerome Froese have all gone their own way. However, Quaeschning has been with the band since 2005, Schnauss is an acclaimed artist in his own right, and supposedly Edgar's wishes were for the current formation to carry on and expand the tradition, so they have some clout.

Quaeschning stood surrounded by a wall of keyboards and patch bays, and he appeared to be driving the show from his corner. Schnauss stood off in the opposite corner, mostly attending to his laptop, but he also occasionally manipulated a keyboard, a single rack-mounted unit, and assorted other knob-filled boards. Yamane was front and center but performed as if she was unaware of the crowd. She played violin on about half the songs, although her instrument was not always audible or easily identifiable. She also spent substantial time using her laptop and a few boards.

Interestingly, at this show, an unannounced fourth performer also appeared: Paul Frick. As far as I can tell, he isn't an official member or even a regular touring member, but his contributions to this performance were substantial. He played synthetic percussion and central keyboard parts on every song, and he even had something akin to a piano solo near the end. 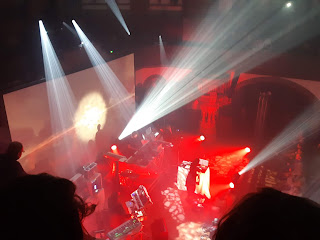 The band played works from across most of their extensive oeuvre, overlooking their earliest experimental and kosmische albums (as expected) and focusing on their trademark sequencer-driven sound from the mid-70s and onward. A few pieces were distinctly more upbeat and bright, presumably from Quantum Key (2015) or other recent albums, and several were darker and more sinister, likely from their soundtrack work. I distinctly recognized "Stratosfear" near the end of their set, which grabbed the audience's attention and served as a highlight of the night.

I was particularly impressed by their willingness to develop and explore their work, including even their canonical classics. They may work with familiar structures and recognizable motifs, but they used them as a framework to expand upon. I'd normally wonder how much of their performance was pre-programmed, but my impression was that most of it was live. The musicians appeared to build off the work of each other, and they occasionally looked to each other for cues. I also wonder what they sound like without Frick, as he added quite a bit to the performance.

Tangerine Dream learned early that as an instrumental band that was mostly stuck behind their massive racks of equipment, a visual element was critical for a convincing performance. Not only that, but they sought out a venue beloved by classical performers and known for its acoustics and intimate vibes. It's hard to say how much the venue really contributed to the sound quality, but the show sounded fantastic. Well, with one exception: I started out the night in the gallery, but I struggled to get a good view and the low end seemed to be oddly absent. Down on the floor, the sound was much better balanced, although the bass was occasionally too loud and the speakers had some trouble producing the intended sound.

In any case, the space was certainly taken advantage of for the light show. It seems likely that the lighting engineer had some time to practice or program specifically for the venue, as the lights frequently lit up parts of the hall and choir in especially dramatic fashions. The projection screen was used mostly for spatial themes and geometric patterns, which was fine, but the lighting was on another level. 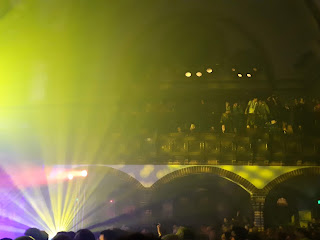 This might be the first time I've seen a band where none of the original or influential "core" members are involved anymore. It seems weird, but the existing members did everything in their power to make it thoroughly enjoyable nonetheless. The music was as solid as ever, the variety of moods and atmospheres was well balanced, the choice of venue was perfect, and the light show was a great match. They won me over.