November 9th marks 30 years since the fall of the Berlin Wall. To celebrate, the city of Berlin has put on a series of events around the city under the name 30 Jahre friedliche Revolution ("30 Years of Peaceful Revolution"), including video projections in important places as well as concerts. I failed to find tickets for either of the Patti Smith shows that were announced, but this concert was free and open to the public. It took place in the southern part of Alexanderplatz, probably the busiest square in Berlin. The fact that it was cold and rainy didn't stop a sizable audience from showing up. Meanwhile, footage from the era was projected onto the buildings surrounding the square.

Zerfall are an original East Berlin hardcore punk band from the mid-80s. They only managed to persist despite constant state intervention by playing in churches, which were one of the only havens for anti-authoritarian activity at the time. They reformed in 2008 with the original singer and drummer, although by now only the singer remains. Their only recording from the 80s is a live show at the Galiläakirche, but after reforming they recorded an album of their old material (25 Jahre, 2009) and then even put together an album of new songs (Ostkreuz in Flammen, 2013).

Musically, the band was a straightforward hardcore punk crew. There was no subtlety and no complexity. The messages were direct and political, as evidenced by the song titles and oft-repeated choruses: "Shop", "Geld regiert die Welt" ("Money Rules the World"), "Geld muß her" ("Need Money"), "Berlin Scheiß Stadt" ("Berlin Shitty City"), and so on. I got a bit tired of the repetition, but near the end, one song featured something akin to a bass solo, and another appeared to be a cover of Abwärts' "Computerstaat" with a longer drum and bass intro and even a sort of lead guitar part. They finished the song by quoting "Wir sind die Türken von morgen" ("We are the Turks of tomorrow") from Fehlfarben's "Militürk". The final song was "Blaue Möwen Lied" ("Blue Seagull Song"), for which the band brought up a bunch of their friends to help them sing it.

Zerfall played for more like 40 minutes instead of the prescribed 30, so Fehlfarben started about 15 minutes late. (I wouldn't have minded except for the rain!) They opened with "Hier und jetzt" and followed it with the rest of Monarchie und Alltag (1980), the same album they played in full when I saw them last year (and when they played Berlin the year before as well). I love that album (I reviewed it twelve years ago and more recently went into greater detail about the song "Militürk"), but the repetition irked me. The two songs they played for the encore were also played at the last show. 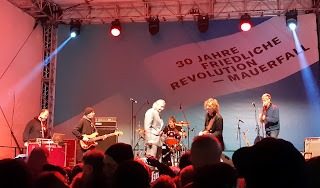 There's not much more to say about the performance than what I wrote last time. It was again a rather conflicted performance. The album is great and still largely relevant, and the current lineup is still able to bring it on stage effectively, but it felt too easy, and the newer songs again didn't quite match the standard of the old ones. However, Peter Hein was a bit more focused and consistent, and against all odds, the mix was actually clearer. (Maybe it helped that I was much closer to the stage.) They again extended "Militürk", but "Ein Jahr" and "Paul ist tot" were played closer to their original studio versions, which may have actually been an improvement.

I'm still amazed that the government put on this concert for free. Both bands were anti-authoritarian and highly critical of the sociopolitical status quo of their times, and it's amusing that the government is now directly sponsoring them. Neither has much of a direct connection to the fall of the Wall, but then again, even the bands that supposedly do (Pink Floyd, David Hasselhoff, David Bowie) merely earned the distinction by playing a concert in front of it. This worked just as well: I appreciated the selection of a politically relevant band from each side of the wall. Hein even commemorated his role with the letters "BRD" taped on his shirt. 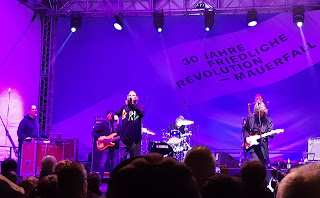 P.S. Coincidentally, I was in Berlin ten years ago for the 20th anniversary of the fall of the Wall and also saw some of the festivities and displays for that celebration. That was one of the trips that inspired me to move here.
Posted by Patti at 8:59 PM