Yes, it was only about seven months ago that I saw Ian Fisher at the same venue, touring for the same album, American Standards, released in 2020 for supporters. This time, though, he was touring with a full band. He claimed this was his last chance to do a proper tour for the album before moving on to new material from a new album that’s apparently already recorded. Again, I was hesitant about Covid risks, but I felt pretty comfortable at Prachtwerk, which is a cozy environment than has never felt crowded or otherwise overwhelming to me.

First was Accidental Bird, the new band of Stefan Honig. He brought with him Martin Hannaford from Honig on lead electric guitar and Harmen Ridderbos of Town of Saints (who has also appeared on Honig and Ian Fisher albums) on keyboards and acoustic guitar, both of whom have also participated in Tour of Tours. Honig played all new songs from an as-yet unreleased album. The songs largely felt familiar to his established style of meditative, comforting singer-songwriter pop. The exception was a song titled “Climate Change”, which he claimed was his punk song. That might be an exaggeration, but it was his most upbeat and jagged affair, and the frustrated lyrics were an earnest plea for action. Ian Fisher came out and joined in on guitar and vocals to accentuate it. Musically, I enjoyed the well-honed backing vocals and the subtly intricate but supportive instrumental parts. 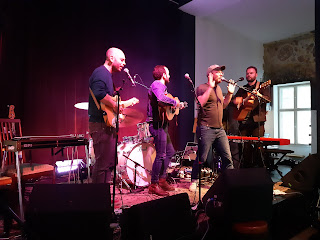 [Accidental Bird with Ian Fisher.]
Ian Fisher came to the stage with a five-piece band, the largest I’ve ever seen back him. I immediately recognized Camillo Jenny on drums from past tours, and I’d heard Richard Case on pedal steel and backing vocals on some of Ian’s past recordings and radio shows. Fairly new to the crew were Emanuel Krimplstätter on lead guitar and backing vocals, Lukas Pamminger on bass, and Danny Rico on keyboards and percussion. Notably absent was Ryan Thomas Carpenter, who was already in the USA for the St. Louis Muny season. Nonetheless, Ian mentioned him a few times throughout the night. They make for quite the musical duo, and when Ian had last toured just as a duo with Ryan last year, it was a different experience. That show featured a number of new songs (mostly versions of songs from his now-defunct Patreon) and a couple covers (one of which has now appeared on his Fanklub). This show focused more on explicitly on American Standards and included most of the album along with about half of his previous, Idle Hands (2018). These are generally all great songs, but I missed the playful risk of all the new songs from the last show. That said, I always appreciate some of his prescient classics like “Candles for Elvis” and “Manmade Mountains”.

On the other hand, with the full band, the newer songs really shone. As Ian has progressed in the complexity and nuance of his recorded arrangements, the songs have increasingly benefited from the skills of a tight band that can reproduce and embellish the material on stage. I don’t think I’ve ever seen Ian play with both a lead guitarist and pedal steel player, to say nothing of a keyboardist as well. Krimplstätter wasn’t flashy, but he wielded a number of delicate solos in just the right places. I appreciated the band’s subtle changes from the recorded versions. And despite my affection for the full sound, I also enjoyed that Ian again took it a step down for a few songs. He performed “Bed Downtown” by himself and then “Candles for Elvis” with just Richard Case on lead guitar. Case moved back to his pedal steel for “Manmade Mountains”, and Camillo Jenny came back out on drums halfway through to really punctuate it. The rest of the band came back for “Regret”, and Stefan Honig came back up to sing along as well.

I’ve never been disappointed by an Ian Fisher show, and this was no exception. I’m looking forward to that new album! 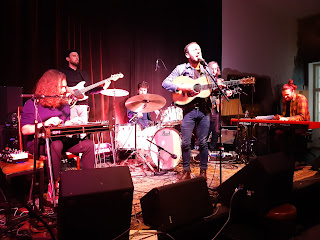 [Ian Fisher with his band.]