Yes, I just saw Neubauten five days before at the Columbiahalle. As with that show, this one was also rescheduled from 2020, although this one was supposed to happen first, at the start of the tour in April. The Columbiahalle show was originally scheduled much later at the end of the tour in September. This show was initially rescheduled for the same timeframe in September, then again to September 2021, and then once more to this date. Thankfully it finally happened! You can read my hesitations around live music during a pandemic in my last review (or anything I’ve written in the last two years), but in any case, I went. I know it’s absurd to see the same band twice in the span of less than a week even during non-apocalyptic times, but I was presented with a bit of a conundrum. The nature of live music these days is accompanied by a constant worry that any show might be canceled at any minute. This literally just happened to Herbert Grönemeyer’s big tour; all three nights in Berlin were canceled because he has covid. So while I was actually more interested in seeing this show (I mean, it’s at the Konzerthaus! It’s a beautiful classical music venue!), I had to hedge my bets. So I went to both. I had tickets to both since 2019 anyway.

The show started off just like the last one. I was worried I was going to be bored by a repeat of the same experience. However, despite that the setlist was the same until the first encore, it gradually became apparent that the band were performing at a higher caliber. I complained quite a bit about the band being loose at the last show and even at the 2017 show I saw, but this time, they were tight on a level I hadn’t seen before. Even “Taschen” was better! The parts fit together just right and the songs flowed with carefully crafted grace. Even the slower songs jelled better; they were just smoother. I still think the samples were too much, and some songs were still a bit too tepid, but this time I could at least follow the intended idea and mood. They felt like they finally had some life in them. I was particularly impressed by “Alles in Allem”, which worked better than ever, even better than the album version. “Tempelhof” also excelled in this environment, and it’s position at the end of the first encore, but not the entire concert, was much better.

The best songs from Alles in Allem and all the classics were just as good as ever. On top of that came a surprise: when introducing the band before “Ten Grand Goldie”, Blixa Bargeld brought out his daughter Millicent to come out and play the trombone part from the record, which she also played on! Amusingly, she wore a blue suit much like Jochen Arbeit’s standard attire. Another surprise was “La Guillotine de Magritte”, a non-album single from 2020, in place of “Sabrina”. I love “Sabrina” but appreciated the variation. The Rampe improvisation was also quite a bit different than the one from the Columbiahalle show. The key lyrics in this one appeared to be “before I go” and “dissolved”. I could see Blixa’s lyric monitor (but not well enough to actually read it), and there were lyrics for it, but the display kept jumping around, so he was almost certainly freestyling. Rudolf Moser seemed to still be figuring out what to do with the song, as he moved around the stage to use just about every set of percussion he could get his hands on. Meanwhile, Alexander Hacke used some really weird effects on his bass to make a bizarrely fuzzed-out squeal. I liked it.

The end of the second encore was “Let’s Do It a Dada”, which was a pure delight with several members of the band using all sorts of weird toy instruments. N.U. Unruh donned a white garment and an absurdly tall hat in an apparent homage to Hugo Ball’s Magical Bishop costume and read Dada poetry, apparently written by Blixa, but obviously inspired by Ball. They’d also played the song successfully at the 2017 show, but this time it really struck me what a great showcase for their strengths the song is! It has some similarities to “Zivilisatorisches Missgeschick”, but where as that song feels random and abrasive, “Dada” is light-hearted, joyful, and full of energy. I also realized that the most driving instrument is simply Hacke’s fuzz bass. He wielded it with so much power and confidence. I want to play bass like that! (For more context on the lyrics and inspiration for the song, I recommend this mostly-English article and this German article.) And after that, the band came back for yet another encore! They just gave us one more song, “Redukt”, which was a great closing pick.

In addition to the tighter performance and slightly better setlist structure, the venue itself made a big difference. The Columbiahalle is a typical large rock venue: no decoration, no comfort, no style, just pure function. The balcony is nice and the sound is fine, but it’s not exactly a pleasant place. The Konzerthaus, on the other hand, is beautiful, ornate, and designed with some level of comfort in mind. And it sounded way better, too! I was particularly surprised since I was sitting behind the band at an angle, and yet I still was treated to superb sound quality. I heard some gripes from other people near me about the view, but I thought it was great. I had an excellent view of the percussion, which is my favorite part of the Neubauten live experience anyway. I could hear every subtle note and beat, including several things I didn’t catch or didn’t understand at previous performances, mostly from little extra touches that Unruh would add on top of the main beat typically supplied by Moser. It was a pleasure to get such a close view of all the weird bits of metal, the assorted springs, the various machinery, and the amusing household found-art objects that the band uses to create the underpinning of their songs. I mean, Moser’s jet turbine percussion solo in “Nagorny Karabach” is just so good! 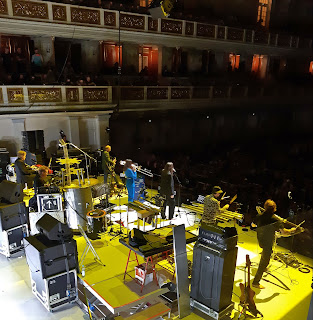 [“Ten Grand Goldie” with Millicent Bargeld on trombone. Also note the large curved spring played by Hacke.]
Perhaps unsurprisingly, I bought the USB stick recording of the show afterwards. It’s still just mp3, but at least this time it’s 320kbps! (The one I got in 2017 was 256.) It sounds great; the only flaws I’ve noticed so far are some distortion in the heaviest parts of “Sonnenbarke” and Blixa’s screeched vocals in “Zivilisatorisches Missgeschick”. It still can’t beat the combined audio-visual experience, and the lack of editing certainly sets it apart from a typical commercial live recording, but considering my comfort with bootleg recordings, I think it stands fairly strong. I’m happy to have it.

Scores:
The concert: A-
The recording: B+