Earlier this year, I received a curious email inquiring about using a photo in one of my reviews for a book. Naturally, I was happy to share it. As I traded emails with Uwe Schütte, I realized that I had seen and photographed the last performance of Psychic TV and Genesis P-Orridge. Of course I had known that P-Orridge died in 2020 just as the pandemic was unfolding, but it hadn’t occurred to me to reexamine their performance history and compare notes.

So, as a result, my picture now graces Godstar: Die fünf Tode des Genesis P-Orridge, released this year via Verlag Andreas Reiffer. I received a complementary copy and it immediately jumped to the front of my reading queue. Schütte had told me that the book is really more of an essay than a biography, and the parenthetical subtitle only found on the inside cover page, which translates to “something of a secret history in pop culture”, alludes to this as well. I wasn’t quite sure what that meant in practice, but it did make me curious. 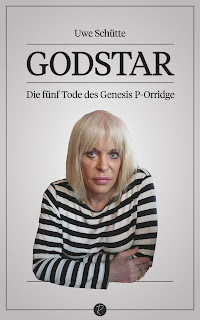 Indeed, the book is a wide-ranging and wandering essay about a broad range of topics, most notably esoteric magic and Brian Jones, the subject of the song “Godstar”. There’s a lot about Aleister Crowley and Satanism, as well as a few sections about the artist Marina Abramović, presumably because of her similar style of shock-tactic performance art. The Pandrogyny Project comes up, as do the antics of COUM Transmissions, Throbbing Gristle, Psychic TV, Thee Temple ov Psychick Youth, and even Coil, Cosey & Carter, and Marc Almond. I could’ve gladly taken even more gender discourse, more about the music itself, and maybe more about what the TOPY really was about, but regardless, few of Schütte’s sidetracks weren’t worth the diversion. They kind of work together to build a picture of Genesis’ environment and interests. There’s plenty of political and general pop-cultural commentary, most of which is sharp. On occasion Schütte might be a little too critical of what doesn’t suit his tastes, but rarely did he fail to make a strong case.

I’m also glad that Schütte didn’t shy away from P-Orridge’s dark sides. He writes plainly of their abusive relationship with Cosey Fanni Tutti and others (and Jones’ and Crowley’s similar behavior), their domineering authoritarianism in their bands and other projects, and their repulsive actions in the name of art. P-Orridge is a complicated person, which makes for excellent material for pop-cultural discourse, but it requires stomaching a lot of rather triggering information.

The legacy of P-Orridge’s “Godstar” project is another one of those things were the truth is hard to find. Schütte presents the book as a sort of continuation of a legacy that Genesis started with a pop song in 1985, continually reworked, and never quite finished. Supposedly they intended to produce a film about the life of Brian Jones, but they never managed due to money troubles. In reality, I suspect that such a film was just such a huge project that they never quite had the focus and perseverance to see it through, and instead they were easily distracted by new ideas and other projects. The closest they ever came to really producing something towards that goal was Godstar: Thee Director’s Cut, a double-disc compilation of songs and remixes mostly originally released in the 1980s on the excellent The Magickal Mystery D Tour EP (1986), the fairly good Allegory and Self (1988), and assorted contemporaneous singles. In truth, it feels more like another instance of “reissue, repackage / re-evaluate the songs / double-pack with a photograph” than any sort of truly newly assembled masterpiece. “Godstar” and a handful of other tracks remain classics, and the rest remains forgettable. 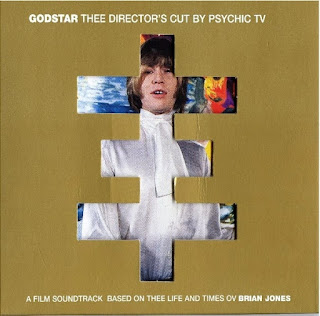 The book ends up being a great alternative reading of pop culture through the lens of subversive, radical art and anti-establishment religious practice. In fact, I learned far more about esotericism than I ever expected to, and I came away feeling like I finally understand a part of society that I regularly run into but never could quite make sense of. It’s probably still not for me, but the concepts of seeking your true self, making your own forms to suit your individual needs, and living outside of the bounds arbitrarily placed upon us by uncaring institutions all resonate strongly with me. I’ve been literally searching for the same things my whole life. 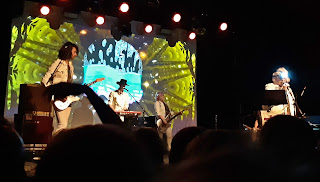 [The only other picture I took at the fateful concert. See the original review for the picture used in the book.]
Posted by Patti at 3:14 PM