I think the attendance of the day's festivities peaked around the time Temples went on stage, or at least that seemed to be the most crowded show I saw all day. It's understandable; I think some of the early arrivers were getting ready to leave, but the latecomers were certainly there by then (the set started at 8:15pm), and the band has been getting a lot of hype. It's not without reason: Temples are a classic psychedelic band, marrying a blues/hard rock core with spacey sounds, lots of effects, and an otherworldly, slightly mystic vibe. (I mean, consider their name!) Live, the spaciness was less apparent and the rock was a little more in focus. They seemed to float between being a Tame Impala rip off and a less melodramatic Led Zeppelin acolyte. I like the style, and the sound is good, but it still seems like it's missing something to make it really special. I watched them soundcheck and caught the singer asking for the vocals to be pushed as loud as possible. They were almost certainly the only band at the festival to make such a request, and it went a long way to make them stand out. Maybe that makes them too conventional, but I appreciated being able to understand the words. 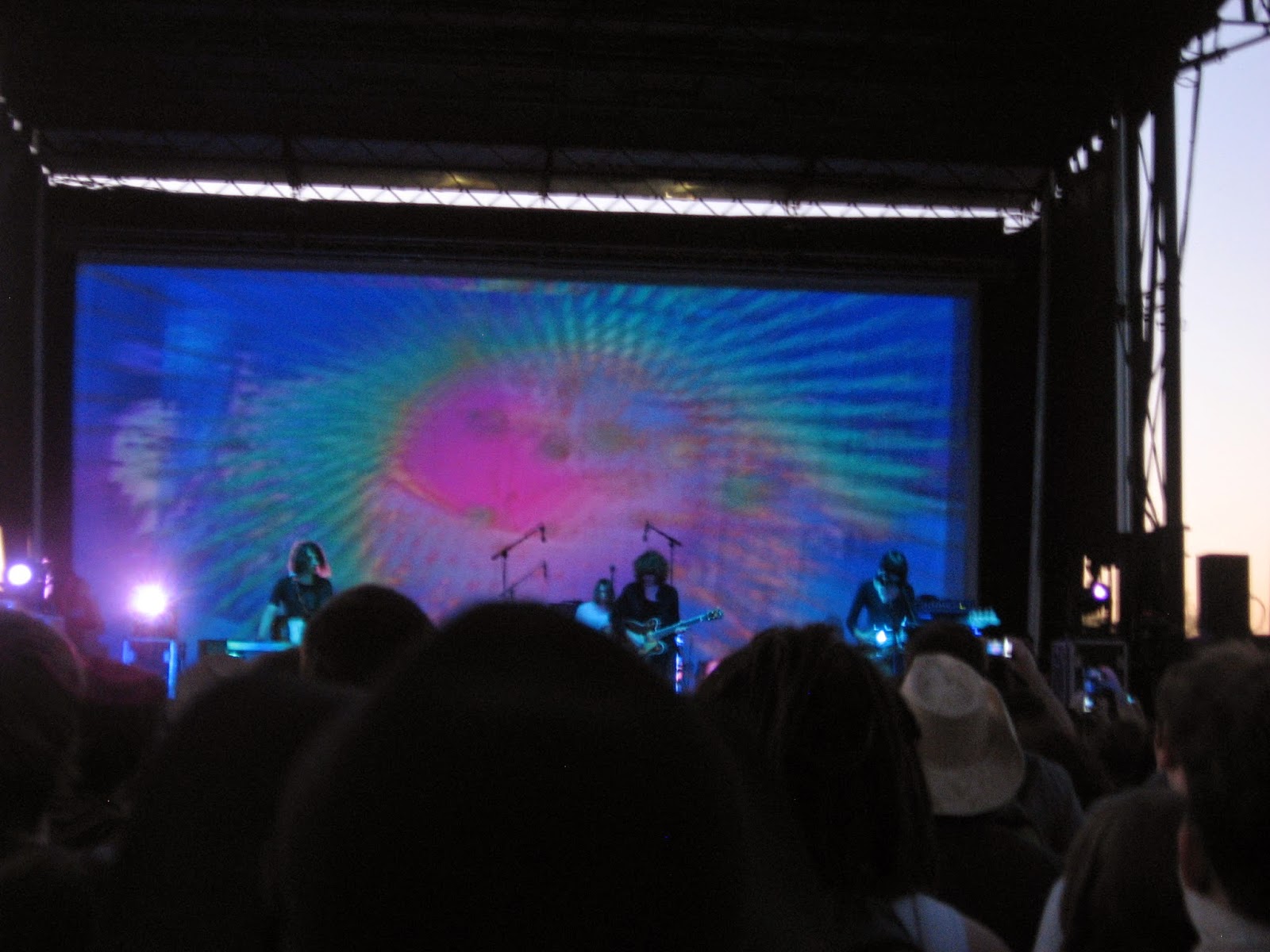 [Temples. My last picture of the night, taken as darkness was falling.]

I then went back to the Levitation Tent to lie down and listen to Mono for a while. They are an instrumental rock band, and I'm absolutely sure I'm far from the first person to make the Godspeed You! Black Emperor comparison. Admittedly, they have very different ideas of what instrumental rock can be, but their guitar tone was very similar (I recently dubbed it "bulldozer guitar" because of the thick, distorted delay effects) and the sense of dynamic rising-and-falling seemed familiar from the GY!BE playbook. It's probably an unfair comparison, but I couldn't help thinking of it while I was listening. The guitarwork was good, but I think their overall sound is just a little too guitar-heavy. Without vocals, I think other instruments, or at least more focus on the bass and drums, might have made things more exciting.

Next up for me was Unknown Mortal Orchestra, whom I'd heard of but never listened to. I gather they have quite a following, and I was initially hesitant to buy in, but I made myself give them a fair chance, and I found myself enjoying it. They performed as a power trio, with the singer/guitarist as the clear central figure. I was expecting to resent his showmanship (ugh, what's the gender-neutral version of that word?), but I actually found his solos quite appealing, and I liked that the drummer fit right in with them and complemented the guitar. Even if the frontperson was the focus, it was clear that the other members had important contributions to make. The sound was a little hard or heavy, but balanced by a pop feel.

Setlist (borrowed completely from here):
1. The Opposite of Afternoon
2. Thought Ballune

I intended to catch some of Acid Mothers Temple at the Elevation Amphitheatre, but the riverbanks were about as full as they could be, so I decided to give Medicine a shot instead. They seemed to be in line with the shoegaze trend, very similar to My Bloody Valentine. It was like a mix of the drone and trance of a song like "Soon" with the darker, thicker mesh of guitars of Isn't Anything. I found the music to be a little too static and invariant. The bass was pleasantly prominent but yet rather simple. The vocals weaved some good harmonies, but they sounded fairly vague and low in the mix.

I left their set early to get a decent spot to see The Horrors. They immediately had a stage presence and atmosphere that seemed right out of the gothy, synthy era of the late 70s and early 80s. Their sound would have fit right in with Gary Numan or some corners of the Siouxsie & the Banshees catalog. I had a nagging feeling that they sounded identical to one of my favorite bands, but I couldn't (and still can't) figure out which one, which probably means they absorbed the influences of some of my old favorites and made something new out of it, which should probably be considered an impressive feat. I liked the post-punk bass and the big, moody synthesizer. The singer seemed a little dark and gloomy, almost to a fault, since I couldn't understand him at all. The guitarist started out the set only contributing a useless mess of noise, but by the end he was playing riffs that fit right in. Despite that particular improvement, I actually thought their set kind of dragged downwards as it went on. I enjoyed it, but couldn't connect with it like I thought I should have. It probably wasn't helping that the lightshow was bothering me greatly by that point.

I was getting pretty worn down by that point, so I just sat down and waited for The Brian Jonestown Massacre to start. Most bands only had 30 minutes between sets and 45 minutes to play, and while the Horrors had been given an hour to play, BJM were still scheduled to go on a half hour after that. Despite their 12:15am billing, they were still setting up at that time. They finally hit the stage at 12:45.

Admittedly, the setlist was awesome, even if they didn't really play any of their "hits". They mixed several classics from their great 90s albums with a few new tracks ("What You Isn't", "Days, Weeks and Moths"). They claimed that they had never played two of the songs live before ("The Devil May Care", "No Come Down"), both of which were great tracks that I was happy to hear. It was also great to see longtime member Matt Hollywood back in the band; he even sang lead on two songs ("No Come Down", "Oh Lord").

But that's about where the party ends. First of all, the band itself is confusing. Their current form has eight members: frontperson/singer/guitarist Anton Newcombe, apparent second-in-command/guitarist/vocalist Matt Hollywood, two other guitarists, a keyboardist/guitarist, a bassist, a drummer, and the humorously odd tambourinist Joel Gion. For having four (or sometimes five) guitarists, you'd expect a lot of nuance to their sound, but in fact, they usually all played the exact some chords. Some were even playing what appeared to be identical instruments. The music was cool, but I couldn't help but feel like there were some inherently wasted opportunities. At times one of the guitarists would play a lead line recognizable from the recordings, but the others would still be sharing a single part.

Second, partway into their set, the sound of horrible, all-consuming feedback enveloped the soundscape. It wasn't the ear-destroying screeching of microphone feedback, but more akin to the loud, warm sound of a giant engine. It didn't destroy the music, but it was louder than it, and it kept going for several songs, only fading when they paused between songs. By watching the performers carefully, it was clear that Anton's semi-hollow guitar was the culprit – and I've heard the same voluminous sound from similar instruments. Oddly, no one else seemed to notice, not on stage nor in the crowd. I wondered if I was just in some terrible type of dead zone, but I moved through the crowd and it wouldn't go away. After four or five songs, it finally faded away for good, but it had ruined half of their set in the meantime. I don't understand how their extra half-hour of soundchecking resulted in them having the worst sound of any performer at the festival. How did they get that so wrong? Perhaps having so many redundant guitarists didn't help the problem.

But that's not even the worst thing. Since they started a half-hour late, and I had heard the festival was to end at 1:30, I assumed they'd still give us 75 minutes of music as scheduled. Like I said before, certainly no noise ordinance could be in effect, so who would mind if they played late? However, at 1:30, they unceremoniously bowed out, awkwardly looking at each other and questioningly laying down instruments. They finally mumbled some words of appreciation and then left. The audience cheered for more, but house lights and PA music came on, and stage hands came out, indicating that the show was over. No encore. 11 songs, 45 minutes. That was it. The topmost-billed headliner of the entire festival only played for 45 minutes!

Final Thoughts: First, a word about the environment. Being a ranch, the location isn't exactly great, but there is something nice about being a little removed from the big city and closer to nature. However, the only natural benefit was the backdrop of the Colorado River, and the city is actually inescapable because the airport is very close by and planes continually fly low overhead. My experience was rather dusty, hot, smelly, sunny, and windy, but not so much of any one thing so as to be terribly annoying. In fact, listing those things in sequence makes it sound worse than it was. What was truly annoying was the lightshow. In fact, I'm not sure if it can even be called a lightshow if in practice it just meant blinding the audience. Seriously, those lasers were pointed right at my eyes for almost the entire set by the Horrors and much of the other evening sets as well. I thought I had paid money to see bands play live, not stand in a crowd with my eyes closed.

The other annoying thing was that there was absolutely no oversight of the shuttles at the end of the night. A line formed, but when I say "line", I mean "mob", and it got a little pushy after the first shuttle filled up and we had to wait for the next one, which was going to a different location anyway. I did get on the third one, but there were plenty of people still left behind after that.

I think the overall experience was cool. Ultimately, I didn't really see any great performances, but I did see a lot of good bands, and I had a fun time. I think the sum was actually better than the parts. I'm still not going to give an "overall score" as I have occasionally done before, but don't let all the B grades make you think I didn't enjoy it enough.

Scores:
Temples: B
Mono: B-
Unknown Mortal Orchestra: B+
Medicine: B-
The Horrors: B
The Brian Jonestown Massacre: D+

P.S. BJM is a really good band, and I'm not happy about giving them such a low score, but that's what they deserve. It might not even have been their fault; it's entirely possible that the sound techs, the venue staff, or someone else entirely sabotaged their sound and schedule. Whatever the case, it could have been so much more.
Posted by Patti at 4:46 AM