Introduction: I heard about the Psych Fest when I was at SXSW, when it came up in connection to some of the psychedelic bands I saw there. I was immediately interested, but frustrated that it was going to be taking place on the edge of town, in a location essentially inaccessible by bicycle. I wrote it off at first, but then a week before, I checked the details again and heard about a shuttle from downtown Austin. That just about sealed the deal for me, so I decided to go for one day and check it out.

Learning from my past festival experiences, I decided it would be best to show up early. The bands started playing at 12:30 and I got there about 3. However, unlike other festivals that end around 11pm because of municipal noise ordinances, the Psych Fest actually takes place just outside city limits and thus is free from such limitations. Somewhere I read that it would wrap up around 1:30am. 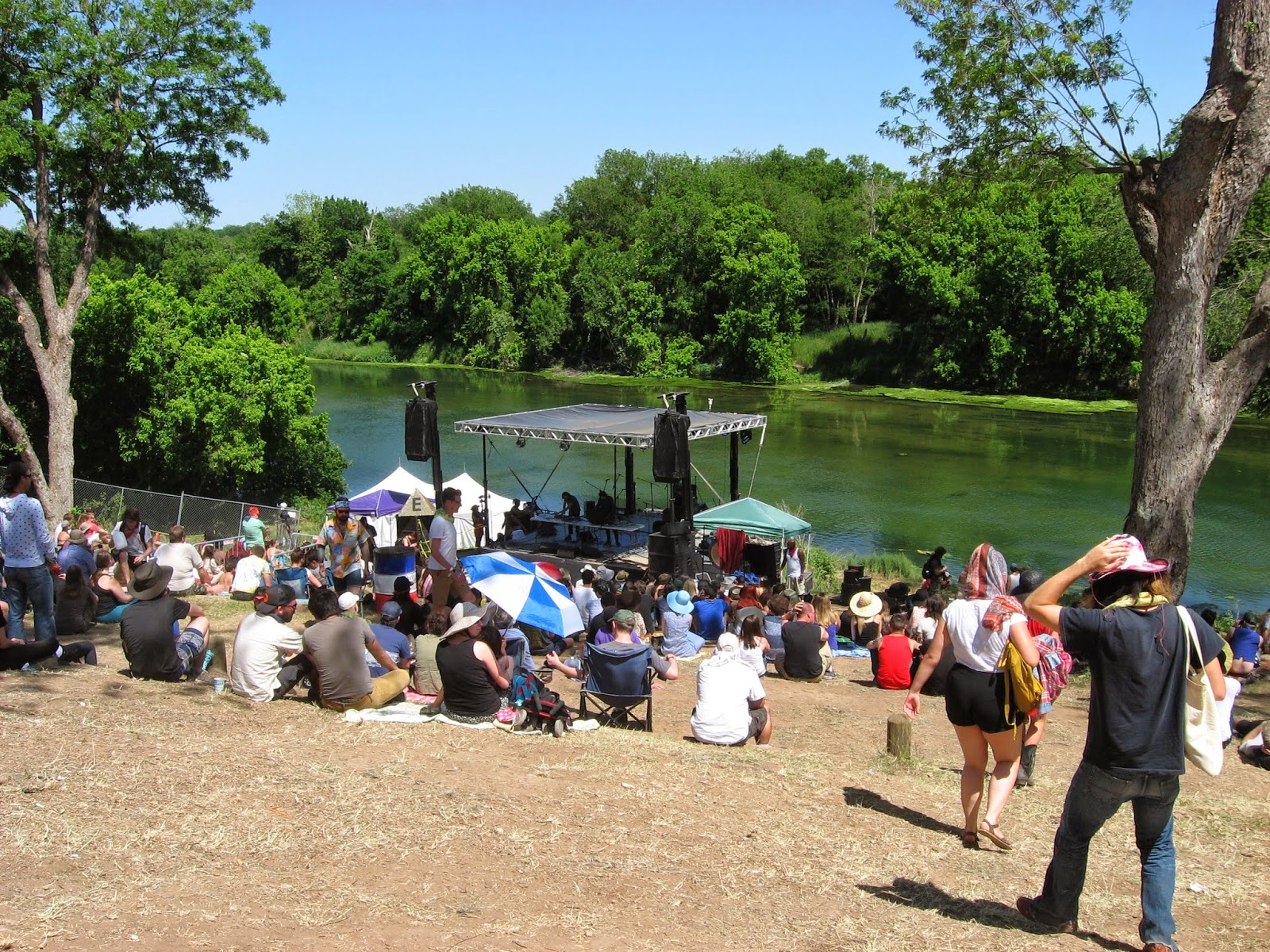 [Barn Owl at the Elevation Amphitheatre, overlooking the Colorado River.]

After riding my bike to the shuttle stop, waiting for the bus, finally getting on and getting to the venue, my ticket wouldn't scan. Before I could even protest, the person doing the scanning just waved me through and told me it was fine; he didn't care. Once I finally got to the grounds, I was conflicted whether to see Barn Owl or Steve Gunn. I first opted to see Barn Owl, assuming that their experimental electronics would be more interesting to me, but I was quickly bored by their noisy drones, so I turned around and caught most of Steve Gunn's set. Apparently once part of Kurt Vile's backing band, he's had a solo career for a while as a singer-songwriter with a guitar-centric folk/jam bent. I thought his guitarwork was excellent, particularly with regards to his fingerpicking technique. He was better than I was expecting, but mostly stayed with the tried and true. He had a few sound problems, and the bassist's EQ was biased far too low to allow for a good sound balance, but the music was still pleasant. 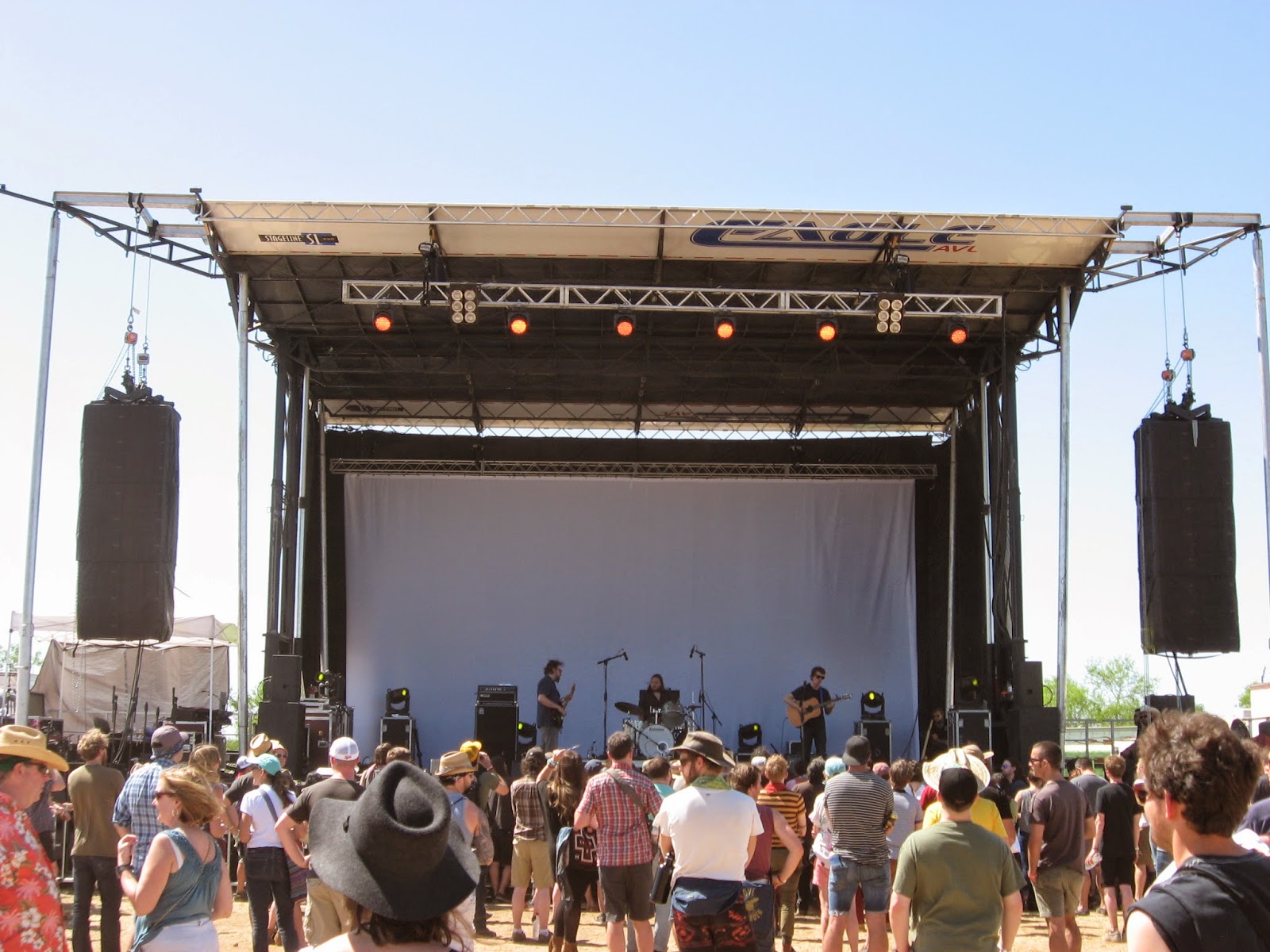 [Steve Gunn at the Reverberation Stage, presumably the "main" stage.]

I couldn't resist seeing Boogarins again, even though I'd just seen them at SXSW in March. Now that I have the album and I've studied it in depth, I felt like I could appreciate their live performance even more. However, of the seven songs they played, only three were from their album ("Infinu", "Lucifernandis", "Doce"), but each one was extended with additional jam sections. The other four songs were presumably all new works destined for a follow-up album. I thought the mix of old and new was perfect, especially since they'd retooled the old songs to keep them fresh and dynamic for the live experience. While I don't think they were as heavy as last time I saw them, they still had a lot of power. The brighter sound of their record was a little more obvious, lending them a nice balance between serious virtuosity and sunny melodies. Their bassist really stood out, and the lead guitarist was great, too, even if he relied on his rotary effect just a little too much. 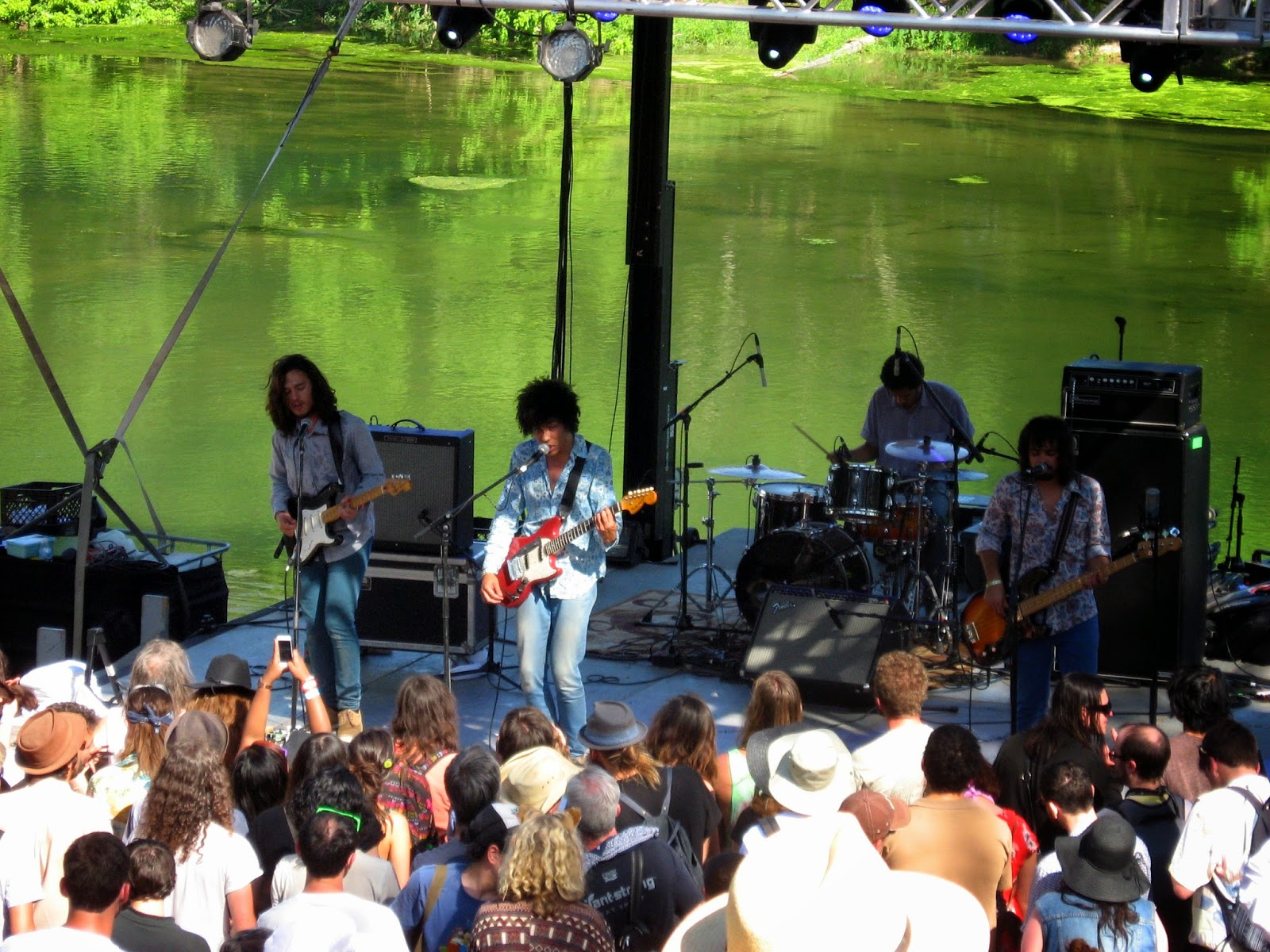 I was hoping to catch the last ten or fifteen minutes of Pure X, but they were wrapping up as I approached the stage. The few minutes I caught sounded oddly similar to Steve Gunn. The folky vibe seemed in defiant contrast to their name (reduced from their original name, Pure Ecstasy).

Instead, I headed back to the Elevation Amphitheatre to see Jacco Gardner, a Dutch musician who seems to have his head stuck in the 60s. Retro can be cool, and his keyboardist's tones were great, but the overall sound just felt too predictable and derivative. It wasn't a bad sound, but it wasn't a very clever or creative sound, either. It didn't help that the bassist was way too loud and the lead guitar was all but inaudible.

I was getting hungry at that point, so I found an African food truck and ate vegan curry while watching part of a set by Bardo Pond. I liked the vocalist and her flute contributions, but the guitars were pretty basic, which made having two seem rather redundant. Their sound was heavy, sludgy, almost doomy. The dragging tempos and dark sound were offset by a warmer high end from the flute and vocals, which were the only part that I actually enjoyed. 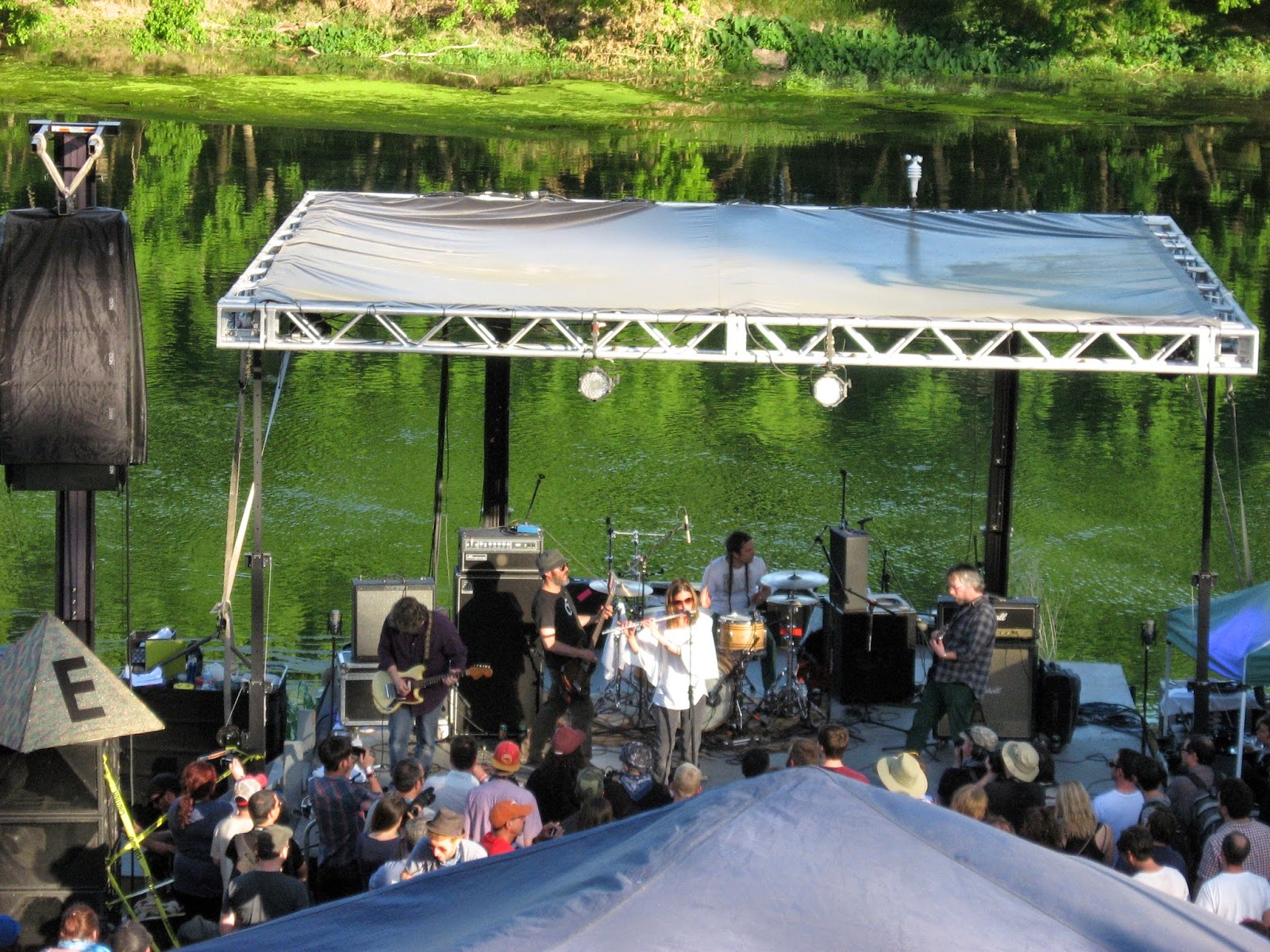 After just recently seeing Imarhan Timbuktu at SXSW, I was both intrigued at the prospect of seeing another Tuareg guitarist and simultaneously concerned that it might sound a little too similar. Thankfully, Bombino exceeded my expectations and went in a rather different direction. The core of his guitar technique was similar to Imarhan's (which is to say it was fantastic), but whereas Imarhan was admittedly somewhat static in their sonic palette, rhythms, and tempos, Bombino wasn't afraid to borrow more from other genres. (To be fair, when I saw Imarhan, they were playing without their full lineup, so I can't really say I saw the real deal.) Bombino used a similar method of playing sharp riffs running up and down the scales, but his guitar tone was a little more distorted and searing. His second guitarist kept it simple, employing few chords but careful rhythm, while the bassist played more dynamically. The drummer was quite exciting, too, playing a variety of beats and rhythms that made each song feel a little different. The grooves were consistently comfortably danceable, and I couldn't help but feel that a little funk or reggae influence had crept in. 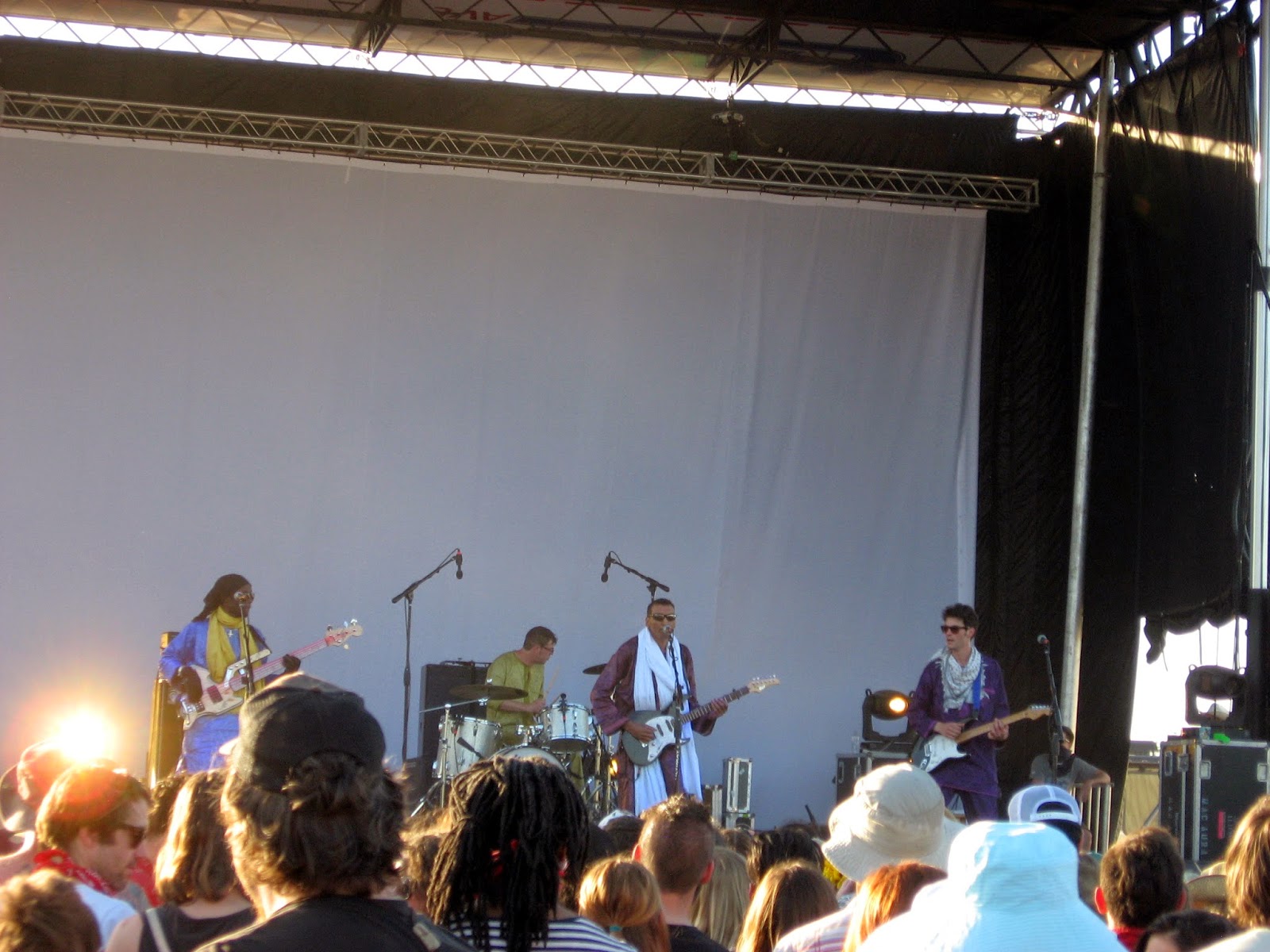 I finally went to the third stage, the Levitation Tent, to see most of a set by The Octopus Project. At first I thought their vocals were awfully hard to understand, but then I realized I was actually hearing a theremin! I looked closer, and sure enough, a woman (who I could swear did sing at some point) was holding her hands carefully in the air near some gadgetry. (I've never seen one in concert before, although I did play with one once at an ironworks museum in Germany.) I liked that the band could switch between noisy electro-rock and something akin to dancey synthpop. I didn't think the performance was actually particularly exciting, but I was intrigued enough that I'd like to see them again, especially since they are from Austin. 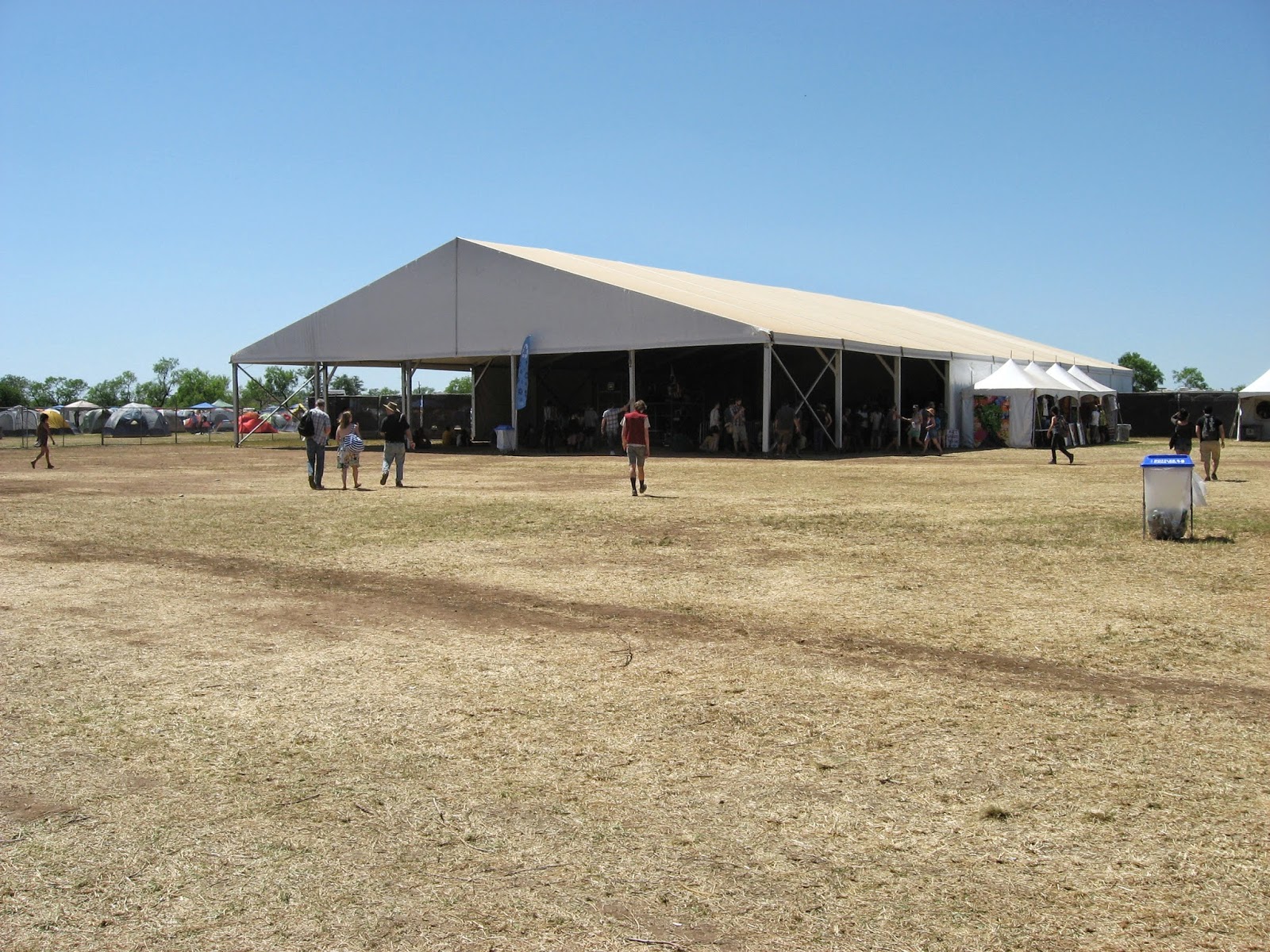 [The Levitation Tent. No musicians pictured due to the lighting in the tent.]

P.S. I didn't see enough of Barn Owl or Pure X to be able to judge them appropriately.

P.P.S. The rest of the day will be continued in the next post!