When I heard that Goblin was coming to town, I couldn't resist my curiosity. I didn't know too many details about the band, but I knew a few important things that probably everyone else in attendance knew: Goblin is an Italian prog rock band from the 70s that wrote and recorded the soundtracks to several big horror films, including Deep Red, Suspiria, and Zombi (Dawn of the Dead). While others may be able to say more about the films in questions, I barely remember the ones I have seen, and I don't even know if I'd enjoy them now. But of the Goblin-scored movies I did see many years back, the thing that sticks in my memory the best is, naturally, the music.

Pinkish Black was apparently only announced as the opener on the day of the show, although it would seem that they've been opening for Goblin for the length of this US tour. The band is a drone/doom/dark ambient duo from Denton, Texas. One member drums and possibly handles some sample manipulation and the other does the vocals and keyboard/synthesizer work. For not having a bassist, their low end was made quite thick and heavy just from the keyboardist alone; he dedicated a lot of attention to the bottom of his instrument's range and used effects and distortion to bolster the sound. They played six rather long songs, each of which included extended droning or ambient segments that eventually built into bigger, louder, heavier sections. The energy noticeably picked up in the middle of the fourth song, when the drummer switched from a slow beat into a rushed, double-time part. The fifth song was particularly heavy as well, which made it seem like there was a carefully planned arc of energy in their performance. I could barely understand the lyrics, and the style doesn't really excite me, but I found the set to be oddly compelling nonetheless.

Goblin has had a long history involving many changing lineups. Currently, original keyboardist and bandleader Claudio Simonetti plays in a separate band that also performs Goblin material, but otherwise, this version of the band is about as authentic as is possible. The band features original members Massimo Morante (guitar) and Fabio Pignatelli (bass), augmented by longtime members Maurizo Guarini (keyboards and vocal effects) and Agostino Marangolo (drums and percussion effects). This tour also features a conspicuously younger American by the name of Steve Moore on keyboards. 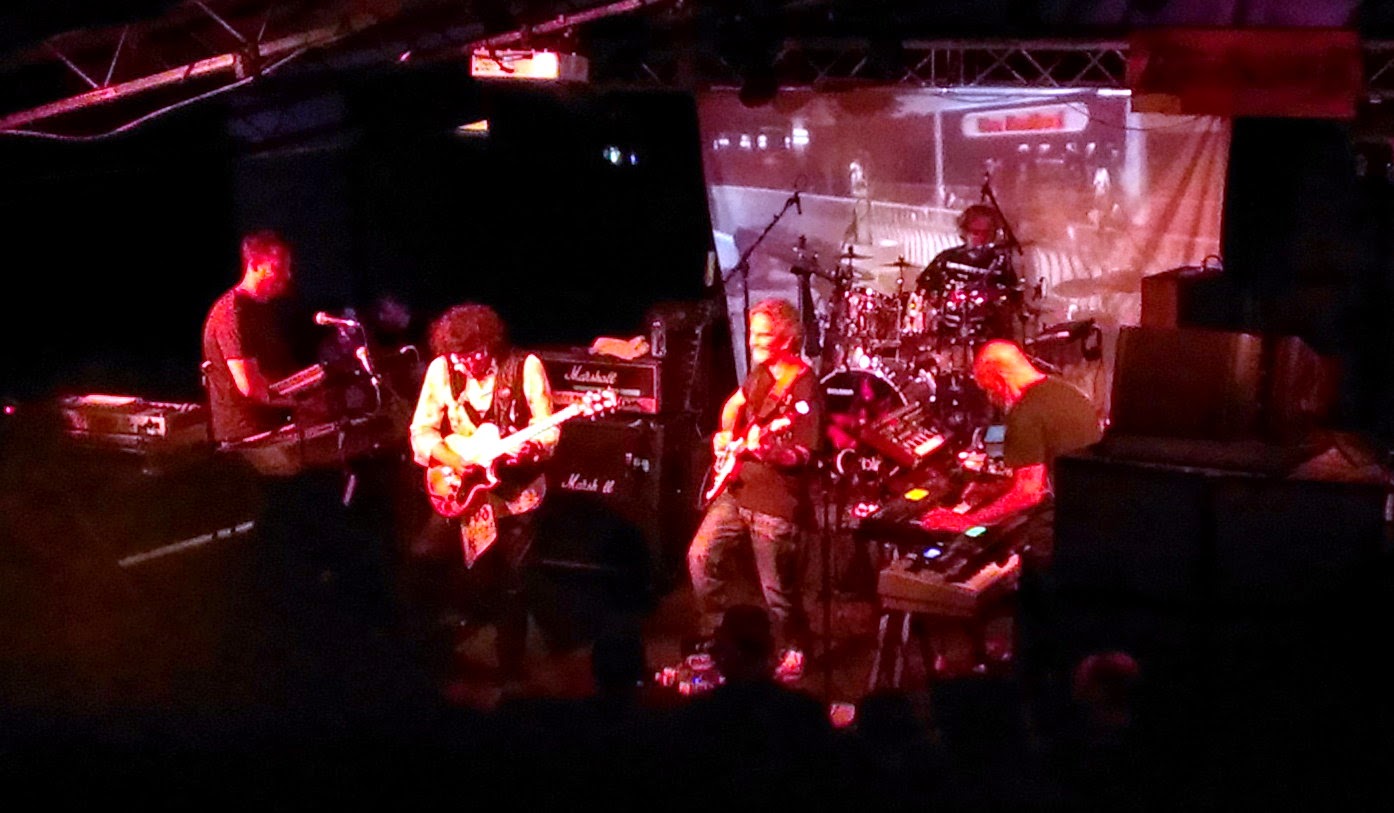 [Goblin in their element, performing with film projection.]

I tried to follow the setlist, but my familiarity with specific song titles is far too limited. I believe that what I saw was very similar, if not identical, to the rough setlist for a recent St. Petersburg, Florida show outlined on setlist.fm. The band announced some titles, but for others only mentioned an era or a film. Hence, I know they opened with "Magic Thriller" from their recent Back to the Goblin album, followed by "Mad Puppet" from Deep Red. This led into several works from their early non-soundtrack albums, such as Roller and Il Fantastico Viaggio del Bagarozzo Mark. Then they broke into a series of works from their most popular soundtracks – Zombi, Suspiria, and finally Deep Red. In each case, I think they played a medley or sequence of pieces from each soundtrack (which is not clear from the setlist.fm tabulation). That was the end of the main set, but they returned for a brief encore to perform "Zaratozom" from Zombi.

I think Goblin knew that it was far more likely that most people in the audience would recognize the big soundtrack compositions over their non-soundtrack and latter-day works. However, I was impressed that the quality of these less famous pieces was still quite high. Until they announced that the midsection was mostly non-soundtrack work, I had just assumed they were from a film I hadn't seen, as the style and atmosphere of those pieces fit right in with the rest. Admittedly, a few selections felt a little uninspired or uninteresting, but then again, there are sections of the soundtrack works that drag just a bit, too.

In particular, the opening selection, "Magic Thriller", was one of the highlights of the set, despite being from a latter-day recording made in piecemeal fashion as the band's reunion coalesced. Just as with the best classic works, the song featured fantastic spooky keyboard work, precise and spiky bass and drum parts, and sharp guitar riffs. The best part of the show was watching the musicians play very complicated prog-rock styled parts in perfect harmony and rhythm. While there were plenty of more ambient, slower sections, most of the set kept a high level of energy, such that the night went by faster than I would have guessed.

Morante appeared to take on the role of bandleader, occasionally loosely conducting the rest of the band and grabbing a mic between songs to offer thanks. His guitarwork was great, even if he did sometimes wander into the territory of indulgent, pointless solos, but he may have been overshadowed by Guarini, whose keyboard rack was frequently in the spotlight. I can only wonder what Simonetti would have added if he was there, but his replacement, Moore, seemed to fill the gap suitably. His parts were far less showy, but I did catch him providing wailing moans on one song and even saxophone on another. Pignatelli and Marangolo should not be overlooked in the least, as both were experts with their instruments, and even if they appeared fairly reserved, they played intricate parts that laid down a solid backbone. Without their careful precision, the performance would have fallen completely flat.

The audience perked up considerably when the band switched to the soundtracks, and corresponding film segments were projected behind the band to also help set to mood. The selections from Suspiria were probably the high point for me, being the perfect intersection of haunted atmosphere, unusual sounds, and perfectionist instrumentation. Morante even switched to a bouzouki for the trademark main theme, and Guarini spoke-sang the creepy vocalization part through some dense effects. The Deep Red pieces were also very good, and had a heavier, more intense sound, bringing the energy to a peak before the band left the stage.

Part of the fun of the whole thing was watching a mostly male crowd, almost entirely dressed in black, rocking out to an aging, purely instrumental progressive rock band that doesn't really move around much on stage. Goblin's sound is only a slight shade darker than that of a band like Yes (or maybe even Genesis or Hawkwind), yet the only major difference in style is the absence of conventional vocals. The audience, opening band, and PA music were more in line with a gothic, darkwave, or even metal scene, but yet here was a band that doesn't really fit into any of those genres. This is most likely simply due to the horror movie connections, but if Goblin didn't have that connotation, I wonder what their audience would be like. I can hardly complain; I'm just glad they were able to find their place in history.

Scores:
Pinkish Black: B-
Goblin: B+ 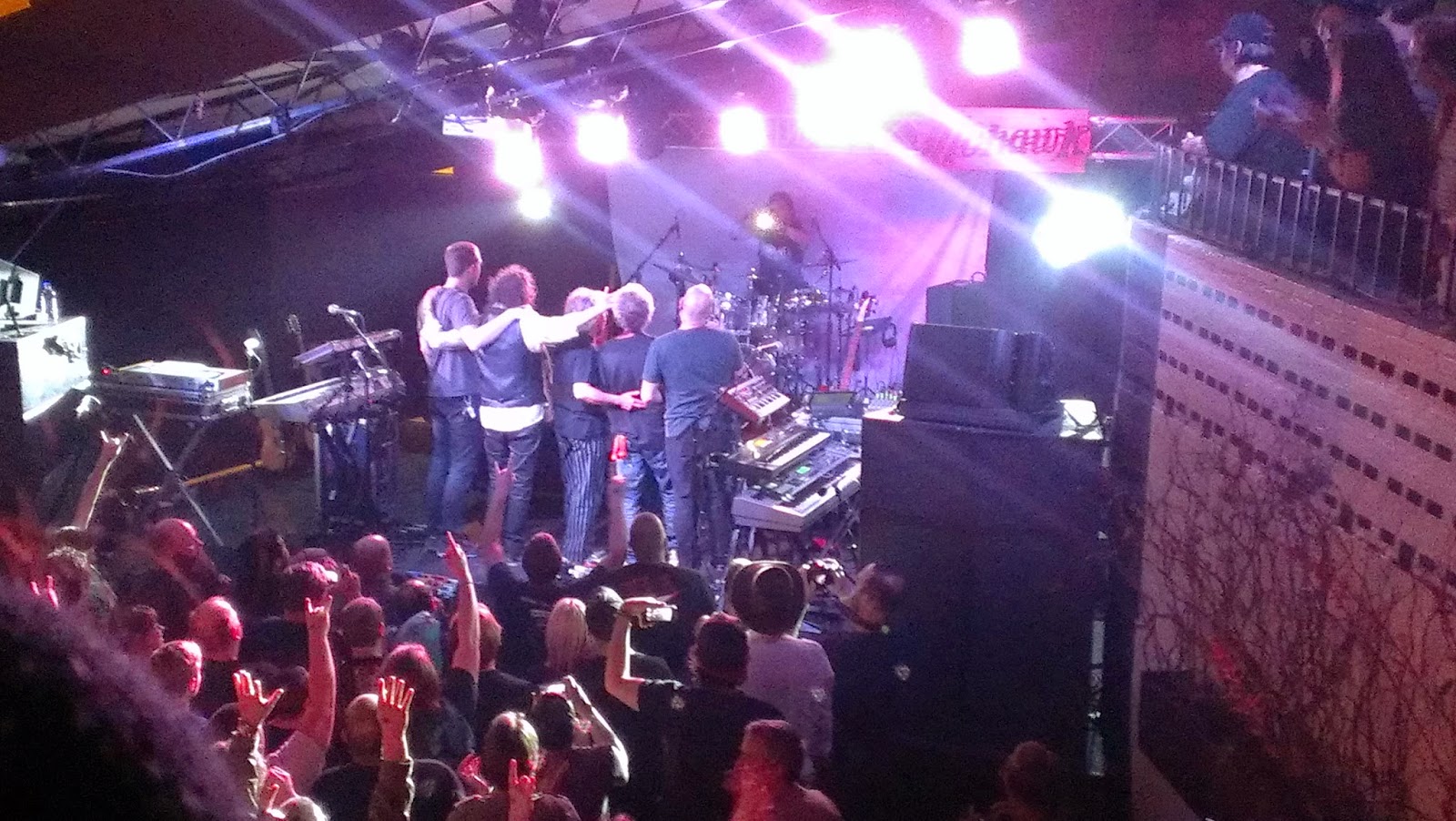 [Goblin getting a picture with the audience before leaving the venue.]
Posted by Patti at 5:33 AM