Eight years after I studied abroad in Vienna, I finally returned with my spouse. While we were there, we couldn't resist the opportunity to see one of the major orchestras perform in a beautiful venue. I even sprung for tickets slightly more expensive than the cheapest available so we could be in a balcony and get a good view. It was well worth it! 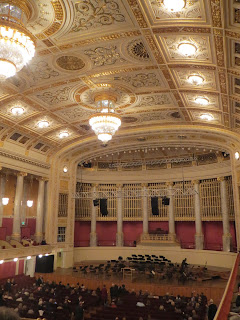 [The fantastic Großer Saal (Great Hall) of the Konzerthaus.]

The performance opened with the overture to Die Zauberflöte (The Magic Flute), a quick, six-minute run-through of the high points of the opera. It was active, vibrant, and strong, but of course, as an overture, that's exactly how it should be. It was an energetic start to the evening.

The stage was then rearranged to highlight the four soloists of the Sinfonia Concertante: Paul Kaiser on oboe, Reinhard Wieser on clarinet, Eric Kushner on French horn, and Patrick de Ritis on bassoon. This work is well known for the dubious authenticity of the commonly available arrangements, but the version performed here was a reconstruction (presumably by Robert Levin) that supposedly approximates the original lost score. I found it to be good and consistent, but rarely remarkable. In several parts, it seemed as if all the strings were all playing a single, unified melody, which is musically rather trite, but it was nonetheless fun to watch the bows all glide and jerk about simultaneously. Close listening to the soloists was well rewarded, as these were performers of the highest caliber, and their careful attention was subtle but delightful. The segments of trade-offs between the soloists and the orchestra were particularly exciting, and the final crescendo was quite a thrill as well.

The final piece featured no specific soloists, but the wind instruments were still very important. The first and third movements were some of the best parts of the night, but the second was a bit of a drag. The first movement started very dark and gloomy before gradually lightening up. Once it got going it became very active and driving. The combination of the timpani and bass was perfect: they worked in lockstep to build a great rhythm. The second movement was conspicuously slower and dreamier. It left me feeling like I was drifting in the clouds, which might be pleasant in some sense, but my focus wandered. The final movement restored the mood with full energy and I was even pleasurably caught off guard by the false endings. 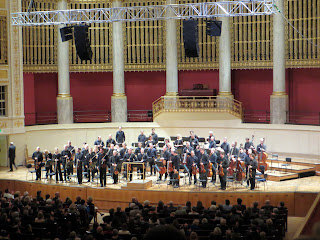 [Conductor Ádám Fischer can be seen departing on stage right.]

This was what I presumed to be conclusion of the night, but the show actually continued on in the central foyer of the venue! This event happened to be one of four in this concert season that were designed to be a little short and without intermission, but which then provided an opportunity to hang out a little longer and meet the orchestra musicians while a smaller ensemble entertained. In this case it was the Quintetto Sinfonico, a wind quintet that provided light, airy background music from a small stage in front of a large Beethoven statue cast in sinister red light. Their performance was pleasant but insubstantial; it was a nice bonus but was no major draw in itself. Due to the lack of documentation, the ambient noise of conversation, and my inability to adequately parse the group's spoken comments in German, I do not know what they performed, but I gathered that it continued the Mozart theme. 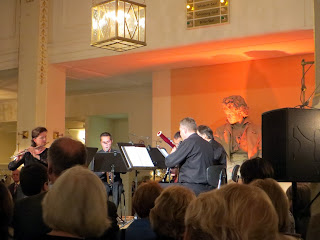 [Quintetto Sinfonico on a temporary stage under Beethoven's dark countenance.]

I might have favored a slightly more substantial primary program over the Konzertausklang (finale) provided by Quintetto Sinfonico, but the idea is not without merit. Similarly, the overture to Die Zauberflöte may have been a little brief, but at least it was a high-quality distillation of the larger work. The best parts of the Prague Symphony were likely the high points of the evening, but since the middle passage dragged it down, the Sinfornia Concertante was the more consistently satisfying work. Furthermore, the interplay between the soloists in that piece was a clear highlight. Even if no piece was perfect, they were all of high quality, and I'd be hard-pressed to pick a favorite.