I've seen Peter Murphy twice before (in 2009 and 2014), and neither time did he particularly impress me. Nonetheless, I couldn't resist seeing him again, especially since this tour was advertised as being a stripped-down, primarily acoustic affair. I also initially held out some hope that I might see a partial Bauhaus reunion since David J was scheduled to play two days later at Levitation. (More on that in my next post.) That didn't happen, but I didn't really expect it to since David J later announced a show in California on the same night as this show.

When Casual Strangers came out, I thought two of the members looked awfully familiar. I quickly realized they were Paul Waclawsky and Jaylinn Davidson of The Boxing Lesson, whom I had seen open for Murphy in 2014! However, instead of a rock-oriented approach with prominent lead guitar, this band aimed for a chilled-out, contemporary take on Kosmische Musik. Waclawsky still played some guitar, but in a more effect-laden, spaced-out manner, and he also played keyboards. Davidson again used a variety of keyboards, and they were joined by Katey Gunn (who looks like she could be a sister to Davidson) on electric slide guitar and keyboards and Jake Mitchell on drum pads, drum machines, and keyboards. It was a very synthetic experience, but one that worked. While very much a cosmic affair, there was just enough beat and noise to keep things interesting. It was relaxing and put me in a good mood. 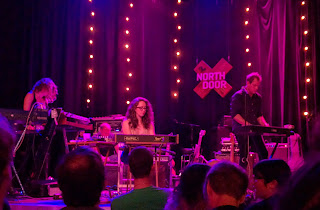 Peter Murphy was joined on this tour by longtime bassist/violinist Emilio DiZefalo-China and guitarist John Andrews. When they started out with "Cascade", they relied on some rather heavy-handed samples, and both of the accompanying musicians seemed to have little to do. It wasn't a great start, but thankfully the backing tracks did not reappear too often in the setlist. In fact, although a few other songs did use pre-recorded material ("All Night Long", "The Rose", "Gaslit", and "Your Face"), it was rarely ever again so obtrusive, and usually served to make the songs work well.

On the majority of the songs, the instrumental work was remarkable. DiZefalo-China was the star in that regard. For example, he played the great bass part and all the lead parts in "Indigo Eyes" on his fretless bass, and he adeptly applied effects and clever techniques on his violin to simulate the lead part of "The Bewlay Brothers" and the chromatic piano in "King Volcano". And even when he wasn't doing something unexpected, his bass work and lead violin parts were consistently great. Andrews was no simpleton, either: he mostly played acoustic guitar and filled out a wide variety of complex picking patterns. He occasionally switched to electric guitar, where he would make the songs come alive without overpowering them. He even brought out a bow for "Hollow Hills", which suited the song perfectly!

Peter Murphy himself was in good form as well. It was a bit odd to see him sit for just about the entire performance, but he also played more guitar than I've ever seen before ("Indigo Eyes", "Marlene Dietrich's Favourite Poem", "A Strange Kind of Love", and "The Three Shadows, Part 1"). He might not be the most technically proficient guitarist, but he handles his 12-string guitar with a comfortable ease that makes me wish he'd use it even more. "The Three Shadows" was a real treat, even if Murphy's wordless vocal near the end was off-key. It was a somewhat unexpected choice, and I certainly hadn't anticipated that Murphy would play the main rhythm guitar part. 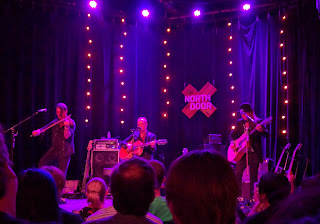 Other than that one bit of vocal faltering, Murphy's voice was soaring. He can still belt out huge songs seemingly effortlessly. His choice of songs was excellent, too: we got two great songs from the underappreciated Secret Bees of Ninth EP, one of the better tracks from Ninth itself, several classics from Murphy's heyday, and a total of five Bauhaus songs. The only weaker moments were "Cascade" (I wish he'd chosen anything else from that album!) and "Lion". Even "Lion" was a touch better than it is on record, and the other song from Lion, "The Rose", was certainly an improvement over the studio version. "The Bewlay Brothers" was a somewhat odd choice, but Murphy isn't new to covering Bowie, and he did it justice. The Bauhaus songs were all quite successful, and "Hollow Hills" was perhaps the best of the bunch: Murphy even played melodica in a few parts. 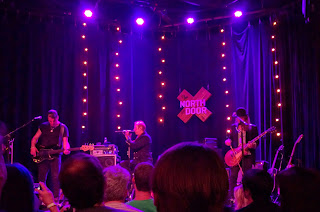 [Murphy on melodica for "Hollow Hills".]

It wasn't clear if Murphy would give us an encore. Several nights of this tour have not gotten one, or just a short one, and the last time I saw Murphy he didn't play his planned full encore. We were graced with a full four additional songs, and when Murphy reappeared, his only words were "I'm a black star, I'm not a gangster", quoting from the title track of David Bowie's last album, Blackstar. He also was adorned with a red rose attached on an armband, which he plucked apart and tossed on his backing musicians before "Your Face". Murphy didn't say much at all through the night, but he did walk to the very front of the stage at the end of that last song to shake hands with audience members. He finally broke a smile and acknowledged the adoration of the crowd.

Scores:
Casual Strangers: B
Peter Murphy: A-
Posted by Patti at 4:42 PM