Introduction: I worked during the day and thus missed any daytime showcases, but spent a long night running between venues to catch a variety of artists I was interested in. From this night onward, as I often found myself in the first or second row, I started taking pictures with my phone. While most didn't turn out well, I'll share a few anyway.

Sihasin (at Javelina): A Navajo duo out of Arizona. Both members sang; one played bass and the other percussion. Amazingly, that was enough. The bass player had a great tone and played with creative skill. The percussionist too was quite innovative with his mix of rock and traditional instruments. They traded vocal parts and complemented each other with simple but strong harmonies. Between songs, the bassist encouraged us to respect each other and fight for rights for all. She was particularly vocal against usage of the term "illegal" to describe humans, which I appreciated. Before one song, they invited a percussionist from the Malian band Imarhan Timbuktu to (literally) sit in with them; she played a water drum considered rare but yet shared by both the desert cultures of Mali and the Navajo. 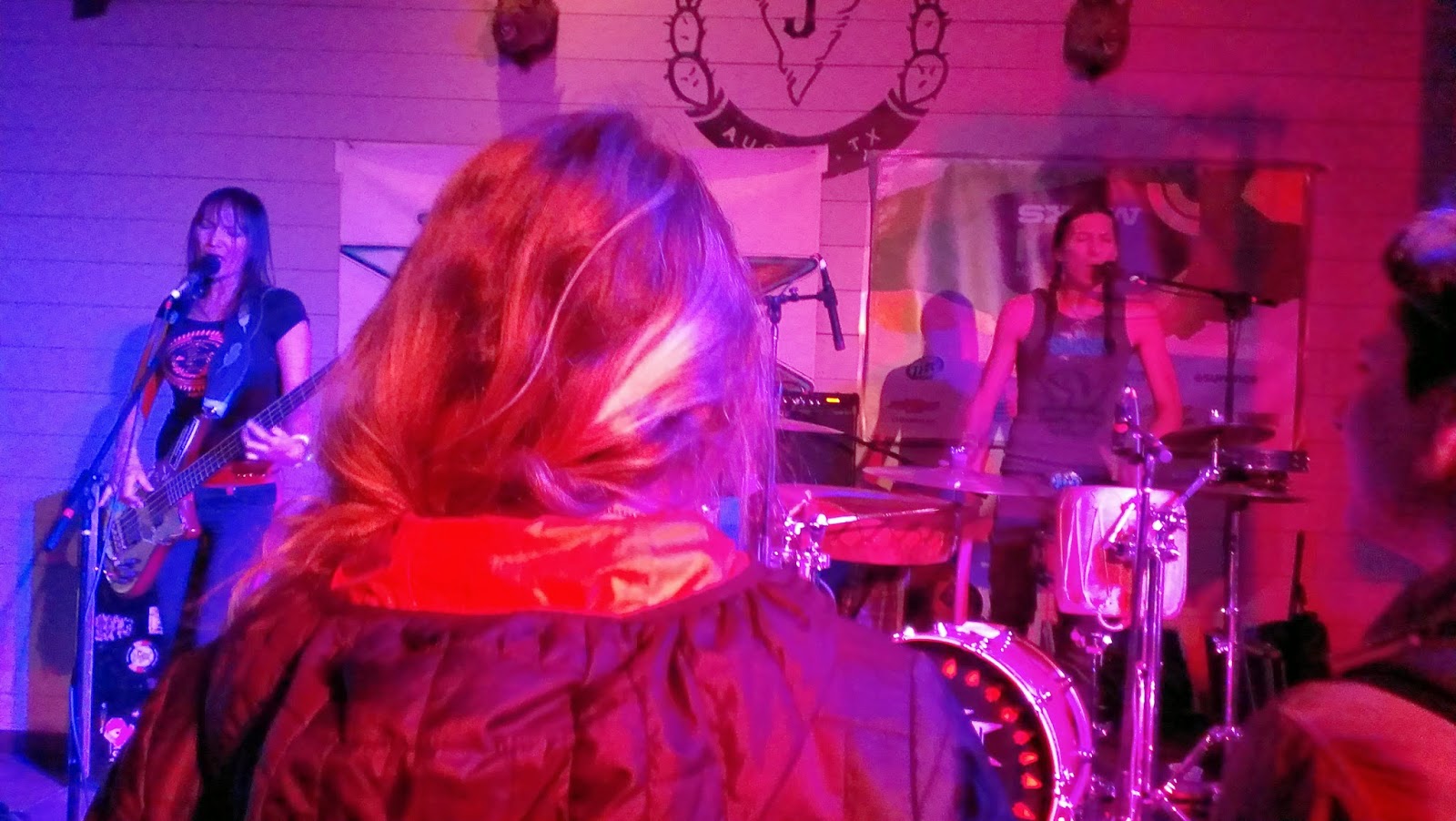 The Great Wilderness (at Javelina): A shoegazing band from San José, Costa Rica, fronted by two women singer/guitarists. They had a definite My Bloody Valentine vibe, but were a little heavier and less concerned with the carefully crafted high ends. I liked the guitarwork, but the vocals were indecipherable and a little too aggressive and heavy for me. 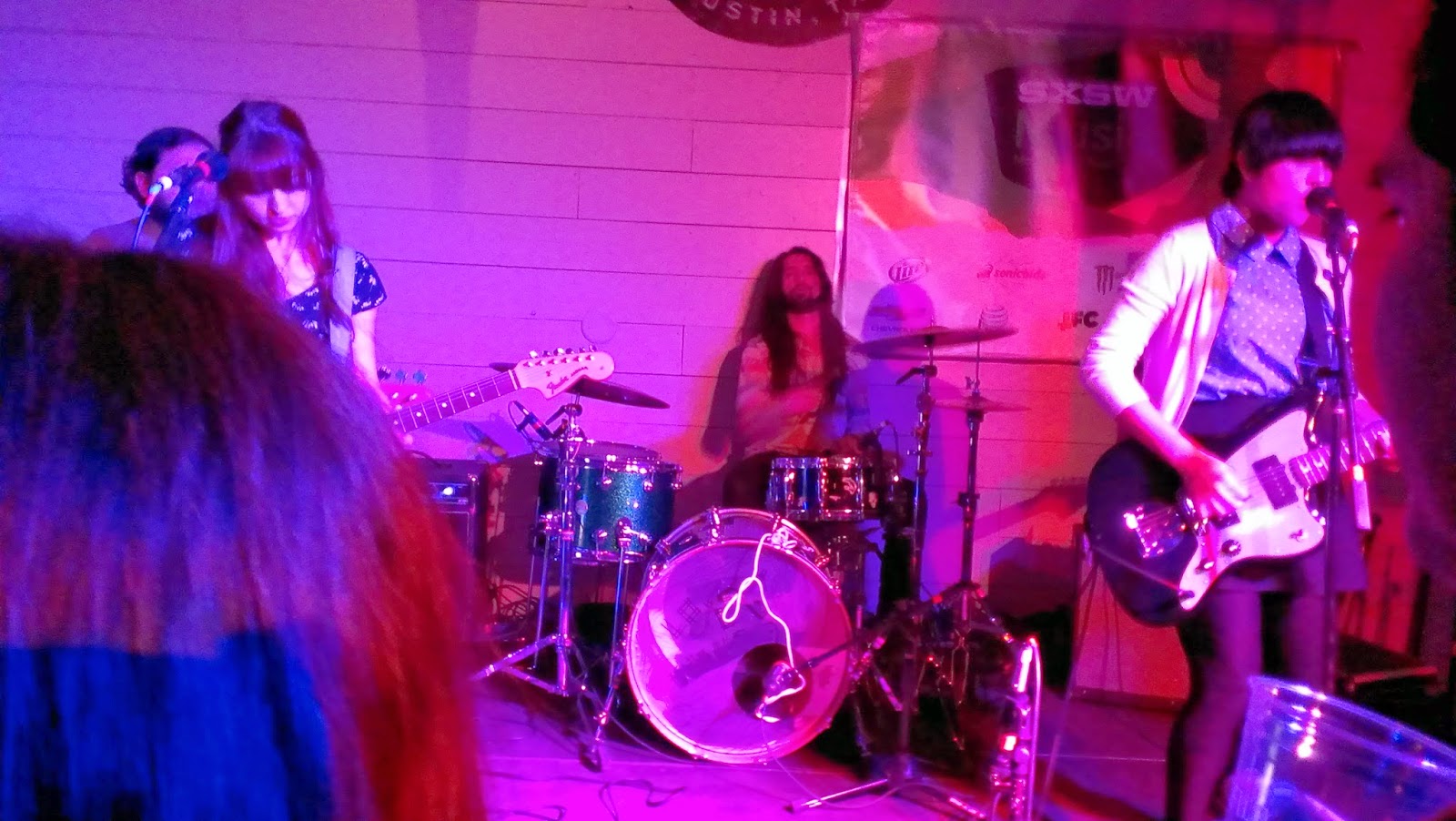 [The Great Wilderness at Javelina.]

Mutual Benefit (at Hype Hotel): First, a note on the venue. It isn't actually a real venue, but rather a temporary, artificial space in some dirty old building downtown. To get people to fill it, they offer free drinks, but the lines at the bar were long and I wasn't impressed by the tenders' arts, so I didn't even try. Most of the crowd was clearly more interested in the drinks and each other than any band on the stage. Hence, my attempts to get a good view and listen of Mutual Benefit were marred by tall dudes milling around talking about boring things. Despite a delay due to feedback and mixing issues, I did eventually get to see the band (mostly). On record, the band is one person and a large cast of guests. Live, they act as a seven-piece, complete with strings and keyboards. The set was short, there were a couple feedback explosions, and I hated the venue, but I thought the band did a good job of reinterpreting the material. I even wrote down the setlist (basically most of their impressive debut album, Love's Crushing Diamond): 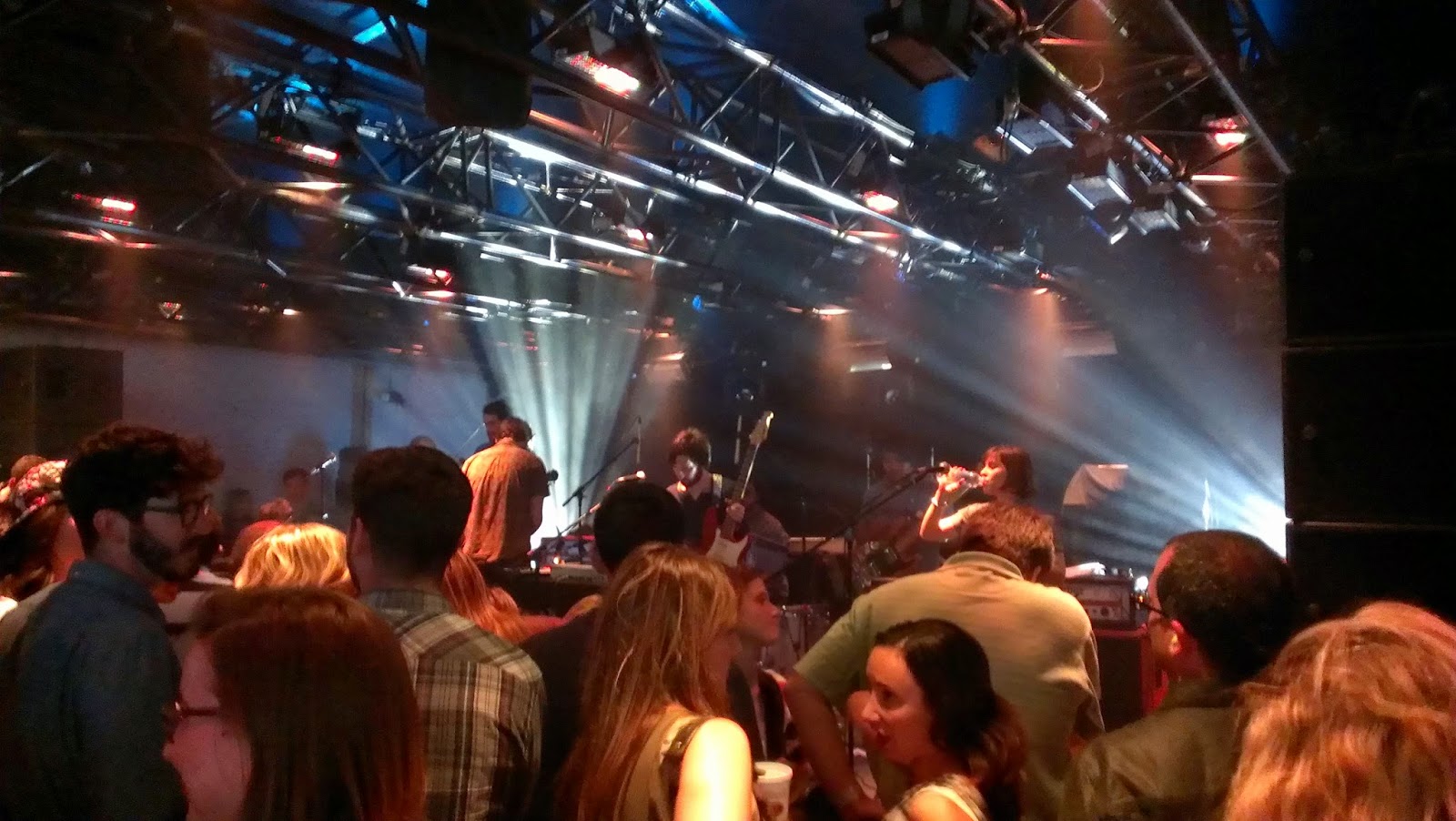 [Mutual Benefit trying to get decent sound at Hype Hotel.]


Sisu (at Valhalla): It was getting late (midnight) and I was getting tired, so I didn't pay very good attention during their set. I was mostly there to see the "headliner" of the night. Nonetheless, their clever cover of The Magnetic Fields' "If You Don't Cry" was unexpected and caught my attention. Their sound was fairly dark and heavy but sadly didn't stand out much to me.

David J (at Valhalla): Perhaps best known as the bassist for Bauhaus and Love & Rockets, he also has carried along a solo career in between and after his other projects. Despite his goth rock roots, his solo work is much more in the vein of singer-songwriter territory, maybe a little folk, and recently, even country. His current band features a standup bassist (Tony Green), a violinist (Aubrey Richmond), and a mandolin player (Lisa Salloux) alongside a keyboardist (Susan Costantini Green), a percussionist with a rather unusual set (Raven), and David on acoustic guitar. Not quite what you'd expect from the man who wrote "Bela Lugosi's Dead". Anyway, to the setlist: 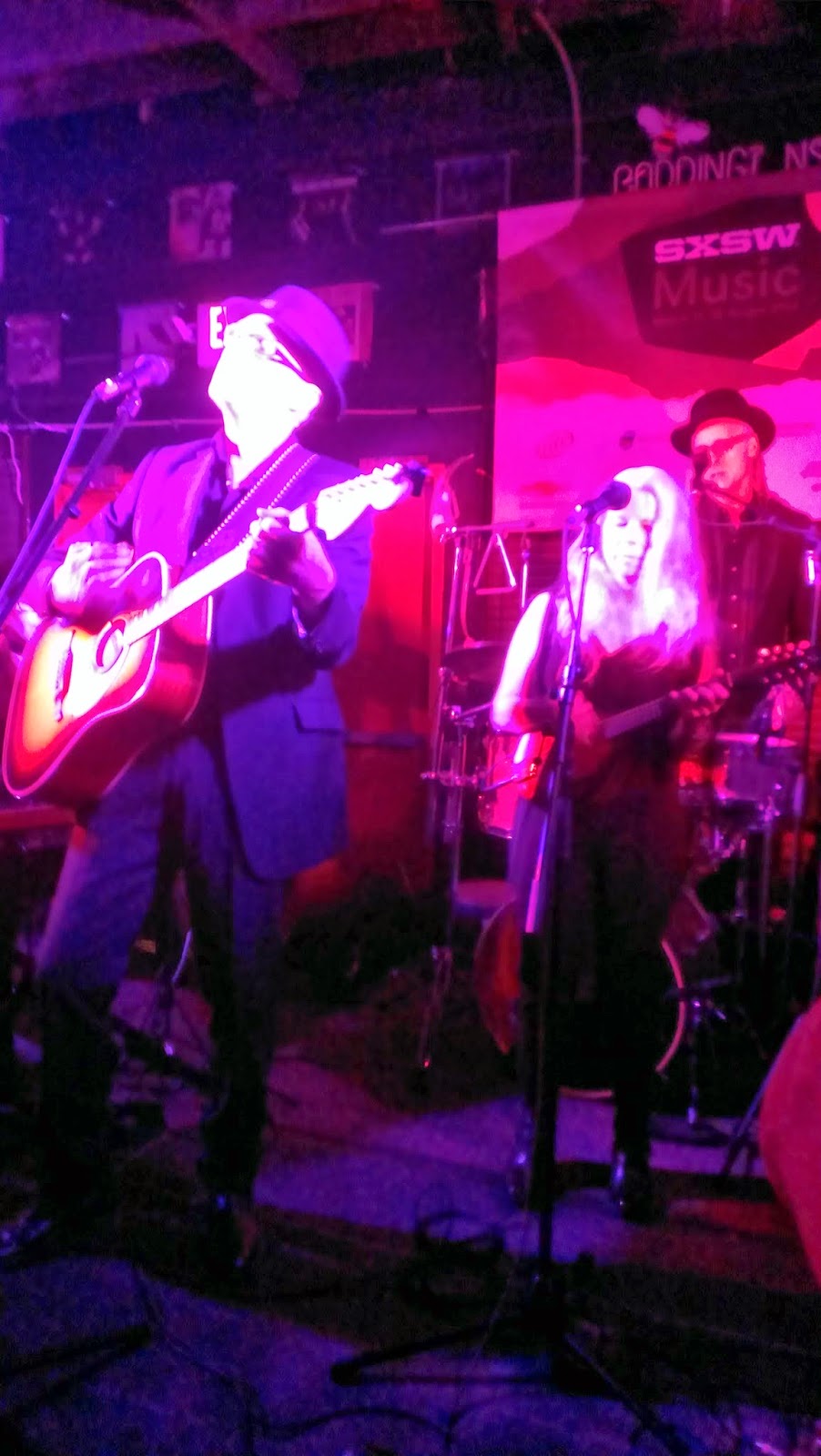 [David J at Valhalla, with Lisa Salloux and Raven behind him.]

The first five songs are all new and soon to be released on a forthcoming album, The Eclipse of Ships. While initially not excited about the project due to supposed theme ("a paean to Woman as muse"; ugh) and the preview video (featuring women in lingerie), after hearing some of the songs, I'm reconsidering my initial opinion. After all, David is not usually one let himself be wrapped in gross cliché so easily. Now I take note that David paid no notice to the women in the video and that his lyrics betray a deeper story of personal and interpersonal growth. And of course, "Where the Bloodline Ends" is rather hilarious and bold.

Gifting us with countrified renditions of four choice Love & Rockets tunes is no small matter, either. I wish I had recordings of these versions; they were actually quite enjoyable and well-arranged. The rather small but dedicated audience begged for more but were let down. I made up for it by chatting with David briefly after the show. When I thanked him for trusting me and sending an extra copy of an album years ago when the first apparently got lost in the mail, he said I "looked like an honest guy". I hardly knew what to say.

Final Thoughts: This was the night of the accident that made many headlines. It happened during David J's set, and Valhalla is on Red River Street, just a couple blocks away from the site. I was safely inside, but it was the word on the street as soon as I left the venue.
Posted by Patti at 2:07 AM