Introduction: Saturday morning I had to sleep in. I also had band practice in the afternoon, so I didn't get out to see anything until a little later. I needed the brief breather, especially since I knew I'd be up really late again.

The first band of the night for me was The Ghost of a Saber Tooth Tiger, best known as the latest band of Sean Lennon, and also featuring model/musician Charlotte Kemp Muhl. I had some reservations on seeing the band due to the thick cloud of celebrity favoritism/nepotism surrounding the band, but I was curious nonetheless. I listened to a few tunes before I went, and they were okay, but their official statement mentioned that they'd grown from their original softer, poppier duo configuration into a five-piece psychedelic band. My interest was piqued. It helped that they were playing at the Parish, one of my favorite Austin venues so far.

When the band came out, there were actually six members – perhaps the guy who just played tambourine doesn't count? Sean played lead guitar and did most of the singing; Charlotte mostly played bass and sang backing parts, but played keyboards on the last song and sang lead on two others; and three other musicians played drums, second guitar, and keyboards. Immediately it became clear that this was a band with some musical talent. There was indeed a psychedelic element, but it was perhaps more in the vein of classic/hard rock. There were a lot of bluesy riffs and oldschool, big guitar solos à la Cream or Led Zeppelin. Whatever traces of mellow pop remained from their previous incarnation were indistinguishable. 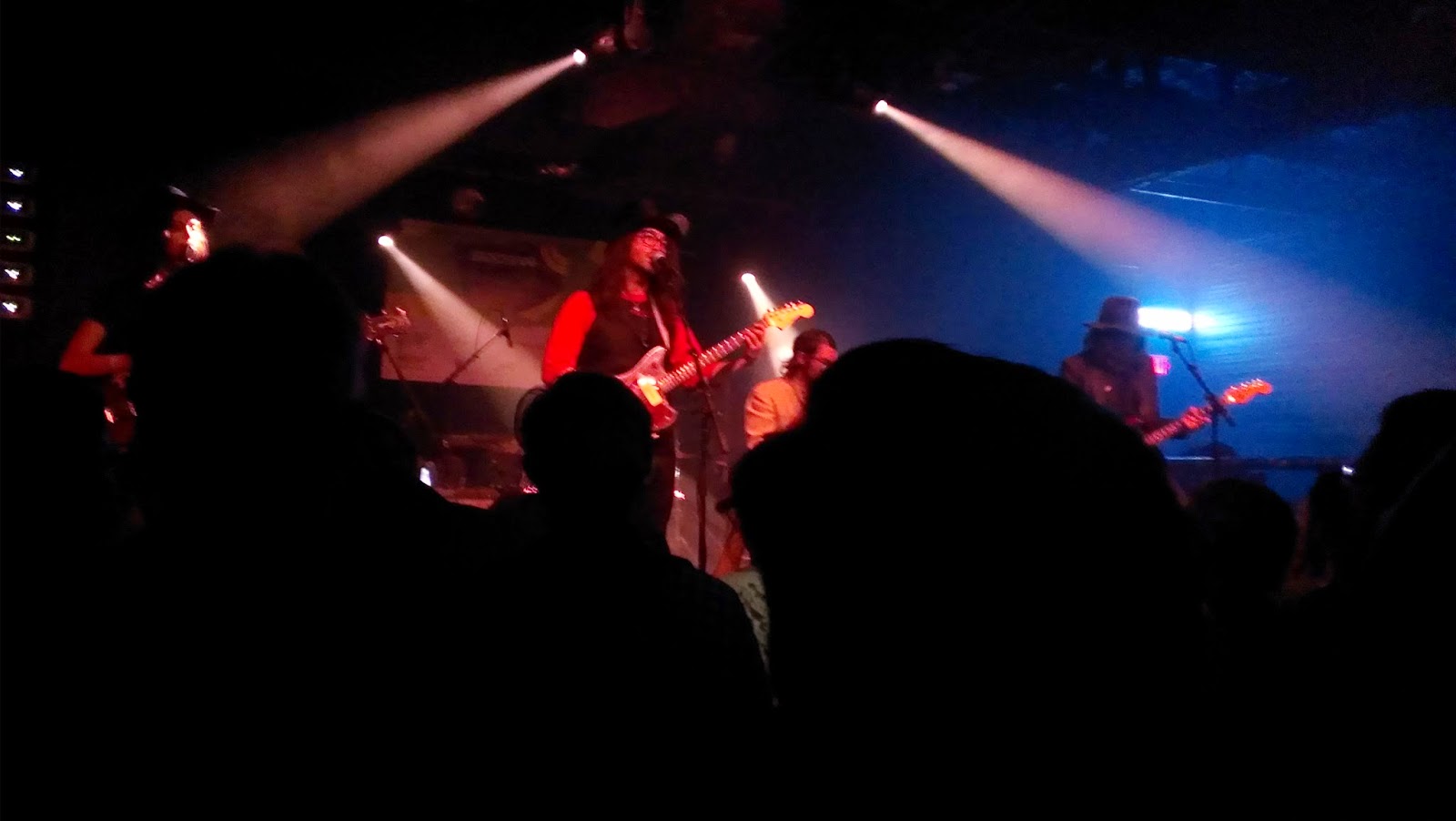 [The Ghost of a Saber Tooth Tiger at Parish.]

Sean was oddly chatty and a little rambly, which made him harder to figure out. Charlotte, too, was a bit confusing, as she seemed rather shy. The two are romantic partners, which probably only matters to the extent that there seemed to be a subdued layer of tension between them at times. At any rate, while I am still a little bit uncomfortable with the premise and personality of the band, I can't deny that they made some quite solid music.

After that, I went over to Shangri-La, where a friend of mine from I Heart Local Music (a Lawrence, Kansas music website) was hanging out and enjoying part of a Midwest showcase. I caught the full set by Be/Non, a reunited Kansas City band. They played a somewhat dancey but heavy variety of indie rock. They had a nerdy vibe but backed it up with some actual smarts.

They were followed by Drop a Grand, a chaotic band also out of Kansas City. Each of the five members wore masks and costumes, and they also passed a few extra masks out to the crowd. They didn't waste much time soundchecking or setting up; they just started right in the show. They played loud and noisily, keeping a strong rock beat but rather simple music. While I enjoyed the spectacle, much of the vocals were distorted and/or difficult to understand, so I feel like I missed out on their intended message. 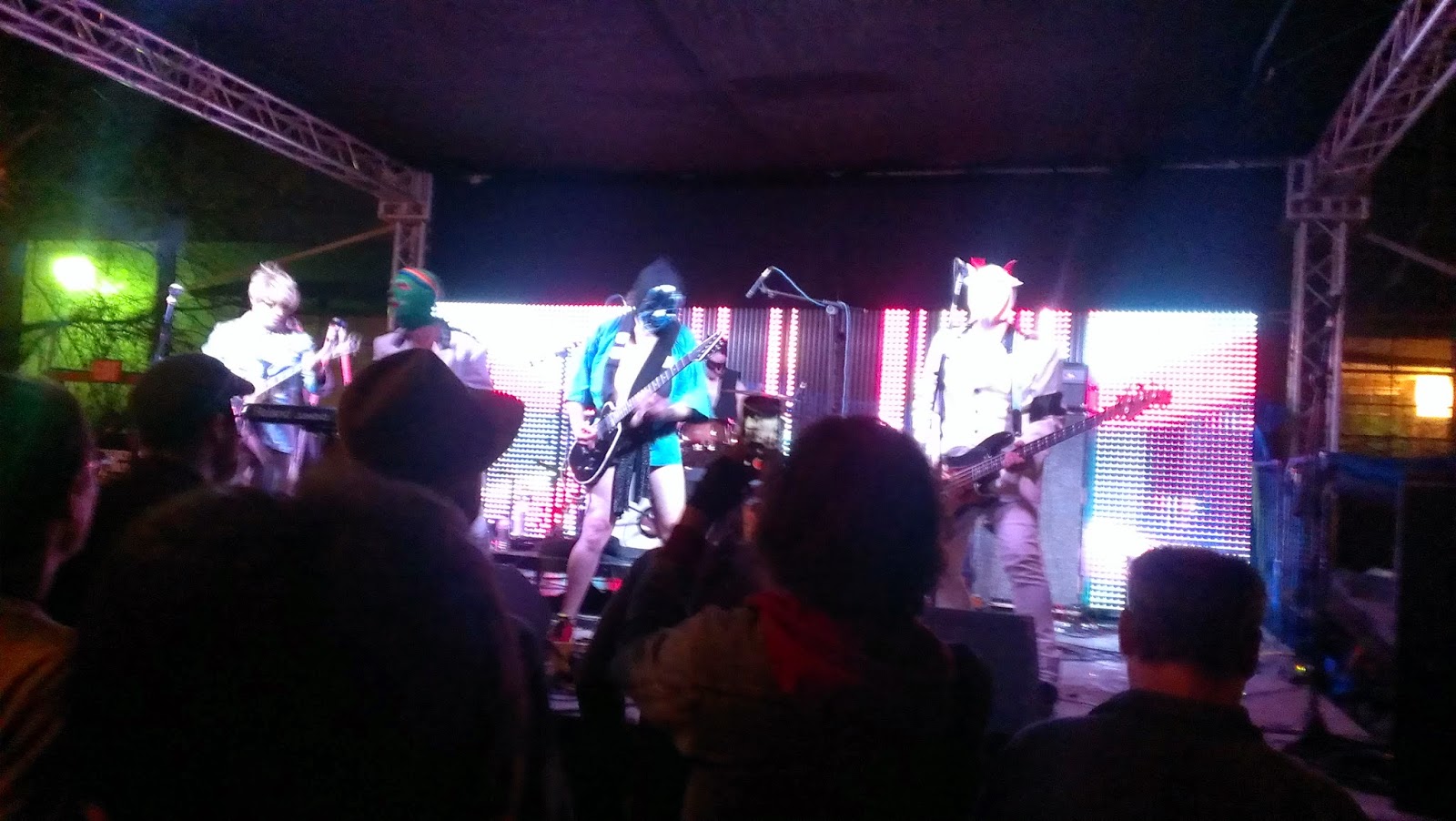 [Drop a Grand at Shangri-La.]

Around that time, there were a bunch of bands playing that I was interested in, so I had to prioritize – and I had a feeling lines would be long at my final destination of the night, so I wanted to be plenty early for that. I was interested in seeing Willie Nelson's set at the Moody Theater (where Austin City Limits is filmed), but I didn't want to battle the inevitable lines. There were a couple more psych bands playing (Temples, Cosmonauts, etc.), but I wanted some more variety. There was even a funk/new wave band out of Moscow (Pompeya), but for some reason I passed even on that.

I decided to go to the Central Presbyterian Church to see Suzanne Vega, a folk artist who'd been on my radar for a long time but who I'd never gotten the chance to study closely. (I'll admit, the fact that I could sit in the balcony and rest my back and my ears was quite appealing, too.) She played acoustic guitar and was accompanied by Gerry Leonard (a regular collaborator for David Bowie as well as Vega) on electric guitar. Leonard's style was a perfect match: he added depth, played exquisite leads, and generally managed to fill any excess space without crowding out the vocals. 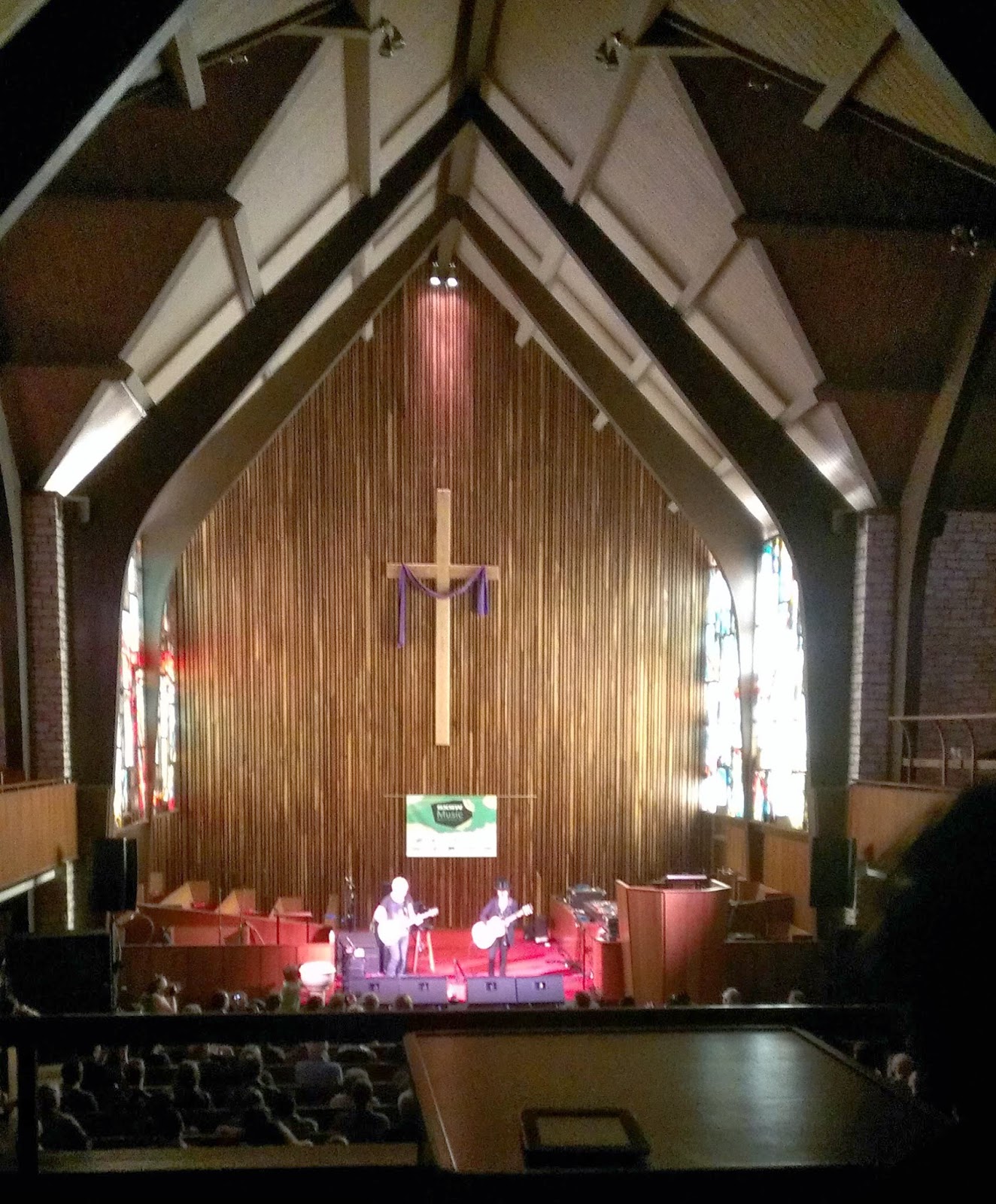 [Suzanne Vega with Gerry Leonard at Central Presbyterian Church. I promise it's them even if you can't discern them.]

Vega has a new album out and played several new songs from it, but she also played many of her hits from the past. Some of her new material dealing with Tarot is of minimal interest to me, but others were quite strong. A clear highlight was "I Never Wear White", which is probably fairly self-explanatory yet still impressed me. I recognized her acclaimed hit "Luka" as well as her originally a capella "Tom's Diner", performed here with textural, layered, and looped parts by Leonard. It was probably the best version of the song I'd heard. It was a great performance from start to finish, aided by the reverberant venue and the fact that Vega's set length was slightly longer than most others were (almost an hour).

My last stop of the night was Elysium, where I hoped to get in to see Gary Numan. The show started at 12:30, and I got there just after 11:30, but the lines had already begun. The problem was, badgeholders had first priority, and they kept walking up and getting let in. As soon as their line would go down, more would show up before the wristband line (which I was in) could move. I finally got lucky at some point around 12:15, just in time to catch about two minutes of a set by EMA. All I know was that they sounded synthy in an appealingly new wave/sci fi/darkwave way. I wish I had heard more, but that's about all I can report. And something tells me that most of the people in the third line, waiting to pay cash, probably didn't get in.

Just like last time I saw him, Gary Numan was at least fifteen minutes late getting on stage. In the meantime, I was practically doing battle to keep my hard-won spot with a good view. It was crowded and quite uncomfortable, and some sort of altercation broke out behind me at one point. But finally, Gary came out and started rocking, so it was all worth it. 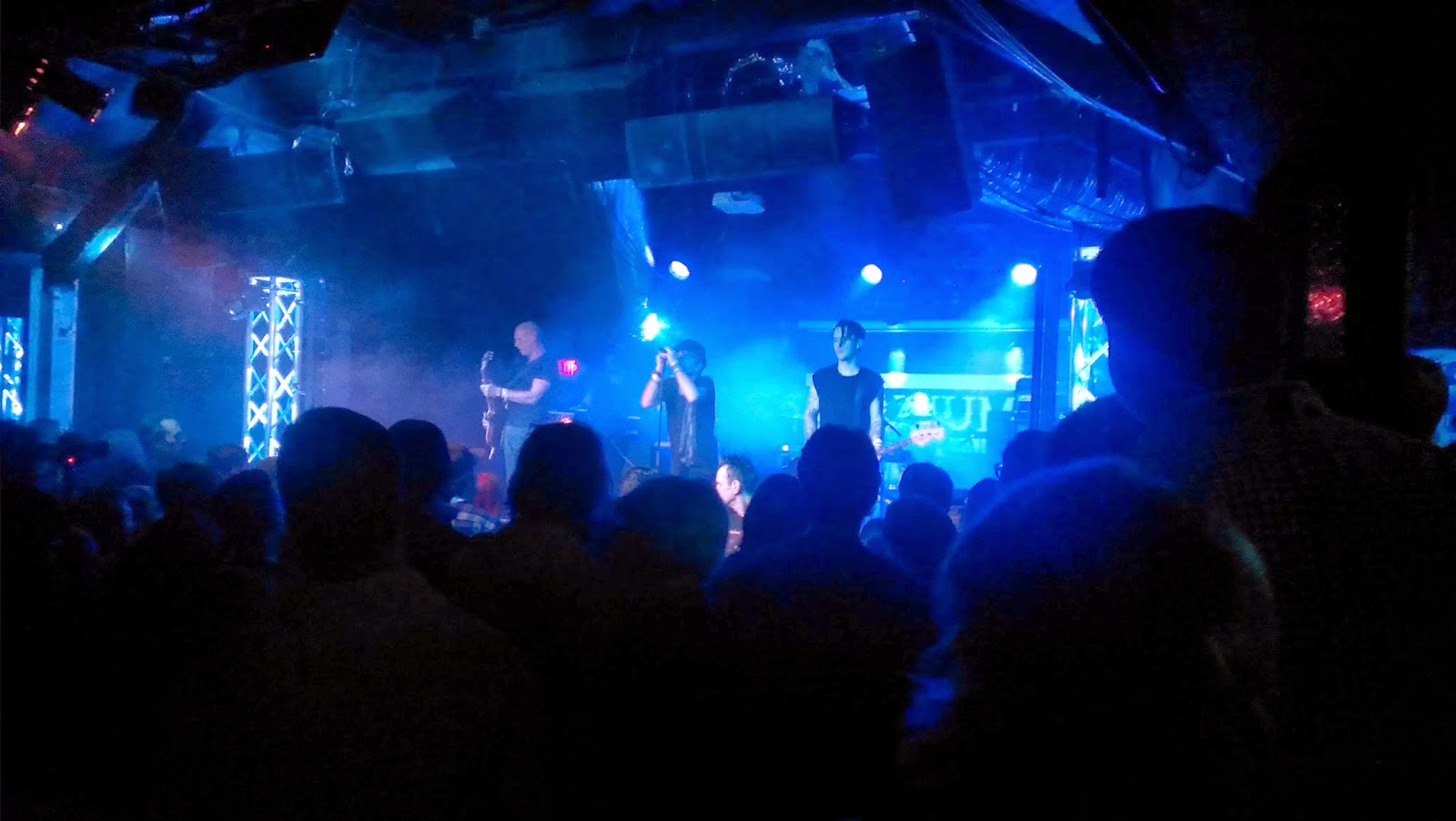 That's right, he even got to do an encore! This actually felt like a real set, even if it still was only barely longer than an hour. I don't think I need to repeat much that I said from his other SXSW performance that I saw, but I definitely appreciated that he got to play more songs. I think it also helped that a lot of the audience knew more of his catalog than just "Cars" – the atmosphere was much more conducive to Numan's material. (The fog machines probably helped, too.) He still relied on samples a little too much, and he again only touched his keyboard at the end of "Cars", and he again barely used his guitar, but otherwise it was quite an experience to behold. 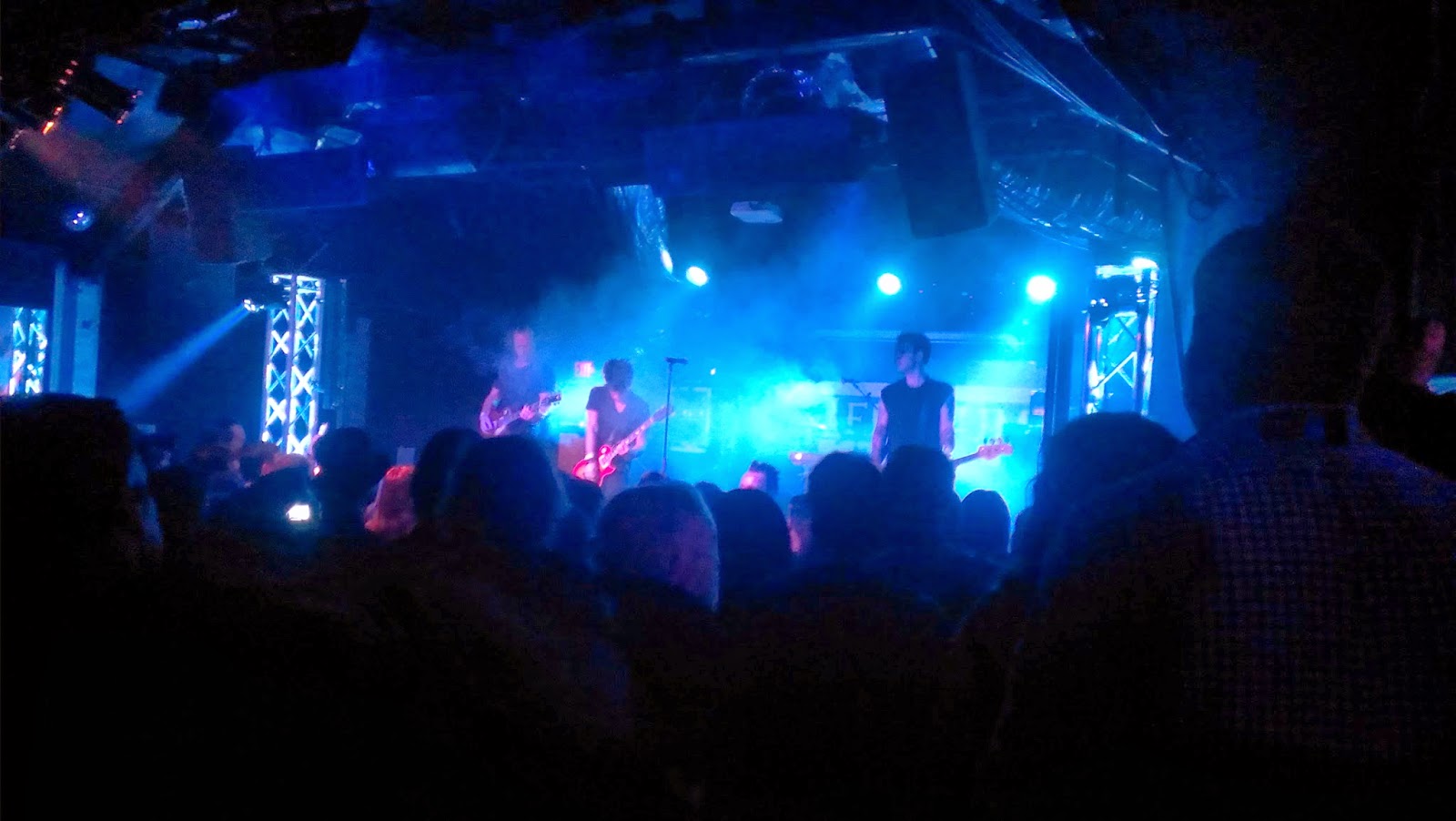 "Films" was a bit of a surprise, but it was quite welcome. "Down in the Park" is another classic, but, as with several of the songs, Numan has rearranged the song a bit, and it began with a long instrumental passage. "Are 'Friends' Electric" was probably the high point of the show, with the band in top form and an appreciative audience eating it up. And of course, the wonderfully punctuated "I Die: You Die" was another pleasant surprise, especially since I hadn't expected any sort of encore. This performance retained the signature keyboard parts (of course), but the guitar and live drums added a powerful edge to the song that I hadn't heard in it before.

Although I obviously enjoyed seeing Numan's brief appearance at Waterloo Records, this was clearly the real deal. He had also played at a few other places during SXSW, including two (!) other performances on the same day as this one. Somehow, the band didn't seem at all exhausted, and to the contrary, I think the more suitable environment brought out their best. Numan was particularly energetic and was quite thankful at the end. 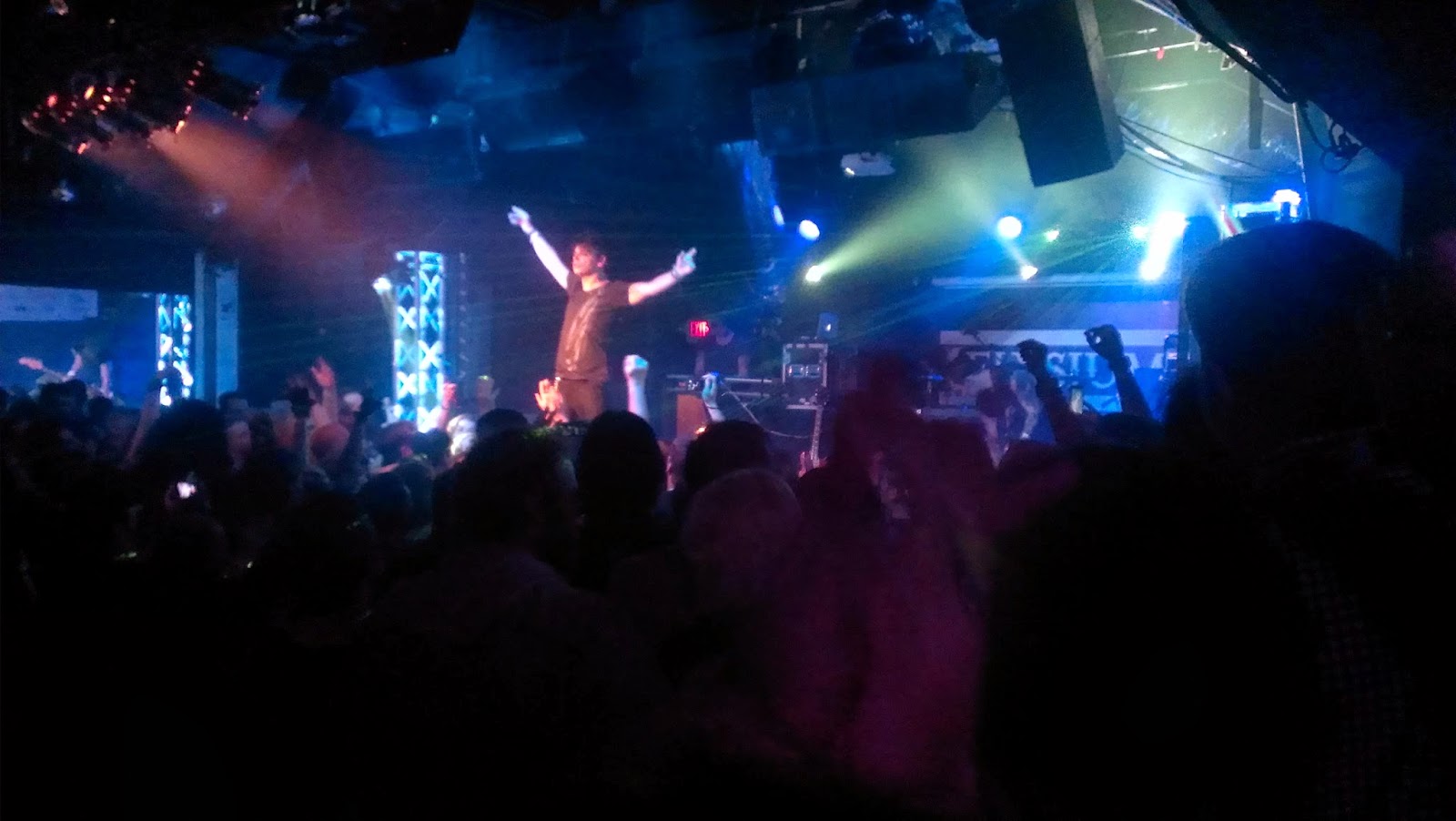 [Who enjoys this more, Numan or the audience?]