Introduction: After a late night of concertgoing from the night before, I took my time getting up and planning out my day. Unfortunately, I didn't do a great job of it, or at least at first. For some reason, I also didn't take many pictures, but I'll share what I have.

Kurt Vile (at Weather Up): After hearing his name a million times from places like Pitchfork, I decided it would be in my best interest to catch one of his many appearances at SXSW. I picked a free, unofficial, early afternoon showcase in East Austin. However, I didn't anticipate the line crawling along two blocks past the venue nor the blazing sun. (I had a half "snow" day the week before, so I wasn't prepared for Spring yet.) He was playing outside, solo on an acoustic guitar, but the soundsystem was decent enough that I could hear him okay from the line, even if I couldn't really see him. By the time I got to the entrance gate, he was wrapping up, so I didn't even end up going in. I didn't think the performance was anything special, but it wasn't bad either. I'm not sure I got the best experience.

I then headed to the madness of Red River Street to try to see Hundred Waters at the Empire Garage (another free, unofficial showcase). Seeing another two-block line in the sun, I decided to forgo the sunburn and do something else. I wandered around 6th Street for a bit and then headed towards my next scheduled show, figuring the early arrival time might be necessary.

Once I got to Waterloo Records for yet another free, unofficial showcase, I realized there was no line at all. (Of course.) There were plenty of people, but plenty of space, and as it was a dozen blocks or so from the epicenter of SXSW, I guess fewer people were wandering in from the streets. I caught the end of a set by Charli XCX, an all-woman power pop type outfit. They were playing "I Want Candy" when I walked up, which did not endear me to them.

Next on the bill was Gary Numan, perhaps a little bit of a divergence from the preceding act. Frustratingly, he was at least fifteen minutes late and only played five songs. At least the performances were strong, even if he does rely on more samples than I wish he did. I think his (relatively) recent change of look and sound to an explicitly darker, gothier, more industrial direction has worked in his favor, even if his band just barely overdoes the brooding, all-in-black aesthetic. However, Numan himself smiled and showed sincere gratitude at the end of each song. Here's the setlist:
1. I Am Dust
2. Metal (with M.E. outro tease)
3. Love Hurt Bleed
4. Cars
5. A Prayer for the Unborn 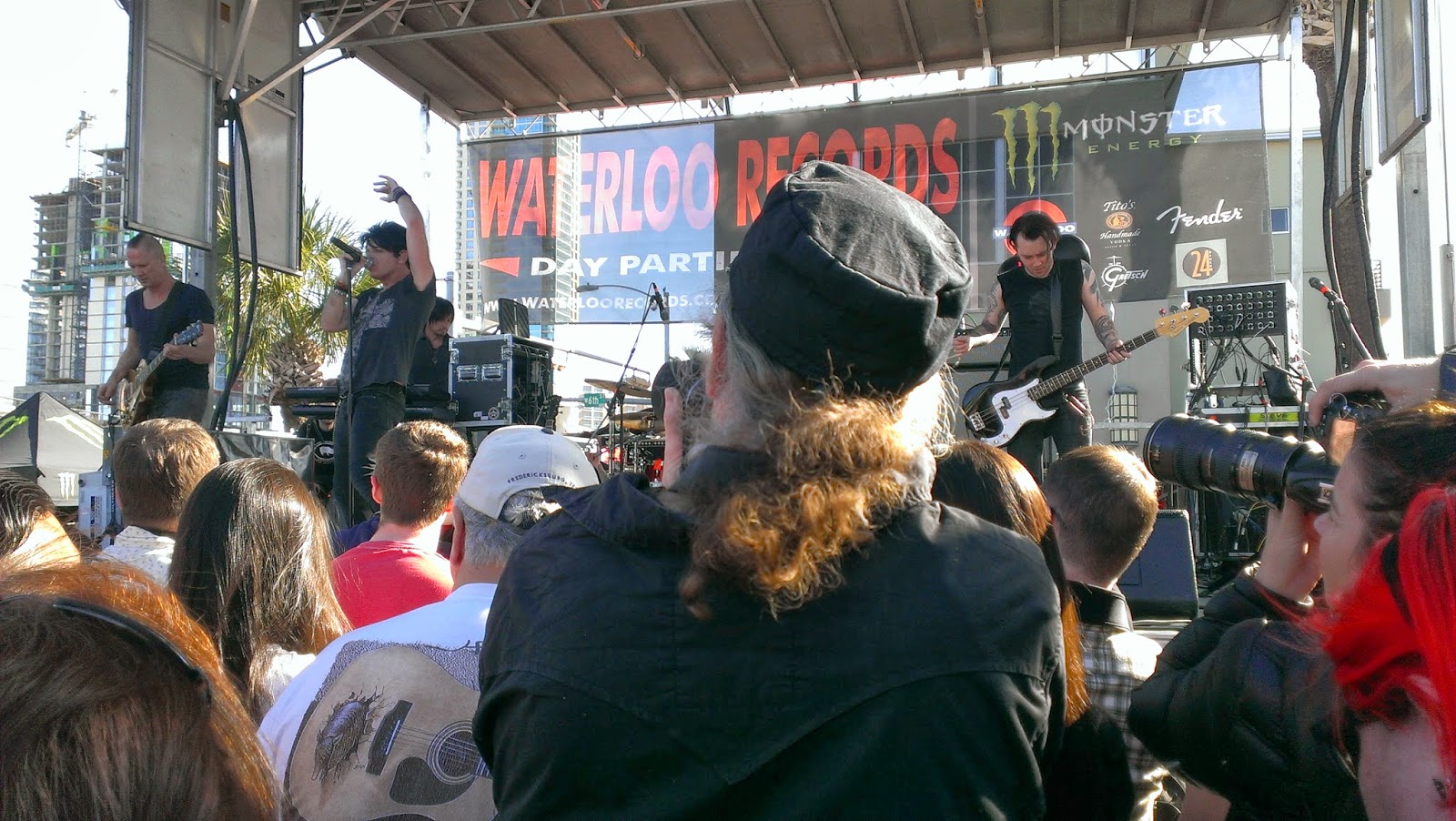 Of course he played "Cars"; it was the only song most of audience recognized. It was also the only song Numan got behind a keyboard for, but only for the whirly bit at the end. Otherwise, he just sang and played a little guitar. I was pleasantly surprised to hear Numan give a nod to Nine Inch Nails by including a tease of the synth part from "M.E." at the end of "Metal", just as NIN did for their cover from Things Falling Apart.

After that, I ran across town back to the East Side to eat dinner and then get to Hotel Vegas as the official showcases began. I had to wait in line, but my wristband at least sped up the process for me. I missed the first few minutes but managed to get inside in time to catch most of a fantastic set by Electric Eye, hailing from Bergen, Norway. They set down really nice psychedelic grooves rooted in classic synth tones and carefully crafted drumming. The bass parts were mostly rather repetitive but felt just right. The guitar was actually a twelve-string, frequently played with a slide. The total sound was huge, especially considering that it was just four musicians. I asked them if they had an album out, and they directed me to a friend/publicist, who very kindly gave me their debut album, Pick-Up, Lift-Off, Space, Time. (It's quite good and just about lives up to the live show.)


Then I charged back to 6th Street to get to the Parish. I saw the end of a set by Vertical Scratchers, who were playing a rather inauspicious brand of pop rock. My real goal was to see Saint Rich, who had blown me away when I saw them at a Fun Fun Fun Fest aftershow. I had purchased their album and I was and am impressed by the combination of folk stylings, tastefully skillful guitarwork, and good lyrics. Seeing them live a second time, they mostly showed the same strengths as before, but this performance was almost assuredly slightly superior (and I already gave their last Austin appearance an A!). The guitarist (Steve Marion of Delicate Steve) makes it look like playing perfect guitar parts is as easy as walking down the street. (Dare I say he has a Johnny Marr vibe?)

The band seemed to be having a little more fun than last time, perhaps showing a bit more confidence. They started messing around during "Dreams", at one point asking the audience for a number of beats to play a note in series. They tried 37, but the third guitarist hit an extra one, so they tried again with 45 and did it right.

I was feeling pretty worn down by this point, as it was 9:30 and it had already been a long day. I had one more band I knew I wanted to see, and I decided to forsake all other options to make sure nothing got in my way of seeing Boogarins at 11:00 at Red 7. Kurt Vile was playing another set at 10:00, but it was at a venue that would have required another bikeride through the hordes and the risk of missing my top choice of the night. Gary Numan was also playing another set at 11:00, followed up at the same venue by Blondie at midnight, but since I'd just seen the former and recently the latter as well, I decided I had to prioritize.

So I simply walked to Red 7 to see whoever was there. Right when I came in, I caught the closing a capella song of who I think was Jonny Fritz. Hard to say much, but I liked the couple minutes I heard. Since Red 7 has two stages, one indoor and one outdoor, I went outside and heard a few songs by Touché Amoré, a (post-?)hardcore band with plenty of fans in attendance. While that really isn't my style of music, I was amused by the non-stop stream of stage-divers, and I appreciated some of the singer's sentiments. After that, I went back inside and caught a few songs by some sort of country band. I didn't catch the name, but the official schedule listed Robert Ellis. He and his band mostly stuck to fairly conventional country rock sounds, but periodically they would suddenly flip into some strange alternate universe and you'd realize they were playing something akin to prog or experimental psych music. Then they'd flip right back as if nothing had changed. It was quite odd and very intriguing. I now regret that I hadn't stuck around for more.

Instead, I went back outside to see Tijuana Panthers. At face value, they're some kind of modern surf rock band, maybe with some rockabilly roots. Actually, I'm not sure why I wanted to see them at all, since those genres usually don't yield a lot of fruit for me. But anyway, I did. I was impressed that all three members sang (sometimes in pleasant harmony), and that the basswork was good, but the guitar and drums weren't very notable. Some of the lyrics were clever, some were banal. Overall, I couldn't really get into it, but I admit their sound was a little above average.

Finally it was time for Boogarins, a Brazilian psychedelic band with a rather sunny sound. Their live sound was heavier than on record, but it worked quite well. It was a fun show with good grooves and a nice spacey sound. I thought both core members were excellent – one was the lead singer and rhythm guitarist, the other lead guitarist and backing vocalist, and both blew me away with their effortless skill. I wasn't feeling great by this point, but I still dug the jams enough that I bought their debut album afterwards. (It's quite good, but just a little short. It also has a somewhat different feel than the live show, as mentioned above.) 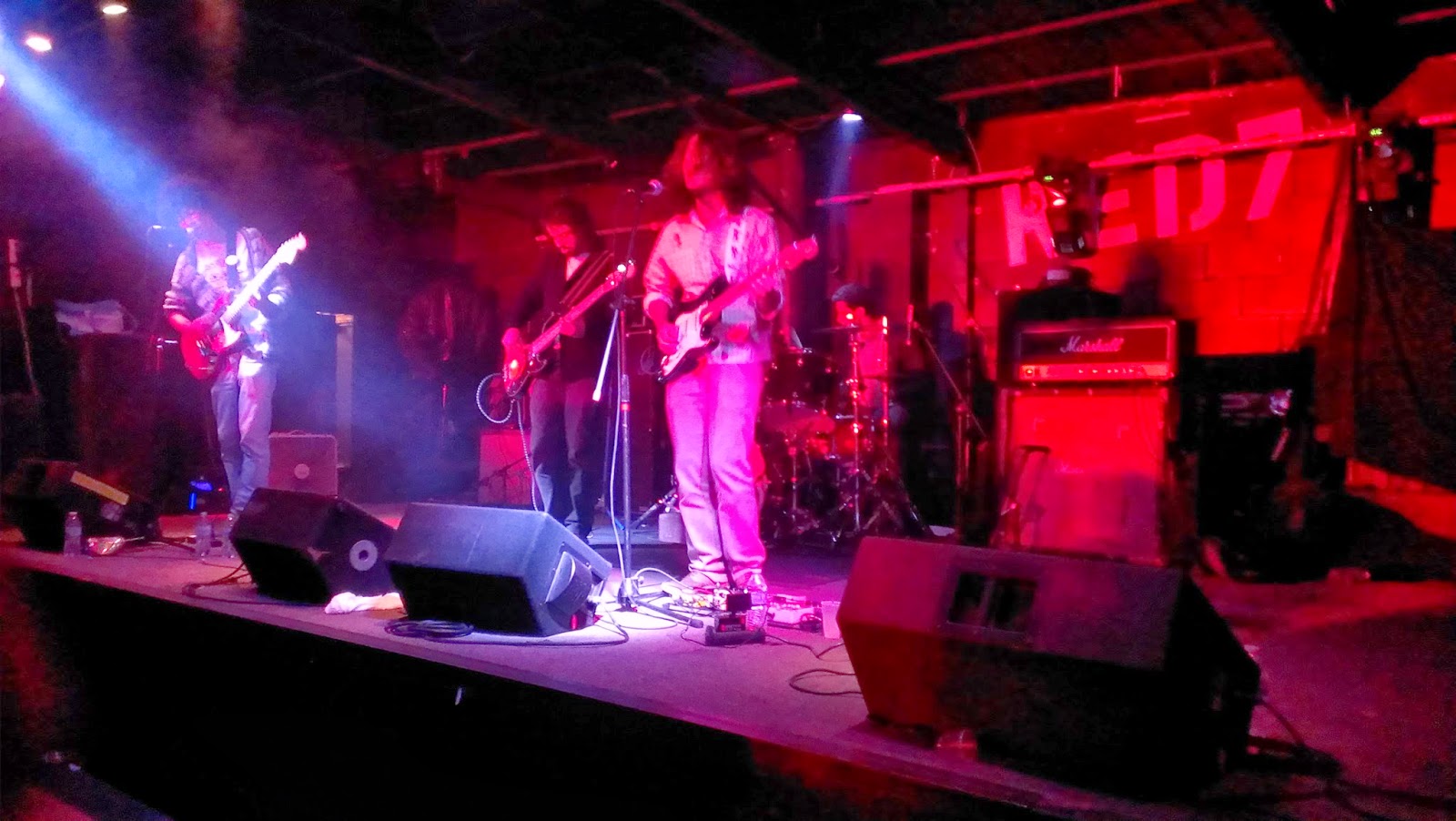 And at that point I decided I needed some rest.

Final Thoughts: I didn't see enough of Jonny Fritz to be able to make an evaluation, and I wouldn't hesitate to admit that my scores for Kurt Vile, Charli XCX, Vertical Scratchers, and Robert Ellis are rather tentative.
Posted by Patti at 4:35 AM