Introduction: After an exhausting long Day #3, I decided to plan my next day even more carefully – and also take it down a notch. Thankfully, I had an easier time getting around and getting in my desired venues.

Initially, I was hoping to see Mutual Benefit a second time at a better venue (Red 7), but I was slow getting ready and realized it probably wasn't going to happen. It was a 1:30 show, so on the off-chance that there wouldn't be a line, I still checked it out, but of course, as was beginning to seem the norm for the free, unofficial shows in the SXSW core area, there was a line even at that time. So I instead moved along to my next destination.

I got to Ginger Man, just barely out of the way of the center of the action, and of course, there was no line. I walked right in and saw a few songs by The Defibulators (sic). They played a country/bluegrass blend, complete with washboard. They had some clever lyrics, but for the most part, I wasn't in to it. After them came Sister Sparrow & the Dirty Birds, a hornsy, bluesy rock band with a powerful lead vocalist. I liked the idea, and the dedicated harmonica player, but I didn't actually think they were very good. The singer, despite the strong voice, wasn't doing it for me (in lyric or in style), and the music just wasn't very adventurous.

Finally, my patience paid off and David J hit the stage. I couldn't resist seeing him twice. (He actually played a third set on Sunday at Joe's Crab Shack, but I don't think I could enter the premises on principle.) As was to be expected, he played a very similar show to the one two days before at Valhalla. He did make one small change to the setlist, though, as you may observe:

In case you don't feel like cross-comparing yourself, I'll just tell you the change: he dropped "Everybody Wants to Go to Heaven" from the end and instead opened with "I'll Be Your Chauffeur", his lone solo #1 hit (on the then-recently created US Modern Rock chart). Beyond that change, the two shows were quite similar, and thus I will mostly expound the differences instead of repeating the commonalities. 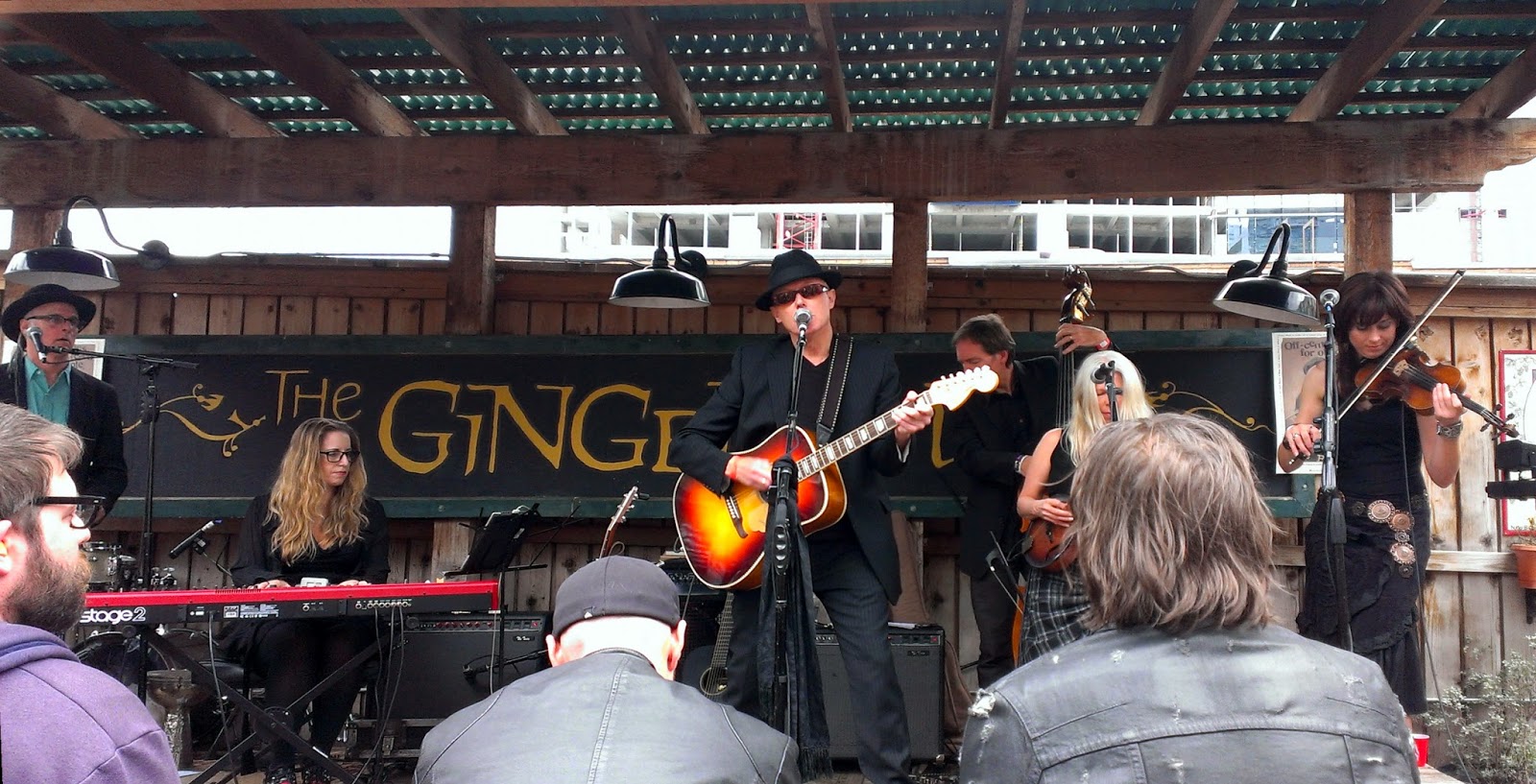 I suspect that David's setlist change was an attempt to aim for a higher chance of recognition from a crowd that probably barely, if it all, knew who he was. While the crowd at Valhalla was thin, those that remained were almost certainly longtime fans; who else would stick around until after 1am to hear some arbitrary eccentric singer-songwriter and his pseudo-country band? At Ginger Man, at 3:15 in the afternoon, I suspect most of the patrons were there for the more conventional country/rock bands (or the delicious and wide array of beers on tap). I could be wrong, but other than myself and the handful of goths in the crowd that I recognized from Valhalla, I think most members of the crowd were not there specifically to see David J.

As such, I think David was just a little more uncomfortable, a little less at ease. He seemed more at home in a place like Valhalla, and I think his stage banter and performance were slightly more relaxed and better there. His performance at Ginger Man was also good, but just not quite as solid. However, because it was daytime, I got better pictures! Also, someone was filming both shows with a handycam, and in answer to my request from my review of the other show, the complete footage of this show has been posted online! (Sadly, you won't get to hear "Heaven" and the line change about "the girl who works at Whole Foods", but so it goes.)

Instead of heading to the alley to try to bug on him again, I decided to move on after that. (Besides, I'd happened to catch him when he got in the bar and I'd already said hello then.) I hit off to the East Side for another unofficial showcase. It ended up being at the Owl, a small, low-key DIY space a little off the beaten path. I walked right in and caught maybe ten minutes of Pure Bathing Culture. They were playing a dancey synth/guitar rock thing, and while it was a little sample-heavy, it seemed interesting and bore some promise.

However, I was really at the Owl to see Hundred Waters. Thankfully, unlike my last attempt, this time I was not deterred. But of course things weren't so simple. Despite the 5:30pm showtime, they were running late due to a very complicated setup and problems with their sound. The house engineer did his best but reported that the venue was improperly grounded and thus there was a rather loud electrical hum inherent in the system. The band were frustrated, and when the singer finally took the mic, she asked the audience if we could hear it. We said "yes", to which she said, "You were supposed to say no!" Someone suggested that it was just bees. At any rate, about 20 minutes late, they finally began. Here's the setlist, as best as I could fill it in: 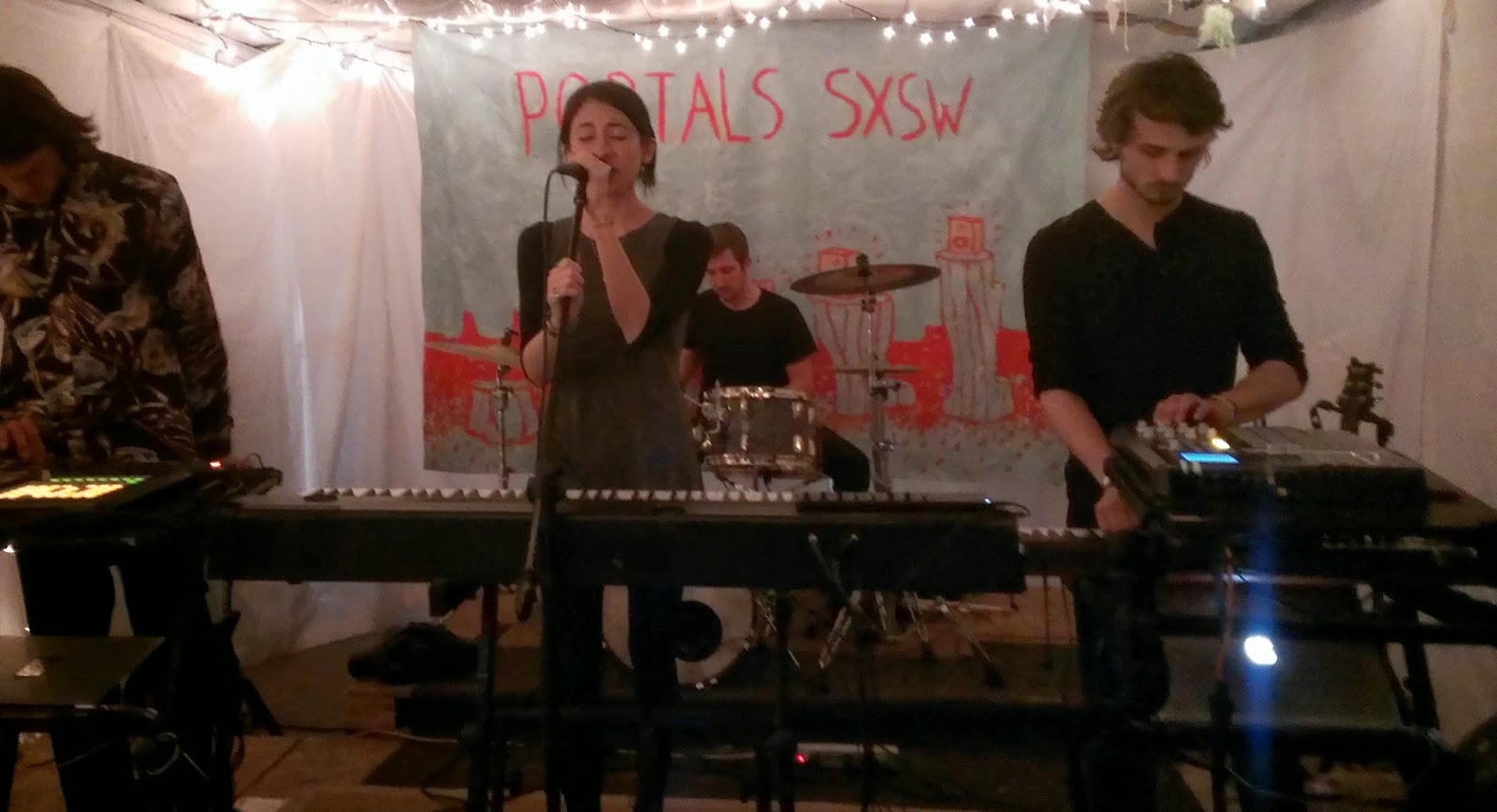 [Hundred Waters at the Owl.]

Yes, one of the songs performed was announced as a remix (I didn't catch by whom). I wondered a moment what that meant. But even if the band relies mostly on MIDI controllers and synths, I suppose there is no reason they can't choose to restructure and reorganize one of their songs. In fact, that sounds like something I would generally encourage live performers to do. And indeed, I enjoyed the result. Actually, I enjoyed the whole show quite well, even with the annoying hum and the delayed start. Live, the band shows a little less of their folk influence, and instead the electronic sound dominates. However, not everything was synthesized (such as most of the drums, as well as some bass and guitar during "Are/Or"), and you shouldn't get the idea that this is some sort of electro-dance or trip-hop band. Many songs employ unusual time signatures or syncopated beats, and the vocals are decidedly unusual. I like the nonstandard approach they have chosen; I think there is beauty to explore there that few other bands are interested in.

After a break for dinner, I biked back to the Rainey Street area just fast enough to see most of a set by Dråpe, a sort of dream pop band from Oslo, Norway. I hadn't specifically planned on seeing two Norwegian bands at separate nights of SXSW, but they both happened to draw my interest and fit my schedule, so that's how it worked out. (I recognized the members of Electric Eye at the show and said hello to their publicist/friend again.) While Dråpe was definitely floaty, dreamy, and maybe even a little spacey, they weren't nearly as psychedelic or prone to drone. The songs were more conventionally structured and less experimental. While I liked the instrumental work, and I thought the band could rock rather well, nothing stood out strong enough for me to call the music great. But it was good.

I then decided to head to Congress Avenue to see Imarhan Timbuktu (supposedly "Those Who Love Timbuktu") at the Speakeasy. The band, mostly comprised of a set of Tuareg siblings, come from Mali and speak more French than English. However, a few members of the band apparently had visa troubles and were unable to make it into the country for the show. To make up the difference, Sihasin, the Najavo bass-and-percussion duo I'd seen a few nights before, stepped in to back the available members. It made for quite a unique cross-cultural experience. 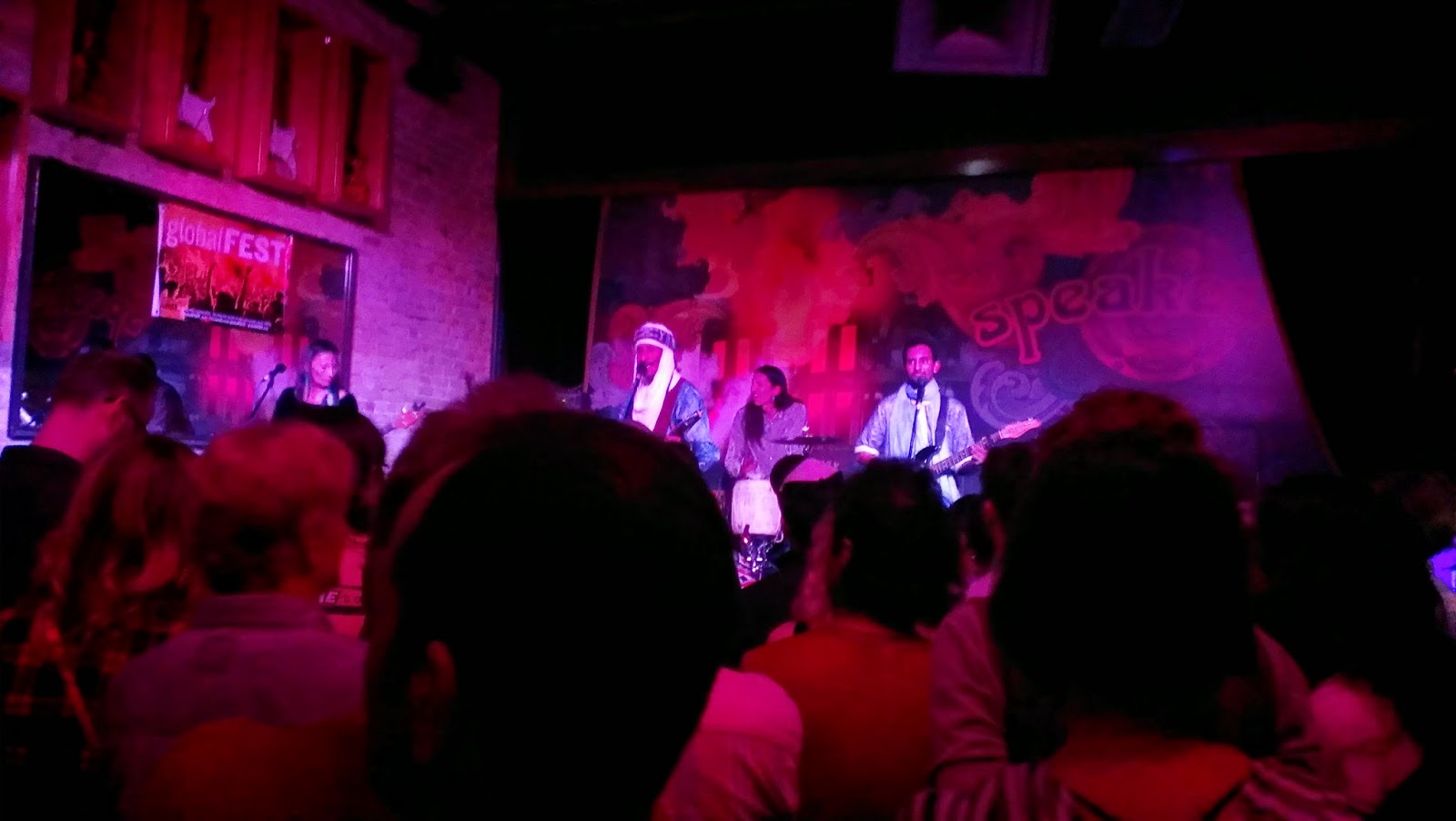 [Imarhan Timbuktu with Sihasin at Speakeasy.]

The bandleader and his younger brother both played electric guitar, but while the younger brother played very simple but highly rhythmic parts (never more than two chords!), the older played fluid riffs that dwelt somewhere between rhythm and lead. Both guitarists played with no distortion and no effects. (Quite a departure from most contemporary electric guitarists!) It was an impressive style; it seemed partially improvised and partially carefully planned. The older brother did most of the singing, but the younger joined in on choruses. Their sister played a hand drum (she was the one that had previously sat in with Sihasin) and also occasionally sang in the choruses; she would also wield powerful trills at seemingly arbitrary points during instrumental sections. Sihasin mostly kept to the back, filling in the arrangement but sticking close to the chords and beats set down by the primary members.

The music wasn't particularly dynamic, but it was captivating nonetheless. The overwhelming feel was that of a drone or a raga, which probably fit in surprisingly well with all the psych bands at SXSW! The highlight was certainly the lead guitar, which wrapped around the groovy syncopated rhythms and wielded an odd strength despite the clean tone.

Final Thoughts: I had debated seeing Hundred Waters again at the Central Presbyterian Church, but it was the same time as Imarhan and I thought it would be best to diversify. I probably wouldn't have gotten the view I got at the Owl, but something tells me the sound would have been far better in the more reverberant (and probably better grounded) space. Either way, I was too worn down after four days of non-stop action to see anything after Imarhan, so I just went home. There were certainly more bands that I was interested in (Quilt, Temples, Dum Dum Girls, Dosh, etc.) but I just couldn't do it.
Posted by Patti at 4:23 AM