Introduction: I worked during the day, but managed to get out and see a few bands in the evening before it got too late. I also met up with a friend midway through, so I prioritized socializing over trying to squeeze showcases into every spare minute.

Talk in Tongues (at Cheer Up Charlie's): I love this venue so much that I couldn't resist the opportunity to start my evening there. Thankfully, I had a reasonably good excuse in the form of this shoegazer quintet. They opened with a Ride-style song with great three-part vocals, but no other song quite lived up to that level. In fact, their vocals were usually quite difficult to understand. On the other hand, their musicianship was great – when they felt like bringing it. Some songs got lost in a vague haze, but they really rocked when they broke out into something bigger. Their bassist put down some good grooves that helped keep them afloat. 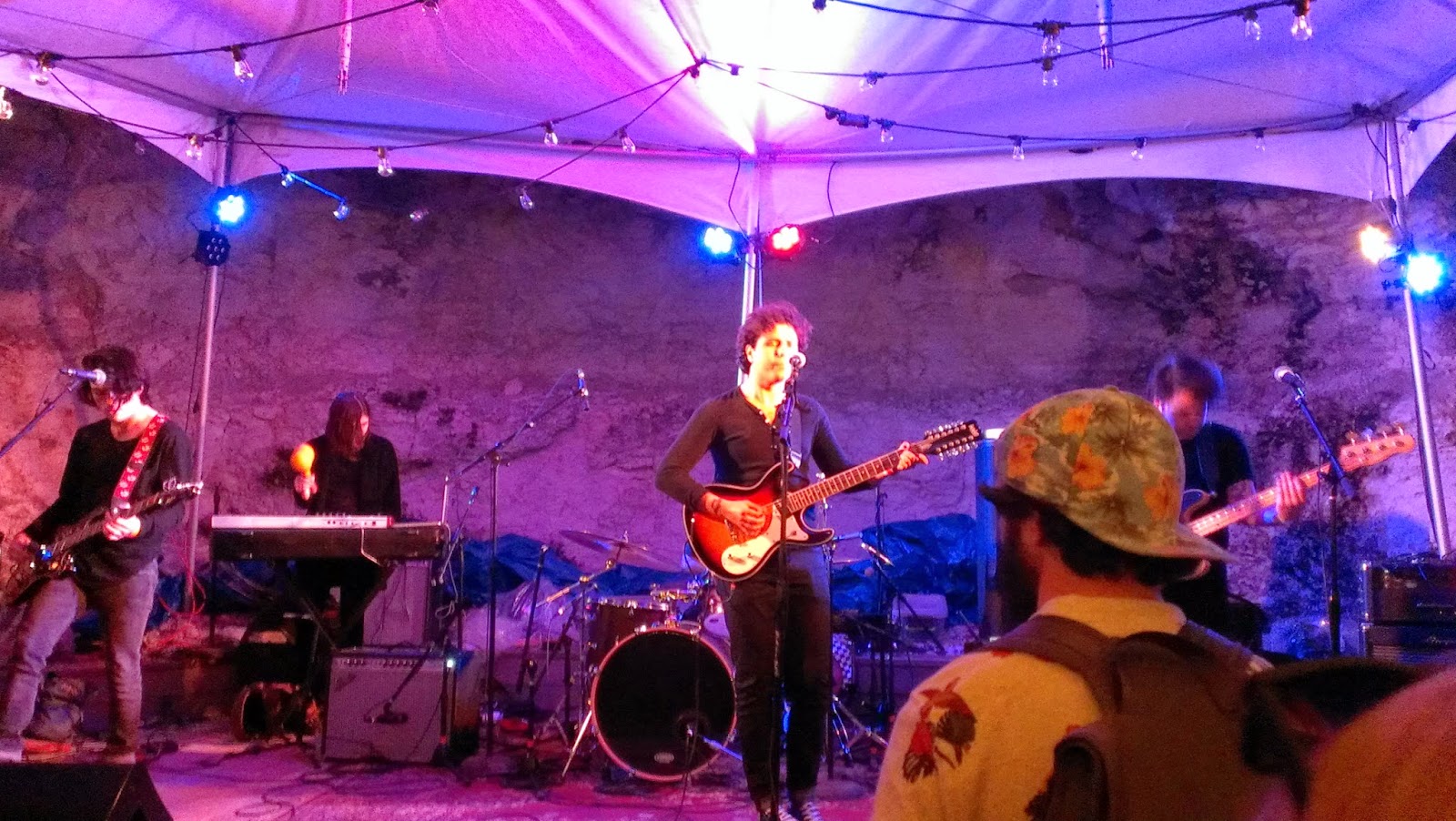 [Talk in Tongues at Cheer Up Charlie's.]

Mai Dhai (at the Victorian Room at the Driskill Hotel): Somehow this moderately-sized event space at the oldest and most prestigious hotel in Austin was home to a Pakistani showcase on this evening. I couldn't tell you much about Mai Dhai other than that she sings traditional songs and plays a hand drum along with two additional hand drummers and a hand-pumped harmonium player. The four musicians wore elaborate dress and serious expressions. I found myself rather hypnotized by the complex beats, and amazed that the percussionists would throw in a sudden accent or alternate part in simultaneous coordination with no apparent warning or signal. Although the spoken language was obviously not one I could understand, I also felt that there was a rhythmic or melodic language that was outside of my awareness. Mai Dhai's vocal and the pump organ followed melodies that I found unpredictable and unrestrained by patterns that I was familiar with. I was fascinated initially, but I'll admit I gradually began to find the wandering lines of music a little droning and repetitive. 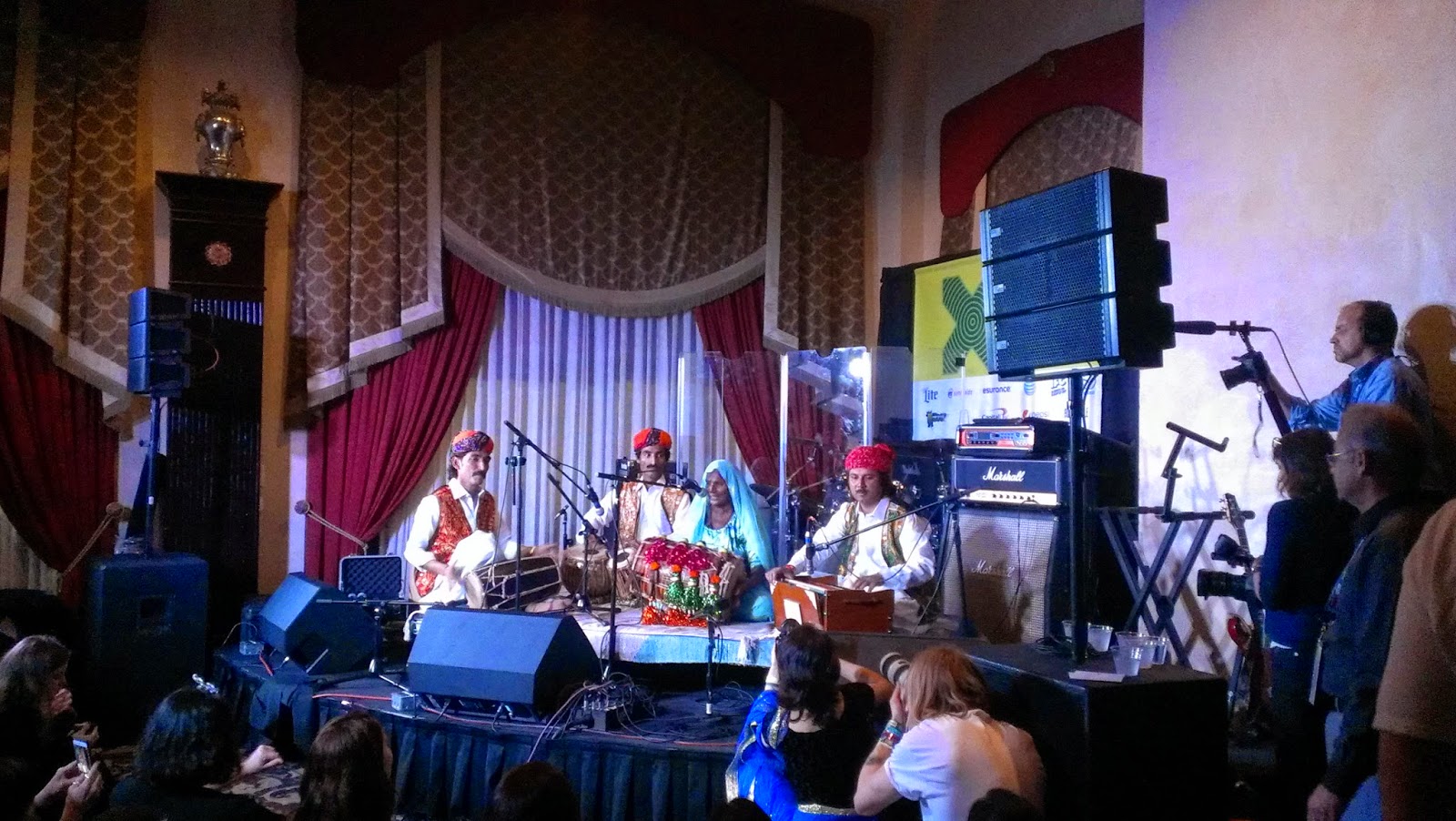 Mother Falcon (at Bethel Hall at St. David's Episcopal Church): The local Austin band performed as a twelve-piece in a modern church hall. It was hard to keep track of who was playing what, as the band's members all play multiple instruments and many members share the microphones. In fact, I'm not even sure I know the names of all the instruments they played! Apart from the standard array of classical and electric rock instruments, I believe there was also a bouzouki. Most or all of the members struck me as trained musicians, i.e. music school students or graduates. I guess this is a sort of classical ensemble, but there was a clear indie rock influence. They struck me as more like post-rock (if that term wasn't already taken for something else), post-indie, post-classical... post-something. I think the difficulty of attaching a label and their talent at arranging complex and diverse material meant that it was a very fun and compelling show to watch. They might take themselves a little too seriously, but at least they were able to joke about that fact.

[Mother Falcon at St. David's Bethel Hall. Apologies for the blurry shot. Note that the drummer is not visible.]

At this point I took a break and met up with my friend. We went to Stubb's and caught the last few minutes of a set by Stromae, a Belgian pop star. It didn't seem up my alley, but his vocals sounded great. What we were really there for, though, was TV on the Radio. I've wanted to see them for a long, long time. Back in 2004, when they toured with The Faint and Beep Beep, I was excited to see them in Lawrence, Kansas. But for some reason, on that one night of the tour, only Beep Beep opened. TV on the Radio wasn't on the bill. I still don't know what the story was. At any rate, now that they are big and famous, I finally got my chance to see them. Someone even already put the setlist online:

Unlike most SXSW showcases, TVOTR got a full hour to perform, and they made full use of it. The four primary members were augmented by two touring members, meaning there was quite a bit of space for instrumental complexity. However, I was surprised at how rhythmically uncomplex the music was. They really focused more on atmosphere and vocals. While vocal work was strong, and I really like the very different sound of their multiple vocalists, the atmospheres were a more mixed bag: sometimes great, but sometimes dull. Too many songs felt static and stuck in one place. Often, though, the occasional little touches and punctuation of lead guitar, keyboards, and trombone helped make it interesting. 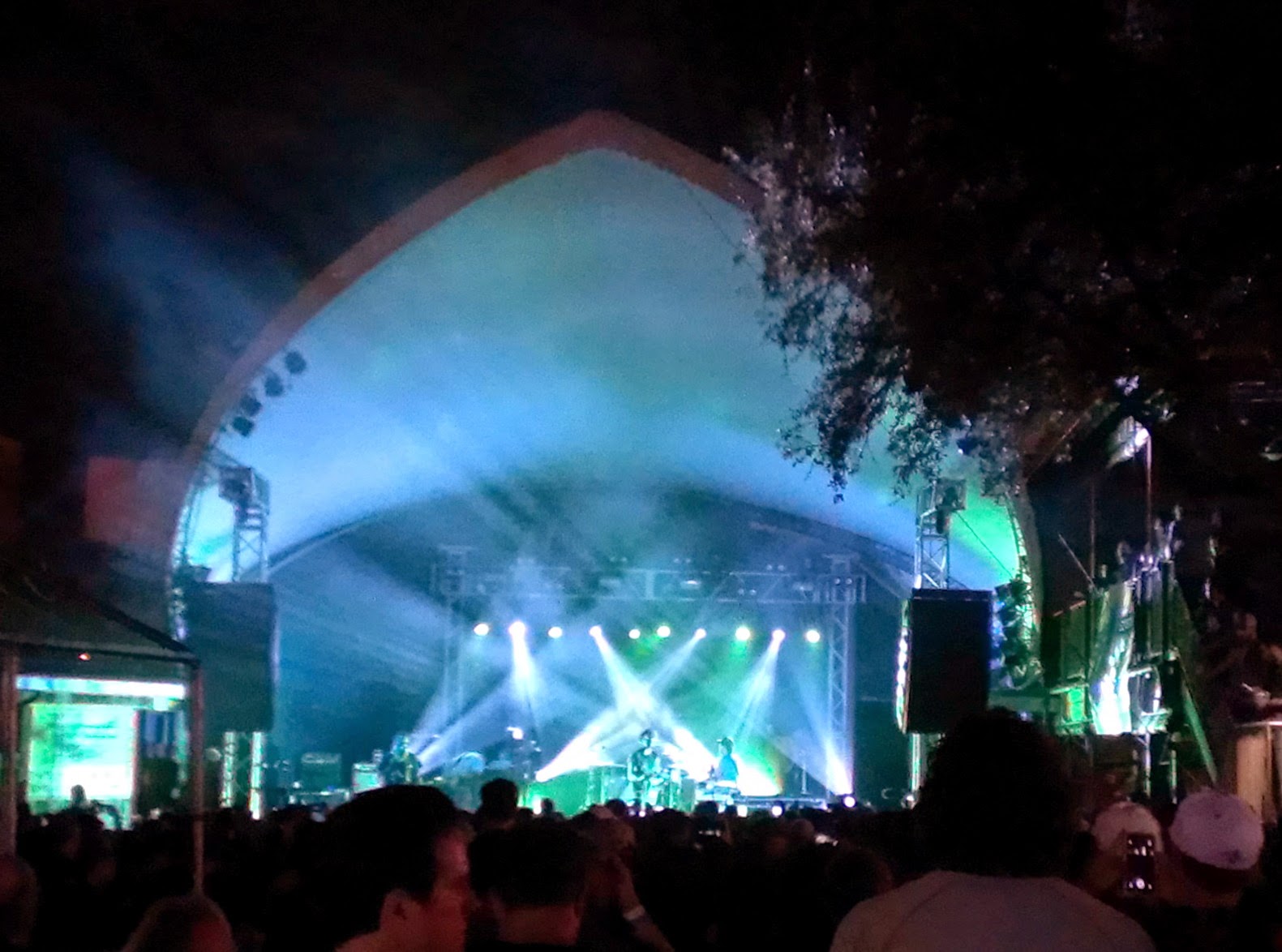