Introduction: I'm going to split this day into two parts for two reasons. First, it was a very long day, and second, I spent it all at two events/venues that nicely divide the day into two halves. The first part of the day, i.e. all afternoon, I spent at Pitchfork's day party at the Mohawk. Say what you will about Pitchfork (and there is plenty to be said!), they get some things right, and one of them was their lineup for this event. I couldn't resist, especially since I rather like the venue.

When I first showed up about fifteen minutes before the first band hit the stage, the line wrapped around about two blocks. I modestly walked to the end and resolved to just suffer through it. After my failures last year involving waiting in long lines for day parties (see here and here), I decided to just be patient and deal with it. I figured it was earlier in the day than when I'd tried getting into unofficial events last year, and the doors had only just opened. Thankfully, my patience was rewarded: I made it in just after the bands started playing.

First up for me was Hundred Waters on the outside stage. Yes, I saw them last year at SXSW, but since I've missed them on two other occasions, I really wanted to see them again. Here's their setlist:

While I was disappointed that they didn't play anything off of their debut album, they mostly picked the best songs off their second album, The Moon Rang Like a Bell, and they even managed to take the worst song on the album, "[Animal]", and make it way better. Trayer Tryon's live bass made a big difference, and they quite successfully brought the song to a big crescendo to close their set. I wish they'd use more live (i.e. non-electronic) instrumentation like that, as it was the blend of acoustic and electronic that first drew my attention to the group. Nonetheless, the live drumming is great, and the music noticeably improved whenever Nicole Miglis played keyboard parts. It was amazing to watch her play tricky parts without even looking. She took "Show Me Love", previously an a capella song, and accompanied it with a beautiful, cascading piano part. (A similar version appears on their new remix album.) "Down from the Rafters" was also performed in a rearranged manner, mixing up the sections of the song and adding several new sounds. I think the band's willingness to continually grow their songs and their sound makes them stand out all the more. 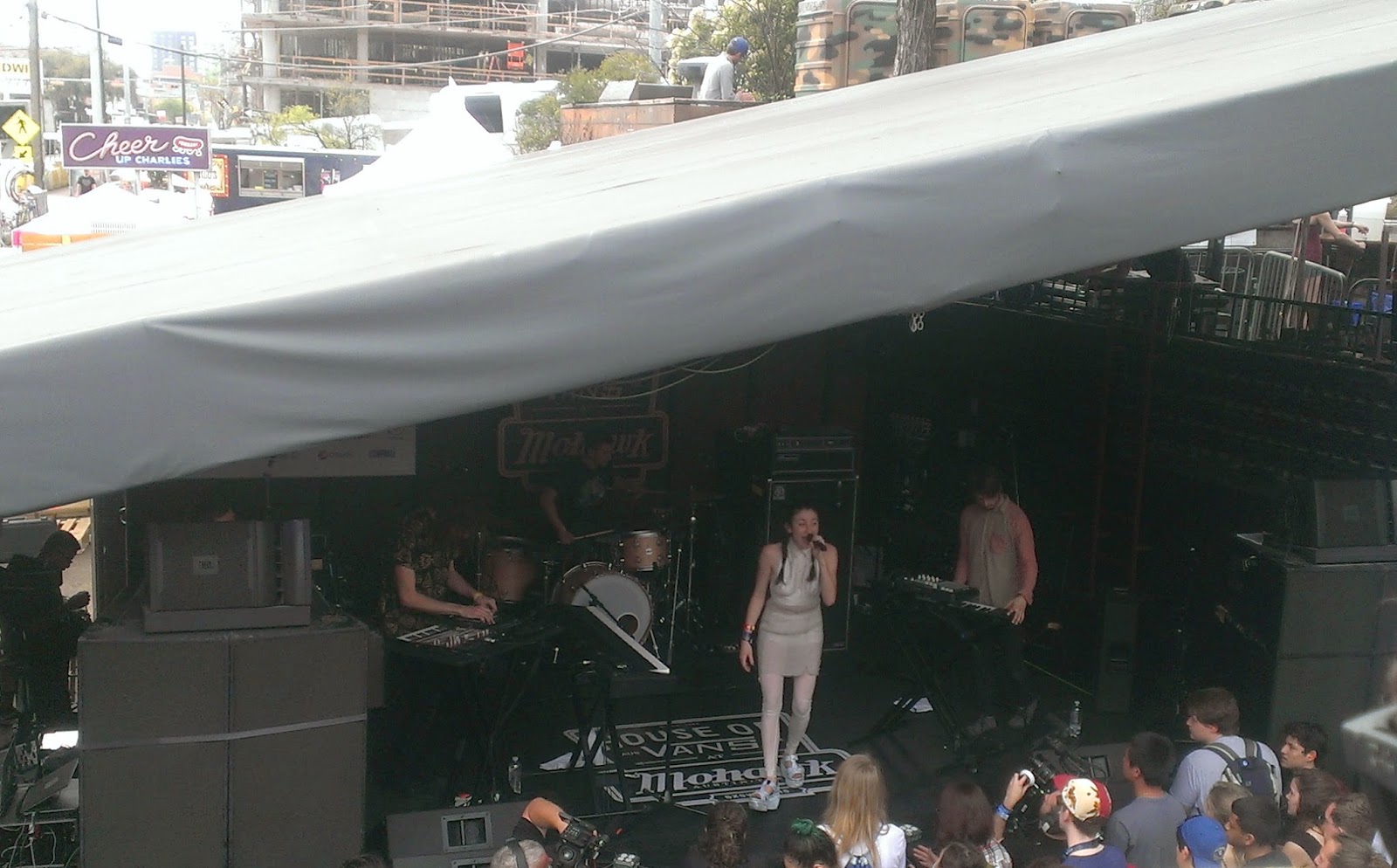 Next up was Alvvays on the outside stage. I don't know where this band came from, but they seem to already have quite a following. I thought their music was pleasant but a little lightweight. They have good pop hooks married to a basic indie rock sound, and they seem to have an aversion to abrasion. They just let the music flow along. It was enjoyable even if not transcendent. Their setlist has been posted online: 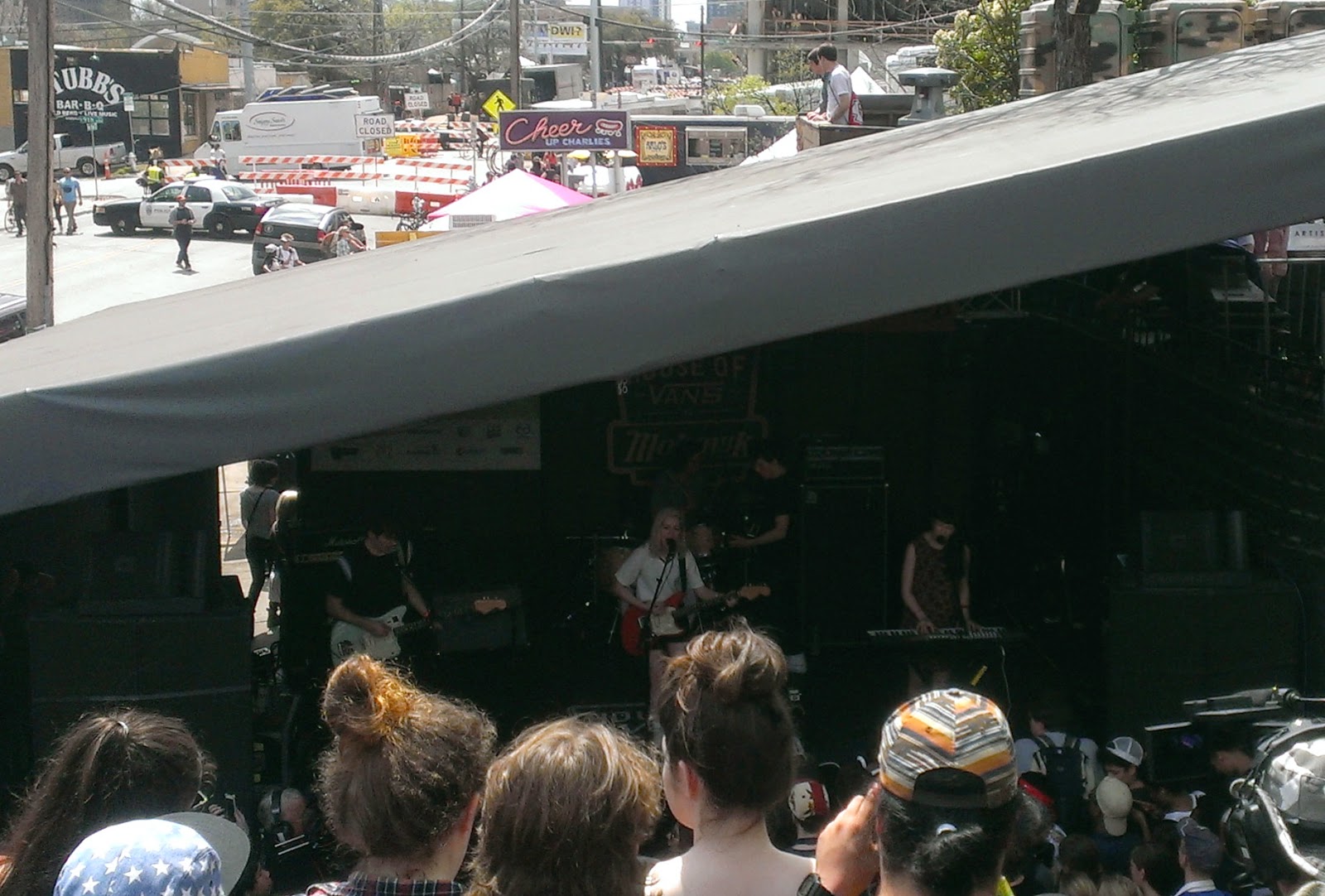 Then came Will Butler of Arcade Fire on the outside stage. He brings a lot of enthusiasm and energy, but not a lot of nuance, which is a bit ironic considering his role as a multi-instrumentalist and embellisher in Arcade Fire. The big surprise was that his lyrics are pretty good – which you wouldn't know from his main project, since the words are usually dominated by his brother Win and Win's partner Régine Chassagne. Will's vocals might be merely decent, but they were enhanced by a crew of three women singers, two of which also contributed keyboards. The result was something of a classic 50s/60s rock 'n' roll rave-up style. Every song was upbeat! The downside to this style was a tendency to take one hook and abuse it just past the line of being annoying. His setlist is available online: 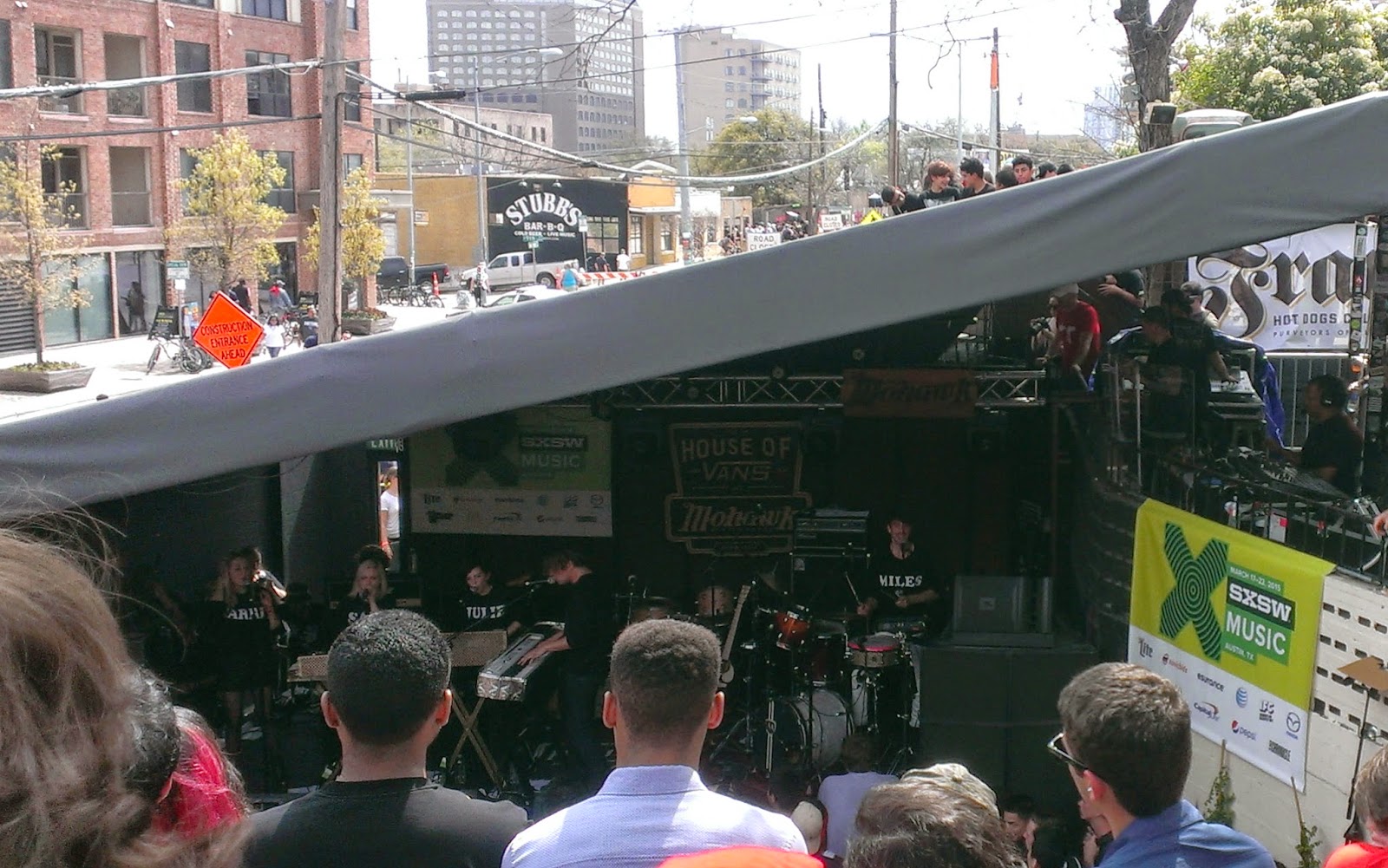 [Will Butler at Mohawk.]

Fourth on the outside stage was Title Fight. I had a hard time figuring them out. I'd heard that they were a hardcore band experimenting with shoegaze, but in concert they leaned heavily on the hardcore/emo/punk side and only barely dipped into the shoegaze side. When they did venture out, it worked, and they might one day find some interesting ground there. But most of the time, they kept to a generic, thrashy, intense corner of sound. Highlights were the introduction to the second song ("This is another song about foliage") and the guitarist's Siouxsie shirt. 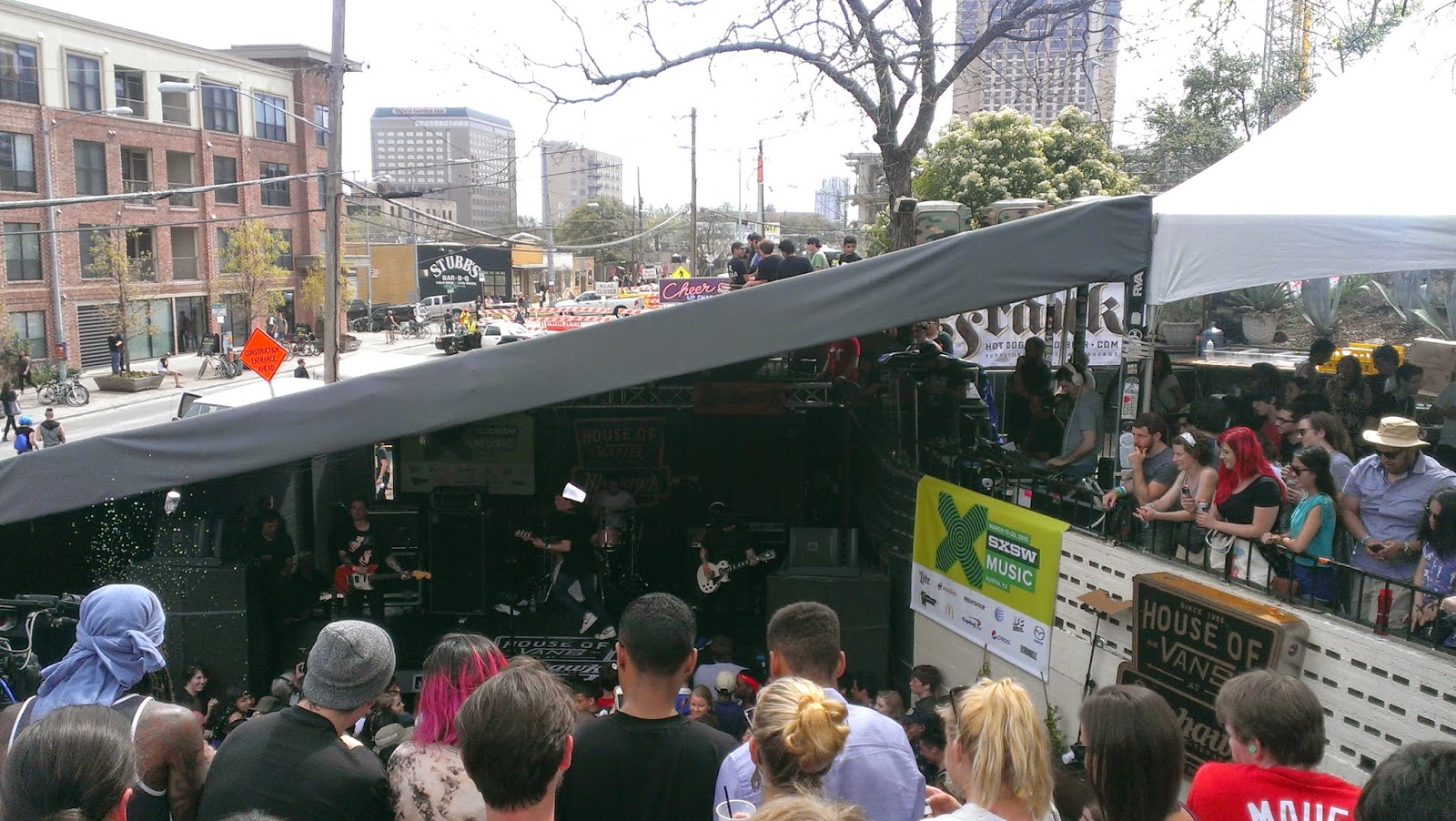 I then moved inside to catch Twerps, an Australian indie rock group. They split vocal duties between some sort of stoner bro guitarist and a rather unemotive woman guitarist/keyboardist. They gave off a laid back vibe, and even if their music wasn't very exciting, they did manage to reach some good places, which they were smart enough to hold on to for a long time, but not too long. It was just enough that they never got annoying. I caught a few snatches of great lyrics, such as the first lines they sung: "Are you wise enough to be in this bar? / Are you cool enough to be with the stars?" 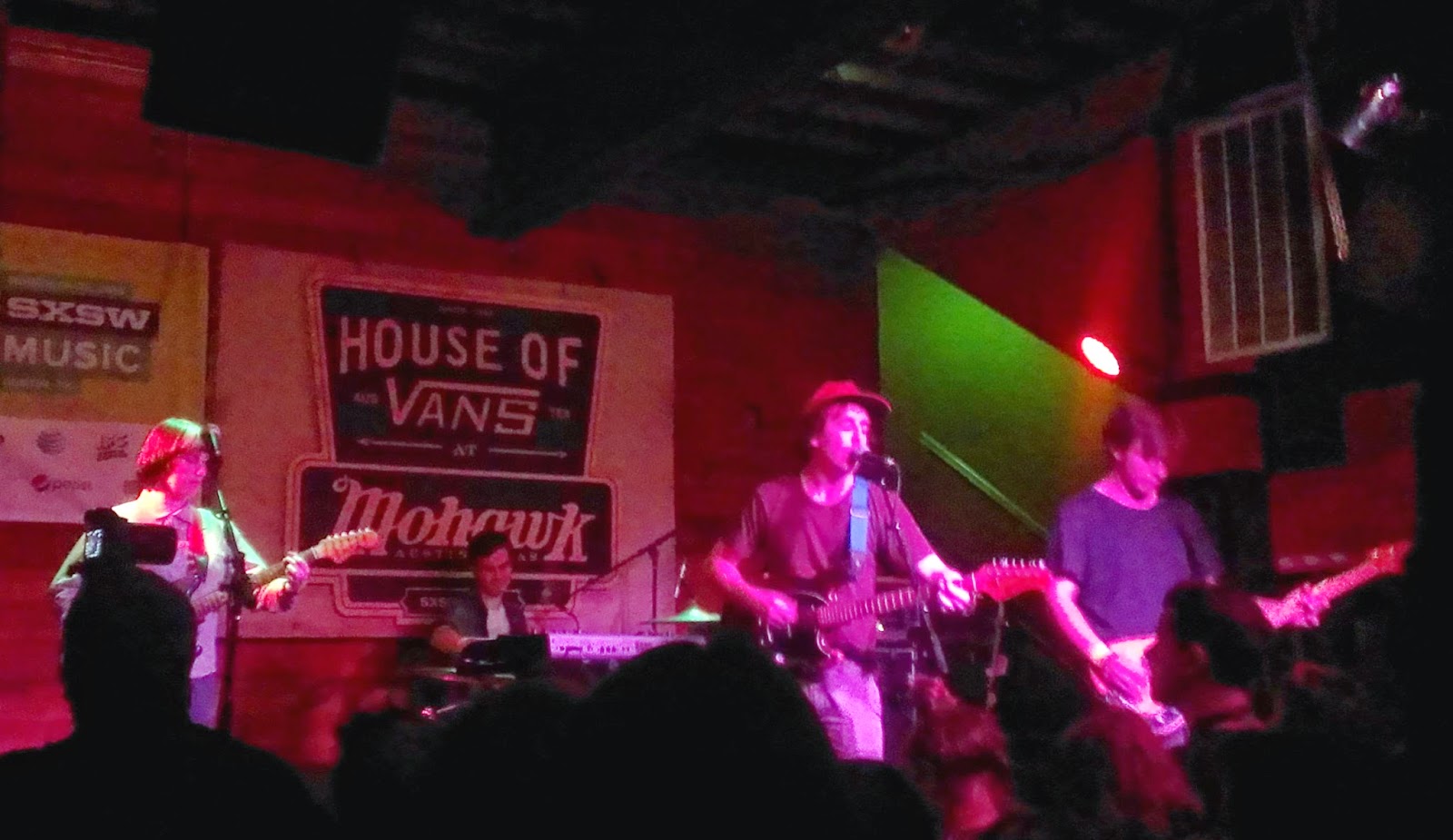 Last up on the inside was DJ Windows 98, also known as Win Butler of Arcade Fire. He came out in a bandana face mask along with two Haitian drummers. Win started DJing Haitian music with his laptop and soundboard while the drummers drummed. After the first song, a man in a gold bodysuit joined the crew, but I was never able to figure out exactly what he was contributing (or who he was). About halfway into the set, Win switched over to more mainstream American pop and hip-hop. The first part was great – there was a welcoming party vibe, and the percussionists were putting down great beats. But when the music transitioned, so did the quality level. The tunes weren't as good, the vibe changed to a generic club feel, and the drummers didn't really have as much to contribute. The highlight for the crowd appeared to be a mashup of Beck's "Loser" with Kanye West's "Jesus Walks" (which can be heard online). I don't think I understand live DJ sets. 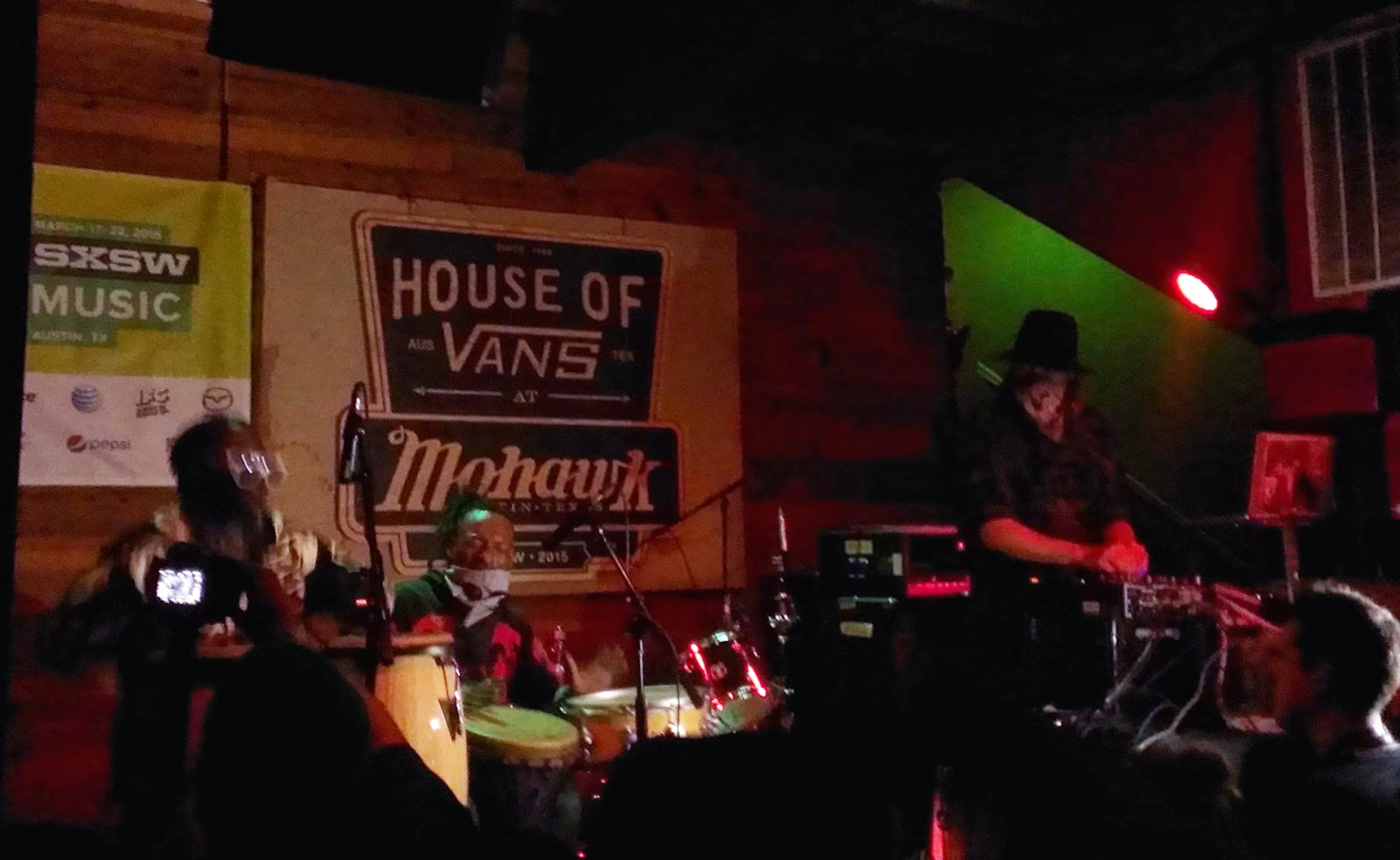 [DJ Windows 98 at Mohawk. The man in the gold suit is not pictured here. Sorry.]


P.S. Videos of songs from Hundred Waters, Alvvays, and Title Fight have been posted by Pitchfork.