Introduction: As previously mentioned, I've split this day into two parts, and this post will cover my evening spent at Hotel Vegas. Levitation, previously known as the Austin Psych Fest, sponsored showcases all day at the venue, starting with unofficial events in the afternoon, transitioning to an official SXSW event at 7pm, and running well past 1am. They ran three or four stages (depending on how you count): two separate ones inside, and one big one outside, which was loosely split in half so that one band could set up while another was performing. It was a little weird, but it mostly worked. I stayed outside and hung out for as long as I could.

I actually got there a little before the official events commenced, so I saw the end of a set by Deerhoof. I only saw enough to know that they certainly aren't your average band. They were trying to do an audience-interactive call-and-response thing in an odd time signature with stop-start rhythms. I'm amazed that it even halfway worked.

Then came the official showcases. First up was Think No Think, an Austin power trio. They had a little too much of a bro-ish cock rock vibe for me. They were far too invested in upholding rock 'n' roll cliché. They could play reasonably well, but they stuck to standard noisy, thrashy hard rock, the kind of stuff Led Zeppelin and The Who did much better once upon a time. They were big fans of their feedback to a point of excess. 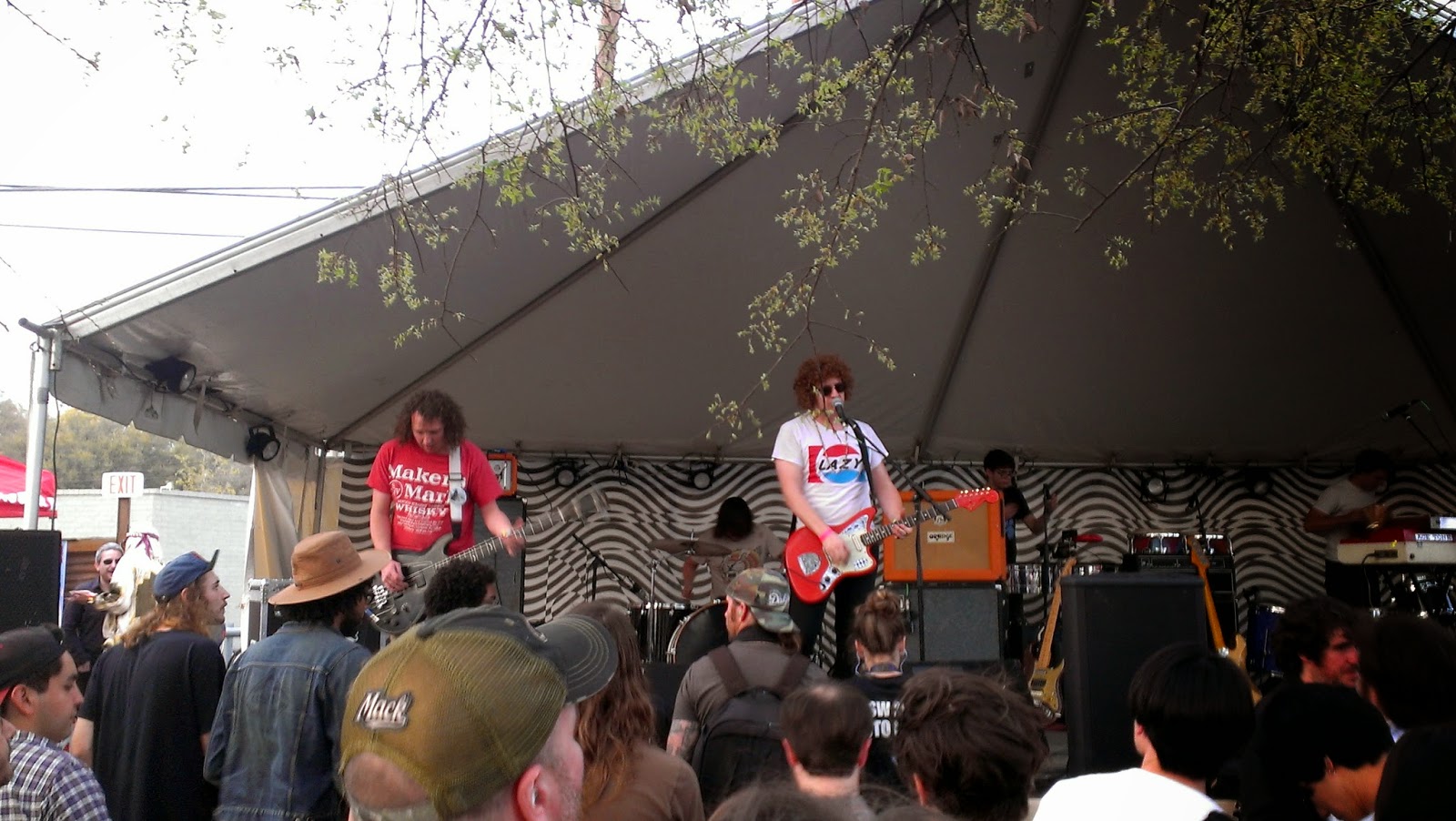 [Think No Think at Hotel Vegas.]

Golden Dawn Arkestra: This Austin band is apparently unrelated to the original 1960s Austin psychedelic band The Golden Dawn. They are, however, definitely psychedelic, but in a much, much funkier sense. I guess this is what is known as Afrobeat. This was some sort of really out-there, high-energy, post-apocalyptic, semi-mystical experience. I think there were fourteen people on stage, but it was hard to tell who counts as a member among the many people that were performing music, dancing on stage, and dancing through the audience. Everyone was dressed in some sort of cosmic outfit, there were props, there was a lot of percussion, and I think there was a heavy dose of Sun Ra influence. There were horns, there were hints of reggae, there was rhythm, and there was a lot of funk. There was also a lot of singing about unity and visions and awakening. It was great. 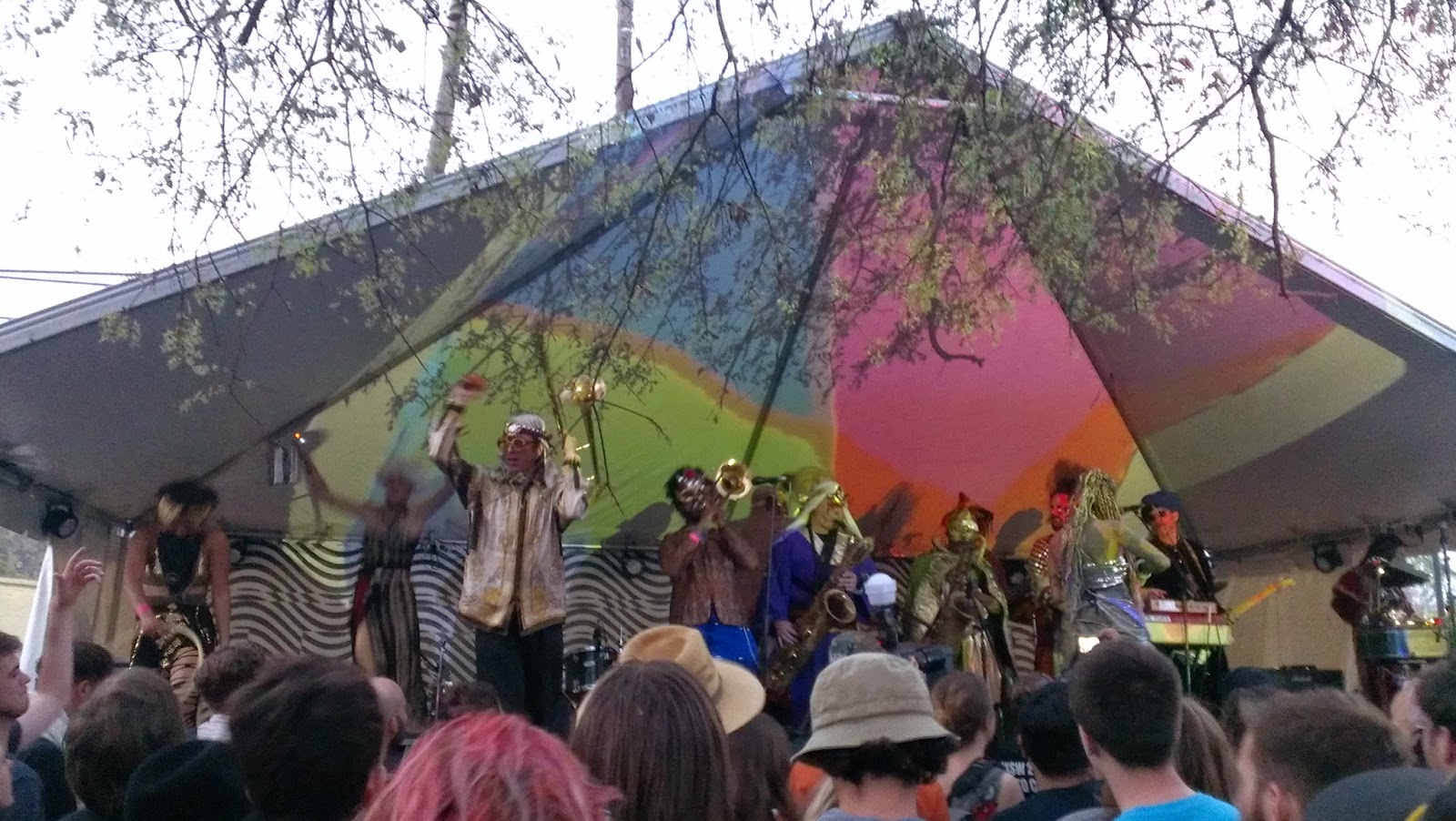 Holy Wave: An El Paso psych band. These guys were very much in the traditional vein of psych rock, with hippy hair and looks to prove it. Their music was fairly straightforward but easy to enjoy. Their guitarist somehow managed to break two strings in rapid succession, which put a bit of a damper on their energy level. 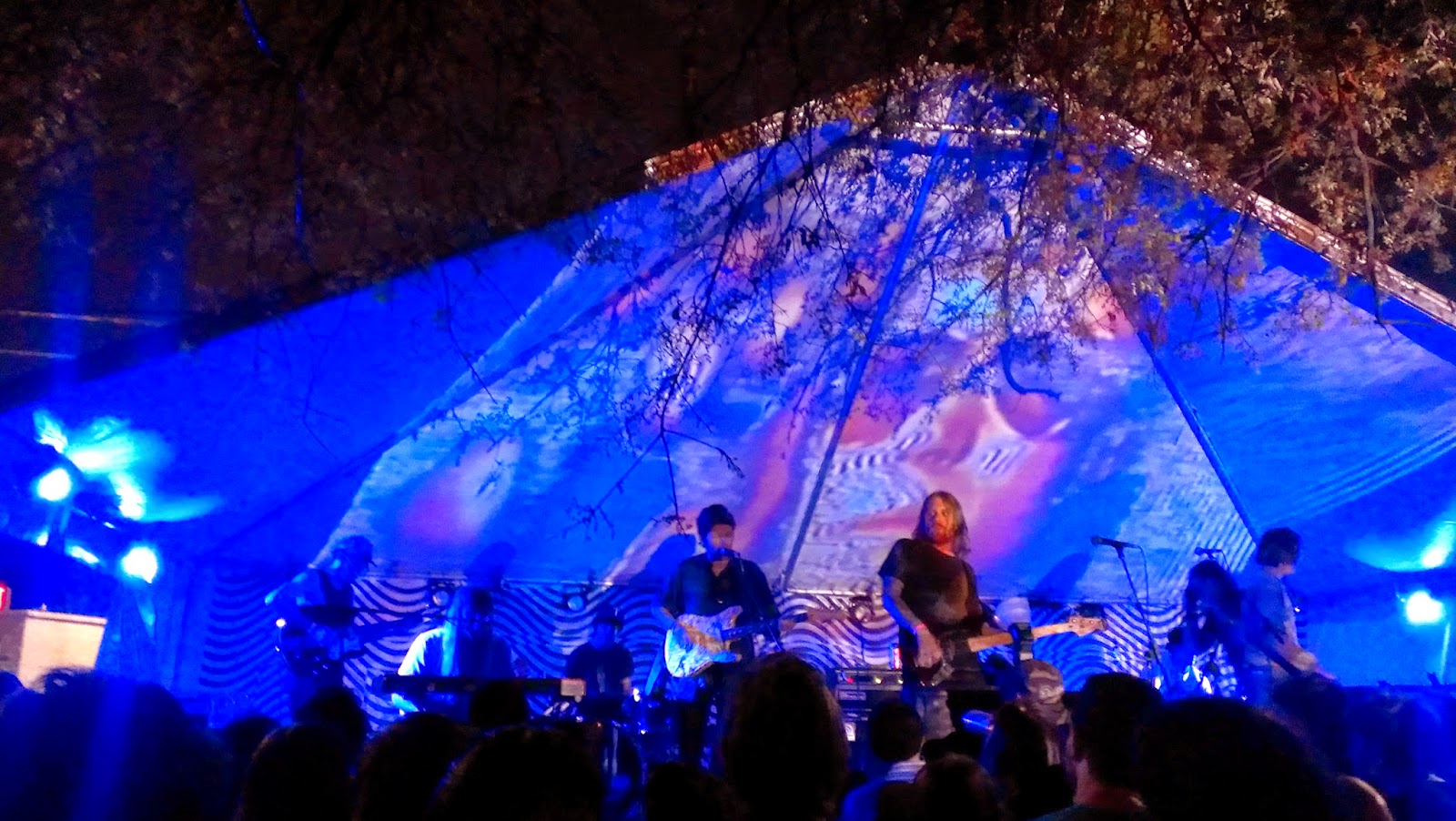 Merchandise: By now this band is an established favorite of mine. I can't get enough of their blend of Chameleons-style ethereality, quasi-industrial noise, and pop hooks. I was surprised to hear they were playing SXSW again, but I wasn't about to complain. Here's their setlist: 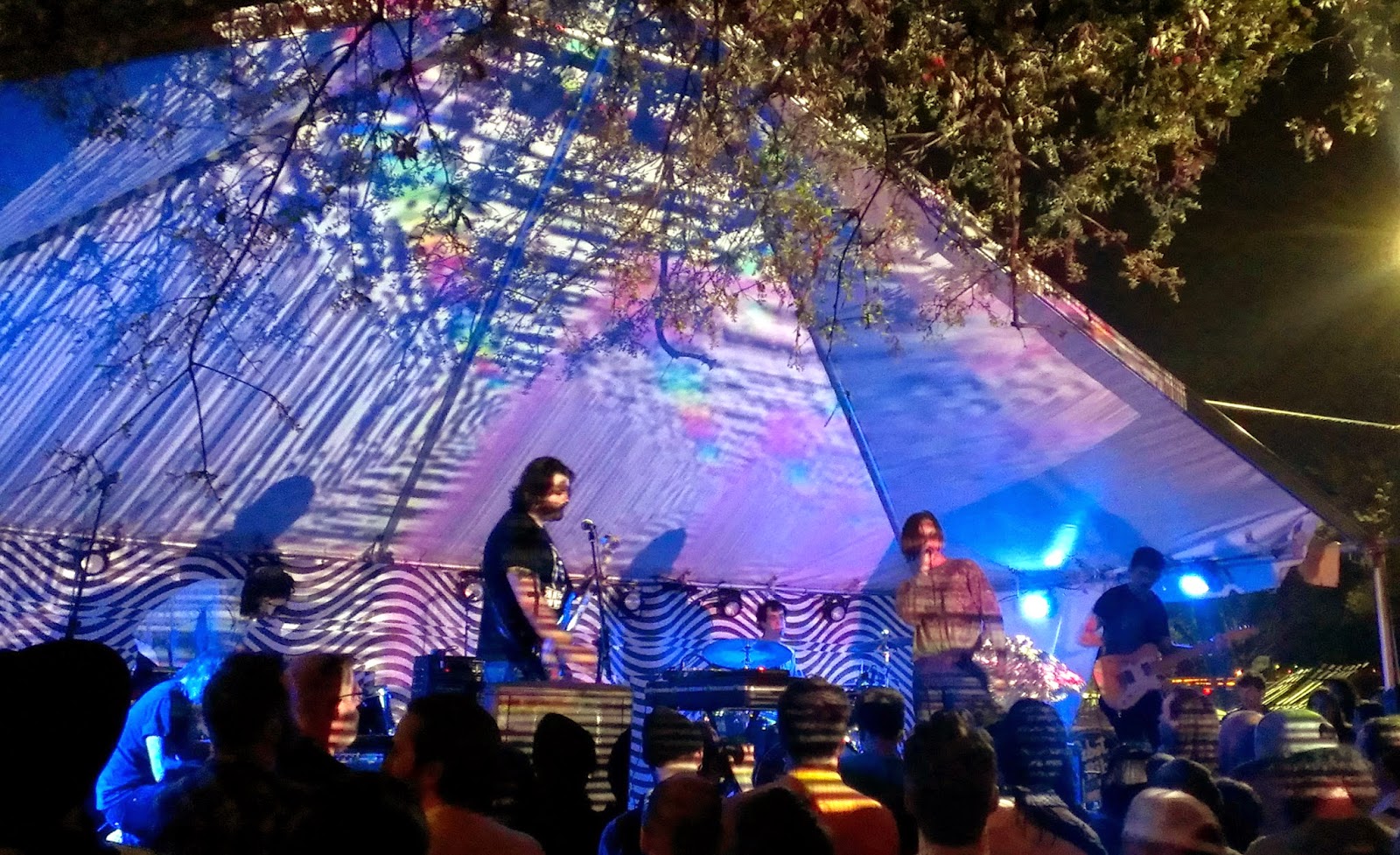 I still can't really figure out what was going on at the end. They started with a relatively weak song and then played three really awesome songs, so they were on a good path. But then they said they wanted to do something "special", so they brought out a guest and started some sort of dark, noisy jam. I can't even tell what the guest was doing – he was just holding some little device in his hands. Guitarist Dave Vassalotti spent most of the jam crouched down by his effects pedals, and although I couldn't see him, I think I could hear his instrument. The whole thing was very self-indulgent. At least the rest of the set had something going for it, even if Carson Cox's vocals had too much reverb and they used backing tracks in the absence of guitarist/keyboardist Chris Horn. [Edit 2016.03.30: After listening to a recording of the set, I think Cox was drunk or something.] 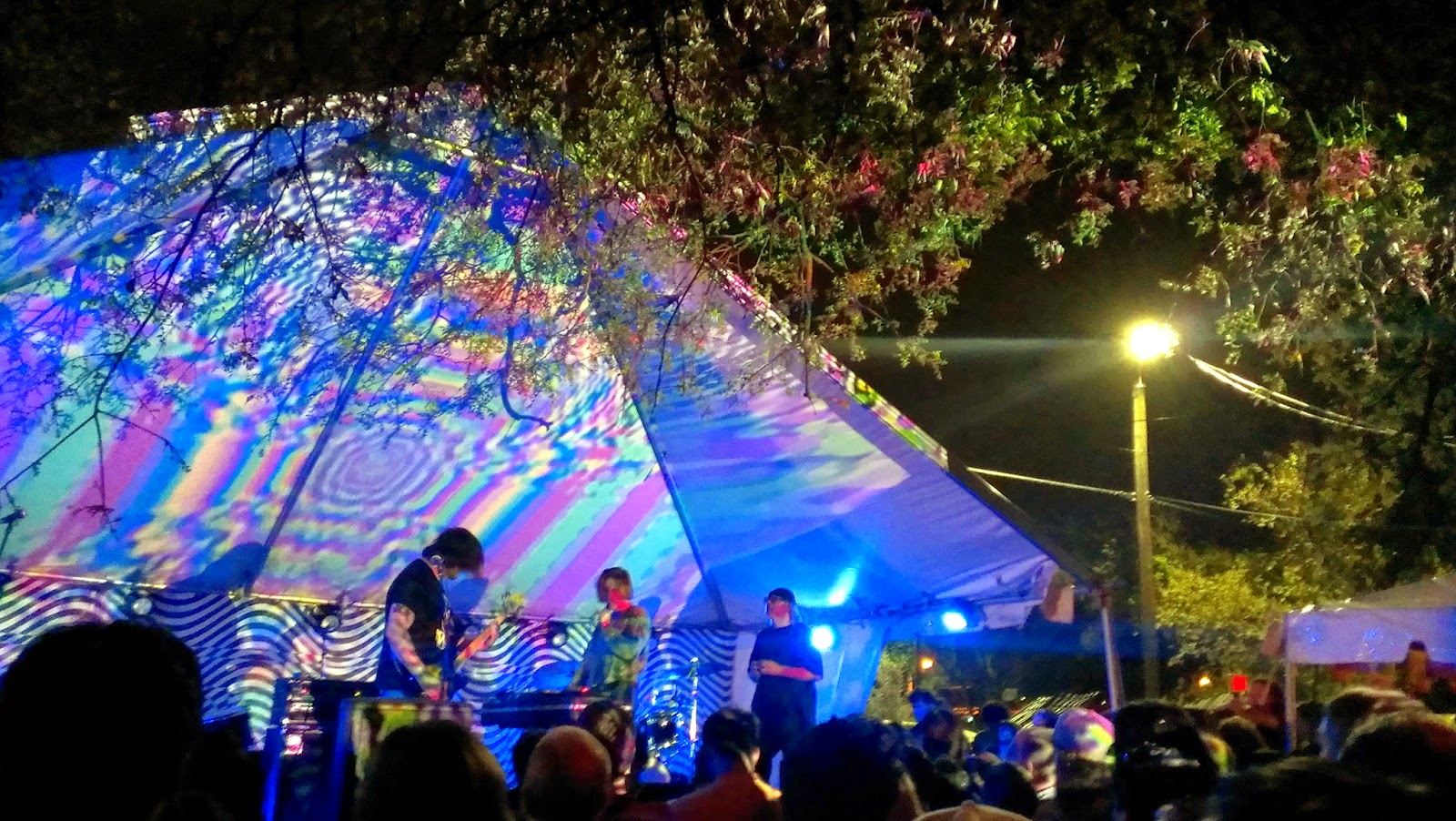 Moon Duo: This duo plus drummer psych/shoegaze band hail from San Francisco. They make a great space with the synth and drums, and the guitarist solos beautifully on top. There are vocals, too, but it's more likely that the listener will end up hypnotized by the music than told any sort of story. It did start to drag a tad, but on the whole I found it rather entrancing. 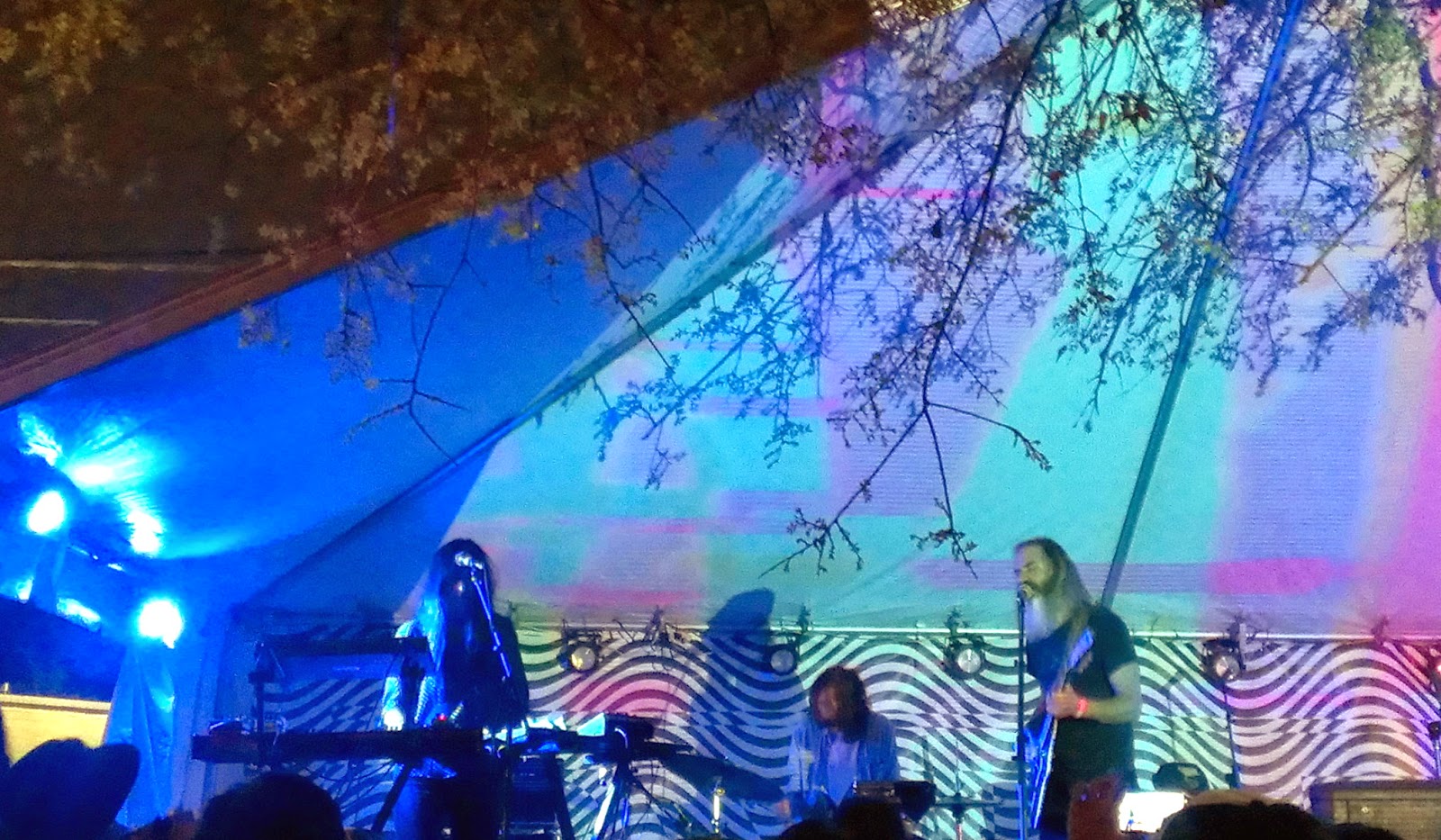 Songhoy Blues: This is a Malian "desert rock" group, exiled from troubled northern Mali but apparently making big waves (they are the first African band signed to Atlantic since 1972!). I've reviewed other desert rock bands from Mali and Niger that played major festivals in Austin (Imarhan Timbuktu at SXSW 2014 and Bombino at Austin Psych Fest 2014), and they've all taken different approaches, generally rather successfully. Songhoy Blues might just be the best band I've seen yet in this genre. Their style was very funky, very danceable, but also with a strong rock edge. The drummer was excellent, always offering energetic, syncopated rhythms; the bassist was really funky; the singer was charismatic and enthusiastic, even if I couldn't understand his lyrics; and the lead guitarist was simply on fire. He never slowed down! He just kept tearing it up, constantly playing amazing lines of lead guitar. It was an incredible experience to behold. 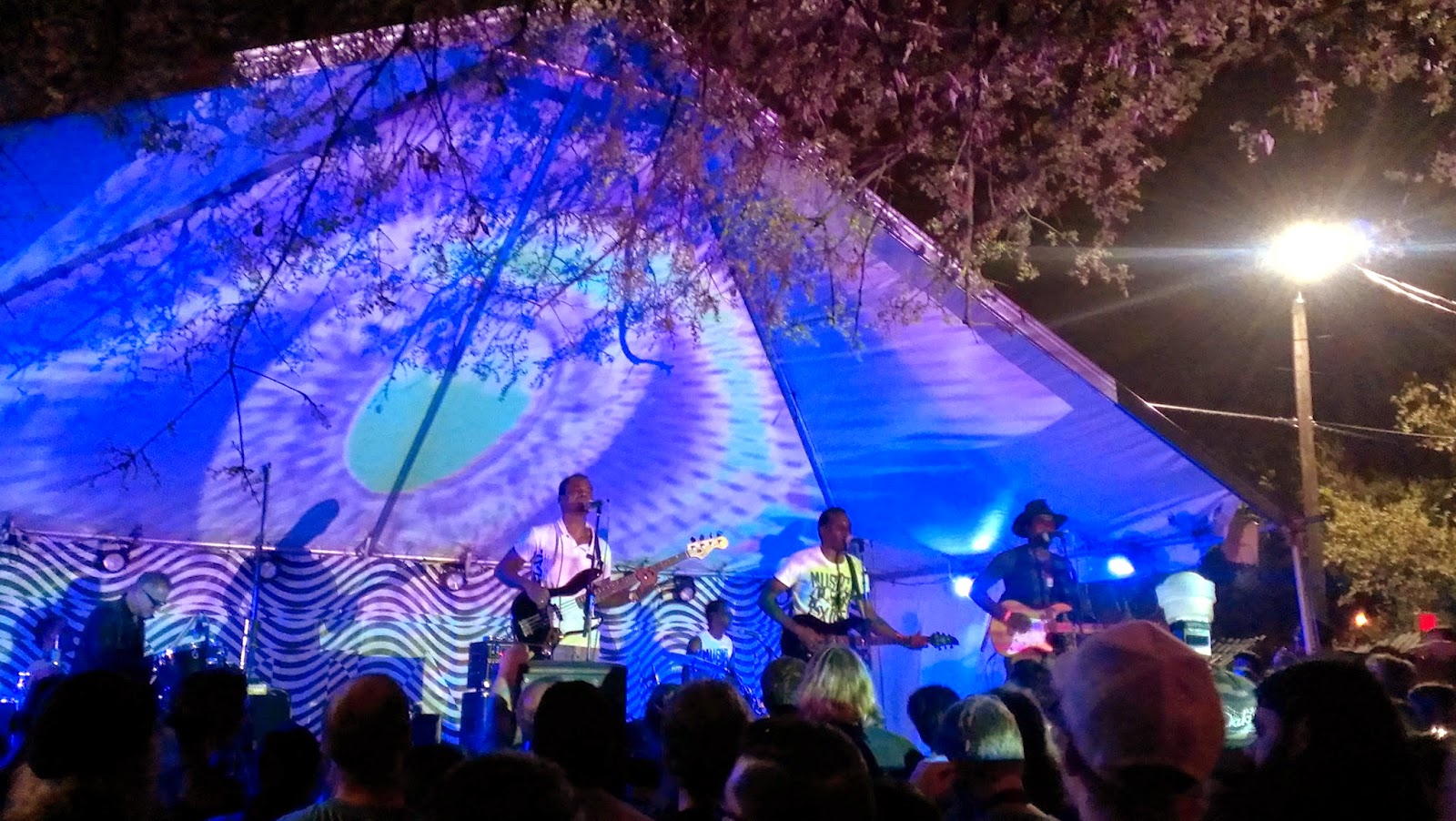 The Pop Group: Well known as the furthest thing from an actual pop group, I'm not even sure how I feel about them as a studio band. I bought Y in London in 2009 after years of hunting for it (it's never been released in the USA), but it's a bizarre album. They had three amazing singles, a few scattered other notable tracks, and a lot of extreme experimentation that wasn't always very successful or listenable, and then they broke up. Their new, post-reunion album (Citizen Zombie) has a few decent moments but is mostly not very good. I'd heard that they were best seen live, so when I saw a chance to do so, I wasn't going to pass it up. Sure enough, they delivered. Here was the setlist:

1. We Are All Prostitutes
2. Citizen Zombie
3. Thief of Fire
4. Shadow Child
5. She Is Beyond Good and Evil (cut mid-song)

Unfortunately, the band took forever to set up and soundcheck, despite the intended rapid-fire schedule set by the venue. I couldn't tell exactly what was wrong and who was on stage making demands. It seemed like someone with the venue was trying to fix a microphone feedback issue, but I think there were band associates making various complaints and demands as well. At any rate, the band took forever (relatively speaking) to hit the stage. But when they did, they did it with full force. Five aging men turned into a lurching, jagged, aggressive mass of energy. They rocked with an incredible force, as if they were struggling to contain it. They walked a line of being too much, too far, of being just about to fall apart and shatter into pieces – but they held it together as if they were strong enough to form the chaos into music.

Bassist Dan Catsis was incredible, forming the foundation of the sound with hard, angular funk. Mark Stewart's vocals were somehow surprisingly clear, even despite the mess of a soundcheck (or maybe because of it!), and the words all made sense, conveying a terrible feeling of socio-political frustration. "Thief of Fire" was a performance like I'd never seen before: brimming over, at the edge, barely contained. Even the new songs soared far above their studio counterparts. "She Is Beyond Good and Evil" was about to transcend space and time, but then suddenly the stage went dark and all sound was cut. The drums stuttered to a halt. Stewart, clearly enraged at the indignity, yelled at the sound crew to at least let them have a closing word with the audience, but the sound was not restored. Instead, spitefully, over the PA came Roy Orbison's "It's Over". Other attendees have suggested that they blew the circuit and lost power, but I am suspicious that an active role was taken by the venue. 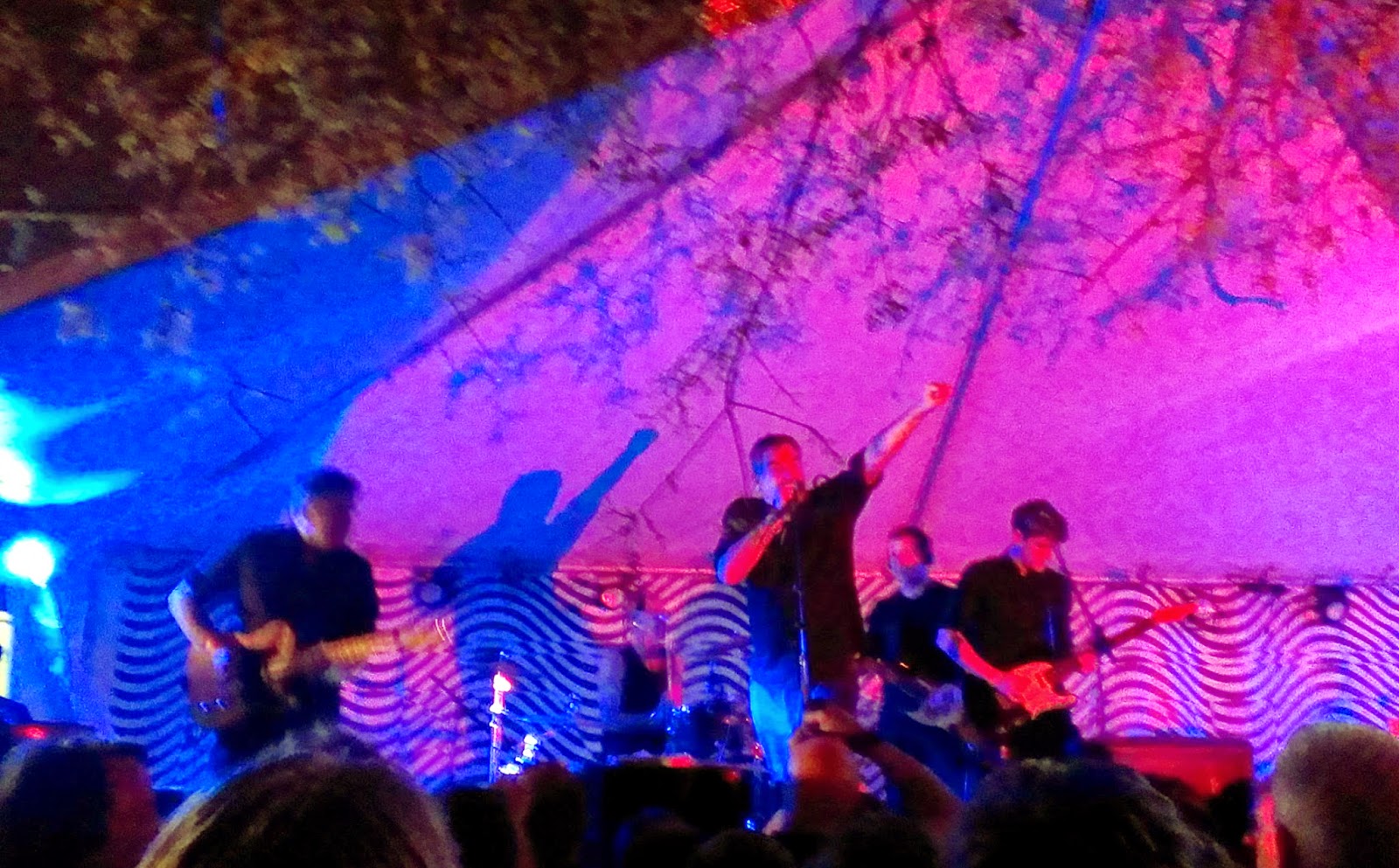 [The Pop Group at Hotel Vegas.]

Gang of Four: The Pop Group and Gang of Four make a great double-billing: two pioneering post-punk groups with extreme political bents; sharp, angular, and funky instrumentation; and careers that rose and fell in just a couple years. While The Pop Group never reunited between their 1981 breakup and their reformation in 2010, and their membership has hardly changed over those two periods, Gang of Four have had a much more complicated history. After hemorrhaging members and quality in the early 80s, the two remaining members (vocalist Jon King and guitarist Andy Gill) have periodically revived the band with various lineups from then until now. They managed to reunite the original lineup in 2004, but this only lasted until 2006. In 2012, even King left, but Gill refused to let the band go and has still carried on, now with a replacement singer, John Sterry.

Sterry might not be King, but at least he can approximate the vocals reasonably well. Gill still plays his guitar deftly, but the whole thing looked and sounded a bit odd. Bassist Thomas McNeice and drummer Jonny Finnegan are reasonably good musicians, but one can't but notice that Gill is quite a bit older than the other members, and he seems out of place in his own band. Gill, Sterry, and McNeice kept shuffling their positions on stage and trading microphones, and bizarrely, it appeared that Gill was repeatedly pushing Sterry around. One gets the impression all is not well and cordial within the band. It doesn't help that Gill wears a constant grimacing expression of scorn.

The performance was fairly good, but the newer songs are conspicuously of lower quality than the older ones. "To Hell with Poverty!" was a highlight of the set, but "Anthrax" came out a little weird. Gill and Sterry attempted to recreate the asynchronous dual-vocal parts of the studio version, but Gill's spoken part came out choppy and inconsistent. I guess it sort of worked, as far as reinforcing the disaffection and disillusion of the song, but it certainly didn't turn out as well as the studio version. Here's the full setlist:

1. Where the Nightingale Sings
2. Not Great Men
3. I Parade Myself
4. Anthrax
5. Stranded
6. Damaged Goods
7. To Hell with Poverty! 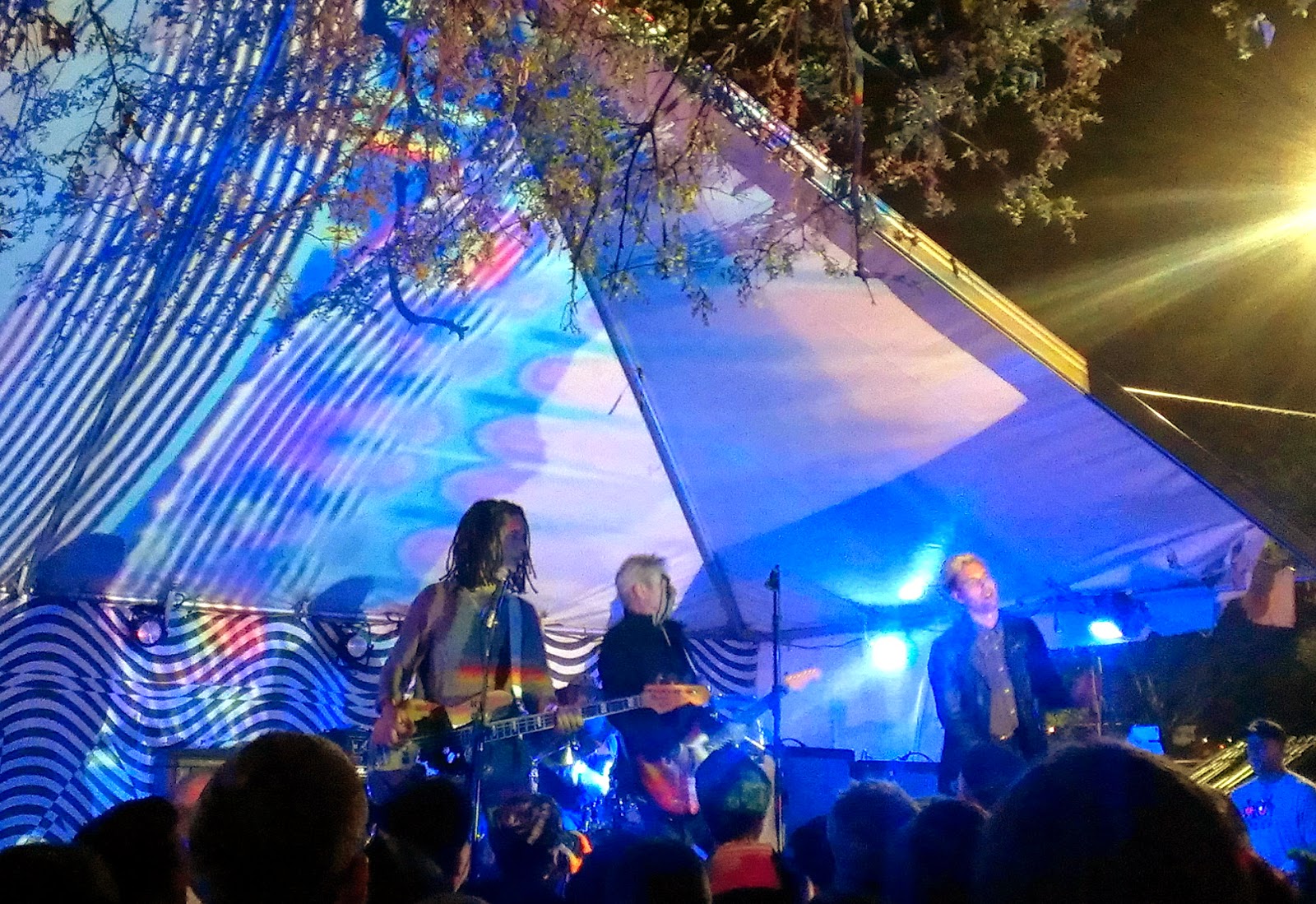 [Gang of Four at Hotel Vegas. Gill's sneer is partially obscured by the microphone silhouette.]

Scores:
Think No Think: D
Golden Dawn Arkestra: A
Holy Wave: B
Merchandise: C-
Moon Duo: B
Songhoy Blues: A
The Pop Group: A-
Gang of Four: B-
Posted by Patti at 2:59 AM