Introduction: What do I really need to say? Well, maybe one thing: this is likely to be my last SXSW for the foreseeable future. (More on that another time.) I'm excited to make the most of this one while I can. To that point, SXSW has conveniently made the preceding Monday part of the official music festival. It was a relatively quiet day, which is saying something, since Tuesday is usually rather quiet, too, but it was still cool to get to see a few things before the crowds overtook everything.

RF Shannon (at Spider House): My best description for this band is "shoegazer country". Somehow it actually works. The lead vocalist had just enough twang to be convincing without being annoying, and the pedal steel was so heavily effects-laden that it was hard to tell what exactly it was. It blended with the organ and piano so well that it was often difficult to discern what was what, but it didn't matter, because the sum output was beautiful. They were a bit slow-moving, and they risked losing focus, but they played a strong set. 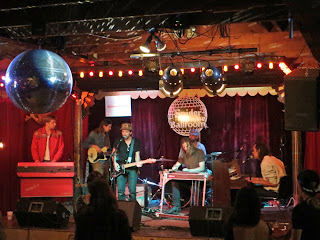 Hot Nut Riveters (at Spider House): A bizarre five-piece old-timey band that defies categorization. They had a manic intensity with offbeat humor and a pre-war sensibility. All members sang and played multiple instruments, including washboard, lap steel, accordion, double bass, assorted percussion, and uneffected electric guitar. Their songs were either standards (such as "This Land Is My Land") or semi-nonsensical. There was lots of banter and cross-talk, often even during the songs. They were hard to pin down and hard to stop watching. 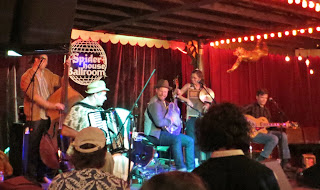 The Kraken Quartet (at Spider House): This group relied solely percussion and keyboard instruments to create a sort of jazz fusion. One member mostly played marimba, another mostly vibraphone, another mostly synthesizer, and all four played drums. There were no vocals, but they kept up an impressive set of complex rhythms for the whole set. I was left with a feeling like there was something missing, but I also found their limited instrument selection to be a compelling challenge. 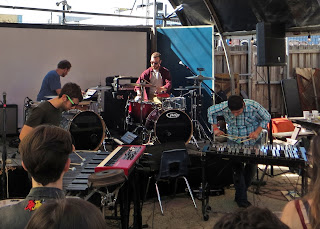 [The Kraken Quartet at Spider House.]

While ordering amazing tacos from Cool Beans, I caught glimpses of a couple other bands at Spider House before I left. Fragile Rock was another fantastically weird concept: puppet-based emo. I still don't quite know what to make of it. Meanwhile, funk ensemble Hard Proof was tearing it up, but I just saw them at Sound on Sound in November.

After a break, I went back downtown and went straight for the Moogfest showcase at Cheer Up Charlie's. It didn't appear that all the bands were actually using Moogs (not that that was actually requirement, as far as I'm aware), but they did have a couple instruments, including a theremin, set up on the patio for the curious to play with.

Professor Toon was the first band up on the outside stage, but I couldn't get into it. His beats were too basic and the lyrics didn't strike me as notable. I ended up back inside, where the Holladay Brothers had set up an installation of lamps synchronized to their laptop electronica. The music was chill but unrelenting and static. However, it appeared that they'd played for most of the afternoon and would be playing all night, too, so I suppose it isn't quite fair to complain too much about a lack of dynamics. I liked the visual concept, but it's also far from the first time I've seen something similar. 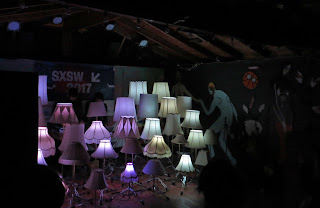 [Holladay Brothers at Cheer Up Charlie's.]

Madame Gandhi (at Cheer Up Charlie's): The solo act of M.I.A.'s drummer. She used samples and looping to build a bed for her raps, but spent most of her time behind a drumkit, behind which she continued to rap. She played in a way that augmented the sampled beats into something far more complex while still maintaining perfect rhythm with her voice. It was impressive. Her lyrics were unabashedly feminist (e.g., "the future is female") and I appreciated the care with which she addressed the topics at hand. 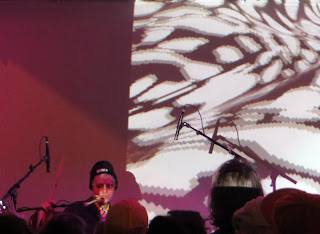 [Madame Gandhi at Cheer Up Charlie's. Not the best picture, sorry.]

Suzanne Ciani (at Cheer Up Charlie's): Her setup was just a large old-school synthesizer, seemingly the same type of setup she's been using since the 70s. She started strong with cool synth pulses, but as time went on, the music started to wander. At a few points, there appeared to be problems as no sound was audible but she continued to patch cables around. It didn't help that there was basically no visual aspect to the set. I was really excited to see her, but was ultimately bored and a bit disappointed. 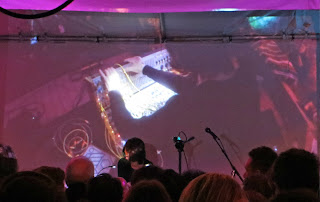 [Suzanne Ciani at Cheer Up Charlie's.]